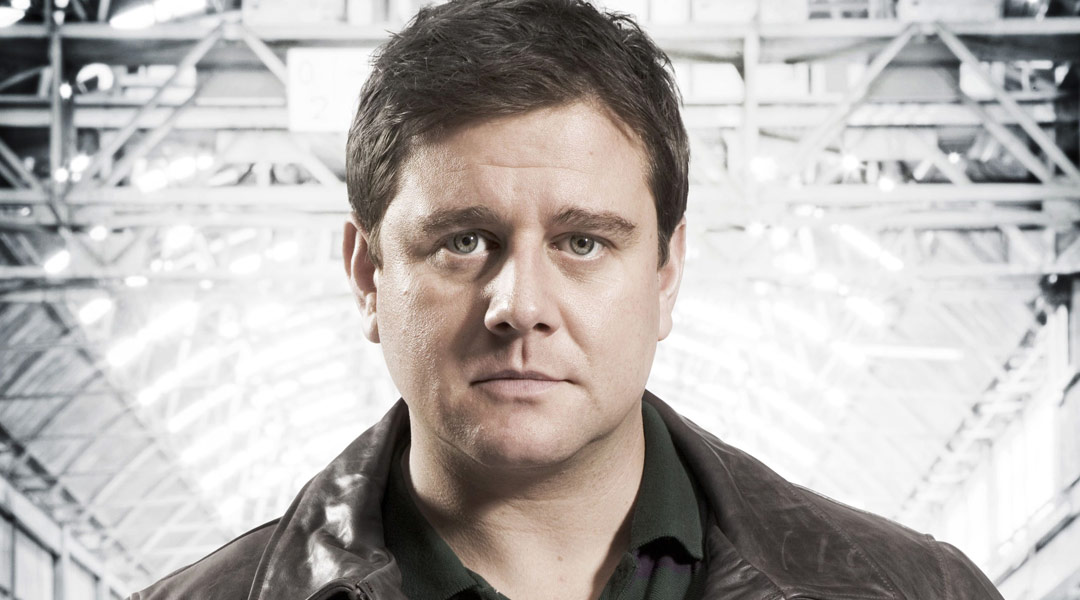 Gwen: What were you doing at that warehouse?
Rhys: You lied to me! You were at that crash!
Gwen: I don’t know what you’re talking about!
Rhys: Stop pissing me around, Gwen. You’re so used to lying and fobbing me off, like the idiot that I obviously am!

Gwen: All I ever asked was that you trust me.
Rhys: Like you trust me? It’s a two-way street, Gwen.

Rhys: What exactly do I need protecting from, huh?
Gwen: I catch aliens!
Rhys: Piss off!
Gwen: No, you piss off. It’s the truth.

Rhys: Have you been brainwashed? Is that it, yeah? Is that what’s happened? ‘Cause you are talking some high-grade shit here.

Rhys: Aliens? In Cardiff?
Gwen: Have you never seen something so mad, so extraordinary, that just for one second you think that there might be more out there?
Rhys: Prove it.

Jack: All you did tonight was mess things up. Now we have to think of a way to get back in and thanks to you they’ll have tightened security.
Rhys: Well if you’d stopped and asked me exactly what I saw in there instead of showing off about the place—
Jack: Do I show off?
Ianto: Just a bit.
Rhys: —you’d know that I got out by telling them I wanted a job as a delivery boy. So rather than cock things up I found you a way to get in. But if you can’t handle that, Big Boy, then you can stuff it.
Jack: This is quite homoerotic.
Gwen stepping in: No no no no… Jack, he is not getting us in.
Jack: Team meeting. {to Rhys.} You too.

Rhys to Jack: You’re not gay by any chance, are you?

Rhys: Do you remember that?
Gwen: No. It felt like the first time. But it was nice.

Barry Williams: Listen Rhys. Your mother says this wedding is becoming a nightmare. As if Gwen showing up pregnant wasn’t bad enough. You are sure it’s yours, aren’t you?
Rhys: Dad, I’m marrying her. I love Gwen. Every atom of me loves Gwen. Has done since the first time I laid eyes on her. Okay?
Barry: You loved Cerys Morgan once.
Rhys: I was twelve years old!

Gwen: We’re not stopping the wedding.
Jack: Gwen there isn’t a choice here.
Gwen: Ever since I met you, Jack, all Rhys has had to put up with me is crap. The lies, the dangers, the complications… but he stood by me. Who else would do that? Who else would marry me knowing that I am carrying some kind of monster inside me? I love him. And I am going to marry him today.
Rhys: Thanks. But it is my wedding too. Don’t I get a say?

Jack: Get back, you ugly bitch!
Rhys: What the hell are you doing? That’s my mother!
Jack: No! It’s the alien.
Brenda: I’m not an alien!
Jack: Oh, you’re good, I’ll give you that.
Brenda: But I’m not!
Jack: Yeah, and the Lone Ranger didn’t have a thing with Tonto.
Gwen: Jack, does the shape shifter copy smells too?
Owen: No. Just physical.
Gwen: Right well, I recognize that bloody awful perfume anywhere. It’s Brenda, Jack. It’s Brenda.
Rhys hits Jack: That’s for calling my mother an ugly bitch!

Rhys: Hey, are you all right?
Gwen: I’m running around in a wedding dress with what feels like a keg of lager stuck up my skirt. What do you think, Rhys?

Shape Shifter: Let me have my young and I won’t hurt you.
Rhys: You’re too late, it’s gone! I’ve had a gutful of you. You get my girlfriend pregnant, you impersonate mum, and you ruined my wedding day! {the chainsaw dies.} Fuck.
Shape Shifter: Rhys, you’re a bad boy. And you know what bad boys get! {she explodes.}
Jack: How’s that for a shape shift?

Gwen: I’m sorry. I know. I’m late.
Rhys: Three hours!
Gwen: It was a work thing. Time just got away from me. Oo, wine! We can do it another time though, yeah?
Rhys: This is the fourth “another time,” Gwen. You said you’d cook.
Gwen: Did I?

Gwen: How are we supposed to have kids with my job? Torchwood does not do maternity leave. “Oh, I’m sorry Jack. I’d love to help out with the aliens but I can’t get a babysitter.” “No no I’ll sort out that bomb once I’ve dropped Rhys, Jr. off at nursery.” Stop dancing around it. It’s a dead question.
Rhys: You know sometimes I fucking hate you. I mean look at you. Caught up in your little group like nothing else matters. And being a hero is an end in itself. Well it’s not. You saved the city. Well done. You saved the [?]. What for? I mean why are you doing it? What are you trying to protect? What are you fighting for?
Gwen: Because if I don’t, Rhys—
Rhys: Shut up. I’m talking now, right. You do it so people can live their lives. And there’s nothing more important than that. Falling in love, getting married, buying flats, having kids or not. But real life. That’s what you’re protecting. And if you’re starting to think that your shit is more important than real life then we’re not going to last very long here, love.

Rhys: Did you just say “Time Agency”? Don’t tell me that’s based in Cardiff too.

Andy: Rhys, what are you doing here? This is a crime scene, and a confidential crime scene at that. If it gets out what happened here they’ll be a city-wide panic.
Gwen: Rhys isn’t going to blab.
Rhys: I’m keeping more secrets than you’d ever believe.
Andy: Yeah right. Like what?
Rhys: Like a Time Agency based in Cardiff.
Gwen: Oh, it’s not based in Cardiff.
Andy: Brilliant secret. I ask, you tell. Well done.

Rhys: Bloody impressive, eh?
Andy: She is that. Lucky sod.

Rhys: Bloody hell. How many were there? It’s like Fort Apache the Bronx, innit?
Andy: Apart from the fact that surrounding forces are savage aliens and we all could die, it’s almost exactly the same, yeah. Thanks for that.

Rhys: What happened? Where’ve they all gone?
Andy: Abergavenny?