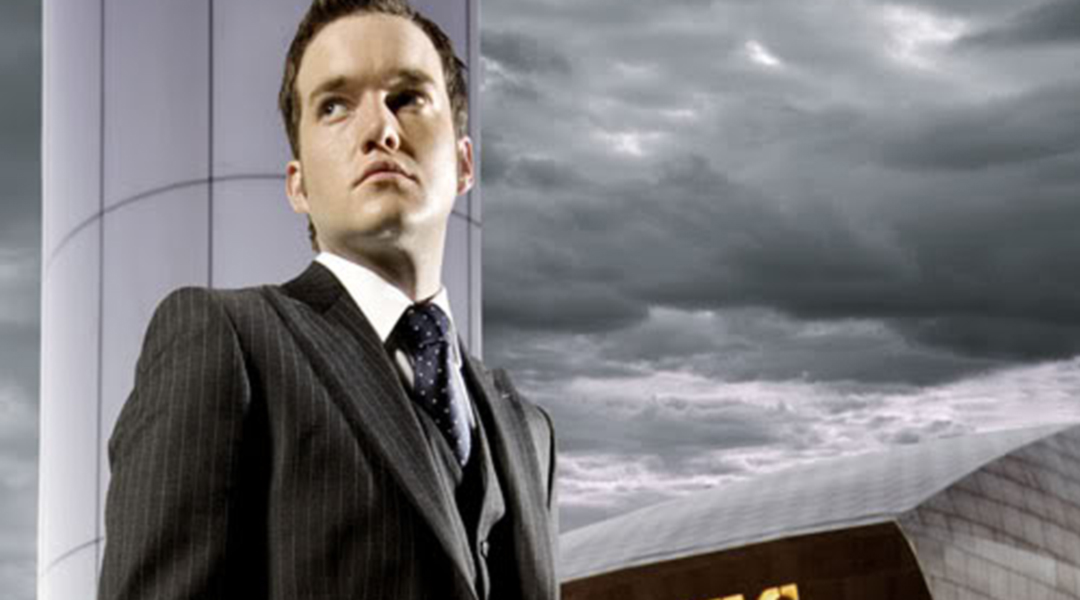 Jack: Owen Harper, Gwen Cooper.
Owen: Dr. Owen Harper, thank you.
Jack: Toshiko Sato, computer genius. Suzie Costello. She’s second-in-command. And this is Ianto Jones. Ianto cleans up after us and and gets us everywhere on time.
Ianto: I do my best.
Jack: And looks good in a suit.

Gwen: You don’t know anything?
Owen: Not who he is, not where he’s from. Nothing, except him being gay.
Gwen: No, he’s not. Really, do you think?
Tosh: No. Owen does. I don’t.
Ianto: And I don’t care.
Owen: Period military is not the dress code of a straight man.
Gwen: I think it suits him. Sort of classic.
Tosh: Exactly! I’ve watched him in action. He’ll shag anything if it’s gorgeous enough.

Ianto: Can you make it two pepperoni feasts tonight. And a tub of coleslaw. My boss says I’m not eating enough vegetables.

Dr. Tanizaki: My god. It’s not possible. One of them survived!
Ianto: This is Lisa.

Dr. Tanizaki: Tell me, what happened?
Ianto: She worked for Torchwood London. It was the end of the Canary Wharf battle. The Cybermen needed soldiers fast. They started upgrading whole bodies instead of transplanting brains, using earth technology. Lisa was halfway through the process when the machine was shut down.

Ianto: Her name’s Lisa. She’s my girlfriend.
Gwen: Why didn’t you tell us? We could have helped you.
Ianto: Torchwood exists to destroy alien threats. Why would I tell you about her?

Jack: You shouldn’t be here.
Ianto: Neither should you.
Jack: What have you got?
Ianto: Funny sort of weather patterns.

Tosh: This is the youngest girl and the girl’s cousin.
Ianto: I blame it on magic mushrooms.
Jack: What you do in private is none of our business.

Ianto: You know, I never liked camping. Don’t bother. They took the guns.
Toshiko: Charming place they’ve got.
Ianto: Judging by the sound reverberations and the… air quality… pretty deep underground. Chances of rescue?
Toshiko: We won’t need rescuing. I haven’t met a cell yet I couldn’t get out of.

Ianto’s thoughts: Can’t imagine a time when this isn’t everything. A pain so constant. Like my stomach’s full of rats. Feels like this is all I am now. There isn’t an inch of me that doesn’t hurt.

Gwen: Wait a minute, I’ve taken retcon.
Jack: Then better stay away from sharp objects. Ianto, how many people have we given amnesia pills to?
Ianto: Two thousand and eight.

Owen: Ay, what if they all become psychotic?
Tosh: Do you have to sound so happy?
Owen: Yeah, I’m just saying. Mean Streets!

Owen: You know, we never gave it a cool name.
Tosh: I thought we called it the Resurrection Gauntlet.
Owen: Cool name.
Ianto: What about “The Risen Mitten”? I think it’s catchy.

Ianto: Amazing. She’s a natural. 24 seconds.
Owen: Give Ianto a stop watch and he’s happy.
Ianto: It’s the button on the top.

Owen: Have you got your stopwatch?
Ianto: Always.

Ianto: Um, excuse me. I’m still counting.
Owen: There’s not much point. Suzie’s dead.
Ianto: No. According to your equipment, she’s just unconscious.

Ianto: If you’re interested, I’ve still got a stopwatch.
Jack: So?
Ianto: Well. Think about it. Lots of things you can do with a stopwatch.
Jack: Oh yeah. I can think of a few.
Ianto: There’s quite a list.
Jack: I’ll send the others home early. See you in my office in ten.
Ianto: That’s ten minutes. And counting.

Ianto: Oh, Jack? What do you want me to say on the death certificate?
Jack: Good question.
Ianto: She had quite a few deaths in the end.
Jack: I don’t know. “Death by Torchwood.”
Ianto: I’ll put a lock on the door. Just in case she goes walking again.
Jack: Nah. No chance of that. The Resurrection Days are over, thank God.
Ianto: Oh, I wouldn’t be too sure. That’s the thing about gloves, sir. They come in pairs.

Diane Harris amazed at the door opening: How did it do that?
Ianto: It’s automatic. It knows you’re there.
Diane: But how?
Ianto: There are wave bouncing detectors which emit high-frequency radio waves and then look for reflections—
Diane: Bananas!
Ianto: Of course bananas are far more interesting.

Emma: How much food money have I got left?
Ianto: Fifteen pound 40. totaling up her candy haul. Twelve pounds 10. You’ll ruin your teeth.
Emma: You sound like my mum.

Ianto: Open the Rift now and the whole world could suffer. We could all get sucked in. Who knows what will come out. This is about Diane, isn’t it? When will you accept that she chose to leave you?
Owen: Whereas your cyber-girlfriend stuck around. Of course, not that she had a choice, wired-up in the cellar.
Ianto: That was different.
Owen: Yeah, it was. Mainly because Diane didn’t try and kill us all and, oh yeah, she also happened to be a human being.
Ianto: Stop it.
Owen: Not some screwed-up metal monster.
Ianto: I thought she was still Lisa. I loved her. You only knew Diane for a week.
Owen: And it wasn’t enough. Maybe the Manipulator can calculate the missing figures. It isn’t working.
Ianto: Good. Jack would never have wanted us to use it this way.
Owen: There’s a piece missing. We’ve got to find it.
Ianto: Maybe you should go home.
Owen: You don’t have any power over me. Okay, Ianto, we’ll play it your way. Safe and boring.

Ianto: You can’t open the safe. You’ve got no right.
Owen: I’m second-in-command. I have got every fucking right.
Ianto: There’s stuff in there we don’t know about. That’s how Jack likes it.
Owen: I’m not going to play with his toys, Ianto!

Owen: There’s instructions in here. This isn’t a random act of madness.
Ianto: It’s a trap! Bilis wanted you to find it.
Owen: Why?
Ianto: To provoke the Rift. To incite total chaos and destruction. All the reports of the haunted dance hall were anonymous. What if it was him? Please listen to me!
Owen: I’m tired of being in awe of the Rift. I’m tired of living with Jack’s secrets. We don’t even know who he is.
Ianto: He’s our leader.
Owen: Not anymore.

Ianto: You have to let Diane go. Like I did with Lisa.
Owen: Don’t compare yourself to me. You’re just a tea boy.
Ianto: I’m much more than that. Jack needs me.
Owen: In your dreams, Ianto. In your sad wet dreams when you’re his part-time shag, maybe. That Rift took my lover and my Captain. So if I die trying to beat it, then it will all be in the line of duty.

Owen: World didn’t end after all, did it? Good job you’re a crap shot.
Ianto: I was aiming for your shoulder.

Gwen: You bring him back.
Jack: No.
Gwen: The Resurrection Gauntlet.
Ianto: Was destroyed.
Gwen: Well, there’s gotta be something you can do, otherwise what’s the fucking point of you!?