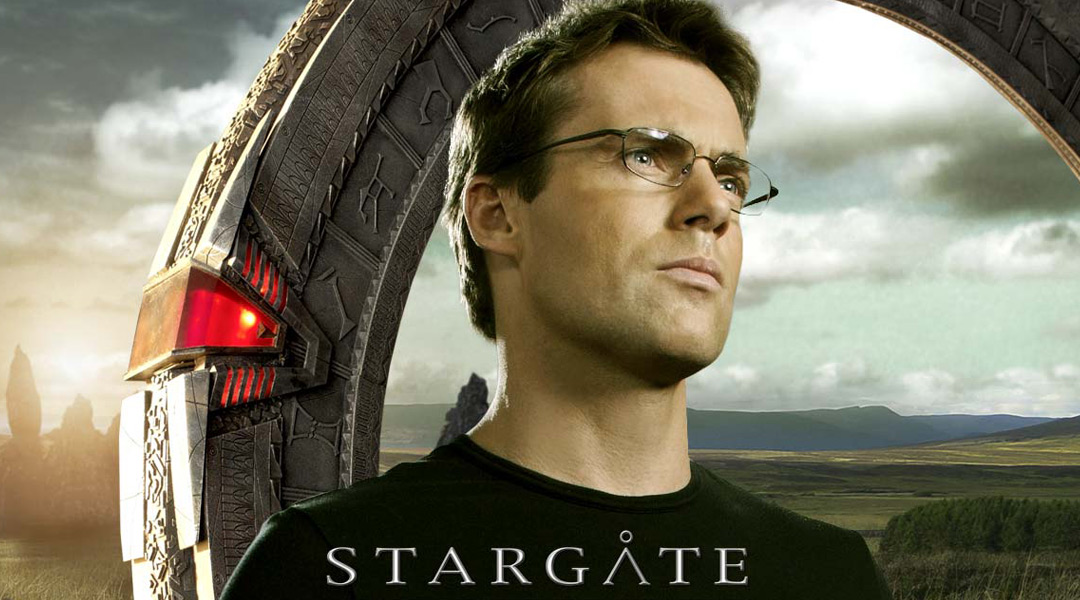 Vala: You know, I never thought I’d agree with my father but now I’m starting to remember about how he used to go about, you nurture them, and you raise them, and you teach them the best that you can, and then all they do is break your heart. I always assumed that his experience was just tainted by me.
Jackson: What are you talking about?
Vala: Wow. She started off all sweet and innocent and now she’s hell bent on domination of the galaxy.
Jackson: What? How old is she?
Vala: A few hours. The Ori used me to sneak one of their own over the border.

Jackson: This is bad.
Vala: You’re telling me. Origin is about to become much more appealing to the males of this galaxy.

Vala is off to use Jackson’s computer to study for her psych test
Jackson: I said no. And you can’t access it without my password!
Vala: Already got it, thanks!

Jackson: There’s something else going on.
Vala: What?
Jackson: It shouldn’t have worked.

Jackson: You chose your words very carefully when you said the first “human” to set foot in the city. What about ascended beings? {silence from the Archives} You’re not really a hologram, are you?
The Archive: You have your answer, Daniel Jackson. I suggest you act on it.

Jackson: I know you’re still here. There’s no point in hiding!
Vala: I don’t think she’s coming back, Daniel. Especially if you shout at her.
Jackson: Oh yes she is. She’s going to finish what she started.

Dr. Weir: Dr. Jackson. Hi. Who are you talking to?
Jackson: Well I don’t know what she’s calling her self these days, but at one point in history her name was Morgan la Fey.
Dr. Weir: Morgan la Fey was here?
Jackson: Posing as a hologram, yes.

Landry: You don’t think you can control her?
Mitchell: Sir, I know I can’t control her, but that’s pretty much par for the course. Sir, Carter and I are the same rank, Teal’c’s an alien, Jackson’s a civilian. I learned a long time ago I don’t control anything.
Landry: Who does.

Jackson: You’re making a big mistake. More Ori ships will be here soon.
Jaffa: Then they will suffer the same fate.
Adria offscreen: I think not. {She uses telekinetic powers to strangle him}
Vala: Adria?
Adria: Hello, Mother.

Bra’tac: She displays the wisdom of a battle-seasoned warrior.
Jackson: She’s a mother. Close enough.

Jackson: Dinner tonight is my way of saying thank you. Thank you for proving me right when I said we could take a chance on you.
Vala: I don’t know what to say.
Jackson: Just say what you were going to say before I interrupted.
Vala: Okay. I need to use the bathroom.

Carter: A member of this facility gets kidnapped unchallenged. It’s no wonder he doesn’t think we can protect him.
Jackson: But we can protect him.
Carter: Yeah, by locking him away for the rest of his life.
Mitchell: What can you say. There’s a downside working for super villains.

Vala: Get out of my way or I will shoot you.
Jackson: You don’t remember who you are but I do. You won’t shoot.

Mitchell: Yep. She’s a real beauty.
Vala: Stabilizers are a bit wonky, I’m afraid. Makes for a bumpy ride. But it’s all perfectly safe.
Mitchell: Really?
Vala: Not exactly.
Jackson: We gave you as much raw naquadah as you needed and all you came up with was this piece of junk?
Vala: People’s lives are at stake, Daniel. Do you honestly think that I cheaped out on the ship and pocketed the difference? an alarm goes off
Mitchell: What’s that?
Vala: Life support seems to be failing. {to Teal’c}. Can you take over? She changes crystals and the alarm stops
Mitchell: Great, you fixed that. How about fixing the stabilizers?
Vala: I didn’t fix it. I just disabled that annoying alarm.

Jackson: Don’t worry, Sam. It’s all part of the plan.

Carter: What’s your plan?
Jackson: We don’t have one.

Anateo: Dr. Jackson. Vala. Just wanted to let you know that your duplicity has already forfeited Colonel Carter’s life. Unless you surrender immediately, the rest of the crew is next.

The Quest : Part One

Mitchell: Hey Jackson, what are you doing?
Jackson: Oh, just trying to figure out the location of Merlin’s weapon so we can find it in time to defeat the Ori, hopefully save our galaxy. You?
Mitchell: We’re going for Szechuan. Wanna come?

Jackson: We should probably prepare to return fire.
Officer: For the record, I’m always prepared. I just have to press this button here.
Jackson: Right. I just, I thought that’s what you’re supposed to say.
Officer: I know.

Jackson to Adria: Well I guess I’m not as true of spirit as you thought I was.

Mitchell: Hey, you got anything?
Jackson: No. You?
Mitchell: No. But I’m getting a good tan.

About the Sangraal
Mitchell: It’s the real thing this time, right?
Jackson: I don’t see why not.
It’s still a hologram
Carter: Oh come on!

Line in the Sand

The Road Not Taken

Jackson: Okay, this is not necessary.
Mitchell: No offense, but have you looked in the mirror lately?

Jackson: …so I could steal an Ori ship and fly through the supergate with an Ori weapon on board and destroy them.
Carter: Okay. Uh. One small flaw in your plan.
Jackson: I know. There’s a wormhole blocking the supergate, and that’s why I’m here. I need you guys to shut it down.

O’Neill: This is new.
Jackson: Yeah it’s always something, isn’t it?
O’Neill: Gotta tell ya, though. Not your look.

Jackson: Jack, you have to believe me.
O’Neill: Why?
Jackson: Why? Well, because, I don’t know, the fate of the galaxy hangs in the balance?
O’Neill: You know, that old chestnut’s getting a little… old.

Richard Woolsey (Robert Picardo): I assure you, this may be the hardest decision I ever make. But I take full repsonsiblity for it. Based on my recommendation, the IOA has proposed to the President that Daniel Jackson’s life be terminated. Immediately.

Vala: That little weasel man who somehow represents your government.
Jackson: Woolsey?
Vala: I can’t be certain, but I think he might not like you.
Jackson: He wants to have me killed, doesn’t he?
Vala: Oh, I’m not sure how serious he is. He seems quite the prankster to me.

Jackson: Merlin’s gone. He sacrificed himself for it to work.
O’Neill: Yeah? Prove it. {Daniel waves his hand at him} What the hell was that?
Jackson: If I was Merlin you would know.

Bounty Hunter: Should have taken my first offer, Dr. Jackson. It would have been far less painf— {she gets hit by a bus}.

Mitchell: If they found the Gate they most likely found the DHD.
Jackson: We didn’t.
Mitchell: Well they knew enough to build a pretty convincing replica.

Jackson: We can always dial the Gate manually.
Mitchell: Right. Kick it rotary-style. We still need a power source. What about the MALP?
Jackson: Nope.
Mitchell: Seaweed?
Jackson: Don’t go there.

Jackson: Once we start posing as kidnappers, there’s no turning back, and if we get captured, we are hooped.
Mitchell: Jackson. I hear what you’re saying. But I don’t think we have a choice.

Sylvana: Oh please. You’re not rebels. We’re not deaf you know. Everyone in this room knows it.
Jackson: That doesn’t matter. You’re hostages! We’re your captors. We’re heavily armed. There’s rules. There’s a whole school of etiquette to this. Don’t eyeball me.

Mitchell: So I was thinking, we could zat him, toss him in a holding cell until he comes to his senses.
Vala: I was thinking it’s not too late to go with him.
Jackson: I offered. He doesn’t want us to.

Vala: Hello Gorgeous! If you’re watching this you’re obviously back at Stargate Command. And you’re probably thinking everyone around you has gone completely wonko. With the exception of Daniel who, let’s face it, was always a little bit—
Jackson off screen: Vala!

Vala: So…. No IOA? No Reynolds’ men? No television program about dancing with supposed celebrities?
Jackson: Actually that part was real.
Vala: How very disturbing.
Carter: Yeah.
Jackson: Mm hm.

Jackson: I told you to bring something to amuse yourself. I didn’t mean me. Or the crew.
Vala: They won’t believe that it’s my birthday. Again.
Jackson: Not my problem.
Vala: Being stuck on this ship is worse than being stuck at SGC. I tell you last time I was this bored I took hostages.
Jackson: I was there.

Vala about the Asgard: Out of curiosity, how do you tell the difference?
Jackson: The voice.

Jackson: Why are you doing this? You always resisted in the past, you always said we weren’t ready.
Thor: Indeed. Many Asgard still believe that.
Mitchell: So what’s changed?
Thor: As a race, we are dying. Very soon we will all be gone.

Teal’c: So everything they’ve installed on this ship?
Jackson: Is going to be their legacy.

Jackson: We can’t sacrifice the knowledgebase of the Asgards. They trusted us with their legacy.

Vala to Jackson: I’m gonna go crazy. And I’m taking you with me.

Vala: We’ve been here three months, Daniel. Three. Months. You do like girls?
Jackson: Yes!
Vala: Well I don’t see many other options around here, do you? Unless you really don’t find me attractive.
Jackson: Do you want an honest answer to this question?
Vala: No.