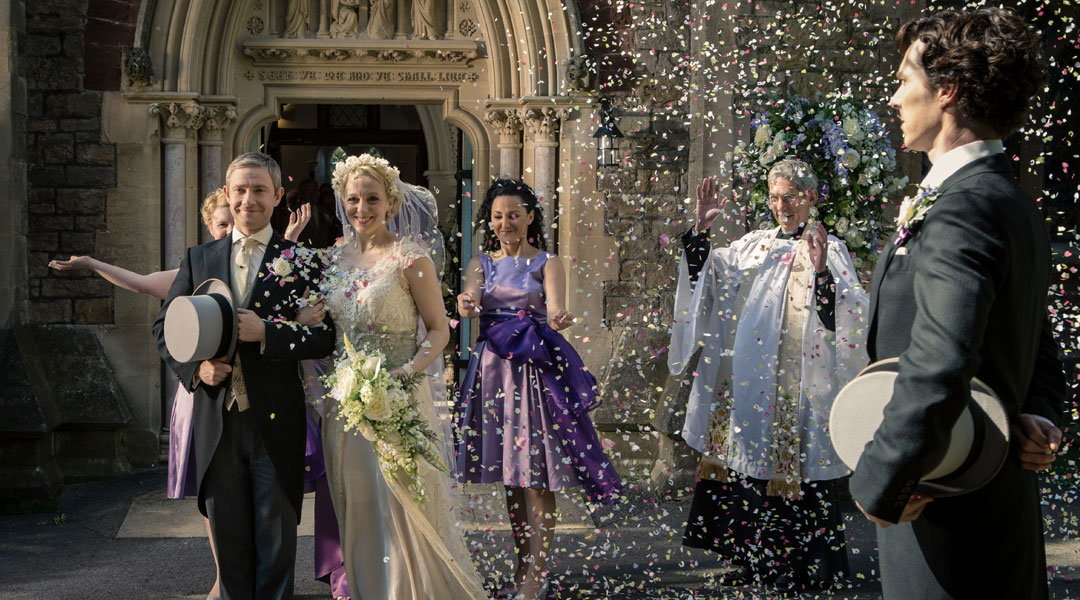 Detective Inspector Lestrade (Rupert Graves): They just walked out of there.
Sgt Sally Donovan (Vinette Robinson): Yeah, I know. I was sort of sitting next to you.
Lestrade: The whole Waters family. They just walked right out of there.
Donovan: Again, I was in the room, and–
Lestrade: How do they always manage that?
Donovan: They’re good.
Lestrade: They’re greedy, and they’ll do it again and next time we’re gonna catch them in the act.
Donovan: How?

Donovan: Greg!
Lestrade: In the act! The only way we’re going to do this: In. The. Act.

Lestrade: You know how most day aren’t good days? This is a good day.
Donovan: Not for the Walters family.

Sherlock: This is hard. The hardest thing I’ve ever had to do. {showing him the book How to Write Unforgettable Speeches} Do you know any funny stories about John?
Lestrade: What?
I need anecdotes. You didn’t go to any trouble, did you? {a helicopter descends outside}

Sherlock: Why are you here?
Mrs. Hudson (Una Stubbs): I’m bringing you your morning tea. You’re not usually awake.
Sherlock: You bring me tea in the morning?
Mrs. Hudson: Well where do you think it came from?
Sherlock: I don’t know, I just thought it sort of happened.
Mrs. Hudson: Your mother has a lot to answer for.
Sherlock: I know. I have a list. Mycroft has a file.

Sherlock: I think from now on we’ll downgrade you to casual acquaintance. No more than three planned social encounters a year, and always in John’s presence. I have your contact details. I will be monitoring.
David (Oliver Lansley): They’re right about you. You’re a bloody pyschopath.
Sherlock: High-functioning sociopath. With your number.

Janine (Yasmine Akram): Can I keep you?
Sherlock: Do you like solving crimes?
Janine: Do you have a vacancy?

Mycroft Holmes (Mark Gatiss): So this is it then. The big day. I suppose I’ll be seeing a lot more of you from now on.
Sherlock: What do you mean?
Mycroft: It’ll be just like old times.
Sherlock: I don’t understand.
Mycroft: Well it’s the end of an era, isn’t it? John and Mary. Domestic bliss.

Mycroft: Oh by the way, Sherlock. Do you remember Red Beard?
Sherlock: I’m not a child anymore, Mycroft.
Mycroft: No, of course you’re not. Enjoy not getting involved, Sherlock.

Molly Hooper (Louise Brealey): Greg.
Lestrade: Molly.
Molly: I just had a thought.
Lestrade: Is that a brain?
Molly: What if John asks Sherlock to be his best man?
Lestrade: Well he will. I mean he’s bound to.
Molly: Exactly.
Lestrade: So?
Molly: So he’ll have to make a speech. In front of people. They’re will be actual people there actually listening.
Lestrade: What’s the worst that could happen?
Molly: Helen Louise probably wondered the same.
Lestrade: Helen Louise? {she looks at the brain}

Sherlock: So in fact… you mean…
Watson: Yes.
Sherlock: I’m your… best… friend?
Watson: Man. Yeah, of course you are. Of course you’re my best friend. {Sherlock takes a sip out of the eyeball glass}. And how was that?
Sherlock: Surprisingly okay.

Sherlock: Today we honor the death watch beetle that is the doom of our society and in time, one feels certain, our entire species. But anyway. Let’s talk about John.

Sherlock: If I burden myself with a little helpmate during my adventures, it is not out of sentiment or caprice, it is that he has many fine qualities of his own that he has overlooked in his obsession with me. Indeed any reputation I have for mental acuity and sharpness comes in truth from the extraordinary contrast John so selflessly provides. It is a fact, I believe, that brides tend to favor exceptionally plain bridesmaids for their big day. There is a certain analogy there I feel. and contrast is after all God’s own plan to enhance the beauty of His creation. Or it would be if God were not a ludicrous fantasy designed to provide a career opportunity for the family idiot. The point I’m trying to make is that I am the most unpleasant, rude, ignorant and all-around obnoxious asshole that anyone could possibly have the misfortune to meet. I am dismissive of the virtuous, unaware of the beautiful, and uncomprehending in the face of the happy. So if I didn’t understand I was being asked to be best man, it is because I never expected to be anybody’s best friend. and certainly not the best friend of the bravest and kindest and wisest human being I have ever had the good fortune of knowing.

Sherlock: John, I am a ridiculous man. Redeemed only by the warmth and constancy of your friendship. But as I am apparently your best friend I can not congratulate you on your choice of companion. actually, no I can. Mary, when I say you deserve this man, it is the highest compliment of which I am capable.

Sherlock: Now. Serviette. Swan or Sydney Opera House?
Mary Morstan (Amanda Abbington): Where’d you learn to do that?
Sherlock: Many unexpected skills required in the field of criminal investigation.
Mary: Fibbing, Sherlock.
Sherlock: I once broke an alibi by demonstrating the exact severity of a folded–
Mary: I’m not John. I can tell when you’re fibbing.
Sherlock: Okay, I learned it on YouTube.

Watson: Why have you suddenly taken an interest in another human being?
Sherlock: I’m chatting. {beat} Won’t be trying that again.

Watson: See the thing about Mary, she had completely turned my life around. Changed everything. But for the record, over the last two years there are two people that have done that, and the other one is– . a complete dickhead.

Sherlock: John, wake up. The game is… something.
Watson: On.
Sherlock: Yeah, that. That.

Lestrade: What a couple of light weights. You couldn’t even make it ’til closing time.
Watson: Can you whisper?
Lestrade: Not really!

Mycroft: Oh Sherlock. What do we say about coincidences?
Sherlock: “The universe is rarely so lazy.”

Watson: Sherlock, any chance of an end date for this speech? We’ve gotta cut the cake.
Sherlock: Oh! Ladies and gentlemen, can’t stand it when I finally get the chance to speak for once. Vatican cameos.
Mary: What did he say? What does that mean?
Watson: Battle stations. Someone’s going to die.

Sherlock: Imagine someone’s going to get murdered at a wedding. Who exactly would you pick?
Mrs. Hudson (Una Stubbs): I think you’re a popular choice at the moment, dear.
Sherlock: If someone could move Mrs. Hudson’s glass slightly out of reach that would be lovely.

Watson: You are not a puzzle solver, you never have been. You’re a drama queen.

Janine: Do you always carry handcuffs?
Sherlock: Down, girl.

Sherlock: Today we saw two people make vows. I’ve never made a vow in my life and after tonight I never will again. So. Here in front of you all, my first and last vow. Mary and John, whatever it takes, whatever happens, from now on I swear I will always be there. always. For all three of you. I’m sorry, I mean two of you. All two of you. Both of you in fact. I just miscounted.

Sherlock: Sorry, that was one more deduction than I was really expecting.

Sherlock: Stop panicking.
Watson: I’m not panicking.
Mary: I’m pregnant, I’m panicking.
Sherlock: Don’t panic. None of you panic. Absolutely no reason to panic.
Watson: Oh, and you’d know of course?
Sherlock: Yes I would. You’re already the best parents in the world. Look at all the practice you’ve had.