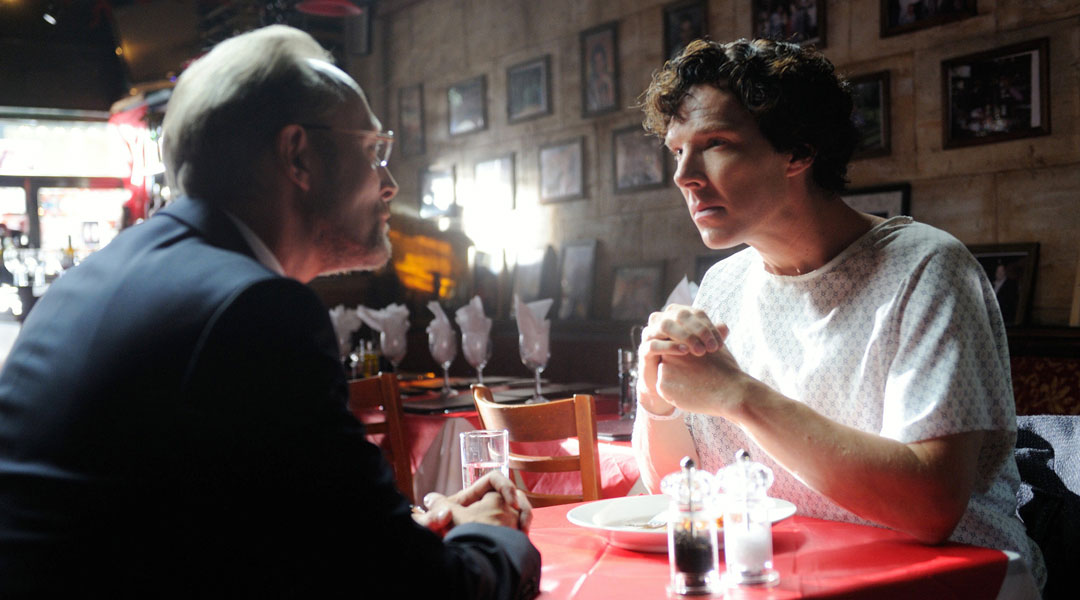 Lady Smallwood: Magnussen. No one stands up to him. No one dares—no one even tries. There isn’t a man or woman in England capable of stopping that disgusting creature.

Watson: Is it Sherlock Holmes you want? Because I’ve not seen him in ages.
about a month.
Who’s Sherlock Holmes?
Mary (Amanda Abbington): See? That does happen.

Watson: There is nothing the matter with me! Imagine I said that without shouting.
Mary: I’m trying.
Watson: No, you can’t come. You’re pregnant.
Mary: You can’t go. I’m pregnant.

Watson: I’m asking you if you’ve seen Isaac Whitney and now you’re showing me a knife. Is it a clue?

Watson: Well? Is he clean?
Molly: Clean? {she walks over to Sherlock and slaps him. A lot.} How dare you throw away the beautiful gifts you were born with. And how dare you betray the love of your friends! Say you’re sorry.
Sherlock: Sorry your engagement’s over. Though I’m fairly grateful for the lack of a ring.

Sherlock: Hang on, weren’t there other people?
Watson: Mary is taking the boys home, I’m taking you. We did discuss it.
Sherlock: People were talking, none of them me. I must have filtered.
Watson: I noticed.
Sherlock: Had to filter out a lot of witless babble. Ive had Mrs. Hudson on semi-permanent mute.

Mycroft: Well then, Sherlock. Back on the sauce?
Sherlock: What are you doing here?
Watson: I phoned him.
Mycroft: The siren call of old habits. How very like Uncle Rudy. Though in many ways cross dressing would have been a wiser path for you.
Sherlock: You phoned him.
Watson: Of course I bloody phoned him.
Mycroft: ‘Course he bloody did. Now, save me a little time. Where should we be looking?
Sherlock: We?
Philip Anderson (Jonathan Aris): Mr. Holmes!
Sherlock: For God’s sake!

Watson: What happened to my chair?
Sherlock: It was blocking my view to the kitchen.
Watson: Well it’s good to be missed.
Sherlock: Yeah, you were gone. I saw an opportunity.
Watson: No, you saw the kitchen.

Mycroft: Magnussen is not your business.
Sherlock: Oh you mean he’s yours?
Mycroft: You may consider him under my protection.
Sherlock: I consider you under his thumb.
Mycroft: If you go against Magnussen, then you will find yourself going against me.
Sherlock: Okay. I’ll let you know if I notice.

Watson: It’s for a case, you said?
Sherlock: Yep.
Watson: What sort of case?
Sherlock: Too big and dangerous for any sane individual to get involved in.
Watson: You trying to put me off?
Sherlock: God no. I’m trying to recruit you.

Watson: You have a girlfriend.
Sherlock: Yes I have.

Sherlock: I’ve dealt with murderers, psychopaths, terrorists, serial killers. None of them can turn my stomach like Charles Augustus Magnussen.
Watson: Yes, you have.
Sherlock: Sorry, what?
Watson: You have a girlfriend.

Janine (Yasmine Akram): I haven’t told Mary about this. I kind of wanted to surprise her.
Watson: Yeah, I think you probably will.

Sherlock: Seriously? I’ve just told you that the Western world is run from this house and you want to talk about dinner?

Mrs. Hudson (Una Stubbs): That was the doorbell. Couldn’t you hear it?
Sherlock: It’s in the fridge. It kept ringing.
Mrs. Hudson: Oh, that’s not a fault, Sherlock.

Sherlock: Did you notice the one extraordinary thing he did?
Watson: There was a moment that kind of stuck in the mind, yeah.
Sherlock: Exactly. When he showed us the letters.
Watson: Okay.

Sherlock: There are fourteen layers of security between us and him. Two of which aren’t even legal in this country.

Sherlock: If I was to use this card on that lift now, what happens?
Watson: Ah, the alarms would go off and you’d be dragged away by security.
Sherlock: Exactly.
Watson: You’d be taken to a small room somewhere, and your head kicked in.
Sherlock: Do we really need so much color?
Watson: It passes the time.

Watson: Jesus. Sherlock. She loves you.
Sherlock: Yes. Like I said. Human error.

Watson: What are you going to do?
Sherlock: Well not actually marry her, obviously. There’s only so far you can go.
Watson: So what will you tell her?
Sherlock: Well I’ll tell her that our entire relationship was a ruse to break into her boss’ office. I imagine she’ll want to stop seeing me at that point but you’re the expert on women.

Watson: We should call the police.
Sherlock: During our own burglary? You’re really not a natural at this, are you?

Sherlock: Mary, whatever he’s got on you, let me help.
Mary: Oh Sherlock. I swear, if you take one more step I will kill you.
Sherlock: No, Mrs. Watson. You won’t.

Molly: It’s all well and clever having a mind palace, but you’ve only three seconds of consciousness left to use it.

Moriarty: You always feel pain, Sherlock. But you don’t have to fear it.

Moriarty: You’re letting him down, Sherlock. John Watson is definitely in danger.

Janine: Just one thing. You shouldn’t have lied to me. I know what kind of man you are. We could have been friends.

Sherlock: The doctor’s wife must be a little bit bored by now.

Sherlock: I’ll take the case.
Mary: What case?
Sherlock: Yours.

Mycroft: Oh dear god it’s only two o’clock. It’s been Christmas Day for at least a week now. How can it only be two o’clock? I am in agony.
Mrs. Holmes (Wanda Ventham): Mikey, is this your laptop?
Mycroft: Upon which depends the security of the free world, yes. And you’ve got potatoes on it.

Mrs. Hudson: What is going on?
Watson: Bloody good question.
Sherlock: The Watsons are about to have a domestic. And fairly quickly, I hope, because we have work to do.
Watson: No, I have a better question. Is everyone I’ve ever met a psychopath?
Sherlock: Yes. Good that we’ve settled that.

Watson to Mary: You. What have I ever done? Hm? My whole life, to deserve you?
Sherlock: Everything.
Watson: Sherlock, I told you. Shut up.
Sherlock: No, I mean it. Seriously. Everything. Everything you’ve ever done is what you did.
Watson: Sherlock, one more word and you will not need morphine.
Sherlock: You were a doctor who went to war. You’re a man who couldn’t stay in the suburbs for more than a month without storming a crack den, beating up a junkie. Your best friend is a sociopath who solves crimes as an alternative to getting high. That’s me by the way, hello. Even the landlady used to run a drug cartel.
Mrs. Hudson: It was my husband’s cartel. I was just typing.
Sherlock: And exotic dancing.
Mrs. Hudson: Sherlock Holmes. If you’ve been YouTube-ing —
Sherlock: John, you are addicted to a certain lifestyle. You’re abnormally attracted to dangerous situations and people, so is it truly such a surprise that the woman you’ve fallen in love with conforms to that pattern?
Watson: But she wasn’t supposed to be like that. Why is she like that?
Sherlock: Because you chose her.

Why is everything always my fault!

Watson: So that’s what you were? An assassin? How could I not see that?
Mary: You did see that. And you married me. Because he’s right. It’s what you like.

Sherlock: You can trust Mary. She saved my life.
Watson: She shot you.
Sherlock: Mixed messages, I grant you.

Watson: Sherlock, please tell me you haven’t just gone out of your mind.
Sherlock: I’d rather keep you guessing.

Sherlock: Coming?
Watson: Where?
Sherlock: Want your wife to be safe?
Watson: Yeah, of course I do.
Sherlock: Good, because this is going to be incredibly dangerous. One false move and we’ll have betrayed the security of the United Kingdom and be imprisoned for high treason. Magnussen is quite simple the most dangerous man we’ve ever encountered and the odds are comprehensively stacked against us.
Watson: But it’s Christmas.
Sherlock: I feel the same. Oh, you mean it’s actually Christmas.

Sherlock: Did you bring your gun as I suggested?
Watson: Why would I bring my gun to your parents’ house for Christmas dinner?
Sherlock: Is it in your coat?
Watson: Yes.

Magnussen: Let me explain how leverage works, Dr. Watson. For those that understand these things, Mycroft Holmes is the most powerful man in the country. Well. Apart from me.

Magnussen: Knowing is owning.
Watson: But if you just know it, then you don’t have proof.
Magnussen: Proof? What would I need proof for. I’m in news, you moron. I don’t have to prove it, I just have to print it.

Give my love to Mary. Tell her she’s safe now.

Watson: The game is over.
Sherlock: The game is never over, John. But there may be some new players now. That’s okay. The east wind takes us all in the end.
Watson: What’s that?
Sherlock: It’s a story my brother told me when we were kids. The east wind. This terrifying force that lays waste to all in its path. Seeks out the unworthy and plucks them from the Earth. That was generally me.
Watson: Nice.
Sherlock: He was a rubbish big brother.

Sherlock: To the very best of times, John.

Watson: But he’s dead. I mean you told me he was dead. Moriarty.
Sherlock: Absolutely. He blew his own brains out.
Watson: So how can he be back?
Sherlock: Well if he is, he’d better wrap up warm. There’s an east wind coming.