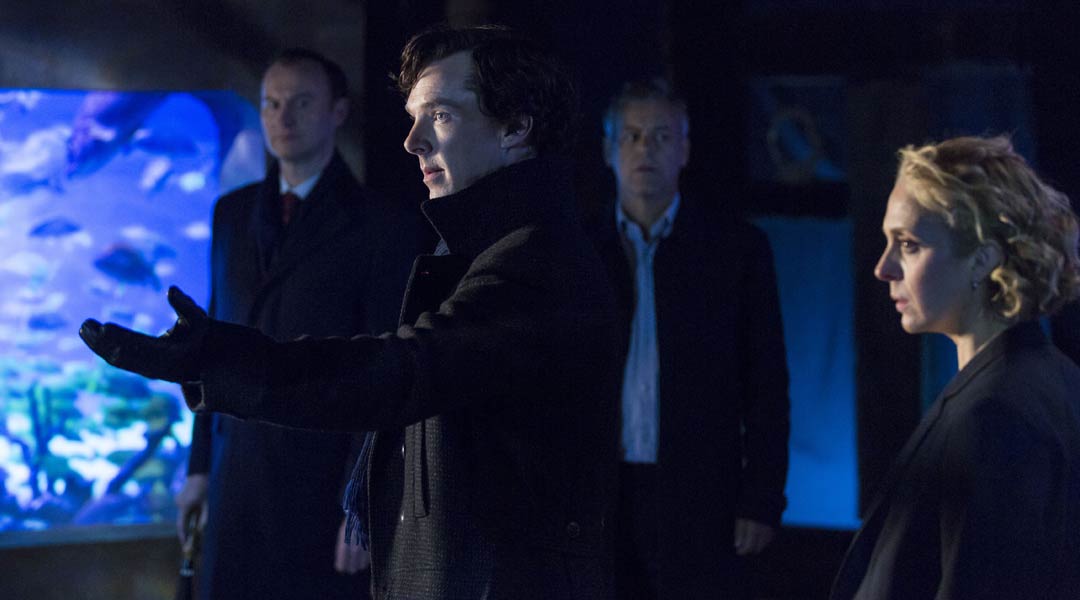 Mycroft Holmes: What you’re about to see is classified beyond top secret. Is that quite clear? {to the stenographer} Don’t minute any of this. Once beyond these walls, you must never speak of it. A D-notice has been slapped on the entire incident. Only those within this room, code names Antarctica, Langdale, Porlock and Love, will ever know the whole truth. As far as everyone else is concerned, going to the Prime Minister and way beyond, Charles Augustus— Are you tweeting?
Sherlock Holmes: No.
Mycroft: Well that’s what it looks like.

Watching the doctored footage of Magnussen’s death
Sherlock: I see. Who is supposed to have shot him then?
Mycroft: Some over-eager squaddie with an itchy trigger finger, that’s who.
Sherlock: That’s not what happened at all.
Mycroft: It is now.

Sherlock: I always know when the game is on. You know why?
Lady Smallwood: Why?
Sherlock: Because I love it.

Sherlock: God is ludicrous fiction dreamt up by inadequates who abnegate all responsibility to an invisible magic friend.
Watson: Yeah but they’ll be cake. Will you do it?
Sherlock: I’ll get back to you.

Sherlock: As ever, Watson, you see but do not observe. To you, the world remains an impenetrable mystery, whereas to me it is an open book. Hard logic versus romantic whimsy. That is your choice. You fail to connect actions to their consequences. Now for the last time. If you want to keep the rattle, do not throw the rattle.

Lestrade (Rupert Graves): So how’s it going then, fatherhood?
Watson: Oh good. Great. Yeah, amazing.
Lestrade: Getting any sleep?
Watson: Christ no.
Lestrade: You being at the beck and call of a screaming, demanding baby, woken up at all hours to obey his every whim? Must feel very different.
Sherlock: Sorry, what?
Watson: Yes, well, you know how it is. All you do is clean up their mess. Pat them on the head.
Sherlock: You two having a little joke?
Watson: Never a word of thanks. Can’t even tell people’s faces apart.
Sherlock: This is a joke, isn’t it?
Watson: Yes, it’s all on you. Clever. You’re so so clever.
Sherlock: Is it about me?
Lestrade: I think he needs winding.
Watson: You know I think that really might be it.
Sherlock: Nope, don’t get it.

Sherlock: Intuitions are not to be ignored, John. They represent data processed too fast for the conscious mind to comprehend.

Emma Welsborough (Amanda Root): Is your friend quite mad?
Watson: No, he’s an arsehole but it’s an easy mistake.

Watson: What’s so important about a broken bust of Margaret Thatcher?
Sherlock: Can’t stand it. Never can. There’s a loose thread in the world.
Watson: That doesn’t mean you have to pull on it.
Sherlock: What kind of a life would that be?

Mycroft: I met her once.
Sherlock: Thatcher?
Mycroft: Rather arrogant, I thought.
Sherlock: You thought that?
Mycroft: I know. Why am I looking at this?
Sherlock: That’s her. John and Mary’s baby.
Mycroft: Oh I see. Yes. Looks very… fully-functioning.
Sherlock: Is that the best you could do?
Mycroft: Sorry. I’ve never been very good with them.
Sherlock: Babies?
Mycroft: Humans.

Sherlock: What is that?
Watson: That is me. Well it’s a me substitute.
Sherlock: Don’t be so hard on yourself. You know I value your little contributions.
Watson: Yeah? It’s been there since nine this morning.

Watson: How’d you work all that out?
Sherlock: She’s got three children in Rio that he doesn’t know about.
Watson: Are you just making this up?
Sherlock: Possibly.

Sherlock: Mary? This is about Mary.
Ajay (Sacha Dawan): That what she’s calling herself now, eh.

Ajay: Tell her she’s a dead woman. She’s a dead woman walking.
Sherlock: She’s my friend. And she’s under my protection. Who are you?
Ajay: I’m the man who’s going to kill your friend. Who’s Sherlock Holmes?
Sherlock: Not a policeman.

Ambassador (Gabrielle Glaister): I’ve got something they would dearly love if only we could get out of here. I’ve got Ammo.
Husband (Harry Gostelow): Ammo?

Mary: Madam Ambassador.
Ambassador: What took you so long?
Mary: Can’t get the staff.

Sherlock: I am an idiot. I know nothing.
Mary: Well I’ve been telling you that for ages.

Mary: That was quite a text you sent me. What’s going on, Sherlock?
Sherlock: I was so convinced it was Moriarty I couldn’t see what was right under my nose. I expected a pearl.
Mary: Oh my god. That’s a…
Sherlock: Yes, it’s an AGRA memory stick like you gave John, except this one belongs to someone else. Who?
Mary: I don’t know. We all had one, but the others…. Haven’t you even looked at it yet?
Sherlock: I glanced at it, but I prefer to hear it from you.
Mary: Why?
Sherlock: Because I’ll know the truth when I hear it.

Mary: God, I just wanted a bit of peace and I really thought I had it.
Sherlock: No, Mary. You do. I made a vow, remember? To look after the three of you.
Mary: Sherlock the Dragon Slayer.

Mycroft: Is that sentiment talking?
Sherlock: No, it’s me.
Mycroft: Difficult to tell the difference these days.
Sherlock: Told you, I made a promise. A vow.

Mary: How did you get in here?
Sherlock: Karim let me in.
Karim (Albert Magashi): Hello!
[…]
Mary: No, I, I mean, how did you find me?
Sherlock: I’m Sherlock Holmes.
Mary: Really though, how? Every movement I made was entirely random. Every new personality just on the roll of a dice.
Sherlock: Mary, no human action is ever truly random. An advanced grasp of the mathematics of probability mapped onto a thorough apprehension of human psychology and the known dispositions of any given individual can reduce the number of variables considerably. I myself know of at least 58 techniques to refine the seemingly infinite array of randomly generated possibilities down to the smallest number of feasible variables. She nods. But they’re really difficult so instead I just stuck a tracer on the inside of the memory stick.
Mary: Oh you bastard.

Watson: AGRA.
Mary: Yes.
Watson: You said it was your initials.
Mary: In a way that was true.
Watson: In a way? So many lies.
Mary: I’m so sorry.
Watson: I don’t just mean you.
Mary: Sorry?
Watson: Alex, Gabriel, Ajay… You’re R. Rosamund.
Mary: Rosamund Mary. I always liked Mary.
Watson: Yeah, me too. I used to.

Watson: Mary, I may not be a very good man. But I think I’m a bit better than you give me credit for. Most of the time.

Lady Smallwood: This is absolutely ridiculous and you know it. How many more times?
Mycroft: Six years ago, you held the brief for foreign operations. Codename Love.
Lady Smallwood: And you’re basing all this on a codename? On a whispered voice on the telephone? Come on, Mycroft.
Mycroft: You were the conduit for AGRA. Every assignment, every detail, they got from you.
Lady Smallwood: It was my job.
Mycroft: Then there was the Tbilisi incident. AGRA went in.
Lady Smallwood: Yes.
Mycroft: And they were betrayed.
Lady Smallwood: Not by me. She composes herself. Mycroft, we’ve known each other a long time. I promise you, I haven’t the foggiest idea what all this is about. You wound up AGRA and all the other freelancers. I haven’t done any of the things you’re accusing me of. Not one. Not one.

Vivian Norbury (Marcia Warren) watching the sharks: We’re like them. Ghostly. Living in the shadows.
Sherlock: Predatory.
Vivian: Well it depends which side you’re on. Also we have to keep moving or we die.
Sherlock: Nice location for the final act. Couldn’t have chosen it better myself. But then I never could resist a touch of the dramatic.
Vivian: I just come here to look at the fish.

Sherlock: Let me introduce Ammo.
Mary: You were Ammo? You were the person on the phone that time.
Sherlock: Using AGRA as her private assassination unit.
Mary: Why did you betray us?
Vivian: Why does anyone do anything?
Sherlock: Oh, let me guess. Selling secrets?
Vivian: Well it would be churlish to refuse.

Sherlock: There’s no way out.
Vivian: So it would seem. You see right through me, Mr. Holmes.
Sherlock: It’s what I do.
Vivian: Maybe I can still surprise you.
Lestrade: Oh come on, be sensible.
Vivian: No, I don’t think so. She shoots. Surprise.

Mary: John, I think this is it.
Watson: No no no no. It’s not. It’s…
Mary: You made me so happy. You gave me everything I could ever, ever…
Watson: Shh shh.
Mary: …want.
Watson: Mary, shh.
Mary: Look after Rosie.
Watson: Shh.
Mary: Promise me.
Watson: I promise. I promise.

Mary: You were my whole world. Being Mary Watson… was the only life… worth living. Thank you.

Watson to Sherlock: Don’t you dare. You made a vow. You swore it.

Sherlock: I need to know what to do.
Do?
Sherlock: About John.

Mrs. Hudson (Una Stubbs): Nothing will ever be the same again, will it?
Sherlock: I’m afraid it won’t.
Mrs. Hudson: We’ll have to rally around, I expect. Do our bit. Look after little Rosie.

Sherlock: Mrs. Hudson.
Mrs. Hudson: Yes, Sherlock?
Sherlock: If you ever think I’m becoming a bit full of myself. Cocky or overconfident. Would you just say the word “Norbury” to me. Would you?
Mrs. Hudson: “Norbury”?
Sherlock: Just that. I’d be very grateful.

Mary: If you’re watching this, I’m… probably dead. I hope I can have an ordinary life, but who knows. Nothing’s certain, nothing’s written. My old life, it was full of consequences. The danger was the fun part, but you can’t outrun that forever. You need to remember that, so… I’m giving you a case, Sherlock. Might be the hardest case of your career. When I’m gone—if I’m gone—I need you to do something for me. Save John Watson. Save him, Sherlock. Save him.

Sherlock: When does the path we walk on lock around our feet? When does the road become a river with only one destination. Death waits for us all in Samarra. But can Samarra be avoided?