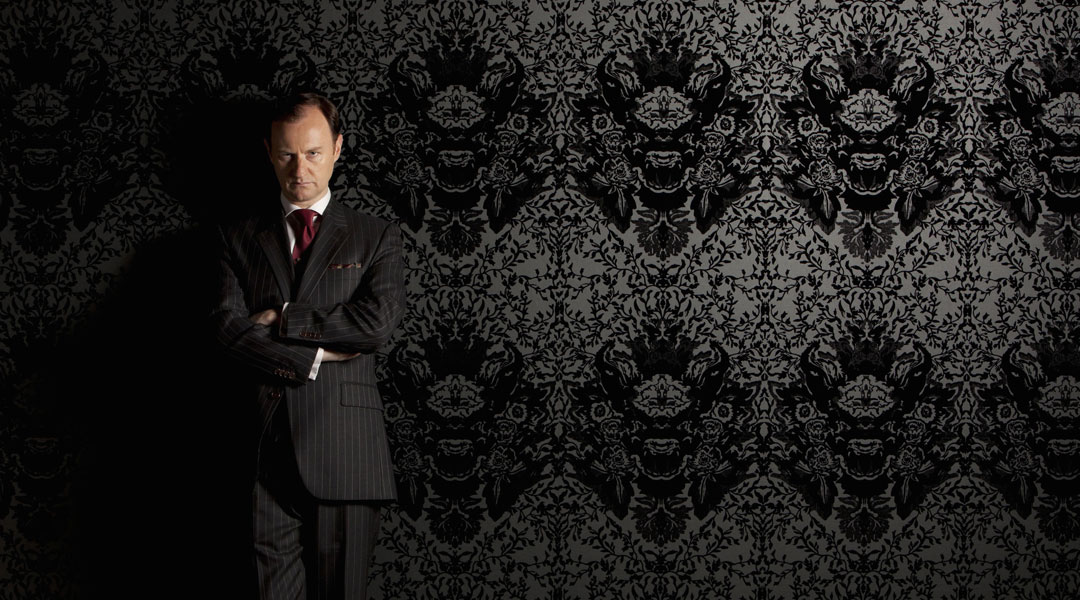 A Scandal in Belgravia

Mycroft Holmes (Mark Gatiss): Just once can you two behave like grown-ups?
Watson: We solve crimes, I blog about it and he forgets his pants. I wouldn’t hold out too much hope.

Mycroft: We are in Buckingham Palace. The very heart of the British nation. Sherlock Holmes, put your trousers on.
Sherlock: What for?
Mycroft: Your client.
Sherlock: And my client is?
Harry: Illustrious. In the extreme. And remaining, I’ll have to inform you, entirely anonymous.

Mycroft: May I just apologize for the state of my little brother.
Harry: Full time occupation I imagine.

Sherlock: Mycroft, I don’t do anonymous clients. I’m used to mystery at one end of my cases. Both ends is too much work. Good morning.
Mycroft: This is a matter of national importance. Grow up!
Sherlock: Get off my sheet!
Mycroft: Or what?
Sherlock: Or I’ll just walk away.
Mycroft: I’ll let you.
Watson: Boys, please. Not here.

Mycroft: I’ll be mother.
Sherlock: And there is a whole childhood in a nutshell.

Sherlock: You have a police force of sorts. Even a marginally Secret Service. Why come to me?
Harry: People do come to you for help, don’t they Mr. Holmes?
Sherlock: Mm… not to date anyone with a navy.
Mycroft: This is a matter of the highest security and therefore of trust.
Watson: You don’t trust your own Secret Service?
Mycroft: Naturally not. They all spy on people for money.

Mycroft: What do you know about this woman? {he shows her a photograph}
Sherlock: Nothing whatsoever.
Mycroft: Then you should be paying more attention.

Sherlock: The photographs are perfectly safe.
Mycroft: In the hands of a fugitive sex worker.
Sherlock: She’s not interested in blackmail. She wants… protection for some reason. I take it you stood down the police investigation into the shooting at her house.
Mycroft: How can we do anything while she has the photographs? Our hands are tied.
Sherlock: She’d applaud your choice of words.

Mrs. Hudson (Una Stubbs): It’s a disgrace, sending your little brother into danger like that. Family is all we have in the end, Mycroft Holmes.
Mycroft: Oh shut up, Mrs. Hudson.
Sherlock: Mycroft!
Mycroft: Apologies.
Mrs. Hudson: Thank you.
Sherlock: Though do in fact shut up.

Sherlock: There’s nothing you can do and nothing she will do as far as I can see.
Mycroft: I can put maximum surveillance on her.
Sherlock: Why bother. You can follow her on Twitter.

Sherlock: What else does she have? {Mycroft feigns ignorance} Irene Adler. The Americans wouldn’t be interested in her for a couple of compromising photographs. There’s more. Much more. Something big’s coming, isn’t it?
Mycroft: Irene Adler is no longer any concern of yours. From now on you will stay out of this.
Sherlock: Oh, will I?
Mycroft: Yes Sherlock. You will.

Sherlock: You didn’t need to come in, Molly.
Molly: That’s okay. Everyone else was busy with… Christmas. Ah, the face is a bit sort of bashed up, so it might be a bit difficult.
Mycroft: That’s her, isn’t it?
Sherlock: Show me the rest of her. {Molly pulls the sheet} That’s her.
Mycroft: Thank you, Miss Hooper.
Molly: Who is she? How did Sherlock recognize her from… not her face?

Sherlock: Smoking indoors. Isn’t that one of those “law” things?
Mycroft: We’re in a morgue. There’s only so much damage you can do.

Sherlock: Do you ever wonder if there’s something wrong with us?
Mycroft: All lives end. All hearts are broken. Caring is not an advantage, Sherlock.
Sherlock: This is low tar.
Mycroft: Well. You barely knew her.

Mycroft: Have you found anything?
Watson: No. Did he take the cigarette?
Mycroft: Yes.
Watson: Shit.

Watson: Looks like he’s clean. We’ve tried all the usual places. Are you sure tonight’s a danger night?
Mycroft: No. But then I never am. You have to stay with him, John.
Watson: I’ve got plans.
Mycroft: No.

Mycroft: The Coventry Conundrum. What do you think of my solution? The Flight of the Dead.
Sherlock: The plane blows up midair. Mission accomplished for the terrorists. Hundreds of casualties but nobody dies.
Mycroft: Neat, don’t you think? You’ve been stumbling around the fringes of this one for ages. Or were you too bored to notice the pattern?

Mycroft: The terrorist cells have been informed that we know about the bomb. We can’t fool them now. We’ve lost everything. One fragment of one email. And months and years of planning. Finished.
Sherlock: Your MOD man.
Mycroft: That’s all it takes. One lonely naive man, desperate to show off. And a woman clever enough to make him feel special.
Sherlock: You need to screen your defence people more carefully.
Mycroft: I’m not talking about the MOD man, Sherlock, I’m talking about you!

Irene Adler: I imagine you’d like to sleep on it.
Mycroft: Thank you, yes.
Irene Adler: Too bad. Off you pop and talk to people.

Mycroft: You’ve been very… thorough. I wish our lot were half as good as you.
Irene Adler: I can’t take all the credit. Had a bit of help. {to Sherlock} Jim Moriarty sends his love.
Mycroft: Yes, he’s been in touch. Seems desperate for my attention. Which I’m sure can be arranged.

Mycroft: Here you are, the dominatrix who brought a nation to its knees. Nicely played.
Sherlock: No.
Irene Adler: Sorry?
Sherlock: I said, no. Very very close, but no. You got carried away. The game was too elaborate. You were enjoying yourself too much.
Irene Adler: No such thing as too much.
Sherlock: Oh enjoying the thrill of the chase is fine. Craving the distraction of the game, I sympathize entirely. But sentiment, sentiment is a chemical defect found in the losing side.
Irene Adler: Sentiment. What are you talking about?
Sherlock: You.
Irene Adler: Oh dear god, look at the poor man. You don’t actually think I was interested in you? Why? Because you’re the great Sherlock Holmes? The clever detective in the funny hat?
Sherlock: No. Because I took your pulse.

Sherlock: There you are, brother. I hope the contents make up for any inconvenience I may have caused you tonight.
Mycroft: I’m certain they will.

Watson: Is that the file on Irene Adler?
Mycroft: Closed forever. I am about to go and inform my brother—or if you prefer, you are—that she somehow got herself into a witness protection scheme in America. New name, new identity. She will survive—and thrive. But he will never see her again.
Watson: Why would he care? He despised her at the end. Won’t even mention her by name. Just The Woman.
Mycroft: Is that loathing or a salute? One of a kind, the one woman who matters.
Watson: He’s not like that. He doesn’t feel things that way. I don’t think.

Mycroft: My brother has the brain of a scientist or a philosopher, yet he elects to be a detective. What might we deduce about his heart?
Watson: I don’t know.
Mycroft: Neither do I. But initially he wanted to be a pirate.

Watson: He’ll be okay with this. Witness protection, never seeing her again. He’ll be fine.
Mycroft: I agree. That’s why I decided to tell him that.
Watson: Instead of what?
Mycroft: She’s dead. She was captured by a terrorist cell in Karachi two months ago and beheaded.
Watson: It’s definitely her? She’s done this before.
Mycroft: I was thorough this time. It would take Sherlock Holmes to fool me. And I don’t think he was on hand. Do you? So. {he pushes over the file} What should we tell Sherlock?

The Hounds of Baskerville

Moriarty sits in a cell
Mycroft: Alright. Let him go.

Mycroft: Tradition, John. Our traditions define us.
Watson: So total silence is traditional, is it? You can’t even say, “Pass the sugar.”
Mycroft: Three-quarters of the diplomatic service and half the government front bench all sharing one tea trolley. It’s for the best, believe me. We don’t want a repeat of 1972.

Mycroft: He’s taken a flat at Baker Street. Two doors down from you.
Watson: Hm. I was thinking of doing a drinks thing for the neighbors.
Mycroft: I’m not sure you’ll want to. Suleimani. Albanian hit squad. Expertly trainer killer living less than twenty feet from your front door.
Watson: Well it’s a great location. Jubilee Line’s handy.

Watson: I’m sensing a pattern here.
Mycroft: In fact four top international assassins relocate within spitting distance of 221B. Anything you care to share with me?
Watson: I’m moving?

Mycroft: It’s not hard to guess the common denominator, is it?
Watson: You think this is Moriarty?
Mycroft: He promised Sherlock he’d come back.
Watson: If this was Moriarty we’d be dead already.
Mycroft: If not Moriarty, then who?

Watson: Why don’t you talk to Sherlock if you’re so concerned about him? Oh god. Don’t tell me.
Mycroft: Too much history between us, John. Old scores, resentments.
Watson: Knicked all his Smurfs. Broke his Action Man.

Mycroft: We both know what’s coming, John. Moriarty is obsessed. He’s sworn to destroy his only rival.
Watson: So you want me to watch out for your brother because he won’t accept your help.
Mycroft: If it’s not too much trouble.

Watson: She has really done her homework, Miss Reilly. Talks of things that only someone close to Sherlock would know.
Mycroft: Ah.
Watson: Have you seen your brother’s address book lately? Two names. Yours and mine. And Moriarty didn’t get this stuff from me.
Mycroft: John—
Watson: So how does it work then, your relationship? You go out for a coffee now and then, eh? You and Jim. Your own brother, and you blabbed about his entire life to this maniac.
Mycroft: I never intend— I never dreamt.
Watson: See this is what you were trying to tell me, isn’t it? “Watch his back because I’ve made a mistake.” How’d you meet him?
Mycroft: People like him, we know about them. We watch them. But James Moriarty…. The most dangerous criminal mind the world has ever seen. And in his pocket, the ultimate weapon. The key code. A few lines of computer code that can unlock any door.
Watson: And you abducted him to try and find the key code.
Mycroft: Interrogated him for weeks.
Watson: And?
Mycroft: He wouldn’t play along. He just sat there, staring into the darkness. The only thing that made him open up… I could get him to talk. Just a little. But…
Watson: In return you had to offer him Sherlock’s life story. So it’s one big lie—Sherlock’s a big fraud—and people will swallow it because the rest of it’s true.
Watson: Moriarty wanted Sherlock destroyed, hm? And you have given him the perfect ammunition.
Mycroft: John. I’m sorry.
Watson: Oh please.
Mycroft: Tell him, would you.