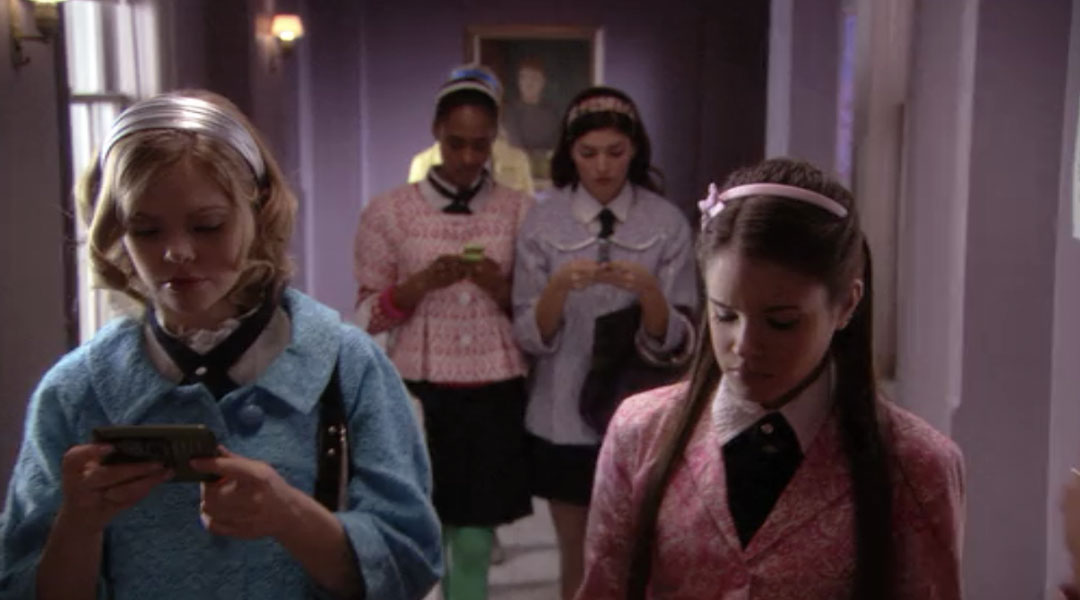 Gossip Girl: Spotted: Jenny Humphrey wading in the Met fountain, fishing for change. Blair Waldorf seen dallying with an off-duty doorman on Monday night. It looks like the battle between the Queen B and Little J has moved from the streets to the blogs. Who’s sending this debasing dish? I have a feeling.

Blair: A nice shiny dime to add to your collection.
Jenny: Why the fruit cup, B? Lost your taste for yogurt?

Serena: Hey, why the long face? Are you still sad that Mom wouldn’t let you go to Monte Carlo for the bachelor party?
Eric: No, I’m fine. I figured I’d let Bart, Chuck and Prince Albert have their fun…. No, that didn’t come out like I meant it. Gossip Girl. Looks like Jenny’s been spotted at Gap sewing Stella McCartney labels onto pocket tees.
Serena: These rumors are getting to be ridiculous.
Eric: Oh, like the one where I’m Gossip Girl?
Serena: Hey, it made sense at the time. You have to admit, it did.

Dan: So this tutor, is he cute?
Serena: If hair in ears is your thing.

Gossip Girl: Sometimes, in an effort to spread the most outrageous rumors, we look over the very thing that’s even more scandalous—the truth. And the only thing more shocking than the truth are the lies people tell to cover it up.

Lily: When you revise the seating chart, don’t forget to place Mr. Spitzer as far away from Serena’s table as possible. Thank you. Ugh, what is not on the schedule today?
Rufus: I don’t think I am. Maybe you can fit me in between Preston Bailey and Sylvia Weinstock.
Lily: Well good luck fitting anything between those two. What are you doing here?
Rufus: Well believe it or not I’m here to see you.
Lily: Well I have a laundry list of things to do today.
Rufus: It’s about Jenny. Alison’s away at an artists’ retreat and I could really use a mother’s advice. I think I’m in over my head.
Lily: I suppose we could talk about it on the way.

Dan: Asher. Got a minute?
Asher Hornsby (Jesse Swenson): Yeah, but just a minute. Jenny and I have a lunch date.
Dan: Well look there’s no easy way to say this, honestly, so I’m just going to, I’m just going to say it. I saw you. This morning.
Asher: Saw me what?
Dan: I saw you, you know. I saw you kissing that guy.
Asher: You’ve got the wrong person.
Dan: C’mon man, I don’t think I do.
Asher: Are you calling me queer?
Dan: That’s not at all what I said.
Asher: Do you wanna know how “queer” I am? I’m so queer I’m gonna pop your sister’s cherry tonight.
Dan gives him a solid right hook to the jaw. Or, you know… should have.

Serena: It’s a snub from one party, B. What’s the big deal anyway? You didn’t even like Asher.
Blair: I didn’t like last season’s Louis Vuitton patchwork bag either but that doesn’t mean I want to see it all over town on Jenny Humphrey’s arm.
Serena: Touché.

Serena: What’s wrong? You look stressed, even for you.
Dan: I’m still worried about Jenny
Blair: You mean because she’s self-obsessed, self-serving, self-centered, self-
Dan: No. no. Ah, I wish it was about her— her self. But it’s more about who she’s with. I can’t get through to her. I tried and she just completely blew me off. And she dissed my pants.
Blair: Maybe I underestimated her.
Serena: She’s just going through a phase. We all went through it. And apparently some of us are still in it.
Blair: All that matters to someone like Jenny right now are the four G’s: guys, girlfriends and Gossip Girl.
Serena: It’s true. Don’t feel bad. Unless it’s coming from one of them she’s not going to hear it.

Lily: If Serena’s indiscretions were as PG as Jenny’s I wouldn’t have needed the Botox.

Gossip Girl: This just in: Asher Hornsby spotted locking lips before class, but not with his girlfriend. Looks like gentlemen don’t prefer blondes, Little J. They prefer other gentlemen. Is this just another round of blanks fired between B and Little J? I’m tired of being the bearer of bad grudges. This is the last item that goes to press without proof.

Iz (Nicole Fiscella): I am so glad Gossip Girl finally got her balls back.
Penelope (Amanda Setton): Yeah, she was totally turning into the new Page Six.

Jenny: Low blow.
Blair: Wasn’t me. Wish it was.

Blair: Dan Humphrey. Just who I hate to admit I was looking for. You’re dirty.
Dan: What are you talking about?
Blair: Cheating, drinking, drugs. It’s all fair game. But outing your sister’s boyfriend is dark. How did Squeaky Clean Humphrey even come up with that?
Dan: I didn’t come up with anything.
Blair: Oh my god. You know something. Spill it.
Dan: Yeah, I might have seen Asher kissing another guy.
Blair: So it’s true? Who was he kissing?
Dan: I don’t know, I couldn’t see. But why does that even matter?
Blair: Right now Gossip Girl’s credibility is the same as Tinsley Mortimer’s after a few martinis.

Lily: Really Rufus, what were you thinking? You threw her a surprise birthday party and had her face painted on the cake with a tiara?
Rufus: Seemed like a good idea at the time.
Lily: Yeah well so did flannel and acid washed jeans, but they weren’t flattering either.

Blair: Whoever said that money doesn’t buy happiness didn’t know where to shop.

Blair: It was once said that a person’s eyes are windows into their soul. That was before people had cell phones.

Asher: What are you doing?
Jenny “the Beard” Humphrey: What’s wrong?
Asher: Nothing’s wrong. This… just isn’t what we do. Are you suddenly not happy? I— I’m holding up my end of the bargain.
Jenny: What bargain?
Asher: You’re Jenny Humphrey. From Brooklyn. You need status, access, resources. I give that to you.
Jenny: What do I give you?
Asher: Do we really need to talk about this?
Jenny: Yeah. Yeah, we do. So what was on Gossip Girl’s true.
Asher: Do you really think someone like me would just date someone like you?
Jenny: You’ve been so nice.
Asher: And I’ll keep being nice. Nothing has to change, okay?

Gossip Girl: Breaking News: Asher Hornsby overheard bragging that Little J swiped her V card at his register. Didn’t anyone teach you, Little J? You shouldn’t give away the ending if you want him to pick up the book again.

Dan: Jenny, is this true?
Jenny: It’s private.
Dan: It’s on the internet.

Jenny: You think you’re so different and so good. Well guess what, Dan. The minute you start sending tips to Gossip Girl you’re in the game with the rest of us.

Rufus to Jenny: You’ve already lost my trust. Do you really want to lose my respect too?

Serena: Who were you talking to?
Eric: Chuck.
Serena: You called Chuck?
Eric: Yeah, I’ve been talking to him a lot lately. Guy’s got his faults but he’s never judged me.
Serena: I’m your sister. We’re “us”. You can tell me anything.
Eric: I wanted to, but it’s not the type of thing you blurt out on the way to school. I was waiting for the right time.

Serena: I know this isn’t how you wanted it to happen.
Eric: I guess the important thing is that it’s happening.
Serena: I’m so proud of you. I’ll love you. No matter what you do, who you like, whose boyfriend kisses you. The people that care about you always stand by your side, okay?

Blair: Watch and learn, Ladies. The most important parties to attend are the ones you’re not invited to.

Blair: Thought you might want this back.
Asher: Whatever you found, it’s not what it looks like.
Blair: It’s always what it looks like. And judging by the texts and photos look’s like a little more than a friendship.
Asher: What are you going to do with them?
Blair: Well, lucky for you, your “friend” is someone I actually care about or I would have used them against you and Jenny already. Too bad you don’t care about him the same way.
Eric: It’s okay, Blair. I can handle this.
Asher: What’s he doing here?
Jenny: What is she doing here?
Eric: You gonna tell her or am I?
Asher: There’s nothing to tell.
Eric: Gossip Girl was right. Asher was kissing someone this morning. Me.
Asher: He’s totally lying. Tell him Jenny. I was with you all morning.
Jenny: Yeah, Asher’s right. I was with him. Eric’s lying.
Eric: Why would I stand here in front of everyone we know and tell them if it wasn’t true? I’m gay. And so are you.

Asher: What did you just do?
Blair: You’ll see.

Lily: We make quite the team.
Rufus: Always did.

GG: Weekend Update: A same-sex kiss hasn’t caused this much controversy since Britney and Madonna. Looks like Little J didn’t spread her legs after all. She spread lies instead. Asher is gay and I have the correspondence to prove it.

Amber: It’s kind of hard to party after the Gay Bomb drops.

Penelope: Dating a gay guy is an honest mistake, but lying to your friends about sex is unforgivable.
Iz: To think, I almost asked you to wear a matching dress tonight.
Penelope: You’re branded with the “L” Word. Liar.

GG: Don’t look so sad, Little J. The sun will come out tomorrow. Even if your boyfriend did today.

Lily: Hey, um. I made some tea. It’s probably iced now, but, um, my reaction earlier—
Eric: It’s okay, mom.
Lily: No, it’s not okay. You just caught me off-guard, I guess I, I just wasn’t ready.
Eric: Well I wasn’t ready either, so… it’s okay if you need time.
Lily: Well, since you’re being so honest I’m going to try as well. I’m scared. Life is tough enough as it is, you know? I want the best for you. And, um, I’m worried for your safety. And your happiness.
Eric: I have a better chance of being happy if I’m honest.
Lily: I know that. And I want you to know that love is whoever you’re with. Because it’s pretty great.

Blair: My my. If it isn’t Little J, risen from the ashes.
Jenny: I came to tell you in person: you win.
Blair: Sweetie, we just started to play.

Serena: No. I don’t believe you about Eric, about anything.
Georgina: Maybe you’re right. Maybe I did it on purpose. Because I can. Because I know things about you, about your family, about your boyfriend. And I know them before you do.

Rufus: Angry. Shames. Trust. Girl. Something you want to talk about?
Dan: Who would have thought Scrabble would be so therapeutic. That last one was a triple word score.

Jenny: Dad, do you think it would be okay if I joined you?
Rufus: You know there’s always room for you here.

Blair: What is it?
Serena: I killed someone.