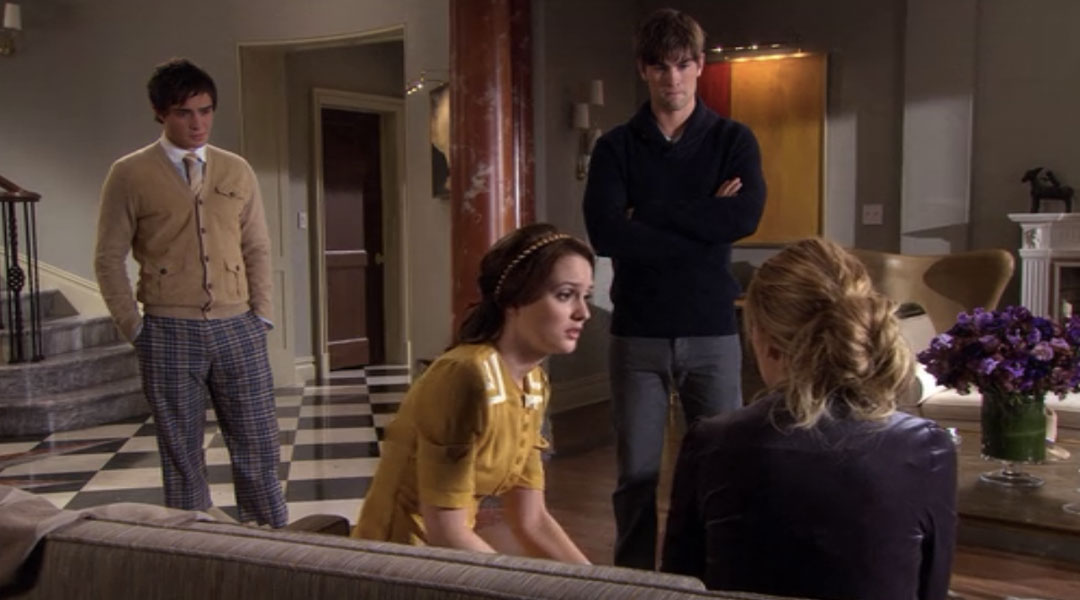 Gossip Girl: In our modern age, when you call someone and can’t find them you can be pretty sure they’ll get the message. But if they don’t call you back, it usually means they don’t want to be found.

Rufus: I don’t know if you know this, but you can be a pretty judgmental guy.
Dan: So you’re saying that I should learn to be someone else around her so she can be herself around me?
Rufus: Couldn’t have said it better myself.

Chuck: Maybe this is Blair’s idea of a perverse double-date.

Gossip Girl: Spotted: Lonely Boy on the Upper East Side. Learning the lesson that nothing stays missing forever. Things always turn up. For better.
Nate: Well is something actually wrong or is this just a ploy to get us both here?
Blair: I meant what I said on the phone. I need your help. We need your help.
Or for worse.

Chuck: So we have every hangover cure known to man. Plus bagels. This should help soak up the alcohol and—
Blair: Thank you, I’ll take it from here.
Nate: Why do I get the feeling you’re actually enjoying this?
Chuck: Call me sentimental.
Blair: We may not need those bagels after all.

Chuck: What exactly did she say to you?
Blair: That’s beside the point. We’re gonna help Serena no matter what the problem is.

Rolling Stone (Stephen Kunken): Tell me where you took this photograph. What undoubtedly could be called the band’s most well-known image.
Lily: Oh, well I wouldn’t go that far.
Rolling Stone: Well I would. It’s positively iconic. Were you and Rufus Humphrey already involved when you took it?
Lily: Excuse me?
Rolling Stone: Rufus Humphrey. Lead singer of Lincoln Hawk. Was this before or after?
Lily: Oh, well I simply don’t feel comfortable discussing anything other than my work.
Rolling Stone: I was talking about your work. Why’d you give up photography? Was it too hard to continue shooting after you broke his heart?

Lily: I have to say, I have never been happier to see you, Dan.

Dan seeing Nate at Blair’s: Hm. Guess I missed a chapter. and Chuck Or… four. Don’t all of you hate each other?
Blair: Yes.
Chuck: No.
Nate: Absolutely.
Dan: Well that’s fascinating and rife for a psychiatrist’s case study somewhere.

Dan: Are you really going to stop me from seeing my girlfriend?

Dan: What’s happening?
Serena: Dan—
Dan: Something’s going on. And I just want to be let in on what it is.
Serena: It’s hard to explain.
Dan: Let me make it easy for you. I know you’re keeping something from me. And I’m sick of being the only one you don’t talk to about it.
Serena: I’m not talking to anyone.
Dan: Then what are they doing here? Why do I get a call from a bartender who says you left the bar at two in the morning with a bunch of guys? What guys, Serena? Who were they?
Serena: I don’t know.
Dan: Did something happen last night?
Serena: Please don’t—
Dan: Is that it— You’re afraid to tell me that you cheated on me? Did you cheat on me last night? All I need is a yes or a no. Did you sleep with someone else?
Serena: Yes. Yeah.
Dan: I’m done. I’m done.

Dorota: Miss Serena is here.
Lily: So I’ve heard several times today.
Dorota: I know it’s not my place, but Miss Serena is [] old days.
Lily: What are you trying to say?
Dorota: I think you should have worry about your daughter. Worry like before she went away.
Lily: Well, uh. Thank you Dorota. I’ll take care of it.

Serena: I can’t believe I just did that.
Nate: And why did you? I mean, did you cheat on Dan?
Serena: No. I remember last night. I didn’t do anything.
Blair: Then why would you
say that to him?
Serena: Because I would rather have Dan think I cheated on him than know what I really did.
Nate: What you really did?
Serena: Dan puts me on a pedestal. If he knew the truth he would never look at me again.
Chuck: You’re starting to scare even me. What did you do?
Nate: C’mon, you can tell us.
Blair: We’ve seen you with vomit and hanging out with investment bankers in the men’s room of PJ Clarke’s. You don’t have to hide anything from us.
Nate: She’s right Serena. None of us are saints.
Blair: Yeah, I had sex with him in the back of a limo.
Chuck: Several times.
Nate: I had sex with you at a wedding. Once.
Chuck: I’m Chuck Bass.
Blair: You can tell us anything. We don’t judge. We’re the non-judging Breakfast Club. We’re your best friends. Anything you do is something we did too.
Serena: What I tell you can never leave this room.

Serena: You all know Georgina Sparks.
Blair: Some of us better than others. to Chuck It’s not like you didn’t lose your virginity to her in seventh grade.
Chuck: Sixth actually. And I’ve been avoiding her ever since. The bitch is a psycho.
Nate: What about her?
Serena: Well something happened the night of the Shepherd wedding.
Blair: I think we’re all aware what happened that night.
Serena: No, something else. Something I’ve tried to escape but Georgina won’t let me. And now she’s blackmailing me.
Nate: Blackmailing you?
Chuck: With what exactly?
Serena: Well it started when Blair thought you and I had too much to drink. She told us to go outside, get some air, sober up. Instead we went into the empty bar, bottle of champagne—
Blair: We can skip that part, okay.
Chuck: Go ahead. I’ll fill in later.

Pete Fairman (Elan Moss-Bachrach): Are you sure she’s gonna be down for this?
Georgina (Michelle Trachtenberg): It’s Serena. She goes down for anything.

Serena: I didn’t know what to do. I just knew I had to leave right away. I took a train heading North and I got a room and convinced my mom that boarding school was a good idea and—
Blair: Never said goodbye. It makes sense now.

Nate: Why don’t you just tell Dan about her?
Serena: Because she has that tape of me and she’ll use it. It’s practically a snuff film.
Chuck: We need to find her.

GG: Watch out, S. Just because you finally tell the truth doesn’t mean there won’t be consequences.

Lily: I have nothing left but to send you to reformatory school. What do you think about that?

Blair: Don’t send her away.
Lily: Blair it’s not polite to interrupt.
Blair: I don’t care who hears. Just don’t send her away.
Lily: Thank you, Blair. But it’s not exactly your business what I do with my daughter. If anything, you’re one of the reasons I’m having to take such strong action.
Blair: I say this with all due respect, Lily. But you have no idea what your daughter’s been going through. She’s in a lot of pain.
And I don’t think the pain’s going to go away if she goes away.
Lily: I don’t understand what you’re trying to tell me.
Blair: Serena has a secret. And she’s been holding onto it for a long long time.And now it’s finally catching up with her. I’m out of my league here. I can’t do any more than I’ve done. And it’s not enough. She needs you.
Lily: I saw the video. She needs boundaries.
Blair: What you saw isn’t the whole story.

Nate: Hey, I only have a second. I’m on my way to Queens.
Blair: Ugh. Gross. Why?
Nate: To meet Vanessa at a concert.
Blair: It got grosser.

Chuck: What’s gotten into you?
Blair: What if I told you I knew where Georgina Sparks was right now?
Chuck: I’d say let’s get the bitch.

GG: Spotted: Blair and Chuck reunited to defend Serena’s honor. With friends like these who needs armies?

Serena: So where are we?
Lily: It’s the Fairman’s house. This is where the boy who died grew up. And his parents are expecting you.
Serena: Mom, I can’t go in there.
Lily: Sweetie, if I have learned anything in life it is that sometimes things get in your path and you have a choice. You can either smash right into them or you can adjust and move around. But you have to do one or the other in order to move forward.
Serena: How can I do this?
Lily: I’m gonna be right by your side.

Georgina: Hey V. I didn’t realize you’d be able to hang during the concert.
Vanessa (Jessica Szohr): Do you have something you want to say to me?
Georgina: Not… that I know of.
Vanessa: You sure about that… Georgina?

Vanessa: I’m not a big fan of liars and neither is Dan. I’m giving you a chance to explain yourself here.

Serena: Then why do I still feel like this?
Lily: Because contrary to what I might have said earlier, you are a good person. Who since that night has been living her life with care and compassion, respect—for yourself and for others. I’m sorry I doubted you.

Dan: You know it’s really loud in here. You want to go somewhere else—someplace quiet—and talk?
Georgina: But your dad’s about to go on.
Dan: He’ll understand. It’s not like we won’t be watching this on YouTube for the next five years.

Serena: Hey, thank god you called. I’m here looking for you right now. Where are you?
Georgina: With me.
Serena: Georgina?
Georgina: I hear you told our little secret. If that’s how you want to play it, that’s how we’ll play it.
Serena: I’m not afraid of you anymore.
Georgina: You should be. ‘Cause all bets are off.
Serena: Why? What are you gonna do?
Georgina: It’s not what I’m gonna do, Sweetie. It’s who i’m gonna do it with.
Serena: No. I know Dan. He’s too good.
Georgina: You sure about that?

GG: If I were you, S, I’d be worried. In the city that never sleeps a lot can happen in one night. Sweet dreams, Serena. —XOXO Gossip Girl.