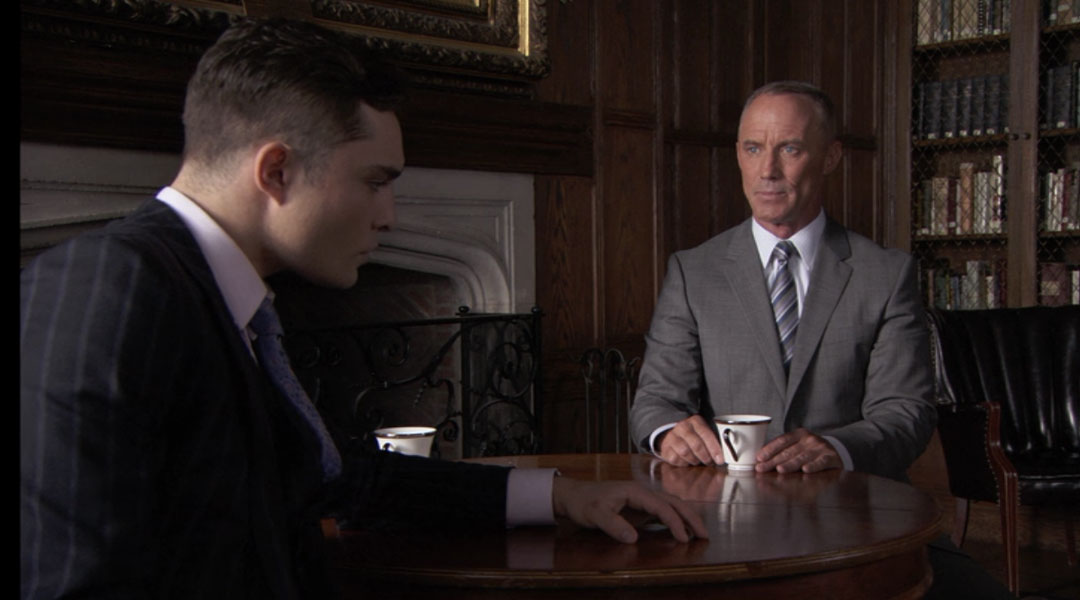 Chuck: So the car accident was real?
Bart (Robert John Burke): I was lucky to survive it. But it wasn’t an accident. I’d been threatened.
Chuck: By who?
Bart: A very powerful competitor of mine. I had information on some transactions of his that could have put him away for a very long time. But his threats didn’t work.
Chuck: They had someone ram your limo with a truck? Dad, You could have gone to the police. You didn’t have to—
Bart: Yes, I did. He’d made it quite clear that both you and Lily were fair game. Once I realized his threats weren’t empty, the only way out was to make him think he’d already won. Once I got to the hospital that night I figured that would be my best chance.
Chuck: So what, you just paid some doctors to switch off the machines? Hope Lily was crying so much that she wouldn’t notice you were actually still breathing? What did we bury in that coffin?
Bart: Charles, I am here with you now, trying to explain.

Blair: That was your agent. She wants you to reconsider the program in Rome. Which is odd, because you told me they went with someone else.
Dan: Ah, well, yesterday when you ended up with Chuck I was a little nervous about leaving for the whole summer. And I know you told me there were other people there and it was not romantic, but… come on. It’s Chuck.
Blair: So you lied to me.
Dan: I figured you would just think I was some jealous freak if I told the truth.
Blair: Well maybe because you are. But you don’t have to be. You have nothing to worry about. Take the offer. It’s an amazing opportunity and I would never stand in the way of it.
Dan: It means the entire summer apart.
Blair: But it’s not like I can’t come visit. Rome is just two glasses of chardonnay away.

Nate: I want you out of here. Today.
Diana (Liz Hurley): After all the fun we’ve had together?
Nate: What would people think if they knew about your side business?
Diana: Is that a threat? Because I am your main financial backer and we did sleep together. Sometimes right here in these very offices. So exposing me would only embarrass the Spectator. And you.
Nate: Then I’ll find another way.

Blair: Guess what I found out this morning?
Serena: B, I know what you’re going to say. But first I really want to tell you—
Blair: Dan turned down the opportunity to spend the summer in Rome with the world’s literary luminaries. And do you know why? Because he’s scared of leaving me here with Chuck. Can you believe it?
Serena: Sort of.
Blair: I mean the most important thing in a relationship is trust. After sex. And hygiene. And earning potential. Wait. What did you think I was going to say?
Serena: Ah… I mean, it’s not important. Nowhere near as important as Dan and Italy and his trust issues. We should get coffee and you should tell me more about it.
Blair: Wait. Okay, using a very generous grading curve and rounding up—because I like your outfit—that lie was a C+ at best. What is going on?
Serena: Something I’ve been wanting to talk to you about for awhile now. I’ve been posting on Gossip Girl as Gossip Girl. For a couple of months now.
Blair: What? How is that possible?
Serena: When Georgina left town she gave me her laptop and it had a direct link to the Gossip Girl server, passwords, the software, everything.
Blair: S, you had me at Georgina, but I can’t believe it. Why didn’t you tell me?
Serena: I don’t know. I felt like it was something I had to keep secret from everyone. I mean, my best friend even. I know it was wrong and I’m so sorry.
Blair: I mean I could have helped. Sealing fates, forging destinies. Like an imperious Greek goddess. Imposing her will on the guileless masses. But I was wondering why Gossip Girl was being so nice to me lately. And a little off her game. No offense.
Serena: So you’re not mad?
Blair: I am furious with you! For not sharing your good fortune and omnipotence. But right now I have to go replace my mother’s La Mer before she returns from Paris and discovers I’ve used it all.

Chuck: There’s so much I want to know. I guess now we have time. You can tell me everything.
Bart: Unfortunately I’m afraid our time is up. If the man I’m hiding from were to discover I’m still alive he’d try and kill me again. Or go after you.
Chuck: Let’s go after him.
Bart: All you need to know is that as long as I’m still around we’re still in danger.

Gossip Girl: Sometimes looking for answers only leads to more questions. And sometimes you’re better off not knowing.

Blair: Chuck, I can’t really be seen with you right now. But how are you doing? Are you okay?
Chuck: Far from it. I have to find a way to stop my father from leaving tonight.
Blair: Leaving? But you just found him.
Chuck: He left to keep me safe. Now it’s my turn to save him.

Gossip Girl: But the best way to avoid giving an answer is to avoid the question all together.

Blair: I’m with Chuck.
Serena: B.
Blair: No it’s not like that. He needs me. He’s going through an extremely difficult time right now.
Serena: Yeah, of course he is. Especially if it means taking you away from Dan to be with him. And you just told me Dan is having trust issues.
Blair: I know, but this is life or death. And other than not being able to say where I am, what I’m doing or who I’m waiting for, I honestly have nothing to hide. Well Dan needs you too and you can’t be two places at once.
Serena: You’re right. I’ll be right there. Whatever news he has I’m sure it won’t take that long to relay.

Diana: I don’t suppose you came here to thank me.
Chuck: Thank you for what? Not telling me my father was alive, pretending to be my mother, or screwing my best friend?
Diana: You mean for keeping your father alive. Pretending to be your mother to protect him and, well, I don’t expect you to thank me for Nate. Perhaps I should thank you for that one.
Chuck: Look, I’m not here to hug it out or bond over my father’s resurrection. I just need your help in keeping him here.
Diana: I’m afraid that’s not possible.
Chuck: I’m afraid it is. You’ve been helping him hide. I think you know who from. Who tried to kill my father? I know it was one of his competitors, someone powerful enough to scare him into hiding these last few years. I just want a name.
Diana: Does your father know you’re here?
Chuck: If you really want to help him, help me put an end to this.
Diana: If I do agree—and only if—you can never say who told you. And I need something else from you. It’s not a small request.

Serena: What was Dan’s big surprise?
Blair: It was more of an ambush. He got into this writing program in Rome and he wants me to go with him the entire summer.
Serena: How dare he! Blair, that’s amazing.
Blair: I told him I had to check my calendar to buy some time to think.
Serena: What’s there to think about? Rome for the summer sounds like a dream.
Blair: Not for Romans. The whole place will be crawling with Americans.
Serena: And you can be two of them.
Blair: But it’s a big decision. And spending last summer at Louis’ side I was hoping to do my own thing.
Serena: So your indecision has nothing to do with Chuck?
Blair: Absolutely not. My concern for him at this time is about something entirely unrelated.
Serena: Which you can’t tell me about. B, I hate being out of the loop.

Gossip Girl: They say the truth will set you free. But some truth comes at a price.

Chuck: What have you done?
Serena: Okay, someone has to tell me what’s going on here.
Nate: We couldn’t let her get away without any consequences. She’s done nothing but deceive all of us, including you. It just wasn’t right.
Lola (Ella Rae Peck): Yeah, we’re sorry we messed up your deal but this was beyond business. It was personal.
Chuck: You have no idea how personal. I made that deal with her so she would help get my father out of hiding.
Serena: Your father. You mean Jack.
Chuck: Bart. He’s alive.

Dan: You don’t think this is too much? I mean it’s just an interview with one person.
Blair: Well we want to impress him, right?
Dan: I think they’re just trying to make sure we’re a sane, stable couple. I guess they’ve had some trouble in the past. Apparently Padma Lakshmi and Salman Rushdie broke up during their stay and it caused all kinds of drama.

Ivy (Kaylee DeFer): I’ll do whatever it takes to help. I’d love to get back in the gang.
Blair: But just to clarify. In order to be back in the gang, you would have had to be in the gang to begin with.

Gossip Girl: Looks like S is BSing as B. Let’s hope this works. There’s no place like Rome.

Dan: Where the hell is Blair? If she didn’t want to go to Rome with me she should have just said so.
Serena: Something came up.
Dan: Is she with Chuck?
Serena: No, of course not. She’s with Eleanor. But she knows how important this is and she really wants to go. So she sent me in her place.
Dan: You’re not really helping.
Serena: I don’t know. He just said we made an interesting couple.
Dan: Not in a good way.

Ivy: How do you know this will work?
Blair: Do you think this is the first time I’ve entrapped someone with prostitutes?

Diana: Nate, I can’t go back to my old life. And I stand no chance of starting a new one with my name in the headlines. Must you keep me here to humiliate me on top of all that?

Gossip Girl: Uh oh, Chuck. You might need to have your private investigator investigated.

Gossip Girl: When you care about someone, you want them to stay. But sometimes showing you care means letting them go.

Blair: Thanks S. You really are my best friend.
Serena: I love you, B.
Blair: I love you too.
Serena: Speaking of which, think it’s time to tell Dan how you feel about him?
Blair: He told you about that? I’m not ready. I really want the next person I say it to to be the last.

Dan: Do you really want to spend the entire summer with me in Rome? Chuck’s dad is alive. That is going to change his world deeply.
Blair: His, yes. But not mine.
Dan: I understand why you did what you did today, but I need to know for me—for us—what is really happening here.
Blair: There is nothing I want more than to spend the summer right by your side.

Gossip Girl: Evening, Upper East Siders. Many of you have complained I’ve been too kind to S and B these last few months. But all of that’s about to change. Because I’ve got a page from Blair Waldorf’s diary, where she tells all about who’s really in her heart. And there’s lots more where that came from courtesy of her bff SVDW. XOXO —Gossip Girl