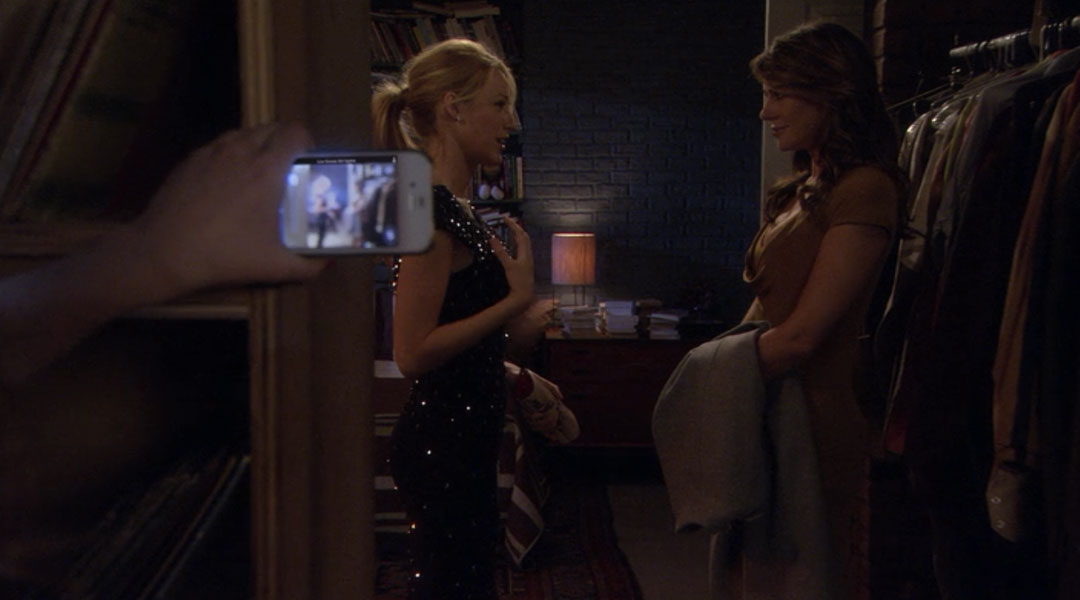 Gossip Girl: Even on the Upper East Side, the laws of physics dictate that what goes up, must come down. Even when it feels as if our feet are a million miles off the ground. But when we’ve hit rock bottom we hope that some way, some how, our fortunes will change. That a great force will reverse the trend.

Nate: Listen, just ’cause you’re cousins doesn’t mean you have to be best friends. My cousin tried to kill me.

Blair: We have a very busy day ahead of us. So try to look alive.

Dan: Sounds like the perfect plan.
Blair: Of course it is. I came up with it.

Rufus: What’s with the tie?
Dan: Oh, it’s a Blair thing. I find it’s best to pick my battles. What’s with the tool belt?
Rufus: Oh it’s a handyman thing.
Dan: I can see that. And as happy as I am to have a chair that finally rolls, don’t you think it’s time for you to head home.
Rufus: I am home.
Dan: No, I mean your other home. The one with your wife in it. Usually you two were the king and queen of reconciliation. Shouldn’t you be forgiving each other right now in the midst of a teary embrace?
Rufus: I know. I don’t know how I let things get so out of hand.

Rufus: When Lily and I first got married I threw myself into her world. I became a plus one. For galas and in life. But in the process I lost myself and what’s important to me. We never managed to build a life together that included both of us. And I’m tired of it.
Dan: But now you’re living separately. Stuck in a stalemate. That isn’t exactly the ideal alternative.
Rufus: Yeah, but at least I’m regaining my identity. I know you’re happy with Blair. And maybe in time you’ll learn to love wearing this tie. But don’t lose sight of yourself.

Diana (Liz Hurley): Chuck’s on a mission?
Nate: Yeah, he’s looking for a missing relative. And if you have to look that hard, it’s never the answer you want to find.

Gossip Girl: Serena is holding my site hostage. If you don’t get it back for me I’ll tell everyone the secret that made you afraid of me in the first place.

Gossip Girl: LOLA IS A DIVA. Wannabe actress Lola Rhodes was overheard bragging: “Everyone knows the star’s the thing. Real actors don’t take direction, some are just better at pretending they do.”

Rufus: I will eat your roughage but we both know that’s not why you’re here. Why can’t you just admit you wanted to see me?
Lily: Okay, fine. I missed you. I said it.

Diana: Isn’t it exciting. Finally meeting the infamous Gossip Girl in the flesh.

Blair: Just because a tree grows in Brooklyn does not mean I have to plant it. I’m not going green, I’m going home.
Dan: Wait a second—
Blair: We can’t be photographed. We are coming out tonight as a couple at the theater.
Dan: So we’ll come out now in Brooklyn and then uptown later. I mean it’s the best of both worlds.
Blair: Dan, a couple only has one chance to make a first impression on the world and I’m not doing it knee-deep in fertilizer looking like Vanessa whats-her-name.

Lola: Have you ever wondered who Gossip Girl actually is? Like have you ever tried to find her?
Nate: Yeah, of course. But she keeps her identity pretty well-hidden.
Lola: I have a theory. Serena.
Nate: Serena what?
Lola: Serena is Gossip Girl.

Serena: A history with Gossip Girl means you have something to hide.
Diana: I’m a woman who has lived. I have plenty to hide.

Nate: So are we still in a fight?
Serena: You did fire me, but it actually turned out for the best.
Nate: I don’t know about you, but I’d really like to put it behind us.
Serena: Yeah, me too.

Gossip Girl: Uh oh, Diana. Looks like mischief is written into your DNA.

Lola: Hey Dorota. I’m looking for Serena. Have you seen her?
Dorota: Miss Serena hiding in room all day long like blonde unabomber.

Gossip Girl: Seems New York’s newest intellectuals are about to get dumbed down.

Blair: I am trying to maintain a stiff British upper lip. But how can I keep calm and carry on with those two here? Serena will spend the whole night judging us and Lola is probably just trying to squeeze every last drop of free press out of the night so she can move on from the community theater circuit.
Dan: Blair, our salon can easily handle a few party crashers. And besides you should at least be a little flattered that they made it all the way to Brooklyn to check it out.

Blair: We can handle this. WWDPD. {Dan looks lost} What Would Dorothy Parker Do?
Dan: Ah, get them drunk until we get back.
Blair: Of course! A liquid diet of booze and great intellectual conversation should suffice.

Serena: I just have a couple of questions. Like, where were you the night of Chuck’s accident, November 18?
Diana: I was here. In New York.
Serena: Do you happen to know where he was treated for his injuries? Or his blood type. Do you know the date he was born or where you were on that date?
Diana: I know what you’re getting at.
Serena: Well if you know what I’m getting at then why don’t you answer for me. Or would you like me to do that?
Diana: What do you want me to say?
Serena: The nurse recognized you. You saved Chuck’s life. And you did that because—
Diana: I’m Chuck’s mother.

Gossip Girl: If you want my advice, it’s Run Lola, Run. ‘Cause you just let out the mother of all secrets.

Chuck: Is it true?
Diana: Yes, Charles. It is.
Chuck: Don’t! Just, stay right there. You have been in New York for months. Inviting me to parties. Hiring my friends. Hanging out in my apartment in your underwear. Banging my best friend. Did it not occur to you to mention this—that you were my mother?!
Diana: Please, Chuck. I can explain.
Chuck: I can’t do this right now, or ever. I can’t.

Gossip Girl: The Brits say, God save the Queen. But it looks like Lola is the one in need of a royal SOS.

Blair: You running away?
Dan: No.
Blair: Joining the army? Auditioning for one of those America’s Got Idle Talent Factor shows?
Dan: I was hoping I could have a sleep over with you.
Blair: You do realize that means you’d be entering my world.
Dan: I do. Our relationship isn’t about choosing one world or another. Our relationship is our world.
Blair: Then tonight our relationship was a world wide disaster.
Dan: It’s probably not going to be our last, but we have to face these disasters. We’re a team.

Diana: We had an affair and it only ended when I got pregnant.
Chuck: You kept the baby. You must have wanted me. I mean, why did you give me up?
Diana: I was a mess. Mixed up in the wrong things with the wrong people. Unfit to raise a child. And then Elizabeth, she couldn’t get pregnant. Seemed like a way to solve all our problems.
Chuck: So you made a deal.
Diana: After it was over I left town. Alone and ashamed.

Diana: When I came back to the city last fall I was hoping to watch over you. From afar.
Chuck: Nate’s bed is not that far.
Diana: I didn’t intend for things to get as serious as they did with Nate. And then I thought, if you never find out the truth, what’s the harm.
Chuck: So what does it all mean? Now that I know.
Diana: That’s for you to decide.

Lola: Can I just ask why? Why do you do it?
Serena: I only became Gossip Girl recently. And right now it’s the only thing I have. It’s the only thing in my life that I can hold on to, you know, because a lot of times my life is just really out of control.
Lola: I get that, but you’re doing exactly what was done to you. And to everyone else.
Serena: I was hurt, sure, but I survived. A little adversity can actually be good for you. You’ll see how things really work around here.
Lola: No I won’t actually. I’m officially resigning from the Upper East Side. I have a whole life at Julliard where the drama’s reserved for the stage and I think I belong back there. So if you want the Upper East Side back it’s all yours. You’re the only It Girl that matters anyway. You’ve seen to that yourself.

Gossip Girl: The Upper East Side is filled with high rollers. Some people choose to bet on themselves. While others are happy to bet on someone else. But luck is a funny thing. It’s easy to accept it when it goes your way, but when it doesn’t…. Call it injustice, call it treachery. But remember, the most important rule in gambling is that the house always wins. You know you love me. XOXO. —Gossip Girl.