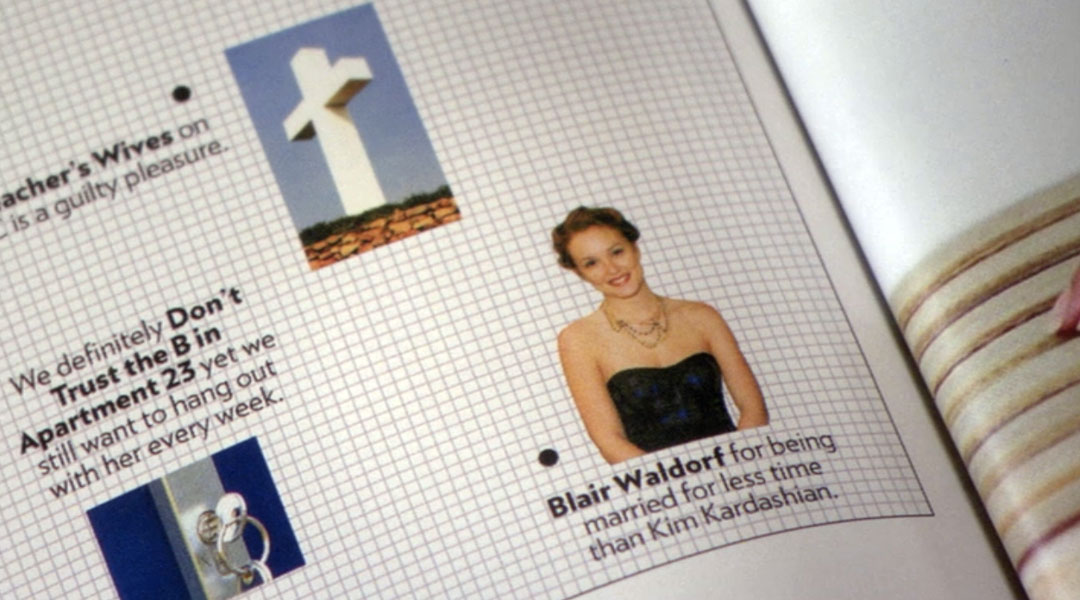 Gossip Girl: In our modern age there are so many ways for information to travel. And yet with all our tablets and smart phones, there are still some people who like to get their morning dish the old-fashioned way. Even without the Information Highway, good news always seems to travel fast. But bad news? Well, you know what they say…

Blair: What could be more important than strategizing ways to publicize yourself?
Dan: I don’t know, maybe the banking crisis or what’s going on in Syria, or…
Blair: Dan. You know you’re never going to be trending on Twitter if you choose those topics to discuss. You know, just be humble. Self-deprecating. With a tinge of intellectual superiority.

Ivy (Kaylee DeFer): Tell me Lily, how much exactly did you pay that nurse to lie for you? Because I have done nothing but love and care for Cece.

Reporter (Jessica Abo): Any truth to the rumors that you and your husband are no longer living together?
Lily: No. None at all.

Nate: I think you dialed the wrong number. Obviously you meant to call your son and not me.
Diana (Liz Hurley): I know the news of me being Chuck’s mother must have come as rather a big surprise to you.
Nate: You think?
Diana: But it doesn’t have to ruin anything between us.
Nate: Except for the small fact that every time I look at you now I see a Bass in my face.

Nate: I don’t know. I never really saw myself as a “sleep with your best friend’s mother guy”.

Lily: I know! We’ll have a big family dinner her tonight to celebrate our victory in court. And I’ll invite a reporter from the New York Social Diary to dispel all the rumors of family strife.
Serena: You think the way to handle this is by inviting the media into our home?
Lily: I’ll find a way to get Rufus here. You bring Lola.

Chuck: Nathaniel, were my ears playing tricks on me or did I hear you on the phone with a young lady earlier?
Nate: No, not exactly. Your mother called to talk to me.
Chuck: Well I’m not sure which one of us this is more awkward for.
Nate: Neither am I! Between my history with Diana and now yours? It’s just too weird to be even in business with her. I would love to find some funding and possibly buy her out for good. You interested?
Chuck: Unfortunately I’m still trying to decide what kind of relationship I want with her. Which means I’m not ready to put her out of business just yet.
Nate: What your saying is, since I already screwed her—
Chuck: I don’t need to also.

Dorota: You sure you want to read, Miss Blair? There are some bad things about friends in there.
Blair: Don’t you know me at all? I love reading bad things about my friends. It’s the only thing that makes me feel better about myself.

Blair: He’s high brow and I’m low brow for being married for less time than Kim Kardashian? I was so wrong, Dorota. All is not right in the universe. The universe is totally upended and we must right it immediately.
Dorota: And how you plan to do that?
Blair: I must become as high brow as Dan. This instant!

Gossip Girl: I’ve always been a daddy’s girl. But sometimes, the problem with fathers?
William (William Baldwin): Sorry about that. Now, where were we?
Lola: I think you were about to tell me how you found out that you were my dad.
Gossip Girl: Is that they can be real sons of bitches.

Lily: I’m sorry you’re upset with me, but I think it’s time we put our petty fighting behind us and move on. What do you say?
Rufus: I’d say that doesn’t sound like a real apology.
Lily: Well I’m not sure I’m the one that needs to apologize.
Rufus: Oh, you think I am. For what?
Lily: Taking Ivy’s side. Paying her way behind my back.
Rufus: She was basically homeless.
Lily: That’s because the home she’d been living in was mine.
Rufus: That’s exactly right, Lil. It was yours. Not ours.

Rufus: You see what we’re doing here? All this fighting and finger-pointing? I thought we were in this together. But you do whatever you feel like.
Lily: Oh, I could say the same thing about you.
Rufus: This isn’t the way a marriage is supposed to be—who’s wrong, who’s right. It doesn’t matter. What matters is that we’re in a partnership.
Lily: I couldn’t agree more.
Rufus: Then how about you give me a call when you’re ready to be a partner again.

Dan: Who was that guy?
Dorota: Some representative from FIT. More like similar word, but spelled S—
Blair: It doesn’t matter. How was the meeting with your publicist?
Dan: They just wanted to see me in person so they could tell me I’m one of the five people nominated for the New York Public Library’s 2012 Young Lions Fiction Award.

Gossip Girl: Lily may have wanted the perfect nuclear family, but this bomb is going to start a war.

Dan: Do I need to remind you that Lily is still your wife?
Rufus: Don’t tell me you’re on her side.
Dan: No, I’m not on any side. But you gave me some very good advice recently on the importance of equality in a relationship and if Lily is taking steps to make things better, how can you not at least try to do the same. That’s all.

Serena: I just found out that Lola’s not my cousin but she’s my sister. Which means Dad was having an affair with Carol while you were still married.
Lily: How did you hear this?
Serena: Well Dad lied to me about being out of town and then I saw him with Lola. And then Nate just told me that Lola spent the morning with her father.
Lily: Well there still could be some other explanation.
Serena: No, no, this is the explanation. It explains everything. Carol hiding Lola from us, hiring Ivy to be her. You know in your heart that this is the truth.

Lily: I want you to put this out of your mind, plaster on your best happy face and go get ready for the party. Will you do that for me?
Serena: If that’s what you want.

Nate: What’d you find out?
Andrew (Kevin Stapleton): That the first record of our Diana Payne was three years ago. Before that it’s like she didn’t exist.
Nate: So if Diana Payne’s not her real name, how do we ever find out her story?

Blair: How do I look?
Dorota: Suspicious. You heard Mr. Humphrey. Why are you dressed so fancy for casual book party?
Blair: I guess the opera gloves may be a bit much.
Dorota: I smell a scheme when I see one.

Blair: My point is: high brow despicable. That’s where you find all the headline-makers having all the fun. Gwyneth, Victoria Beckham, David Bloomberg. Those are my people, Dorota. And it is time I become one of them again.

Gossip Girl: Uh oh, Carol. Dinner’s over and it looks like Ivy just served you your last supper.

Lola: You realize this isn’t just hurting my mom, it’s hurting me too.
Lily: Your mother deserves to be punished. She defrauded all of us and we should have done this months ago.
Lola: You know—
Carol: Don’t listen to her, Lola. This has nothing to do with fraud. This is all because I slept with her husband two decades ago. But here’s the thing, Lily. I never would have been with William in the first place if he were happy with you.

Dan: Did you really feel the need to steal the spotlight from me tonight because I was above you on the back page of some magazine?
Blair: No. That’s ridiculous.
Dan: Is it? Because you said in your speech something about me being brilliant and “high-brow” and if it’s about that it’s a bit of an overreaction, don’t you think? I mean, you know none of that stuff means anything to me.
Blair: Well it means something to me, and it isn’t just about the magazine. I don’t want to live in someone else’s shadow anymore. I did it the whole year I was with Louis and then with Chuck before that. I am sick of being behind-the-scenes in a relationship.
Dan: You’re not behind-the-scenes with me. That’s what I love about us. We are equals in this.
Blair: Well that’s not how I feel. And it’s clearly not how other people view me.
Dan: Maybe you are so focused on how everyone else perceives you that you no longer know who you are. And that’s too bad, because if you could only see what I see…

William: I’m sorry for not being truthful with you today. And for cheating on your mother all those years ago.
Serena: That’s between you and mom. But you lied to me today to protect Lola. You left me when I was four years old, and when I tracked you down you wouldn’t even see me. All I ever wanted my whole life was a father and all you ever did was avoid me. And now when you find out about Lola you just rush to be by her side. Well you broke my mom’s heart. And now you just broke mine.

Rufus: You know I thought we’d grown together, but if this is who you want to be I don’t want to have anything to do with it.
Lily: Rufus, are you saying you’d like a divorce? Because where exactly are you going to find some Upper East Side woman to take care of you the way I have?
Rufus: Spoken like a true Rhodes.

Blair: You were right. The problem wasn’t your success. It was me. Somehow between being traded for a hotel and selling out for a tiara I lost my true self. But I want to be found. Could you possibly help?
Dan: I have a feeling that the Real Blair Waldorf is a lot closer than you think. Wasn’t all that long ago that she and I were working side-by-side at W. And I totally fell for her.
Blair: And what was that girl like?
Dan: That girl is fiercely strong. Independent. Outspoken. Beautiful. Capable of anything. And no man or magazine should be able to take that away from her.
Blair: She sounds great. I look forward to meeting her again.

Chuck: What if all this subterfuge over my mother’s identity is actually disguising the question. It’s not Who’s my mom? It’s Who’s my dad? Nate, I think Jack Bass is my father.