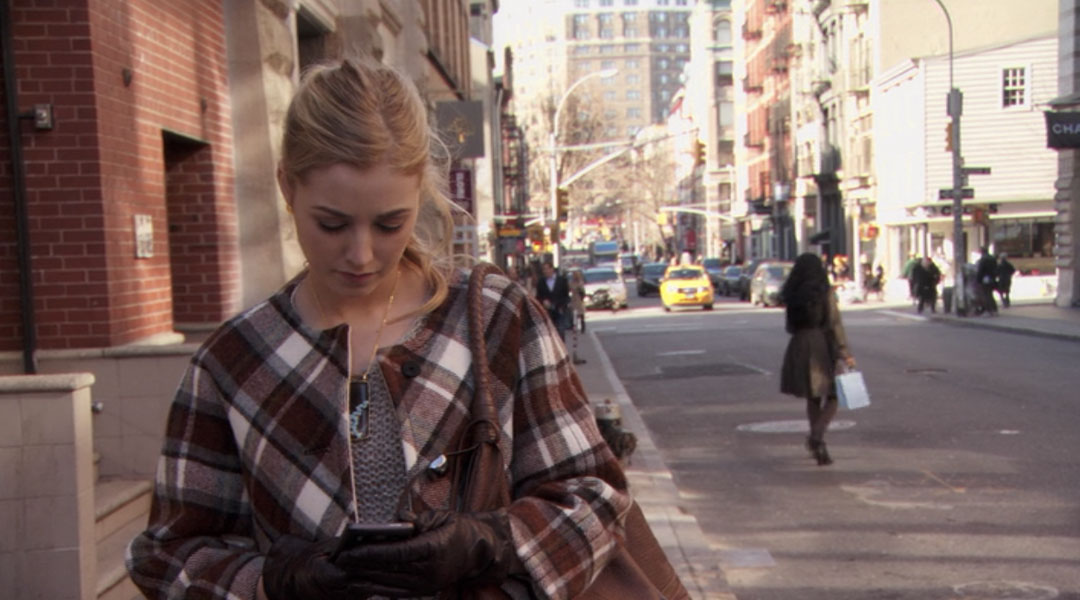 Gossip Girl: Every once in a while a life-changing event will arrive with fanfare and excitement.

Dorota: Miss Blair. Package from legal firm of Tierre, [?] and Booth.
Blair: Divorce papers! Oh sweet legal freedom. Thank god. I thought Louis was going to drag this on forever.
Dorota: Georgina move fast. What do you think she do to make happen?
Blair: It’s best we don’t think, Dorota. Georgina went black ops on this one. And while I’m sure I’m going to eventually pay a price for my plausible deniability, right now I’m just going to enjoy the bliss of ignorance.

Gossip Girl: In my experience, most turning points in our lives don’t announce themselves. If anything, they tend to creep up quietly. When we’re least expecting them. And force us to make a decision that isn’t so easy.

xoxo44: You’ve had Gossip Girl for a week. Give it back by the end of the day, or I’ll start to play dirty. Xo xo, GG.

Nate: Gotta get to the office. Diana’s finally making an appearance today.
Chuck: Ah. The two of you running The Spectator again. Ready for combat?
Nate: There’s no reason to think that we’ll have anything to fight about. She’s an investor and I’m still interim chief. I’m not worried about it.
Chuck: I told myself the same thing before my night with the Australian women’s softball team. Then ended up with a fractured rib and a tattoo of a kangaroo that I didn’t know I had for a month.

Serena: Hey, congratulations. Dorota told me it’s your first official day as a single woman.
Blair: It’s true. I am finally freed of the shackles of royal matrimony and Louis’ horrible family.

Serena: You know what’s strange? Ever since the real Gossip Girl’s been back I’ve barely been mentioned. I just, I wish there was a way to stay off her radar forever.
Blair: Oh please. It is your destiny to be gossip-worthy.

Blair: You really want out?
Serena: I’m ready to move on with my life and I can’t do that with Gossip Girl tracking my every move.
Blair: You need to replace yourself. Find a new Serena. Use your influence to anoint her the new It Girl. Retain control but stay out of the spotlight yourself.
Serena: Okay, well where do I start?
Blair: At the beginning of course, with a defining moment. I mean you didn’t really become Serena van der Woodsen until you got naked on that aircraft carrier.
Serena: You don’t need to make it sound like a porno. We were on a school trip and I wasn’t naked! I was wearing a dress.
Blair: A white, wet dress. A photo landed on Gossip Girl and that was it.

Serena: Now that you’re saying goodbye to being a princess does that mean you’re ready to reclaim your crown as Queen B?

Dan: Dorota, while your reputation for loyalty is unassailable, you and I both know something’s going on here. So why don’t you just leave the song lyrics on the table and step out of the room for a moment. You won’t see a thing.
Dorota: Only because I worried.

Diana Payne (Liz Hurley): Hello darling! Did you miss me?
Nate: What the hell are you doing?
Diana: You didn’t really think you’d get to keep your office, did you? Don’t worry you’re going to love your new cubicle.

Gossip Girl: Or you hit a wall when you were expecting a door.

Gossip Girl: But every now and then you get lucky. And the universe delivers the perfect solution. Get ready, Lola. Because whatever Serena wants, Lola’s going to get.

Rufus: I went to see Ivy. And I asked her if she might be willing to move out of the apartment if we unfroze the assets.
Lily: What? We do not negotiate with terrorists. Especially ones from Florida. And you do not have the right to speak on my behalf.
Rufus: I know. And I didn’t agree to anything. But sweetie, Ivy did.

Andrew Tyler (Kevin Stapleton): Your mother’s been living in Vienna for the past six months. I have an address and a mobile number but I haven’t made contact yet. How do you want me to proceed?
Chuck: I’m not sure. The fact that she was harder to find than a fugitive isn’t lost on me. Clearly that woman doesn’t want to be found.
Andrew: I don’t know that I can advise you, Chuck. At this point maybe you need a friend more than a private investigator.

Dan: Seriously? Diana is the only investor you could find?
Nate: Yeah well Chuck was going to step in but timing was off and he wasn’t liquid enough.
Dan: Chuck Bass wasn’t liquid? How is that possible?
Nate: I shouldn’t have even brought it up.
Dan: Why? Does this have to do with Blair? Oh Nate, if Chuck did something you’ve got to tell me.
Nate: It’s nothing bad. In fact it’s good. I don’t know why Chuck insists on keeping it quiet.
Dan: Well if it’s good then what’s the big deal, Nate? You know what I’m up against here. Come on.
Nate: Alright, fine. But you didn’t hear it from me, okay? Chuck didn’t have the money because he paid off Blair’s dowry.

Dorota: Why you lie to Mr. Dan about signing the papers?
Blair: Sneak up on me like that again and I’m going to start making you wear a bell.
Dorota: I want answer!
Blair: Divorce is a private matter. You’ll see for yourself some day. You want to make yourself useful call the car around.
Dorota: Only if you tell me why you don’t sign the papers. Otherwise you take taxi!

Gossip Girl: Word is that Diana and Nate are going to tonight’s Down to Your Skivvies party together. Guess their relationship just went from business to pleasure.

Blair: What I don’t understand is what you want from me?
Chuck: Just someone to talk to I guess. Someone who will understand. You met her. You know what I went through. Is it worth it to try and reach out again?
Blair: I don’t know, Chuck. But I’m not sure I’m the one to ask.
Chuck: Why? Because of Humphrey? Blair I’m not trying to work an angle here, I’m simply coming to you as a friend.
Blair: No you’re not. You’re working your way back into my life and you’re using your mother to do it.
Chuck: Blair—
Blair: I’m sorry if I sound harsh, but we both know we’ve never been good as friends. There’s always been an agenda. Am I wrong?
Chuck: No. You’re not wrong.

Gossip Girl: Everyone’s been talking about Manhattan’s latest arrival, Lola Rhodes. And word is that tonight you’re going to see a whole lot more of her.

Diana: Lola, maybe it’s time to show Aiden what you’re modeling tonight. Otherwise you might lose two men to me in one night.

Rufus: This isn’t what a marriage is, Lily. We have to be honest with each other.
Lily: I know, but this was an extreme situation. I did what had to be done.
Rufus: Maybe I’m just seeing more clearly because of the view from Brooklyn, but I’m not okay with this.

Lola: Where is my date going?
Nate: Exactly where we want him to.

Chuck: I just wanted you to be free. How you choose to live with that freedom is up to you.

Dan: So, ah, are you okay?
Blair: Yeah. I guess I’m just not used to seeing Chuck do anything selfless.
Dan: Yeah well people can surprise us. Even Chuck.

Gossip Girl: Spotted: Serena van der Woodsen blowing off the Kiki fashion show. Looks like this party just went from so hot to so not.

Andrew: I don’t think you should contact that chick.
Chuck: Look, I appreciate you looking out for me, but I decided I want to try and have a relationship with my mother.
Andrew: That’s the thing. Elizabeth is not your mother. I made contact. She swore it wasn’t her who donated the blood. Said she was in a monastery in Tibet at the time.
Chuck: A monastery, she’s lying. She’s good at that.
Andrew: I looked into it. Her story checks out.
Chuck: Keep looking. Someone donated that blood. I want to know who.

Blair: The sun hasn’t set. I feel like a prom queen doing the walk of shame.

Gossip Girl: It turns out that Lola staged that photo of herself in a fireman’s jacket. How desperate. Doesn’t she realize there can only be one “It Girl” on the Upper East Side and that will always be Serena van der Woodsen?

Gossip Girl: Sometimes we fight for something only to discover that by the time we get it our goals have changed. For some, it’s too late. The lines have been drawn. And the damage has been done. But other times you get the thing you always wanted. Only to find out it isn’t what you really need. Get ready kids, I’m back. And this time I’m here to stay. XOXO. —Gossip Girl.