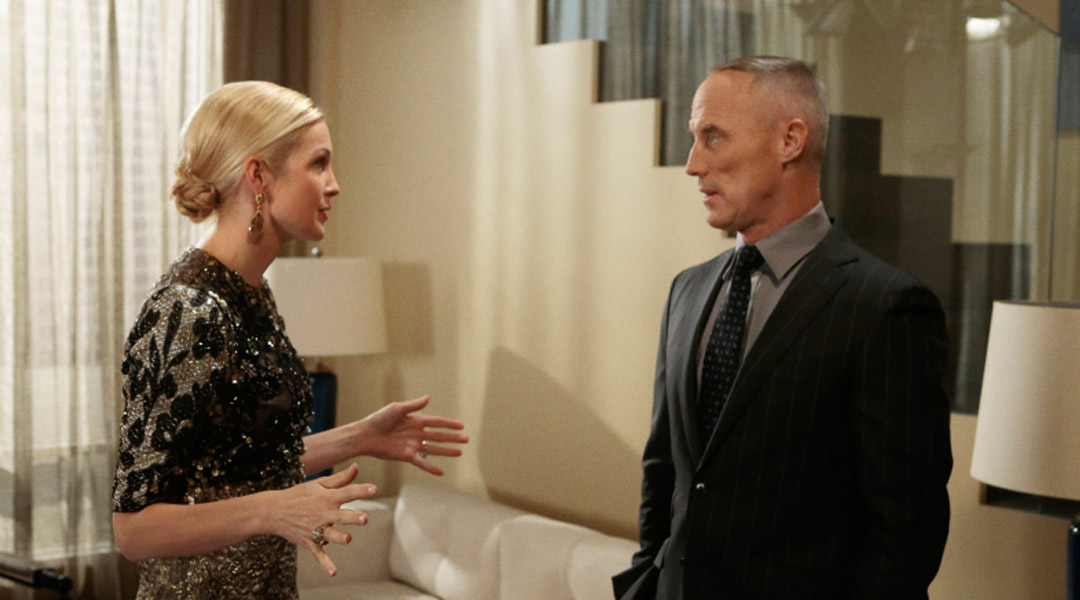 Vanya: You both look so relaxed. Hamptons good for the soul, huh?
Lily: Well yes, the Hamptons were lovely, but nothing compared to the Seychelles where Bart and I renewed our vows.
Bart Bass (Robert John Burke): Which was restorative. But our time with Eric off the African coast was the highlight.
Vanya: Any word from Mr. Chuck?
Lily: Well we’re hoping Charles used his summer to relax as much as we have.
Vanya: Well I’m sure as soon as he sees what a happy couple you are, happy family won’t be far behind.
Bart: I’m not so sure.

Bart: Look at all this. It’ll take weeks to get through. I thought Serena was keeping the apartment in order.
Lily: Well that was the deal. And since she’s been ignoring my texts—our primary mode of communication—I assumed she was taking care of it. Vanya, when is Serena going to be back?
Vanya: Miss Serena? I haven’t seen her all summer.

Lily: Charles. You shouldn’t have to come home. But I am so glad you did.
Chuck: Of course.
Lily: And you’re not alone.
Amira (Andrea Gabriel): Amira [?]. Hello.
Chuck: Amira’s a new friend. We met in Dubai.

Rufus: Lily. What are you doing here? I thought you and Bart were circling the globe on an eighty-foot yacht.
Lily: Well the yacht was a hundred and ten feet and most people who’ve actually been on one call it a boat.
Rufus: I assume you didn’t come all the way to Brooklyn to tell me that.
Lily: No. I didn’t come here to tell you anything, I came here to ask if you’ve seen Serena. She’s missing and I thought she might have sought out Dan.
Rufus: Well Dan’s in Italy and I haven’t seem or heard from Serena.
Lily: Oh really? Is that why her sweater’s here? Rufus, you have reached an all-time low. I mean first you let her hide here and then you lie to me, right to my face.
Rufus: That’s not Serena’s sweater.
Ivy walking in: It’s mine.
Lily: What is going on here?
Rufus: Ivy’s been staying here.
Lily: Here? With you?
Ivy: Lily, could I get you a glass of water? You don’t look well.
Lily: I assure you, I am quite alright. {to Rufus} Unlike you.
Ivy: There’s nothing wrong with Rufus. He saved me. After I tore up your check you wrote me I had nothing. I was on the verge of doing something desperate and Rufus opened his home to me. Gave me a second chance.
Rufus: I don’t know why it matters to you but she’s sleeping in Dan’s room.
Lily: It doesn’t matter to me. None of it does. My daughter is missing—god knows what happened to her—and I don’t know why she would ever think of coming here.

Rufus: I know I’m not exactly a welcome house guest these days, but we shouldn’t let our recent history overshadow our past.
Lily: Thanks. I appreciate it. How could I have thought it was okay to go all summer without actually talking to my own daughter?
Rufus: Whatever this is, Lil, isn’t your fault.
Lily: And why should I believe that?
Rufus: Because that’s what you told me when Jenny ran away. And she was much younger and crazier. With much heavier eye makeup than Serena.

Rufus: Don’t say anything you’re going to regret.
Lily: I have no regrets, Rufus. Other than I let you in my home today.
Rufus: I’m already leaving.
View all quotes from Gone Maybe Gone

Bart: I know how important family is to you, Lily. But I think you may need to accept that my son may no longer want to be a part of ours.
Lily: Well I’m not ready to give up hope yet.

View all quotes from High Infidelity

Where the Vile Things Are

Rufus: Ivy can afford any painting she wants.
Lily: Oh with what money? I know it’s not yours.
Rufus: You’re right. It’s Cece’s.

Lily: What is it you want then?
Ivy: To make you feel the way you’ve made us feel. Humiliated and powerless and like you’re worth nothing. So if you’ll excuse me, I’m going to make sure they’re packing up our painting.

Lily: And you remain a kept man.
Rufus: I never thought I would say this, Lil, but Ivy’s right. You brought this on yourself.

View all quotes from Where the Vile Things Are

Save the Last Chance

Lily: What in the world are you doing here?
Rufus: I know I said I wouldn’t help you but I changed my mind. {he hands her the microfilm}

Lily: What made you change your mind?
Rufus: Ivy’s not who I thought she was. I know. I should have been tipped off by the whole “pretending to be your niece” thing.
Lily: Well. You always believe the best in people. It’s your virtue and your downfall.
Rufus: I still see the best in you, Lil. After everything we’ve been through it’s probably safe to say that we won’t be together again. But we were family for a long time. And that means something. I’d really like peace between us.

Chuck: If you destroy that evidence there is nothing to stop him from hurting anyone, including you.
Lily: That’s ridiculous, Charles. He would never hurt me. Since his return h has done nothing but prove his love.
Chuck: You once told me my father was incapable of love. That is the truth. I just saw him in a hotel room, half-naked, with Ivy.
Lily: That lie is beneath even you, Charles. I’m not going to let you or anyone else threaten our family ever again. {she throws the microfilm in the fire}
Chuck: Don’t! {too late}

View all quotes from Save the Last Chance

Dan: Aren’t you supposed to be on a tropical beach where no one pays capital gains tax?
Bart: Tropical storm. Our flight was delayed.
Lily: So it looks like we’ll be staying for dinner after all.
If we’re not imposing.
Dan: Ah… nope. Not at all. I mean we have plenty of food, we’ll just… we’re gonna need to change up the seating arrangements.

Chuck: Lily, what are you doing here?
Lily: I live here. And I hope that your presence here today means that you’re going to apologize to your father and put this feud behind you.
Chuck: The problem with putting Bart behind me is that then he can stab me in the back.

Bart: Lily, please. This is just another one of Chuck’s games.
Lily: When I asked you about the oil deal, you promised me that no one got hurt.
Bart: And no one did. At least not by me.
Lily: So Bruce and the Sheikh’s death were just pure coincidence.
Bart: Yes. Are you questioning me?
Lily: Maybe I should start.
Bart: All I did was protect you.
Lily: By lying to me.
Bart: I never lied to you.
I told you, no one got hurt.
Lily: You’re hurting me right now.
Bart: Chuck is just getting to you. And he won’t stop until I make him.

Chuck: Maybe you can sit down, I can get you a glass of water.
Lily: Oh Charles, I forgot how sweet you are.
Chuck: The only thing that matters is that you finally know the truth.
Lily: I do, and I’m sorry.
Bart: What on earth do you have to be sorry for?
Chuck: For believing all your lies.
Lily: No, actually I was just going to tell Charles how sorry I am for trying to force a reconciliation between the two of you. I know that will never happen and I should have accepted it sooner.
Chuck: Happy Thanksgiving to you too, Lily.

Chuck: Lily, I’ve had all the stepmothering I can handle for one day.
Lily: Charles, please listen to me. I’m a fool for trusting your father all this time. That’s what I was trying to apologize to you for before–
Chuck: Bart interrupted.
Lily: I’m on my way to Miraval for a week and I’m scared to be around your father, and I fear he’s coming after you too.
Chuck: I’m well aware. Unfortunately I think there’s little I can do to stop him. Bruce Caplan and the Sheikh’s death just won’t stick in court without hard evidence. And you made S’mores of all the financial records.
Lily: Not before I carefully read each film with Cece’s jeweler’s loop. She always said that was the best way to catch a husband in a lie. I know she was referring to low-grade diamonds, but still… I’ll send you everything I can remember.
Chuck: Thank you.
Lily: It’s the least I can do. Charles. Be safe.