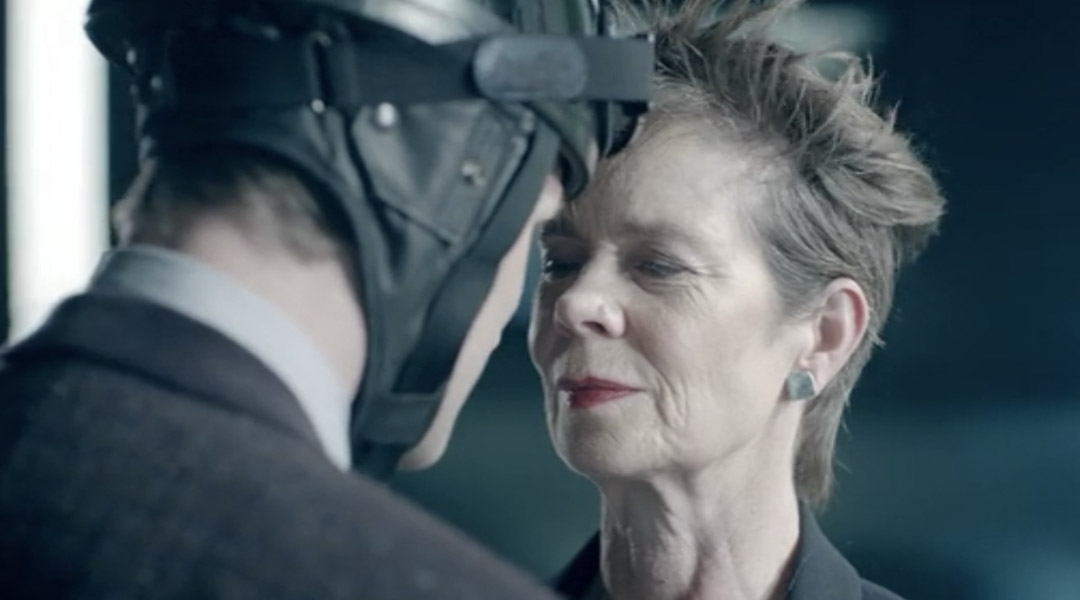 Nabile (Manpreet Bachu): Danger. This is a warning. A warning to the whole world. You’re looking for WiFi. Sometimes you see something. A bit like this{holds up a sign}. Don’t click it. Do not click it. Once you’ve clicked it, they’re in your computer. They can see you. If they can see you, they might choose you. And if they do, you die. In 24 hours you’re dead. For a while. People’s souls are being uploaded to the internet. Some people get stuck. Their minds—their souls—trapped in the WiFi.
Echoing Voice: I don’t know where I am.
Nabile: Like echoes. Like ghosts. Sometimes you can hear their screams. On the radio. On the telly. On the net. This is real. This is not a hoax. Or a joke. Or a story. This is real and I know that. Because I don’t know where I am. Please. Please, if you can hear me. If you can hear this. I don’t know where I am.

Paul (Sean Knopp): Wake the Abbott. The bells of Saint John are ringing!

Paul: They call him the Mad Monk, don’t they?
The Abbott (James Greene): They shouldn’t. He’s definitely not a monk.

The Abbott: I’m sorry to intrude. The bells of Saint John are ringing.
The Doctor: I’m going to need a horse.

Paul: Is that her?
The Abbott: The woman twice dead. And her final message. He has withdrawn to this place of peace and solitude that he might divine her meaning. If he truly is mad then this is his madness.

The Doctor about his ringing TARDIS: That is not supposed to happen!

Clara entering the password: “Run you clever boy, and remember. 1-2-3.”

Alexei (Dan Li): Clara Oswald. We’ve got a positive lock on her but I think she’s borderline. Very clever but no computer skills.
Miss Kizlet (Celia Imrie): Upload her anyway. Splice her a computer skills package.
Alexei: I’ll activate a spoonhead.
Miss Kizlet: Alexei, we call them servers, not spoonheads.

Miss Kizlet: I’m ever so fond of Alexei, but my conscience says we should probably kill him.
Mahler (Robert Whitelock): I’ll inform HR.
Miss Kizlet: Actually, he’s about to go on holiday. Kill him when he gets back. Let’s not be unreasonable.

Mahler: We’re uploading too many people too quickly. We’re going to get noticed.
Miss Kizlet: If your conscience is bothering you, think of it like this: we’re preserving living minds in permanent form in the data cloud. It’s like immortality. Only fatal.
Mahler: My conscience is fine.
Miss Kizlet: Good. Because our client has his needs.

Mahler: Did you just hack me?
Miss Kizlet: Because you changed your mind?
Mahler: I hope I did.

The Doctor: Please! I just need to speak to you.
Clara: Why are you still here? Why are you here at all?
The Doctor: Oi! You phoned me. You were looking for the internet.
Clara: That was you?
The Doctor: Of course it was me.
Clara: How’d you get here so fast?
The Doctor: I just happened to be in the neighborhood. On my mobile phone.
Clara: When you say, “mobile phone”, why do you point at that blue box?
The Doctor: Because it’s a surprisingly accurate description!

The Doctor: Right! Don’t be a monk! Monks are not cool.

The Doctor: Not this time, Clara. I promise you.

Miss Kizlet: Well?
Mahler: Our hacker sent us a message. {Under my protection —The Doctor}. I assume he’s talking about the girl.

Miss Kizlet: Sir. The one you told me about, he’s here. The Doctor is here.

The Doctor: Are you all right?
Clara: I’m in bed.
The Doctor: Yes!
Clara: Don’t remember going.
The Doctor: No.
Clara: What did I miss?
The Doctor: Oh! Quite a lot, actually. Angie called. She’s going to stay over at Nina’s. Apparently that’s all completely fine and you shouldn’t worry like you always do, for God’s sake, get off her back. Also, your dad phoned. Mainly about the government. He seems very cross with them. I’ve got several pages on that. I said I’d look into it. I fixed that rattling noise in the washing machine, indexed the kitchen cupboards, optimized the photosynthesis in the main flower bed and assembled the quadricycle.
Clara: Assembled the what?
The Doctor: I found a disassembled quadricycle in the garage.
Clara: I don’t think you did.
The Doctor: I invented the quadricycle.

Clara: What happened to me?
The Doctor: Don’t you remember?
Clara: I was scared. Really scared. Didn’t know where I was.
The Doctor: Do you know now?
Clara: Yes.
The Doctor: Well then, you should go to sleep. Because you’re safe now. I promise. Goodnight, Clara.

Clara: Are you going to explain what happened to me?
The Doctor: There’s something in the WiFi.
Clara: Okay.
The Doctor: This whole world is swimming in WiFi. We’re living in a WiFi soup. Suppose something got inside it.

The Doctor: Suppose there was something living in the WiFi. Harvesting human minds. Extracting them. Imagine that. Human souls trapped like flies in the World Wide Web. Stuck forever. Crying out for help.
Clara: Isn’t that basically Twitter?

Clara: What was that face for?
The Doctor: A computer can hack another computer. A living, sentient computer… maybe that could hack people. Edit them, rewrite them.
Clara: Why would you say that?
The Doctor: Because a few hours ago you knew nothing about the internet. And you just made a joke about Twitter!

The Doctor: You were uploaded for a while. Wherever you were, you brought something extra back. Which I very much doubt you’re going to be allowed to keep.

Mahler: Do we need another London-wide activation? We can’t always pass it off as a riot.

Clara: Our lights are on, everybody else is off. Why?
The Doctor: Some planes have WiFi.
Clara: I’m sorry?
The Doctor: We must be one hell of a target right now. {they see an airplane approaching} You, me, box, now!

Clara: What’s going on? Is this real? Please tell me what is happening!
The Doctor: I’m The Doctor. I’m an alien from outer space. I’m one thousand years old, I’ve got two hearts and I can’t fly a plane! Can you?
Clara: No.
The Doctor: Oh. Fine. Well let’s do it together.

The Doctor: Would a victory roll be too showy-offy?
Pilot (Antony Edridge): What the hell’s going on?
The Doctor: Well I’m blocking your WiFi so you’re waking up for a start. Tell you what, do you wanna drive?

Clara: Okay. When are you going to explain to me what the hell is going on?
The Doctor: Breakfast.
Clara: What? I ain’t waitin’ for breakfast!
The Doctor: It’s a time machine. You never have to wait for breakfast.

Clara: So this is tomorrow then? Tomorrow’s come early.
The Doctor: No, it came at the usual time. We just took a shortcut. Thank you! Thank you! Tomorrow, a camel.

Mahler: What’s happening?
Alexei: Blue box. Southbank. Definitely wasn’t there five minutes ago.
Mahler: Are we sure this time? Earl’s Court was an embarrassment.

The Doctor: I don’t take the TARDIS into battle.
Clara: Because it’s made of wood?
The Doctor: Because it’s the most powerful ship in the universe and I don’t want it falling into the wrong hands.

Clara: So if we can travel anywhere in time and space, why did we travel to the morning? What’s the point in that?
The Doctor: Whoever’s after us spent the whole night looking for us. Are you tired?
Clara: Yes.
The Doctor: Well then imagine how they feel! They came the long way around.

The Doctor: The security is absolute.
Clara: It’s never about the security. It’s about the people.

Barista (Fred Pearson): You realize you haven’t the slightest chance of saving your little friend.

Waitress (Jade Anouka): Now I want you to take a look around. Go on. Have a little stroll. And see how impossible your situation is. Go on. Take a look. I do love showing off.

The Doctor: You okay?
Clara: Sure. Setting up stuff. Need a username.
The Doctor: Learning fast.
Clara: Clara Oswald for the win. {thinking} Oswin!

Miss Kizlet: The people of this world are in no danger whatsoever. My client requires a steady diet of living human minds. Healthy, free-range human minds. He loves and cares for humanity. In fact he can’t get enough of it.
The Doctor: It’s obscene. It’s murder.
Miss Kizlet: It’s life. The farmer tends his flock like a loving parent. The abattoir is not a contradiction. No one loves cattle more than Burger King.

Mahler: Who’s on Facebook? Uh, Bebo? Myspace? Habbo? {everyone raises their hand}. Put your hands down if you didn’t mention where you work. {no one lowers their hands}

Mahler: Should we pulp her? Or keep her as a hostage?
Miss Kizlet: There’s no point. She’s fully integrated now. She can’t be downloaded again. I’m sure he knows that.
Alexei: I’m not sure he does. He’s coming.

Man with Chips (Matthew Earley): Really, Doctor? A motorbike. It hardly seems like you.
The Doctor: I rode this in the Anti-Grav Olympics, 2074. I came last.
Man with Chips: The building is in lock-down. I’m afraid you’re not coming in.
The Doctor: Did you even hear the word, “anti-grav”?

Alexei: Seriously? He can do that? He can really actually do that?
Miss Kizlet: Oh dear—
Man with Chips: —lord.
{There’s a great crashing of glass}
Mahler: I think that was your office.
Miss Kizlet: Excuse me. I believe there’s someone to see me.

Mahler: You have no right to be in this office and I am demanding that you leave at once!
UNIT Soldier: This building is under UNIT’s control .
Mahler: What is UNIT? Never heard of you.
UNIT Soldier: I suggest you calm down, sir.

Miss Kizlet: Where are my mummy and daddy? They said they wouldn’t be long. Are they coming back?

Clara: So. He comes back, does he?
The Doctor: You didn’t answer my question.
Clara: What question?
The Doctor: You don’t seem like a nanny.
Clara: I was going to travel. I came to stay for a week before I left and during that week…
The Doctor: She died. So you’re returning the favor. But 101 Places to See, and you haven’t been to any of them, have you? That’s why you keep the book.
Clara: I keep the book because I’m still going.
The Doctor: But you don’t run out on the people you care about. Wish I was more like that.

The Doctor: You know, the thing about a time machine though, you can run away all you like and still be home in time for tea. So what do you say? Anywhere. All of time and space right outside those doors.
Clara: Does this work?
The Doctor: Eh?
Clara: Is this actually what you do? Do you just crook your finger and people just jump in your snog box and fly away?
The Doctor: It is not a snog box!
Clara: I’ll be the judge of that.
The Doctor: Starting when?
Clara: Come back tomorrow. Ask me again.
The Doctor: Why?
Clara: ‘Cause tomorrow I might say yes.

The Doctor: Clara, in your book there was a leaf. Why?
Clara: That wasn’t a leaf. That was page one.

The Doctor: Right then, Clara Oswald. Time to find out who you are.