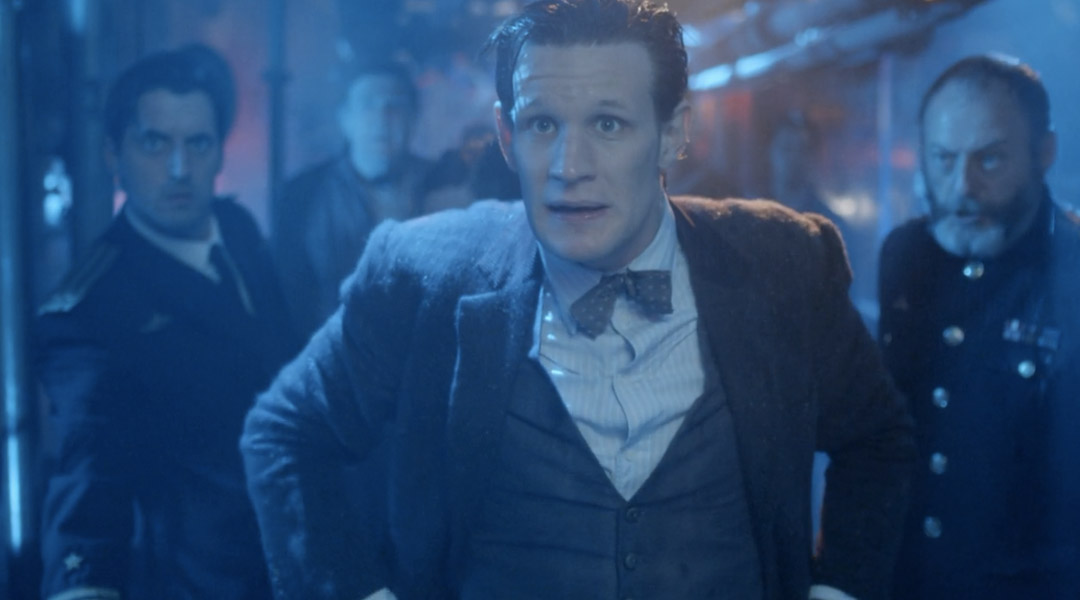 Piotr (Josh O’Connor): What are you, Milaya Moya? The Professor wants you thawed out back in Moscow, but life’s too short to wait.

The Doctor: Viva Las Veg—augh!
Intruder on the bridge!
Captain Zhukov: Who the hell are you?
Clara: Not Vegas then?
The Doctor: No! But this is much better!
Clara: A sinking submarine?
The Doctor: A sinking Soviet submarine.

Captain Zhukov: It seems we owe you our lives. Whoever you are.
The Doctor: I’ll hold you to that. It might come in handy.

Clara: Are we going to be okay?
The Doctor: Oh yes.
Clara: Is that a lie?
The Doctor: Possibly. Very dangerous time, Clara. East and West standing on the brink of nuclear oblivion. Lots of itchy fingers on the button.
Clara: Isn’t it always like that?
The Doctor: Sort of, but there are flash points and this is one of them. Hair, shoulder pads, nukes. It’s the 80s. Everything’s bigger.

Captain Zhukov: This sinking is just a coincidence, is it? Who are you?
The Doctor: Alright, Captain. Alright. You know what, just this once, no dissembling, no psychic paper, no pretending to be an Earth ambassador. Doctor. Me. Clara. Time travellers. Clara, you okay?
Clara: Think so.
Captain Zhukov: Time travellers?
The Doctor: We arrived out of thin air. You just saw it happen.
Professor Grisenko: I didn’t!
The Doctor: Your problem, mate. Not mine.

The Doctor: Just hear me out. You’re confused, disorientated. Of course you are. You’ve been lying dormant in the ice for, for for how long? How long, Professor?
Professor Grisenko: By my reckoning, five thousand years.
The Doctor: Five thousand years. That’s a hell of a nap. Can’t blame you if you got out on the wrong side of bed.

Clara: You… know him?
The Doctor: Sovereign of the Tharsyssian caste.
Vanquisher of the Phobos heresy. The greatest hero the proud Martian race has ever produced.
Captain Zhukov: So what do we do now?
The Doctor: Lock. Him. Up.

The Doctor: The Ice Warriors have a different creed, Clara. A different code. By his own standards, Skaldak is a hero. And it was said his enemies honored him so much they’d carve his name into their own flesh before they died.
Clara: Oh yeah. Very nice. He sounds lovely.
Captain Zhukov: An Ice Warrior? Explain.
The Doctor: There isn’t time.
Captain Zhukov: Try me.
The Doctor: Martian reptile known as the Ice Warrior. When Mars turned cold they had to adapt. They’re biomechanoids, cyborgs, built themselves survival armor so they could exist in the freezing cold of their home world. But a sudden increase in temperature and the armor goes haywire.
Clara: Like with the cattle prod thing?
The Doctor: Like that cattle prod thing. Bit of a design flaw, to be honest. I’ve always wondered why they never sorted it. Oh look, you’re got me telling you about them and I said there wasn’t time!
Clara: Is he that dangerous?
The Doctor: This one is.

Skaldak: Find me, my brothers. If you are still out there. Find me.

Clara: Are they?
The Doctor: Yes! They’re Russians!

The Doctor: All we needed to do is let Skaldak go. And he’d have forgotten us. But you attacked him. You declared war. “Harm one of us and you harm us all.” It’s the ancient Martian code.

Professor Grisenko: I think he wants to speak to the organ grinder, not to the monkey.
Clara: I heard that.

Clara: Doctor, something’s wrong.
The Doctor: What?
Clara: Something’s… {she opens the helmet to find an empty shell} It’s not there, it’s gone!
The Doctor: Gone? Gone? Gone. What do you mean “gone”?
Clara: It’s got out!

Skaldak: It is time I learned the measure of my enemies. And what this vessel is capable of.
The Doctor: No no no. Skaldak!
Skaldak: Harm one of us, and you harm us all. By the moons, this I swear!

Captain Zhukov: Won’t it be more vulnerable out of its shell?
The Doctor: No. It’ll be more dangerous.

The Doctor: Skaldak got no answer from his Martian brothers. Now he’s given up hope.
Captain Zhukov: Hope of what?
The Doctor: Of being rescued.
He thinks he’s been abandoned. He’s got nothing left to lose.

Captain Zhukov: Well what can he do? Stuck down here like the rest of us. How bad can it be?
The Doctor: This sub’s stuffed with nuclear missiles, Zhukov. It’s fat with them. What do you think Skaldak’s going to do when he finds that out? How bad can it be? How bad can it be? It couldn’t be any worse. {the sub starts shifting} Okay. Spoke too soon.

Lieutenant Stepashin: What do you want with me?
Skaldak: Much.

Captain Zhukov: Comrades, you know our situation. The reactor is drowned. We are totally reliant on battery power and our air is running out. Rescue is unlikely. But we still have a mission to fulfill. If The Doctor is right, then we are all that stands between this creature and the destruction of the world. Control of one missile is all he needs. We are expendable, comrades. Our world is not. I know I can rely on every one of you to do his duty without fail. That is all.

The Doctor: We split up and comb the sub. One team stay here to guard the bridge.
Captain Zhukov: That’s it? That’s the plan?
The Doctor: Well it’s either that or we stay here and wait for him to kill us.

The Doctor: Professor, I could kiss you!
Professor Grisenko: If you insist.
The Doctor: Later.

Professor Grisenko about his sharpshooting: See? I don’t just like Western music.

Skaldak: My distress call has not been answered. It will never be answered. My people are dead. They are dust. There is nothing left for me except my revenge.

Captain Zhukov: Very well. We’ll negotiate but from a position of strength.
Skaldak: Excellent tactical thinking, Captain. My congratulations, Captain.
Captain Zhukov: Thank you.
Skaldak: Unfortunately your position is not, perhaps, as strong as you might hope.

The Doctor: Where is the honor in condemning billions of innocents to death? Five thousand years ago Mars was the center of a vast empire, the jewel of this solar system. The people of Earth had only just begun to leave their caves. Five thousand years isn’t such a long time. They’re still just frightened children. Still primitive. Who are you to judge them?
Skaldak: I am Skaldak. This planet is forfeit under Martian law.
The Doctor: Then teach them. Teach them, Grand Marshal. Show them another way. Show them there is honor in mercy. Is this how you want history to remember you? Grand Marshal Skaldak, destroyer of Earth. Because that’s what you’ll be if you send those missiles. Not a soldier. A murderer. Five billion lives extinguished, no chance for good byes. A world! A world snuffed out like a candle flame !Alright. Alright, Skaldak. You leave me no choice. I’m a Time Lord, Skaldak! I know a thing or two about sonic technology myself.
Skaldak: A threat? You threaten me, Doctor?
The Doctor: No. No, not you. All of us. I will blow this sub up before you can even reach that button, Grand Marshal. Blow us all to oblivion.
Skaldak: You would sacrifice yourself?
The Doctor: In a heartbeat.
Skaldak: Mutually assured destruction.
The Doctor: Look into my eyes, Skaldak. Look into my eyes. Tell me you’re capable of doing this. Hm? Can you do that? Dare you do that? Look into my eyes, Skaldak! Face to face!
Skaldak: Well, Doctor? Which of us shall blink first?

Clara: Why did you hesitate? Back there. In the dark. You were going to kill this man, remember? I begged you not to and you listened. Why show compassion then, Skaldak, and not now? The Doctor’s right. Billions will die. Mothers, sons, fathers… daughters. Remember that last battle, Skaldak? Your daughter. You sang the songs.
Skaldak: Of the red snows.

Clara: What’s happening?
Skaldak: My people live. They have come for me.

The Doctor: We’ve surfaced. Your people have saved us.
Skaldak: Saved me and not you.
The Doctor: Just go, Skaldak. Please. Please, go in peace.