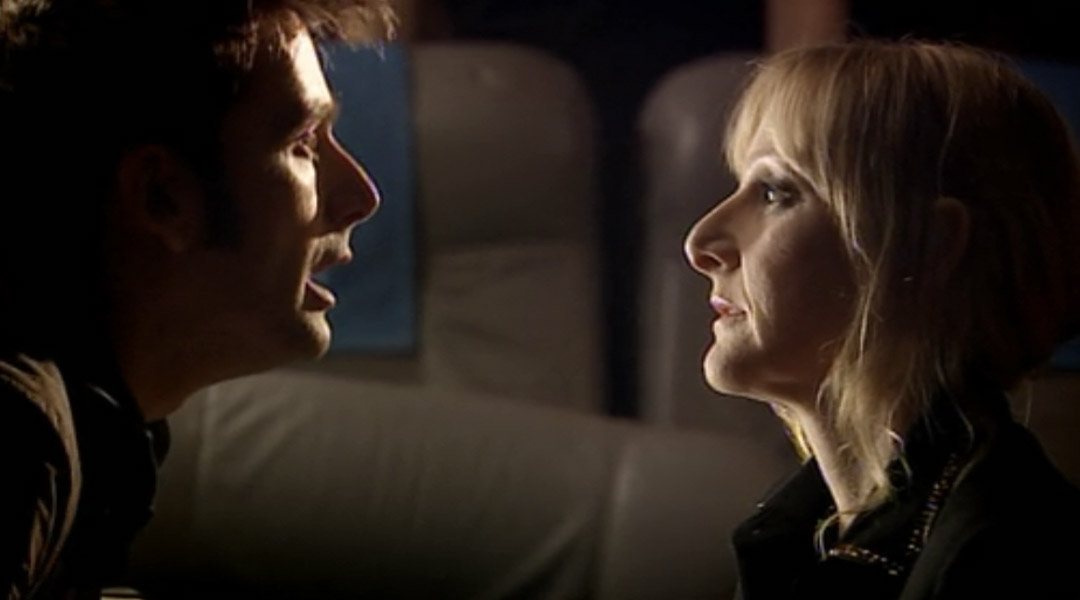 Donna: I said, no!
The Doctor: Sapphire Waterfall. It’s a waterfall made of sapphires! This enormous jewel the size of a glacier reaches the Cliffs of Oblivion and then shatters into sapphires at the edge. They fall a hundred thousand feet into a crystal ravine.
Donna: I bet you say that to all the girls.
The Doctor: Oh, c’mon! They’re boarding now. It’s no fun if I see it on my own. Four hours, that’s all it’ll take.
Donna: No, that’s four hours there and four hours back. That’s like a school trip.

The Doctor: Alright. I give up. I’ll be back for dinner and we’ll try that anti-gravity restaurant. With bibs.
Donna: That’s a date. Well not a date. Oh you know what I mean. Oh get off.
The Doctor: See ya later.
Donna: Oy! And you be careful. Alright?
The Doctor: Ah! Taking a big space truck with a bunch of strangers across a diamond planet called Midnight. What could possibly go wrong.

Hostess (Rakie Ayola): I must warn you some products may contain nuts.
The Doctor: That’d be the peanuts.
Hostess: Enjoy your trip.
The Doctor: Oh I can’t wait. Allons-y!
Hostess: I’m sorry?
The Doctor: It’s French. For “let’s go.”
Hostess: Fascinating.

Hostess: Ladies and gentlemen and variations thereupon, welcome on board the Crusader 50.

Hostess: Fire exit to the rear and, should we need to use it, you first!

Dee Dee Blasco (Ayesha Antoine): I’m just a second-year student. I wrote a paper on the Lost Moon of Poosh. Professor Hobbes read it, liked it, took me on as research just for the holidays. Well. They say research, most of the time he’s got me fetchin’ and carryin’. But it’s all good experience.
The Doctor: And did they ever find it?
Dee Dee: Find what?
The Doctor: The Lost Moon of Poosh.
Dee Dee: No, not yet.
The Doctor: Well, maybe that’ll be your great discovery one day. {raising a glass.} Here’s to Poosh.
Dee Dee: Poosh!

The Doctor: I’ve done plenty of that—travelling on my own. I love it! Do what you want, go anywhere.
Sky Silvestry (Lesley Sharp): Well I’m still getting used to it. I found myself single rather recently, not by choice.
The Doctor: What happened?
Sky: Oh the usual. She needed her own space, as they say. A different galaxy in fact. I reckon that’s enough space, don’t you?
The Doctor: Yeah. My friend went to a different universe.

Sky: Oh. What’s this? Chicken or beef?
The Doctor: I think it’s both.

Professor Hobbes (David Troughton): Before the Leisure Palace Company moved in, no one had come here in all eternity. No. Living. Thing.
Jethro (Colin Morgan): But… how do you know? I mean if no one can go outside.
Val (Lindsey Coulson): Oh, his imagination. Here we go.
The Doctor: He’s got a point though.

Claude: Look at all those diamonds, poisoned by the sun. No one can ever touch them.

The Doctor: I’ve spoken to the Captain. I can guarantee you, everything’s fine. Two loud knocks come from outside.

Sky as the banging continues: It’s coming for me!

Jethro: That noise from outside. It’s stopped.
Val: Well thank god for that.
Jethro: But what if it’s not outside anymore? What if it’s inside?

The Doctor (and Sky): Now then, Sky. Are you Sky? Is Sky still in there? Mrs. Silvestry? You know exactly what I’m going to say. How are you doing that? Roast beef! Bananas! The Medusa Cascade. Bang! Rose Tyler Martha Jones Donna Noble TARDIS! Shamble bobble dibble dooble. Oh Doctor, you’re so handsome. Yes I am! Thank you. A-B-C-D-E-F-G-H-I-J-K-L-M-N-O…

Jethro; That’s not her, is it? That’s not Mrs. Silvestry anymore.
The Doctor: I don’t think so, no.

The Doctor: I think… the more we talk the more she learns. Now I’m all for education but in this case… maybe not.

The Doctor (and Sky): If you try to throw her out that door you’ll have to get past me first.
Hostess (and Sky): Okay.
Biff (and Sky): Fine by me.

Jethro (and Sky): Thing is though, Doctor, you’ve been loving this.
The Doctor (and Sky): Oh, Jethro. Not you.

Biff: No one’s called John Smith! Come off it!

Jethro: Look, it’s passed into the Doctor, it’s transferred. Whatever it is, it’s gone inside him.
Dee Dee: No. That’s not what happened.

Dee Dee: I wouldn’t touch her.
Biff: But it’s gone, she’s clean. It passed into him.
Dee Dee: That’s not what happened.

The Doctor: The Hostess. What was her name?
Hobbes: I don’t know.