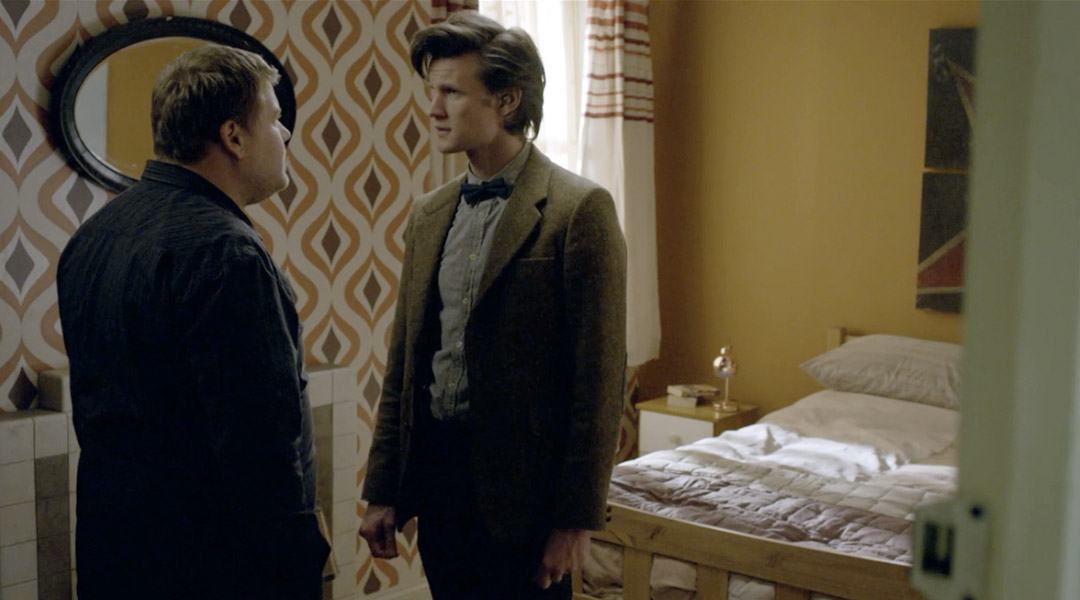 The Doctor: No, Amy. It’s definitely not the fifth moon of Cinda Calista. I think I can see a Ryman’s.

Sophie: Ugh. Now she’s having a Dylan crisis on top of the Claire crisis. It could be another all-nighter.

Craig getting up the nerve and opening the door: I love you.
The Doctor: Well that’s good, ’cause I’m your new lodger. D’you know, this is going to be easier than I expected.

Craig: But I only put the advert up today. I didn’t put my address.
The Doctor: Well aren’t you lucky I came along. More lucky than you know. Less of a young professional. More of an ancient amateur. But frankly I’m an absolute dream.
Craig: I don’t know if I want you to stay, I mean give me back those keys. You can’t have those.
The Doctor: Yes, quite right. Have some rent. That’s probably quite a lot isn’t it? Looks like a lot. Is it a lot? I can never tell.

The Doctor: Don’t spend it all on sweets unless you like sweets—I like sweets. Oh! That’s how they greet each other nowadays isn’t it? I’m the Doctor. Well, they call me the Doctor. I don’t know why. I call me the Doctor too. Still don’t know why.
Craig: Craig Owens. “The Doctor”?
The Doctor: Yep. Who lives upstairs?
Craig: Just some bloke.
The Doctor: What’s he look like?
Craig: Normal He’s very quiet. {something crashes upstairs} Usually. Sorry. Who are you again? Hello!

The Doctor: Ah. I suppose that. Dry rot?
Craig: Or damp or mildew.
The Doctor: Or none of the above.
Craig: I’ll get someone to fix it.
The Doctor: No, I’ll fix it. I’m good at fixing rot. Call me the “Rotmeister”. No, I’m the Doctor. Don’t call me the Rotmeister.

Craig: Here, this is Mark’s old room. He owns the place. Moved out about a month ago. This uncle he’d never even heard of died and left a load of money in the will.
The Doctor: How very convenient. This’ll do just right in fact. {more crashing upstairs}. No time to lose. I’ll take it. Ah! You want to see my credentials. {shows him the psychic paper} There. National Insurance number. {flips the psychic paper behind his back} NHS number. {and again} References.
Craig: Is that a reference from the Archbishop of Canterbury?
The Doctor: I’m his special favorite. Sh.

Craig: Why am I telling you this? I don’t even know you.
The Doctor: Well I’ve got one of those faces. People never stop blurting out their plans when I’m around.
Craig: Right. Where’s your stuff?
The Doctor: Don’t worry. It’ll materialize. If all goes to plan.

Amy to the TARDIS: Why can’t you land!?

Craig: That was incredible. That was absolutely brilliant. Where did you learn to cook?
The Doctor: Paris. In the eighteenth century. No, hang on. That’s not recent is it? Seventeenth? No no, twentieth. Sorry, I’m not used to doing them in the right order.
Craig: Has anyone ever told you that you’re a bit weird?
The Doctor: They never really stop. Ever been to Paris, Craig?
Craig: Nah. I can’t see the point of Paris. I’m not much of a traveler.
The Doctor: I can tell from your sofa.
Craig: My sofa?
The Doctor: You’re starting to look like it.

The Doctor: Those keys.
Craig: What?
The Doctor: You’re sort of… fondling them.
Craig: I’m holding them! Anyway. {grabs another set} These, these are your keys.
The Doctor: I can stay?
Craig: Yeah, you’re weird and you can cook. It’s good enough for me.

Craig: And listen, Mark and I, we had an arrangement. Where if you ever need me out of your hair just give me a shout. Okay? {he winks knowingly}
The Doctor winking back: … Why would I want that?
Craig: Well in case you want to bring someone ’round, or girlfriend or {looks at his outfit} boyfriend.
The Doctor: Oh I will. I’ll shout. Yes. Something like, “I was not expecting this!”. By the way, that—the rot—I’ve got the strangest feeling we shouldn’t touch it.

The Doctor: How’s the TARDIS coping?
Amy: Hm. See for yourself.
The Doctor: Oo, nasty. She’s locked in a materialization loop. Trying to land again but she can’t.
Amy: And whatever’s stopping her is upstairs in that flat. So. Go upstairs and sort it.

The Doctor: I don’t know what it is yet. Anything that could stop the TARDIS from landing is big. Scary big.
Amy: Wait. Are you scared?

Sophie: A bow tie? Are you serious?

The Doctor: Now all I’ve got to do is pass as an ordinary human being. Simple. What could possibly go wrong.
Amy: Have you seen you?
The Doctor: So you’re just going to be snide. No helpful hints.
Amy: Hm. Well, here’s one. “Bow tie: get rid”.
The Doctor: Bow ties are cool. Come on, Amy. I’m a normal bloke. Tell me what normal blokes do.
Amy: They… watch telly, they play football. They go down to the pub.
The Doctor: I could do those things. I don’t, but I could.

Craig: Doctor. How long are you going to be in there?
The Doctor: Oh, sorry! I like a good soap.

The Doctor: You’ve got two sets of keys to someone else’s house?
Sophie: Yeah.
The Doctor: I see. You must like it here too.

The Doctor: So I’m going out. If I hang about the house all the time the people upstairs might get suspicious. Notice me.
Amy: Football. Oh good, well done. That is normal.
The Doctor: Yeah. Football. All outdoorsy. Now. Football’s the one with the sticks, isn’t it?

Sean: So where are you strongest?
The Doctor: Arms.
Craig: No, he means what position on the field.
The Doctor: Not sure. The front? Side? Below.
Sean: You any good though?
The Doctor: Let’s find out.

The Doctor about a screwdriver: Where’s the on switch for this?

The Doctor: It’s too normal!
Amy: Only for you could too normal be a problem.

The Doctor: I told you not to touch it! “Look, what’s that? Oh, it’s an unfamiliar and pretty obviously poisonous substance. Oh I know what will be really clever. I’ll stick my hand in it.”

The Doctor: Hello Craig! How’re you feeling? Had some time to kill. I was curious. Never worked in an office. Never worked in anywhere.
Craig: You’re insane!
Boss: Leave off the Doctor— I love the Doctor. He was brilliant in the planning meeting.
Craig: You went to the planning meeting?
The Doctor: Yes. I was your representative. We don’t need Mr. Lange anymore. Rude Mr. Lange.

The Doctor: Hello Mr. Jorgensen. Can you hold? I have to eat a biscuit.

Craig: I can’t take this anymore. I want you to go. {hands him the cash} You can have this back in whole.
The Doctor: What have I done?
Craig: For a start, talking to a cat.
The Doctor: Lots of people talk to cats.
Craig: And everybody loves you and you’re better at football than me and my job. And now Sophie’s all “Oh! Monkeys! Monkeys!”. And then, there’s that!
The Doctor: It’s art. A statement on modern society.
“Oo! Ain’t modern society awful?”
Craig: Me and you, it’s not going to work out. You’ve only been here three days, they’ve been the weirdest three days of my life.
The Doctor: Your days would get a lot weirder if I go.
Craig: I thought it was good weird. It’s not. It’s bad weird. I can’t do this anymore!
The Doctor: Craig, I can’t leave this place. I’m like you. I can’t see the point of anywhere else. Madrid? Ha! What a dump! I have to stay.
Craig: No you don’t. You have to leave.
The Doctor: I can’t go.
Craig: Just get out!
The Doctor: Right. Only way I’m going to show you something but Shh! really shh! Oh! I’m going to regret this. Okay, right. First: general background. {he head butts him}.
Craig: You’re a—
The Doctor: Yes.
Craig: From—
The Doctor: Sh!
Craig: You’ve got a TAR—
The Doctor: Shh! Eleventh. Right, okay. Specific detail. {head butts him again}
Craig: You saw my ad in the papershop window.
The Doctor: Yes. With this right above it. Which is odd because Amy hasn’t written it yet. Time travel—it can happen.
Craig: That’s a scanner. You’ve used non-technological technology of [Lammasteen].
The Doctor: Shut up!!!

The Doctor: I’ve worked it out with psychic help from the cat.
Amy: Cat?
The Doctor: Yes. I know. He’s got a time engine in the flat upstairs. He’s using innocent people to try and launch it. Whenever he does, they get burnt up. Hence the stain on the ceiling.

Hologram (Ben Peyton): You will help me.
The Doctor: Right. Stop. Crashed ship. Let’s see. Hello! I’m Captain Troy Handsome of International Rescue. Please state the nature of your emergency.
Hologram: The ship has crashed. The crew are dead. A pilot is required.
The Doctor: And you’re the emergency crash program. A hologram. What, you’ve been luring people up here so you can try them out?

Sophie: Seriously, what is going on?
The Doctor: Oh, for goodness sake. The top floor of Craig’s building is in reality an alien spaceship intent on slaughtering the population of this planet. Any questions. No. Good.
Sophie: Yes, I have questions!
Hologram: The correct pilot has now been found.
The Doctor: Yes, I was a bit worried you were going to say that.
Amy: He means you Doctor, doesn’t he?

The Doctor: It doesn’t want everyone. Craig, it didn’t want you.
Craig: I spoke to him. He said I couldn’t help him.
The Doctor: It didn’t want Sophie before today but now it does. Why? What’s changed? No, I gave her the idea of leaving. It’s the machine that needs to leave. It wants people who want to escape. But you don’t want to leave, Craig. You’re Mr. Sofa Man. Craig, you can shut down the engine. Put your hand on the panel and concentrate on why you want to stay.
Sophie: Craig, no!
Craig: Will it work?
The Doctor: Yes!
Craig: Are you sure?
The Doctor: Yes!
Craig: Is that a lie?
The Doctor: Of course it’s a lie!
Craig: It’s good enough for me. Geronimo!

The Doctor: Craig! Craig! What’s keeping you here? Think about everything that makes you want to stay here! Why don’t you want to leave?
Craig: Sophie! I don’t want to leave Sophie! I can’t leave Sophie! I love Sophie!
Sophie: I love you too, Craig, you idiot.
Craig: Honestly, do you mean that?
Sophie: Of course I mean it. Do you mean it?
Craig: I’ve always meant it. Seriously, though, you mean it?
Sophie: Yes.
Craig: Then what about the monkeys?
The Doctor: Oh not now, not again, Craig. The planet’s about to burn. For gods sake kiss the girl!

Craig: Look at them! Didn’t they see that? The whole top floor just vanished.
The Doctor: Perception filter. There never was a top floor.