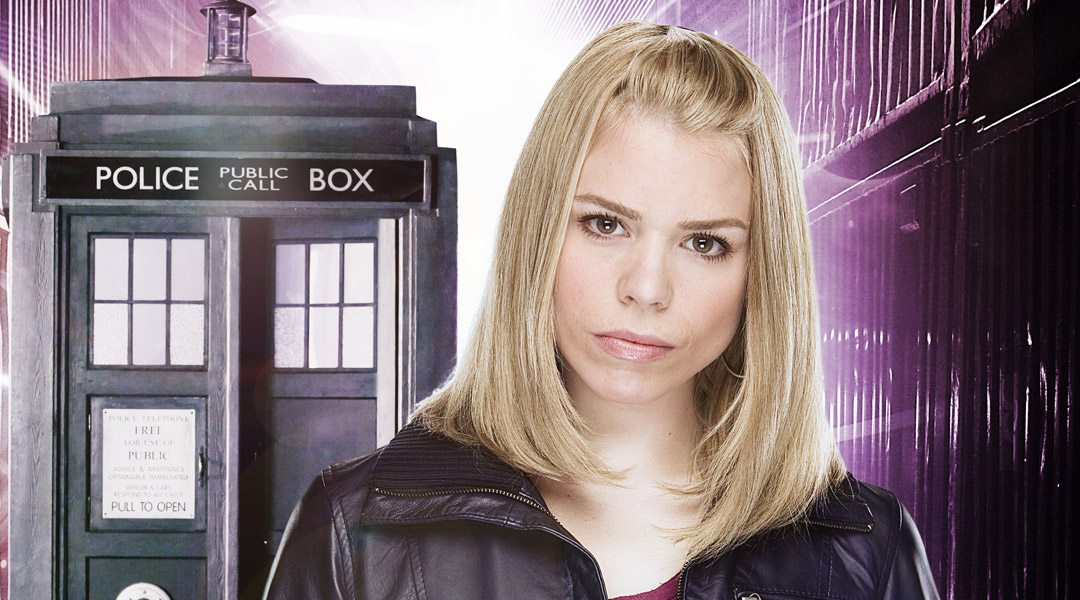 Rose: What happened? What did they find? {she grabs Donna} Sorry, did they find someone?
Donna: I don’t know. A bloke called The Doctor, or something.
Rose: Well where is he?
Donna: They took him away. He’s dead. I’m sorry, did you know him? I mean, they didn’t say his name. Could be any doctor.
Rose: I came so far.
Donna: It could be anyone.
Rose: What’s your name?
Donna: Donna. And you?
Rose: Oh I was just… passing by. I shouldn’t even be here. This is wrong. This is wrong… this is so wrong. Sorry, what was it? Donna what?
Donna: Why d’you keep looking at my back?
Rose: I’m not.
Donna: Yes you are. You keep looking behind me. You’re doing it now. What is it? What’s there! Did someone put something on my back?!

Rose: It’s the ATMOS devices. We’re lucky it’s not so bad here. Britain hasn’t got that much petrol. But all over Europe—China, South Africa—they’re getting choked by gas.
Donna: Can’t anyone stop it?
Rose: Yeah. They’re trying right now. This little band of fighters. On board the Sontaran ship. Any second now— a huge explosion in the sky—
Donna: And that was?—
Rose: That was the Torchwood team. Gwen Cooper. Ianto Jones. They gave their lives. And Captain Jack Harkness has transported to the Sontaran home world. There’s no one left.
Donna: You’re always wearing the same clothes. Why won’t you tell me your name?
Rose: None of this was meant to happen. There was a man—this wonderful man. And he stopped it. The Titanic, the Adipose, the ATMOS. He stopped them all from happening.
Donna: That Doctor.
Rose: You knew him.
Donna: Did I? When?
Rose: I think you dream about him sometimes. There’s a man in a suit. Tall, thin man. Great hair. Some… really great hair.
Donna: Who are you?
Rose: I was like you. I used to be you. ‘Cause you’ve travelled with him, Donna. You travelled with The Doctor in a different world.

Rose: Something’s coming, Donna. Something worse.
Donna: The whole world is stinking! How could anything be worse than this?
Rose: Trust me, we need the Doctor more than ever. I’ve— I’ve been pulled across from a different universe ’cause every single universe is in danger. It’s coming, Donna. It’s coming from across the stars and nothing can stop it.
Donna: What is?
Rose: The Darkness.
Donna: Well, what d’you keep telling me for? What am I supposed to do? I’m nothing special. I mean, I— I’m not… I’m nothing special. I’m a temp! I’m not even that. I’m nothing.
Rose: Donna Noble, you’re the most important woman in the whole of creation.
Donna: Oh, don’t. Just… don’t. I’m tired. I’m so tired.
Rose: I need you to come with me.
Donna: Yeah. Well. Blonde hair might work on the men, but you ain’t shifting me, Lady.
Rose: That’s more like it.
Donna: I’ve got plenty more.
Rose: And you’ll come with me. Only when you want to.
Donna: You’ll have a long wait, then.
Rose: Not really, just three weeks. Tell me, does your grandfather still own that telescope?
Donna: He never lets go of it.
Rose: Three weeks time. But you’ve got to be certain. ‘Cause when you come with me, Donna, I’m sorry, so sorry, but… you’re going to die.

Rose: “Time and Relative Dimension in Space”. This room used to shine with light. I think it’s dying. Still trying to help.
Donna: And it belonged to The Doctor?
Rose: He was a Time Lord. Last of his kind.
Donna: But if he was so special, what’s he doing with me?
Rose: He thought you were brilliant.
Donna: Don’t be stupid.
Rose: But you are. It just took the Doctor to show you that, simply by being with him. He did the same to me. To everyone he touches.
Donna: Were you and him… ?

Donna: What is it?
Rose: We don’t know.
Donna: Oh. Thanks.
Rose: It feeds off time. By changing time. By making someone’s life take another turn. Like, ah, meetings never made, children never born, a life never loved. But with you it’s…
Donna: But I never did anything important!
Rose: Yeah you did. One day that thing made you turn right instead of left.
Donna: When was that?
Rose: Oh you wouldn’t remember, it was the most ordinary day in the world. But by turning right you never met The Doctor and the whole world just changed around you.
Donna: Can you get rid of it?
Rose: I can’t even touch it. Seems to be in a state of flux.
Donna: What does that mean?
Rose: I don’t know. Sort of thing the Doctor would say.

Rose: I thought it was just The Doctor we needed, but it’s both of you. The Doctor and Donna Noble. Together. To stop the stars from going out.

Donna: How d’you know it’s gonna work?
Rose: Hm? Oh yeah. We don’t. We’re just, we’re just guessing.
Donna: Brilliant.
Rose: Just remember, when you get to the junction, change the car’s direction by one minute past ten.
Donna: How do I do that?
Rose: It’s up to you.
Donna: Well I just have to… run up to myself and… have a good argument.
Rose: I’d like to see that.
Captain Magambo: Activate Lodestone.
Rose: Good luck.
Donna: I’m ready!
Rose: One minute past ten.
Donna: ‘Cause I understand now. You said I was gonna die, but you mean this whole world, is gonna blink out of existence. But that’s not dying! ‘Cause a better world takes its place. The Doctor’s world! And I’m still alive! That’s right, isn’t it? I don’t die. If I change things, I don’t die. That’s… that’s right, isn’t it?
Rose: I’m sorry.
Donna: But I can’t die! I’ve got a future! With The Doctor! You told me!

Dalek: My vision is not impaired!
Sylvia: I warned you Dad.
Dalek: Hostility will not be tolerated! Exterminate! Exterminate! Rose takes off its head
Wilfred: Do you wanna swap?
Rose: You’re Donna Noble’s family, right? I’m Rose Tyler. And I need you.

Jack: What!? Who is that?
Harriet Jones: Harriet Jones, former Prime Minister.
Jack: Yeah. I know who you are.
Rose: Harriet! It’s me! It’s me! She can’t hear me. You got webcam?
Wilfred: No, she wouldn’t let me. She said they’re naughty.
Rose: Well I can’t speak to her then, can I?

Harriet Jones: Not now, Captain. And Martha Jones, former companion to The Doctor.
Rose: Oi, so was I!

Harriet Jones: I knew— I knew that one day the Earth would be in danger and The Doctor would fail to appear. I told him so myself and he didn’t listen.
Martha: But I’ve been trying to find him. The Doctor’s got my phone on the TARDIS but I can’t get through.
Rose: Nor me, and I was here first.

Rose: Find me, Doctor. Find me…

Rose: Right. I’m going to find him. Wish me luck.

Jack: Here we go! Good luck, Doctor.
Donna: Would somebody please tell me what is going on?
Rose: When he’s dying his body, it repairs itself. It changes. But you can’t!
The Doctor: I’m sorry. It’s too late. I’m regenerating.

The Doctor: You see? Used the regeneration energy to heal myself, but as soon as that was done I didn’t need to change. I didn’t want to. Why would I? Look at me! So to stop the energy from going all the way, I siphoned off the rest into a handy biometric receptacle. Namely, my hand. My hand there. My handy spare hand. Remember Christmas Day Sicorax. Lost my hand in a sword fight. That’s my hand. What do you think?
Rose: You’re still you.
The Doctor: I’m still me.

Jack: There’s a massive Dalek ship at the center of the planets. They’re calling it The Crucible. I guess that’s our destination.
Donna: You said these planets are like an engine. But what for?
The Doctor: Rose, you’ve been in a parallel world. You’ve seen the future. What was it?
Rose: It’s the Darkness.
Donna: The stars were going out.
Rose: One by one. They were just dying. Basically we’ve been building this, um, travel machine. This, uh, dimension cannon so I could, uh, so I—
The Doctor: What?
Rose: So I could come back. Shut up. Anyway suddenly it started to work. And the dimension started to collapse. And not just in our world, not just in yours, but the whole of reality. Even the void was dead. Something is destroying everything.
Donna: In that parallel world, you said something about me.
Rose: The dimension could measure timelines. And it’s weird, Donna, but they all seem to converge on you.
Donna: But why me? I mean, what have I ever done? I’m a temp from Chiswick.

Rose: What is that thing?
The Doctor: You’ve met before. The last of the Cult of Skaro.

Rose: So there’s three of you. Three Doctors.
Jack: I can’t even tell you what I’m thinking right now.

The Human/Doctor: But you made me.
The Doctor: Exactly. You were born in battle. Full of blood and anger and revenge. to Rose. Remind you of someone? That’s me, when we first met. And you made me better. Now you can do the same for him.
Rose: But he’s not you.
The Doctor: He needs you. That’s very me.

Rose: Alright both of you, answer me this. When I last stood on this beach—on the worst day of my life—what was the last thing you said to me? Go on, say it.
The Doctor: I said “Rose Tyler.”
Rose: Yeah and? How was that sentence gonna end?
The Doctor: Does it need saying?
Rose: And you, Doctor? What was the end of that sentence. he whispers in her ear and she turns to kiss him as The Doctor and Donna slip away into the TARDIS