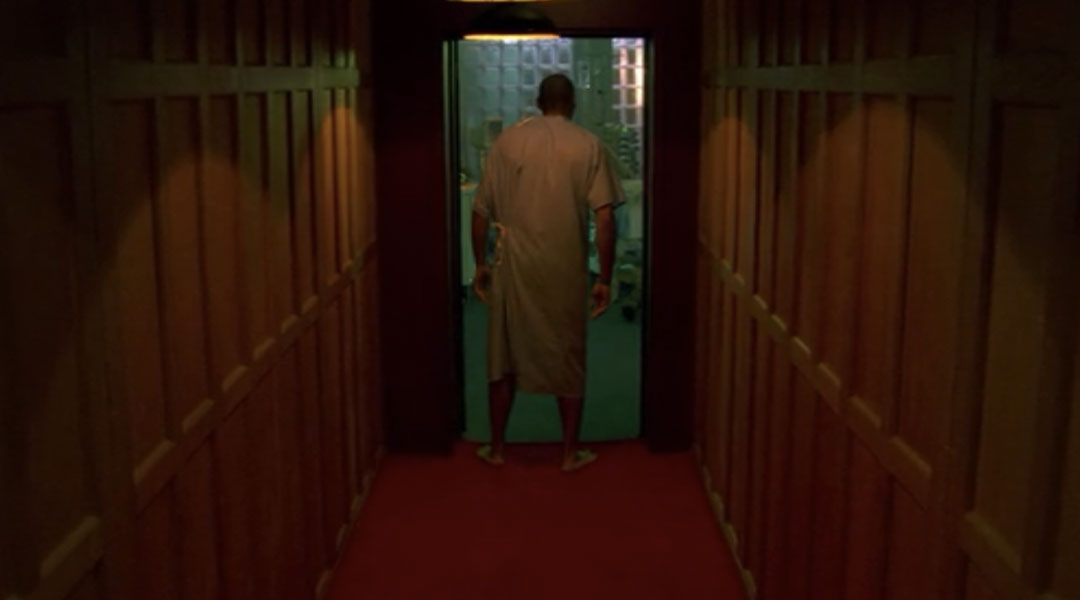 Mitchell: Why are you doing this?
Carl (Steve John Shepherd): Because it’s what you’d do for me, Mitchell.

George: I promised Annie I’d visit. I hope you don’t mind.
Hugh (Nathan Wright): Oh, not at all. Two customers, we’ll be talking about this for years.

Mitchell: I don’t know how to talk to you. I know I came on too strong the other day, but now— Oh my god, I’ve become my flatmate.

Nina: What an interesting selection of food.
George: Well I shall explain. You’ve just done the night shift so for you it’s breakfast time, but it’s two in the afternoon so technically it’s lunch. The feast before you now has been specifically designed to combine the best bits of those two meals. Eggs benedict, choc ice, can of ginger beer… cigarette.
Nina: Breakfast of Champions.
George: Which isn’t to say I approve of your smoking, I’ve just given up the fight on that one.
Nina: Besides you’ve done more to shorten my life expectancy than these ever could.

Sir Terry Wogan: Look lively, we haven’t got much time. I need to talk to you about Annie. The lovely girl at the pub.
Saul (Alex Lanipekun): Annie?
Terry Wogan: She’s a cracker, isn’t she? I think you and she would make a smashing couple. I want to help.
Saul: No, this is one of those hidden camera things, right? Duncan, you absolute bastard!
Terry Wogan: No, this is about the corridor, Saul. Perhaps you should sit down. Until you had your accident, I can’t say I paid you much attention. But the minute you walked into that pub, saw that lovely girl, I knew I had to lend a hand.

Mitchell: George around?
Nina: Upstairs. Probably making me a mix tape.
Mitchell: I cam imagine how hard this must be. But the stuff we can teach you, me and George.
Nina: Like sit… and fetch? Thank you, but I’m fine. Really.

Mitchell: One of the times I properly tried to stop drinking blood, I was living with this vampire Carl, and he helped me. He’s been clean for, I don’t know, like twenty years.
George: You… um, sorry. You lived with someone before me?
Mitchell: What? Yeah, lots of people.
George: Wha- ? Like who?
Mitchell: Vampires. People people. I don’t know.
George: People people. Oh, I see.
Mitchell: Oh god. You… don’t get all you about it. Of course I’ve lived with other people. Do you think I’ve spent the last hundred years waiting for you and your three different types of upholstery cleaner to show up?

Saul: I was technically dead for about six minutes.
Annie: You poor thing. That’s, um, awful.
Saul: That’s not the, ah…. The thing that makes it still present in my mind, is what I saw.
Annie: Well, what did you see?
Saul: It’s stupid.
Annie: No, no please.
Saul: There was a corridor. Bright white.
Annie: Like in the films.
Saul: Except it wasn’t, because it was frightening. Like when you dream and you have this terror.
Annie: Were you alone?
Saul: No, there were men there. Men with sticks and ropes.
Annie: I’ve seen it.
Saul: What?
Annie: A few years ago I was attacked. It left me… But I saw it, I saw that exact same thing.

Mitchell: What happened, Carl?
Carl (Steve John Shepherd): I’d been dreaming about blood and that frightened me. When it happened… he didn’t even look frightened. He looked disappointed. You think you’re free of it but it finds you. All those years without it. It’s like a bill that has to be paid.

Carl: You’re a celebrity, you know.
George: So people keep telling me.

George: You are being careful, aren’t you?
Annie: Thanks. But I think I’m a bit old and dead for contraception conversation.

George: I don’t want you to get hurt.
Annie: No, neither do I. But that risk it’s… it’s all part of the deal.

Annie: Are you sure about Hugh?
George: I know that look. I’ve given people that look. Usually while they’re giving that look to someone taller.

Carl: Did Mitchell tell you why I’m here?
Nina: He told me enough.
Carl: You’re not in any danger. I want you to know that.
Nina: You killed someone. Sounds pretty dangerous to me.
Carl: You don’t understand.
Nina: Oh, you got that right.

Nina: We shouldn’t be in houses. In streets where there’s children.
Carl: There are safeguards you can put in place.
Nina: Things go wrong. Christ knows, we’re both proof of that. I’m radioactive now, that’s how it feels.
Carl: Trust me, he knows what he’s done.
Nina: Is that my shepherds pie?
Carl: Mm. Quite possibly.
Nina: George made it.
Carl: It’s good.
Nina: Hm. He’s a good cook.

Lucy: So, Gay Vampire Man.
Mitchell: Are you actually calling him that?
Lucy: It’s shorthand. We use it all the time. Like Creepy Self-Harm Girl, or Accidentally Sat on a Wine Bottle Man, so… Gay Vampire Man.

Mitchell: I thought we were clear, the pathologist does what he can but if it gets bumped up, you kill it.
Coroner Quinn (John Stahl): It doesn’t get bumped up. Herrick keeps things away from my desk.
Mitchell: Herrick’s gone. I’m handling this.
Coroner Quinn: What happened to him?
Mitchell: Politics.

Ivan (Paul Rhys): Some say you drugged him first. Others say you begged for a place in the New World and when Herrick refused you killed him. I’ve even heard that he escaped and he’s building an army in Europe. What really happened? I’m curious.
George: He came in, I changed. I tore his head off.

Ivan: Look, I know you screwed Daisy. What did you tell her? What did you say that made her feel again?
George: It was complicated. Um, she was going to kill her daughter. And I convinced her not to.
Ivan: Hm. I wanted it to be something I could understand.

Mitchell: You did what?
Annie: Sort of… disappeared.
Mitchell: Right. But that’s okay, because by disappeared you mean “got away.”
Annie deftly changing the subject: Oh Mitchell, have you been working out?
Mitchell: Oh, that’s just fantastic!
Annie: He was all over me! It was a reflex.

Mitchell: Carl!
George: He’s not here.
Mitchell: What? Where is he?
George: I don’t know. He’s your murdering fugitive. If you want to keep him you’ll have to look after him.

Newsreader (Jonathan Aris): Okay, here’s the thing. Annie’s dead.
Saul: What?
Newsreader: Well, it’s complicated. She’s in limbo. She should be here with us, but she’s turned death down and it’s pissed off some very important people. And they want her back.

Annie: Would you like a cup of tea?
Hugh: Oh, please.
Annie: Take your pick.
Hugh: You expecting people or… ?
Annie: Oh! No, I just like to make tea.

Hugh: All my life I’ve been the consolation prize. I can’t do that anymore. You’re so beautiful. I’d move mountains, I’d kill bears. But I need you to want to kiss me.
Annie: So what do we do?
Hugh: I’ll wait.

Ivan: Today it’s Carl, tomorrow it’s someone else. It’s like I said, you’re sliding into chaos and there’s no safety net now. They’ve been in hiding since Herrick died but they’re gonna get hungry soon and you’re going to be waking up to headlines about vampires.
Mitchell: I’ve been thinking. If we did declare ourselves—not the way Herrick wanted. But if we could just stop hiding.
Ivan: What, are you imagining some kind of peaceful coexistence? It would be chaos! Worldwide panic. Good news for religion, mind you. Especially Christianity. It’d be standing room only in the churches all of a sudden. And as soon as they knew about vampires they’d know about werewolves, they’d know about ghosts. They’d be next. And when humanity had finally finished with us it would turn in on itself. First the other religions—massively in the minority now. Then the homosexuals, the disabled. Do you want to know what the future looks like? Enforced worship in churches a mile high. And every country surrounded by a coral reef of bones. {pause} But fuck it, maybe it should happen. There’s nothing on TV at the moment.

Ivan: Okay, two rules for Ivan’s car. No food or drink and I get to choose the music. And tonight, we shall be listening to Miss Kate Bush.

Nina: You let him out. The dead man. From the morgue.
George: We put him on a container ship to Brazil.
Nina: Of course you have, anything else would be insane.

Radio Voice: We’ve got you trapped like a fly under a glass. Buzz buzz buzz! Now Saul! Get her through the Door!

Radio Voice: We needed you here, we needed the Door. So we scraped you up and brought you back. Come along, Saul, tip her into our arms. We’ve all manner of tricks and weezes waiting for her. That’s the ticket! We’ll let you live, Saul. You’ll spring back to life, fresh and crisp as a daisy.
Annie: No! It’s not my Door!

Mitchell: Nina. Don’t do this. I understand, I really do. But it’s gonna take time to adjust.
Nina: Adjust? You’ve gone native. The three of you. Maybe I’m being naive. Maybe it’s the consequence of your condition. Our condition. I don’t know. Your humanity, this thing… are you protecting it? Are you looking for it? Do you even know? Because take it from me, it’s long gone.

Mitchell: What have you said to George?
Nina: I’ve written him a letter.
Mitchell: Jesus, Nina. A letter?
Nina: He gets a letter. I love him. I really do. I mean sickening, stomach-turning love. Practicing my signature with his second name kind of love. But I look at him, and I want to pull chunks of flesh from his face.

Annie: Hugh? Hugh, can you see me? Can you hear me, Hugh? Oh god. Not again. Please. Not this again.