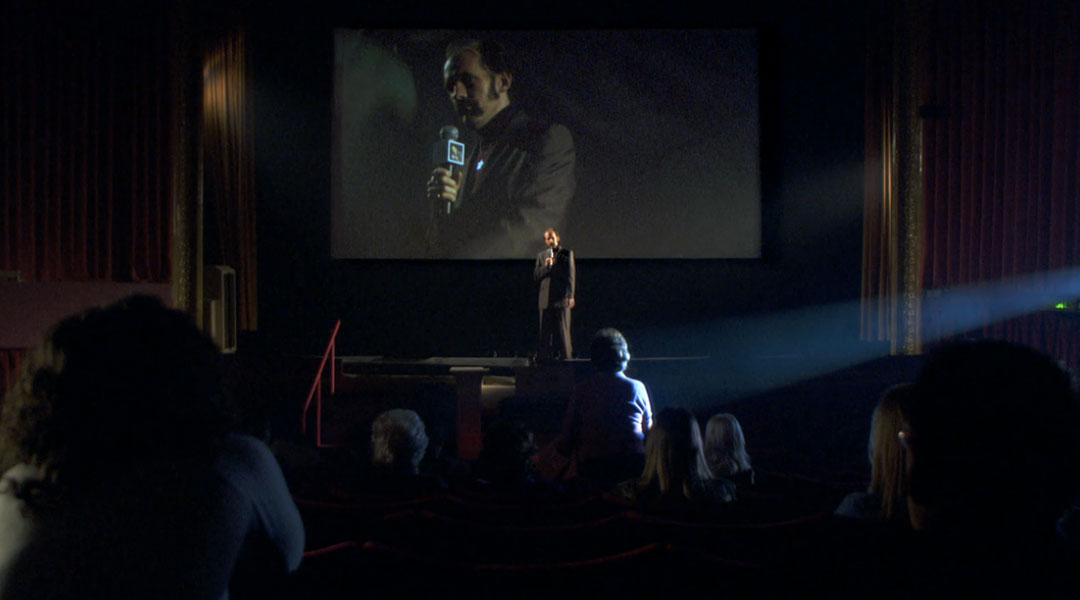 George: So what are you, just flinging pottery around like a common poltergeist?
Annie: Did you just call me a poltergeist! Mitchell— Mitchell, listen to this. This is classic, this is. Go on. Say it to Mitchell, go on. Say it again, go on.
George: Would you just shut up for a millisecond? Mitchell, Sam and I are viewing a house today.
Annie: Ha! What d’you make of that?
Mitchell: He has to view houses. He’s moving out.
Annie: Right. Take his side. You two are just so… gay for each other.

George: Annie, I don’t understand. I thought you were fine with this. Come here, you big silly bear.
Annie: I was fine with “this”. When I thought “this” was a notion. But now you’re out viewing actual proper non-imaginary houses.
George: You thought it was a notion?
Annie: Yes! George, I didn’t think you would seriously go through with it. I thought the moment would just pass. You know, like when you decided you were going to wear skinny jeans.
Mitchell: Skinny jeans?
George: That was a private conversation.
Mitchell: Seriously?
George: It was a moment of madness.

Mitchell: I don’t want him to go either.
Annie: Well then don’t let him.
Mitchell: We can’t keep him prisoner.
Annie: We do have a cage.

Sam (Lucy Gaskell): It’s available now!
George: What? Now? No, no. As in, today now? As in right here, right now?
Sam: Someone else will have moved in by the time you’ve finished that sentence. What’s the problem?
George: Don’t you think it’s a little far out?
Sam: It’s like half an hour from town.
George: Tell you what, I would really rather be a little closer to my friends.
Sam: By friends, you mean Mitchell.

Lucy (Lyndsey Marshal): I’m sorry. I wasn’t strong enough. I thought I was, I thought I could do it but I can’t. I can’t kill another person.
Kemp (Donald Sumpter): He’s not a person, Professor. They’re not people.
Lucy: I know. I know, and I keep telling myself that. I’m so frightened.
Kemp: Of what? Of them? Of him?
Lucy: Of myself.

Annie: You’re a ghost?
Robin (Aimeé-Ffion Edwards): Of course I’m a ghost. Who’d you think I was?
Annie: An usher?

Robin: Here we are. The cheap seats.
Annie: Do they live here?
Robin: No. But when a psychic rolls into town we get a good few ghosts back here.
Annie: You throw the term “psychic” around pretty loosely.
Robin: No, Alan was amazing. He really was. Then one year he started ignoring us. Stopped engaging. I don’t know why.

George: It’s just I have this thing. It’s planned. It’s a planned thing.
Sam: What is?
George: Um, it’s a work thing. It’s about every month or so. In Liverpool. Training.
Sam: Training? You’re a hospital porter, George.
George: Sport training.
Sam: Sport? You?
George: Yes me. Sports. What’s so? I’m on a sports team. It’s toboggan.
Sam: Did you just say toboggan?
George: Yep. Yes I did.
Sam: Right. So you and Mitchell, you toboggan. In Liverpool.
George: Yep. We are tobogganists.

Annie: What are you looking for?
George: The bloody phone charger.
Annie: Oh, that’s in the oven.
George: Really? Alright. Cheers…. What?
Annie: When you said you were viewing houses I started to hide your stuff.
George: Why?
Annie: I thought the more of your stuff I hid then the longer it would take you to leave.
George: Right. How much stuff are we talking about, Annie?

Annie: George. Sorry about earlier. It’s just, I like it. The three of us. It’s us against the world.
George: But I don’t want to be against the world anymore! It gets so tiring, I want to be part of it. We’re all so scared of what might happen out there, and huddled together in this little house somehow makes us less afraid. But you know what? I am ready to be scared. I can’t let this thing own me anymore. {he leaves}.
Annie: You might have a point, George.

Annie: Red Robin, this is A1. Let me know when we have FO hedge clearance. Over.
Robin: Should be about twenty minutes.
Annie: Do it properly. Over.
Robin: This is Red Robin. We’ll have front-of-house clearance in twenty minutes approximately. Over.
Annie: I don’t think your heart’s really in this, Red Robin. Over.
Robin: Maybe because it’s stupid. Over.
Annie: How’s it stupid? Over.
Robin: Because I’m stood right next to ya. Besides it don’t even work. They’re not connected to anything.
Annie: Well you are just determined to pick holes in this operation, aren’t you?

Annie: Alan, Jimmy has a pretty serious message for her. Um, apparently she’s getting married again.
Alan (Simon Paisley Day): Jimmy says you’re getting married again, Orla.
Orla (Sally Ann Matthews): Yeah. Well that’s why I’m here, really, ’cause I just wanted to check, you know, that he was all right with it.
Jimmy: I’m not.
Annie: Oh, he says he’s not.
Alan: Yeah, he wants you to know that he’s not.
Orla: He’s what?
Alan: He’s not okay with it.
Orla: And why the fuck would that be?
Annie: Because apparently her new boyfriend is a massive tosser. {Jimmy whispers again} And a sponger.
Alan: Because your new man is a massive tosser and a sponger. Allegedly.

Mitchell: Look you just spread the word, okay? I want everyone there.
Ivan (Paul Rhys): Just, just leave it to me. I’ve got most of them on my Twitter feed, so it’ll be all right, okay?

Alan: Don’t tell me. Your daughter’s name is…
Annie: It’s me. She’s here for me. That’s my mum.
Alan: Your daughter’s name was Annie. Is there something you’d like to ask Annie?
Carmen (Jacquetta May): I just… well, I don’t even know what I want to hear. I don’t know what would help. I mean, losing a child is, um, it’s a unique kind of pain. The pain is… spectacular. You know what? If you told me that you could take that pain away, I’m not sure I’d want you to because it’s, it’s all I’ve got left. I want to feel that pain. And I deserve to feel that pain, because… I should have known. She was my little girl, and I should have known that she was in danger. I should have known that she was scared. Because I’m her mum and I really should have known. {she sits down.}

Molly (Molly Jones): Don’t hurt her. Or if you have to hurt her, do it once. Do it now. Leave.

Carmen: I was so afraid of this place. I just thought that if I came here that this would become my last memory of you. That somehow, your face and your eyes and your laugh… would be replaced by this. But I still have you. I mean I do still have you, don’t I?
Annie: You will always have me, mum.
Carmen: So I’m going to try. I’m really going to try.

Annie: I can’t come on the road with you, Alan.
Alan: I know.
Annie: Speaking to my mum and telling her that she had to move on, it just made me realize what a hypocrite I was being. To come away with you then I’d… I’d just be running away.
Alan: It won’t be the same without you.

Ivan: Only alcohol tonight, I’m afraid. None of the hard stuff.

Ivan: Look, this was your plan and, you know, it’s working. Everyone’s on the wagon—
Mitchell: Yeah.
Ivan: Well aside from me, obviously. But I’m, you know, a Special Needs.

Ivan: Mitchell, at the moment I’m keeping my excesses in check as a favor to you and because it amuses me. But, um, you have no idea of the effort that that entails. Now I can’t lead, not even by example. I am just one step away from wiping out an entire branch of Argos.
Mitchell: Then this will be ideal. It’ll give you something to focus on. You know, this is the problem with vampires. Too much fucking introspection! Jesus.

Mitchell: Ivan, I’ve met someone. I can’t be with her and be part of this. I know it’s a big ask. I know it’s a huge favor, but I can’t… She’s my way out of this chaos. This could be my last chance and if I get… Oh, forget it! It doesn’t matter.
Ivan: You should have said it was about love. I get it now. We all lead long and appalling lives. But I have my Daisy. Everyone deserves a Daisy.

Lucy: I just think we need to wait a few more minutes.
Kemp: I’ve waited long enough. This is the will of the Lord. I’m prepared to carry it out. Are you? {she nods} Professor. You need to say the words.
Lucy: Do it.

Mitchell: This has been a really, a really interesting journey. But tonight marks the end of the journey for me. But I’ll be leaving you in the capable hands of—
Ivan throwing Mitchell to the floor: Get down!

Kemp: And the deed is done. Shall we pray?