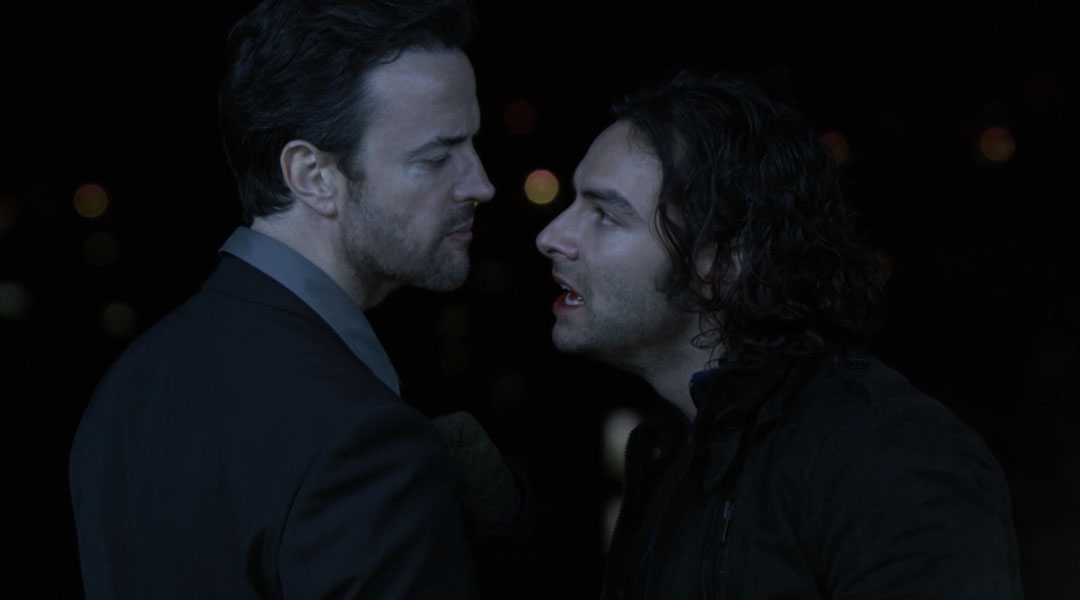 George: I was actually looking forward to this, living with Nina. But I’m not sure even… I mean yeah, yeah, there’s moisturizer and there’s Tampax in the bathroom but it’s not like we’re having sex. We watch TV and she’s just sitting on the other— I mean if she could see the screen from the patio she’d sit there.
Mitchell: She saw you kill someone. That’s aside from all the stuff about us.

Nina: George’s thing… the thing that happens to him. Does he ever talk about it? Like, do you know how he caught it?
Annie: Yeah. He was on a holiday and he went out walking and he was attacked. He actually met the guy. Well, the wolf.
Nina: Small world.
Annie: Certainly seems to be for us.

Nina: I need to show you something. {she rolls up her sleeve.} When he pushed me back I got these.
Annie: But he hadn’t changed though, had he.
Nina: Well… his nails needed clipping.

Annie: Nina, if there’s one thing that I’ve learned about this world is that it doesn’t follow logic. We’re talking about magic and curses. We’re off the map here.

Mitchell: George why are we doing this?
George: Three times. Three times I’ve been attacked now.
Mitchell: We should let them go. {George starts upstairs.} Be careful.
George: I think I can handle her.
Mitchell: I know her. Be careful.

Daisy: A lot of vampires, it’s all about the blood and the world domination. Me and Ivan… we’re just about the tourism.

Ivan: Oh, mate, you look awful.
Mitchell: You just smacked me in the face!
Ivan: Oh, I think you know what I mean. So it’s true then? You’re clean.
Mitchell: Yes. You should try it.
Ivan: Oh, yes, and maybe one day I could look like shit too.

Mitchell: Why did you attack George?
Ivan: It was my duty.
Mitchell: Your duty. You didn’t even like Herrick.
Ivan: There are rules, Mitchell. He was one of us.

Ivan: Bet I’m not the first. I won’t be the last either, no. Insurgents. Herrick loyalists. Just anybody wanting to make a name for themselves. His dance card’s going to be pretty full.

Annie: What are you gonna do?
Nina: The first time he said he went to the woods, so he wouldn’t hurt anyone. Or there’s that room where it happened. George said he wouldn’t use it again. I could go there.
Annie: I mean about telling him.
Nina: Oh, I don’t know. I guess. Will you come with me? It’s the full moon tomorrow and I don’t want to go on my own.
Annie: Of course, yeah. Of course I will.

Ivan: Brush up on your history. Taking out someone like Herrick is never clean, it’s never clinical. It leaves a wound and wounds get infected.

Mitchell: Let me make this clear, an attack on him is an attack on me. You meet anyone, you tell them that. And tell them to hide. We go back to the shadows where we were. The revolution has been cancelled.

Ivan: You’re sliding into chaos here. Should be an interesting show.

Daisy: I’m hungry, baby. We should grab someone on the way home.

Mitchell: What happened?
George: She attacked me… but I managed to fight her off.
Mitchell: Yeah? You’ve got lipstick on your mouth.

Mitchell: You can’t get a job, Annie.
Annie: But who would know? I’m visible now, I’m solid.
Mitchell: You’re not solid, you’re squishy. What about when people touch you?
Annie: What kind of a pub do you think it is, Mitchell?

George: I think it’s a good thing she’s moving on.
Mitchell: No, you’re right. The disembodied spirit of a dead woman is getting a job in the service industry. What could possibly go wrong?

Lucy (Lyndsey Marshal): Last night I got home and my goldfish was gone. No body, no note, nothing. So… no, I’m really not okay.
Mitchell: Do you have a cat? ‘Cause, well, chances are that’s what ate the goldfish.
Lucy: I don’t, but if I did I think I would have made that connection.

George: I’m not saying you should find this easy but do me a favor, Nina, and take your disdain somewhere else. Because to get that every day, to see that from someone I love, is just another punishment.

Nina: You gave it to me, George!
George: What?
Nina: In that room. You pushed me away, and you scratched me. You gave me the curse.
George: Then last night…
Nina: Was very busy. I’m a werewolf. I’m a fucking werewolf.

Daisy: Where are you going? I could tear her throat out!
George: Go for it, but don’t imagine it’ll make her go away.

Annie: Why don’t you use the one at my house. I’m only up the road.
Hugh (Nathan Wright): I don’t think that’s such a good idea, Annie.
Saul (Alex Lanipekun): Yeah he’s right, I might murder you.
Annie: Oh, plenty have tried.

Hugh after Annie and Saul leave together: Well. We all saw that coming.

Nina: Why does this always happen when you tell a man another man is handsome?
Annie: Yea, it is possible for two men to be handsome. {sees George} Three men.
Nina: Although he is really handsome.
George: Look, can we talk about something else?
Nina: I’m a werewolf.
George: I guess he’s fairly handsome.
Annie: Yes, well let’s hope he’s deaf as well.