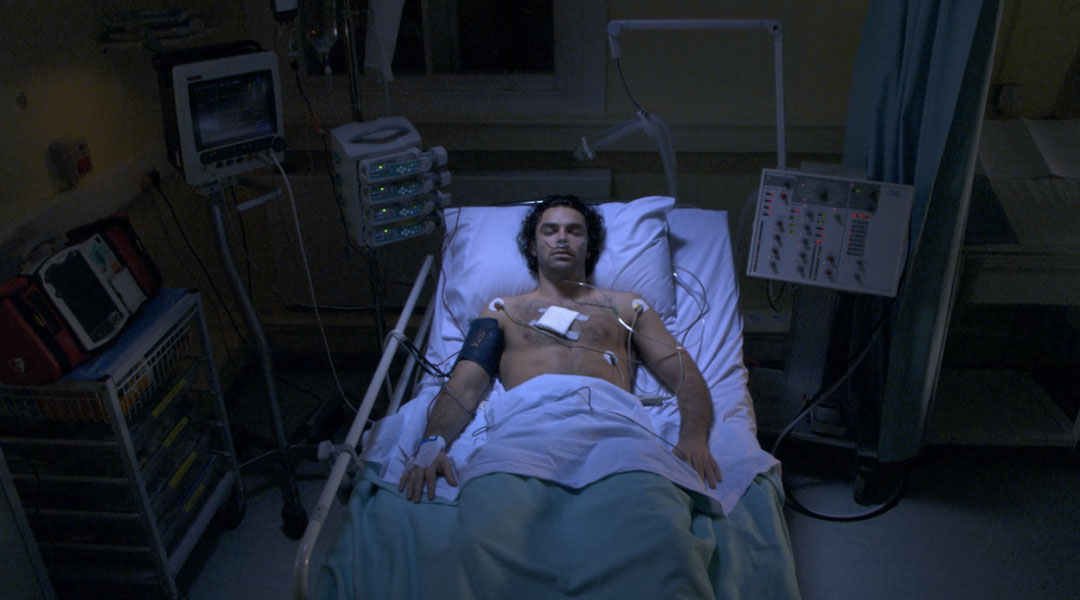 Annie: It was nothing really. Just a small good deed in the darkness. But fate is always playing a long game.

Seth (Dylan Brown): They don’t know who we are.
Thug: They do. I got here before you arrived and got talking to the owner. His nan’s died, and he wanted an undertakers so I kinda gave him our business card.
Seth: We’ve got business cards? We’re not even a real business!

Mitchell: Look, I’ve got no love for lycos, but that’s a big trail you’re leaving there.

Annie: They were just two souls, united by fear and solitude. Lost in the dark. Fate pushed them together. And now they were going to find out why.

Nina: There’s always something weird around you two. Mitchell—his condition, his body. It’s not right.
George: It’s a family thing.
Nina: “Family thing.” Jesus, what does that mean, George? It’s just riddles. Are you involved in this family thing?
George: I guess. By association.
Nina: Which means I’m involved by association. I don’t like that. {her pager goes off.} I can’t do this anymore.

George: We need to get him out of here. He’s raising too many questions. He’s too impossible.
Annie: Well we can’t move him while he’s like this. Why isn’t he getting better?

George: Why didn’t you go through the portal?
Annie: How could I? With him like this.
George: I told you I could manage.
Annie: What, you want me to go?
George: Of course not! But if I had the chance to be free from all—
Annie: Look. Why don’t you go. Get some rest.
George: No, I’m too wired.
Annie: Okay, well, we’ll do it in shifts.
George: What will you do about the portal?
Annie: I’m not going anywhere until Mitchell gets better.

Annie: Guess I’ve missed my flight. So. What do I do now? Apart from stand here and talk to myself like a mental.

George: What are you going to do?
Mark the Hospital Chaplain (Michael Begley): I was going to say a prayer for him. Perhaps you’d like to join me.
George: No. That’s not such a good idea.
Chaplain: If you’re non-believers that’s fine. We can just sit together for a few moments of contemplation.
George: Contemplation about what?
Chaplain: Fiery oblivion that awaits all atheists.

George: I’m Jewish. And… he’s complicated.
Chaplain: Jewish people pray. I’ve seen Yentl.
George: You’re very sarcastic for a vicar.
Chaplain: Yeah so people tell me, and I feel really bad about it but then, you know, I forgive myself.

Mitchell: They’re coming.
George: No, it’s okay. You’re safe now. We got you away, Mitchell. It’s fine.
Mitchell: No, they’re coming here. They’re in the hospital.

Josie (Clare Higgins): George told me what happened. I don’t understand. I thought you were Vampire Employee of the Month.

Josie: If you don’t stop Herrick, who will?
Mitchell: You saved me once already. So let me save you too.
Josie: Death isn’t always the unwelcome guest you think it is.

Josie: I was thinking about that first time I saw you. My god, my knees were like spaghetti.
Mitchell: You sat there with your cigarette trying to look all sophisticated.
Josie: I spent ten minutes lighting the wrong end. You made me so nervous.

Herrick: How do you think this ends?
George: I don’t know. We kiss?

Herrick: This is nature. Darwinism, George. And nothing can stop it. Not Mitchell, not your friend Casper… and certainly not you. I will chase you all to the edge of the world and pick the meat off your bones myself.

Annie: Herrick can’t hurt me though, can he? I know that sounds… But I’m saying that’s all talk. He can’t hurt me. I’m already dead.
Mitchell: He can. It’s the house that keeps you here. It’s me and George. So he’ll get rid of us, burn the house to the ground. There’ll be nothing left for you. You’ll be like smoke, you’ll just blow apart in the breeze.

Nina: I need something normal now. Something kind.
George: You need me to choose between you and him.
Nina: I didn’t say that. Please don’t pin that on me. Look, I want to be happy. I want you. That’s not unreasonable. But my world and the world of you and all those secrets, I don’t know. Do you think they can exist together?

Mitchell: There are conditions.
Herrick (Jason Watkins): Here we go.
Mitchell: You let George and Annie go.
Herrick: My god, what is this hold they have over you?
Mitchell: You wouldn’t understand. In fact you could say that’s what this whole thing comes down to.

Herrick: … And I was going to give you South America.

Mitchell: We need to finish this now. Otherwise they’ll hunt us down. They’ll pick us off one by one.
Annie: So we bring the fight to them. I mean look at us in the funeral parlor. We kicked undead ass!
Mitchell: Do you have any idea how many vampires there are out there? Just trust me on this. If I beat him—if this works—then the whole thing falls apart.

Annie: Do you want to be punished? Is that what this is? Some kind of martyr thing?
Mitchell: ‘Cause then he’ll let you go.

Mitchell: Annie, I’m meeting Herrick. I’m ending this.
Annie: And it is precisely because of that attitude that you do not have a say in this, isn’t that right, George? {silence.} Talk to me, fella.
George: Mitchell’s made his decision. I think we should respect that. I have to think about my future. I have to think about Nina now.

Mitchell: It’s not like I was drunk and there were whole periods I can’t remember. I can tell you all their names. What they were wearing. I remember who cried… who fought back.

Mitchell: Others have tried to quit before me, but they didn’t last long. I just thought the need for blood got too much, but it was this. Because when the craving subsides it all comes back. Everything you did. It’s just you in that room with that person and it’s just so much easier to go back. And drink again. Lose yourself again so you don’t have to face it. Believe me, George is no more of a coward than I am.

George: I don’t know how things have got this far, but this is our last chance. Please. He’s one man. Why is he so important?
Herrick: Mitchell is a profoundly dangerous man. More so than he realizes.

George: You remember when we met? I was being attacked but you saved me and you told me I had to get away and then I said, “And then what?” I have this thing hanging about me that I can’t leave behind, so my life will always be “And then what?”
Mitchell: But there was this.
George: What?
Mitchell: You thought there’d be nothing but there was this. There was the house, you and me. There was Annie.
George: It wasn’t human though, was it?
Mitchell: No, George. It was never going to be that.

Cara (Rebecca Cooper): Herrick came for me. And now I have the blood of the ancestors. Ten thousand years of majesty and glory!
Annie: Well. Congratulations on mastering the whole speaking like a twat thing.

George: You shouldn’t have gone for Mitchell. It got my attention.

Herrick: But ah, I don’t know what you’re hoping to achieve, hm? I can’t be killed. This whole thing, you can’t hurt me.
George: We both know that’s not true. Because we’re not talking about bullets or knives here, are we? I am the weapon.

Herrick: So. A werewolf, a ghost and a vampire decide to live like humans do. They get a job, a house and a TV license. They take friends they will lie to. Take lovers they will infect. In fact, the only part of humanity they successfully adopt is its ability to deceive and destroy. All in all I’d say your little scheme has been something of a failure.

Herrick: I realize now that was my role. If I’m going to hell then I’m taking you with me.
George: Haven’t you worked it out yet? Humanity is about love and sacrifice. This doesn’t rob me of my humanity. It proves it.

Nina: You tried to protect me from it all, didn’t you?
George: I thought maybe the two things could exist side by side. Something I hated and something…
Nina: Say it.
George: Something I loved.

Annie: Why did I hear those voices? The dead people? I never used to be able to do that.
Mitchell: You turned down death. No one’s ever done that. It’s like it opened something in you.
Annie: Like I’ve got a whole new skill set.
Mitchell: We should make an action figure of you.

Annie: So what happens next, Mitchell?
George: Yeah, is it over? Are we safe now?
Mitchell: Maybe Herrick is right. Maybe someone will pick up where he left off. Or maybe that’s it. Maybe nothing happens now. None of us know what safety is like. What if this is it?