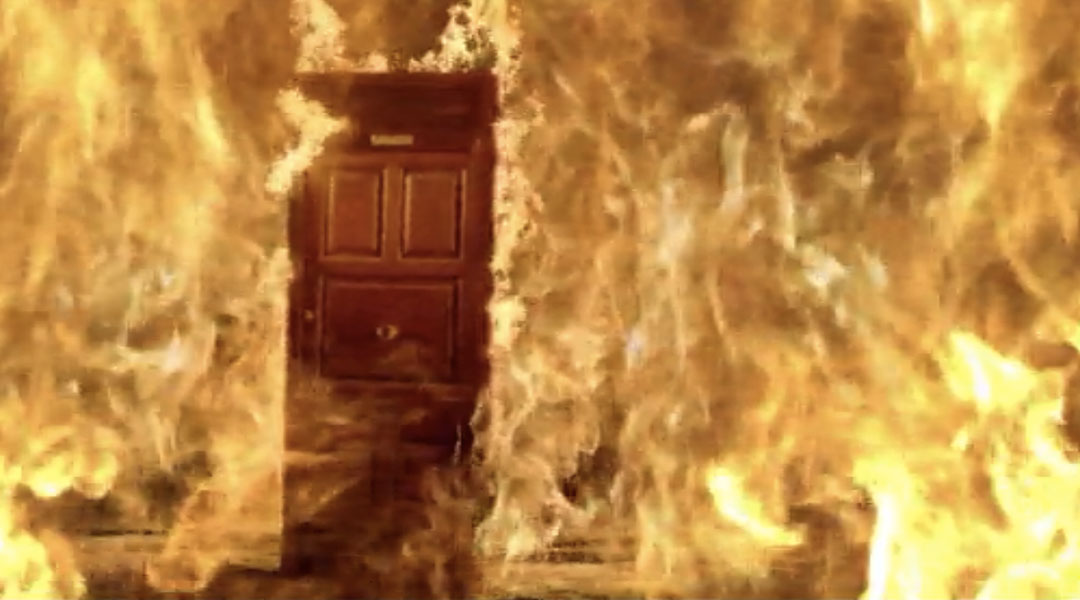 Snow (Mark Gatiss): Do you know who I am? I was in the area, as they say. What about you, Isaac Daniels? Why are you in the areas?
Daniels (Matthew Ashforde): We were on the way back from seeing my father. He’s in one of the resettlement camps in London West.
Snow: Do you know what tomorrow is?
Daniels: Of course, sir. Eleventh of April. Ten years ago tomorrow you killed the Prime Minister live on television.
Snow: He was appealing for calm. He looked so pale. His tie was askew.

Snow: One last question. Your daughter. What color are her eyes? Come Mr. Daniels, it’s hardly a complex problem. You don’t remember, do you? I dare say, when the other agent handed her over with her fake papers, you looked her up and down and thought, “Is this what all the fuss is about? This is the War Child?” But the one thing you didn’t take in was the color of her eyes.

Daniels: You won’t win, you know.
Snow: I think we already have.

Alex (Kate Bracken): Why am I still here? Does everyone just become a ghost for a wee bit?
Hal: No. No, you must have unfinished business. Something we must resolve before you can pass over.
Alex: Well we can poke around my business later. First I want to beat seven shades of shite out of Cutler. Hey, maybe that is my unfinished business.
Hal: Unfinished business tends to be something more life-affirming than beating someone up.
Alex: Not if you’re Scottish.

Tom: I ain’t never felt frightening before. Thank you. I could have killed all those people. I could have killed you.
Hal: Alex got the people out. I just lured you into the van.
Tom: I can’t believe I let it happen. I’m always dead stealthy with my transformations.
Hal: I’ve taken a step backwards too. I’ve been drinking blood. The first time was genuinely to gain Cutler’s trust. The second one wasn’t.
Tom: Where are you now?
Hal: Leo once said we are on the outside of humanity so that we might guard it. He made it sound like a privilege rather than a burden.
Tom: I don’t think any of us deserve that job anymore.
Hal: Then we must earn it back.

Snow: I last came to Britain in 1779. My people took me to a village. They’d already killed all the adults and used the bodies to create a tableau of scenes from my history. The children sang to me. And then we made wine from their blood. I was so touched. What do you have for me, Cutler, Nick Cutler?
Cutler (Andrew Gower): Only the world.
Snow: I was planning just to take the world. I didn’t realize I needed you to give it to me.

Hal: You don’t understand. Snow is one of the first. The blood that’s passed from vampire to recruit—generation after generation—you can trace it back to him. He’s in our DNA.

Cutler: Welcome to Britain, Mr. Snow. The revolution is being televised. {he turns on bad candid camera clips}
Snow: Judging by this we’d be doing them a favor. Am I missing something? Is he giving me a television set?
Cutler: I don’t understand. Someone must have recorded it.
Snow: Because I already have a television the size of a bed sheet.
Cutler: They must be suppressing it somehow. There were witnesses!

Snow: A tribute must still be paid, Cutler, Nick Cutler. It’s a question of protocol. Or there’ll be consequences.

Snow: To save humanity, she must be killed. And therefore she must live.
Cutler: But we didn’t know.

Snow: These eyes have looked upon pharaohs and the Son of a carpenter. And now they must look at you. Proudly showing me your idea like a child with a handful of its own excrement. I have never known humiliation, failure or obscurity. How does it make you feel? Like coming home, I would imagine. I’ve already forgotten your name.

Tom: Annie, the Old Ones have arrived. We saw ’em at the warehouse.
Annie: Yeah, Eve said they’d be here soon.
Hal: Eve’s been here the whole time.
Annie: Grown-up Eve. She died an adult, travelled back through Purgatory to find me because there was something I needed to know. She took me in to her corridor. {Alex snickers}
Alex: “Took me into her corridor.” Sorry. Misjudged the mood.

Annie: I had to see how terrible the future is. Because what I have to do to stop it is really really hard. Eve must die. It’s the last part of the myth. Eve saves humanity by dying.
Hal: Does the Nemesis—whoever it is with the burn—is that who kills her?
Annie: She is the Nemesis. She has the burn. I’m just the weapon.
Tom: Right. First off we need to get her out of here.
Annie: This is not a group decision.

Hal: Annie, are you saying you might hurt Eve?
Annie: How could you even say that to me! I could never ever hurt a child!
Hal: But if someone else tried to harm her what would you do then?

Hal: That’s all that junk you’ve been gathering.
Tom: Well you didn’t really think I was building a swimming pool in the back garden, didja?
Hal: How long have you been planning this?
Tom: Not really been planning anything. Just picked up off of McNair. “Always be kind and polite and have the materials to build a bomb”.

Hal: You really are one of the most remarkable people I’ve ever met.
Tom: Alright, calm down.

Hal: Let me come too.
Tom: Well then you’ll cop it along.
Hal: I’ve had a good innings.
Tom: What if Mr. Snow tells you not to?
Hal: Then you must bring matters to a swift conclusion.
Tom: I didn’t think you liked to shake hands.
Hal: Well then today is a day of firsts. And lasts.

Milo (Michael Wildman): It’s simple survival, Tom. You find the biggest kid on the playground and you stand next to him.
Tom: I didn’t know cowards have their own school.

Cutler: Hey. Didn’t I kill you?
Alex: Believe me, I’m as surprised that we’re having this conversation as you are.

Annie: I’m sorry.
Alex: Sorry? Annie, you saved her.
Annie: No. You don’t understand. I’ve betrayed you all. I’d rather let the world burn than hurt her. I let the vampires win and I’m always going to let them win. You need to get Hal and find your body and pass on. Because things are going to get very bad very quickly.

Alex: Who the hell were they?
Hal: I have no idea. But they weren’t vampires, or they’d have seen you.

Snow: “By the pricking of my thumbs, something wicked this way comes.”

Snow: I want you to run Britain for me. When the hurly burly’s done.
Hal: “The Devil showed him all the kingdoms of the world and said, ‘All this I will give you if you will bow down and worship me.'”
Snow: You think I’m tempting you? Surely the point of temptation is to prompt a decision that’s not yet been made.
Hal: What do you mean?
Snow: What do you stay alive for? That endless scurrying from bad to good to bad again. Must have been exhausting. And each return to bad brought with it a little flurry of debts. Tell me, if you admired humans so much, why do you keep inflicting your failures upon them?
Hal: Because I think one day I’ll win.
Snow: And if the lion wishes hard enough, perhaps one day he’ll become a man.

Hal: You have a whole army. Why this interest in me?
Snow: For time spent. Services rendered. Blood shed. But it’s not just that. Having one of the Old Ones on the outside. I don’t like the aesthetic.
Hal: Then I could flee. I’ve hid from you for fifty-five years. I can do it again.
Snow: Back to Southend? With a new werewolf and ghost like Leo and Pearl and Tom and Annie? Something about that format clearly appears to you.
Hal: How did you know?
Snow: Oh Hal. You weren’t hiding. I was just giving you the afternoon off.

Hal: I don’t want any part of this.
Snow: A man who wants to stop gambling doesn’t move to Las Vegas.

Hal: You were right. I stayed here because I knew you were coming. But not to join you. There was something else I had to do. Tom, get the baby and get out. It’ll never end. I’ll never be free until I do this.
Snow: There’s no shame in this, I want you to know that.
Hal: Get back.
Snow: It’s just the death rattle of your humanity. Mercy’s last hurrah.

Annie: Give me back my fucking baby!

Snow: I’m so pleased to finally meet you, Annie. Can I just say it was an honor watching you in action.

Annie: I don’t understand. How does keeping her alive save you?
Snow: I’ve often wondered that myself. Perhaps the remaining humans wait so long for her to save them that they never build a cohesive defense. That’s the funny thing about saviors. It can make one a little dependent.
Annie: And what will you do to the world?
Snow: Pluck it apart. Like a child with a spider.

Annie: I love you.

Eve: You did it, Annie.
Annie: So am I really here?
Eve: That was your unfinished business. All you had to do was save the world.
Annie: And I can’t go back?
Eve: No. But then, you never were one for following rules.

Eve: Go on. They’re expecting you.
Annie: Who?
Eve: Who do you think?
Annie: Oh, come with me. I want them to meet you.
Eve: I can’t. There isn’t time.
Annie: Eve, you’re fading.
Eve: I never happened now. I never grew up. I never saw the things I saw. That’s the only me now.
Annie: I’m sorry.
Eve: Don’t be. You saved us all.

Rook (Steven Robertson): There are things that should be seen. And things that should remain hidden. Last night in that nightclub, you caught a glimpse of something you shouldn’t have. Like when Dorothy sees the wizard behind the curtain. That wasn’t your fault. You weren’t to know. But see those things you did. And that means you have been noticed. By me. And you don’t want to be noticed by me. They’re not new things, they’re very very old. And you’re not the first to see them. So why were they a surprise? Why didn’t you know about them years ago? Because for as long as there have been creatures like that, there have been men like me. Silent, modest men whose job it is to keep the secret things secret. Think of us as the domestic staff of the world. We appear in the dead of night and sweep up the mess and bury the bodies so the world is clean and smart for you the next day. We don’t work for these creatures. Most of them don’t know we even exist. No. We work for you. But men like me are magicians too. And if we need to, we can make people disappear in a puff of smoke. Do you understand what I’m saying?

Hal: Why are you doing this?
Tom: ‘Cause you’re me best mate.