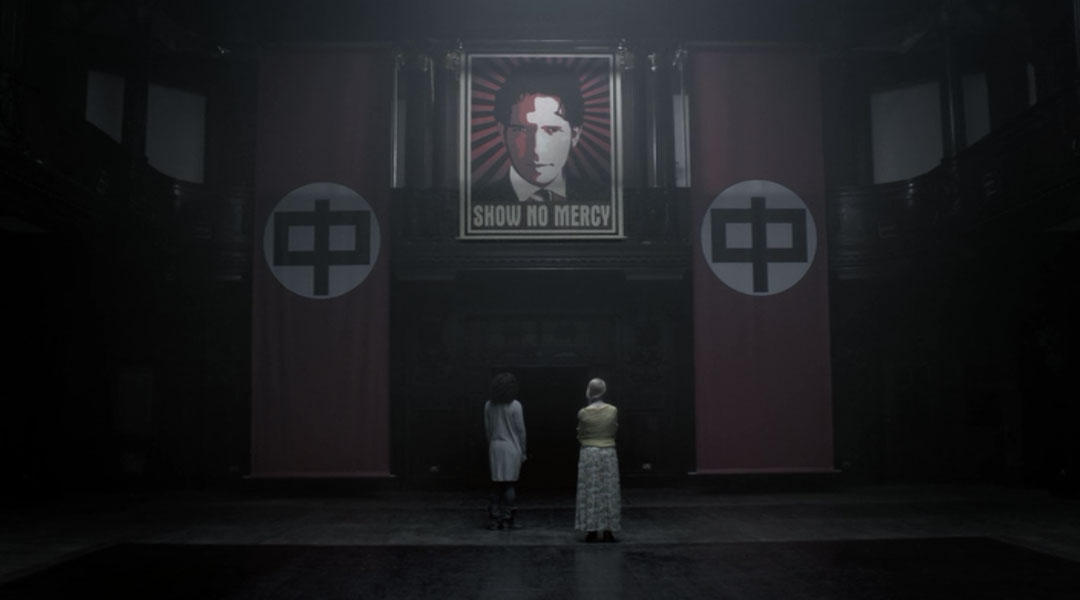 Hal: It’s not dissatisfaction. It’s a feeling more akin to having been born in captivity. A sinking realization that you’re dreams are just too big, too rich for this domestic world.
Cutler (Andrew Gower): Okay, are you planning to say anything I can use as your defense?
Hal: A defense for what?
Cutler: What you were arrested for. Illegal gambling. Specifically, according to the reams of documents and papers they found, dog fights.
Hal: Don’t worry about that. Until recently any dealings with the police were handled by our family solicitor, Robert Mercer. But he passed away unexpectedly on the twenty-fourth of this month.
Cutler: Today’s the twentieth.
Hal: Is it? Hm.

Eve (Gina Bramhill): I needed to tell you something, so I died and came back through my history. Like how Lia took Mitchell through his past. That’s what gave me the idea. Every single moment is here somewhere, you just need to—
Annie: How do you know about Mitchell?
Eve: You told me everything. Mitchell. George and Nina. Lia. McNair. Gilbert. Herrick. These are the stories I grew up with.

Annie: So what is it? This thing that you want to tell me.
Eve: Mum.
Annie: Just tell me. So I can go.
Eve: I have to show you.
Annie: Show me what?
Eve: My present. Your future.

Hal: What are you doing here?
Cutler: I was going to ask you the same thing.

Hal: You’re becoming the drunk who never buys a round.

Annie: So this is the future. Really?
Eve: For you, yeah.
Annie: Do people have jet packs?
Eve: No. No, mostly everyone’s dead.

Eve: We’re just days away, you know. The Old Ones arrive soon. That’s when it starts. At first no one believed it. They’d heard rumors but there were no photos, no footage. Then vampires killed the Prime Minister on national television.
Annie: And, um, what did we do?
Eve: You wanted to get me somewhere safe. But the airports were under siege, so you brought me here. You, me and Tom. But everyone else had the same idea. There must have been fifty thousand people here, climbing onto ferries, yachts, container ships and tugboats. The Biblical Exodus. You told me the ships were groaning with the weight of them. And then the screams started. Vampires started killing people from the back of the crowd. There was this huge surge as everyone pushed forward, trying to get away. But there was nowhere for them to go. They just… You told me it was like the water was boiling. So many people.
Annie: Someone must have fought back.
Eve: Oh of course. Yeah, the whole country stayed under human control for awhile, but they’d get so overwhelmed by refugees they had to start closing their borders and negotiating with the vampires. And then eventually they fell too.

Annie: Um… I’m not saying that I believe that you are, um, you know… who you say you are.
Eve: But?
Annie: Aren’t you the savior?
Eve: I am.
Annie: Then why is this happening, why don’t you stop it?
Eve: Because of you.
Annie: Me? How?
Eve: We’re getting to that.

Cutler: Funny thing is, I’ve been thinking about you recently. Maybe that’s why I buried the coroner there.
Hal: As a message for me?
Cutler: No, nothing like that. I really did think you were proper dead. No, more of an homage because of what I’m doing, I guess.
Hal: Which is?
Cutler: You’re very curious. That’s new.

Cutler: This is the crucible. This is where the Old Ones are headed. But here you are. Now that’s not the behavior of someone who wants to stay hidden.
Hal: When do they arrive?
Cutler: Soon, I guess. No one knows. You’re a circumspect bunch.

Cutler: Look, you could go straight to the top of the pile. That’s cool. That’s your rightful place. All I ask for in return is when they write the history of what’s about to happen, they give me a mention. And a statue. And maybe Brazil.

Hal: Believe me, only a matter of the utmost importance would compel me to disturb you at such an ungodly hour.
Rachel (Natalie Burt): Well if it’s important.
Hal: No. We are denying him the company of an angel. He shall be with you in a matter of moments. {she leaves} Fucking kill her.

Annie: Why are you looking at me like that?
Eve: I haven’t seen you since I was eighteen. I’ve missed you.

Hal: I like your neck.
Alex (Kate Bracken): Are you aiming for enigmatic? Or… Because what I’m getting is sociopath.
Hal: I bet your skin tastes of salt.
Alex: Okay, you know this is getting a little old. But lucky for you I’m yet to have sex under a coalition government, so…

Eve: Tell me about Tom.
Annie: I thought you knew him.
Eve: Not very well.
Annie: Well he’s a child. He’s lovely. He’s like a pet. A bloody big one. Like a Saint Bernard or a horse or something. But you know he’s physically incapable of lying or being cruel. So I do worry about him. Almost as much as I worry about you…. um, you know who. But he’s, yeah, he’s just a kid really. He shouldn’t be killing vampires, he should be getting disappointing A-level results.
Eve: He died here. A few years ago the vampires rounded up all the humans and werewolves they could find. The humans were branded with an “H” and the werewolves with a “W” and put into these camps. There was an outbreak of cholera. Hundreds died. And the vampires brought back the dogfights.
Annie: That’s what happened to Tom?
Eve: He was a cold man. Difficult to like, if I’m honest. There were rumors he killed some humans by accident and never got over it. Some say he held back during his final dogfight. Even after he transformed. He’d rather have died than kill again.

Annie: And where did I go?
Eve: After everything fell apart, you buried friend after friend. You began to lose control of your tangibility ’til eventually you just… drifted apart. Like smoke on the breeze.
Annie: Glad I asked.

Eve: I wanted to show you what happened to Hal.
Annie: Don’t tell me. They chopped him into little pieces and sprinkled him over the HMS Belfast.
Eve: Turn around.
Annie: That’s Hal.
Eve: One of their most ruthless commanders. Those camps I showed you, they were his idea. He’s violent, sadistic and, well, quite literally their poster boy.

Eve: You see my history and yours started to separate the moment I appeared to Leo and Pearl and Hal.
Annie: That was you. Why?
Eve: I’ve been trying to rewrite history. I thought getting Hal into the house would do that.

Eve: We’re done now. I’m taking you home. And then I’ll tell you what you need to do.

Hal: We can raid the dressing up box and pretend to be human, but ultimately what’s the point? Sooner or later we all go back to being the monsters we truly are.

Hal: And then what happens?
Cutler: The reveal. “Who will save us from the Big Bad Wolf?” Bum bah dah dah! It’s us. We have created a nightmare and now we will provide the antidote.

Hal: This is insane.
Cutler: I knew you’d be like this. As soon as you came back I could smell that mercy on you like cigarette smoke.

Hal: We weren’t sure if you would work it out when you tasted the blood. I don’t know if it works like that between husbands and wives. Well. {handing over the lost bet} Apparently not.

Cutler: You can’t do this! You’re Hal Yorke! I’m gonna heave.
Hal: Remember what you were?
Cutler: What I was?! Now you stole that from me! You dragged me into this world, you killed my wife. You turned me into a murderer, an addict. You made me abandon my whole species!
Hal: I know. And there aren’t words to tell you how sorry I—
Cutler: No! No, you do not do that and then apologize! No sir.
Hal: I can’t let this happen, Cutler. I will kill you if I have to. But I will not let you take their world. We don’t deserve it.

Alex: Just when I thought this holiday could not possibly get any worse.

Eve: All my life I’ve been carried around like a mascot, while the world around me crumbled and burned. I didn’t understand. Wasn’t I supposed to stop this happening. Then I got the final piece of the scripture. And there it was: in order to fulfill her destiny, the War Child must die. It was too late for me to change my world, but maybe I could stop it ever happening.
Annie: So you sent Hal?
Eve: Hal is a monster in my world. I assumed he’d kill me as soon as he worked out who I was. When that didn’t work I sent Kirby.
Annie: You put that animal in my home?
Eve: You’ve seen what was at stake.
Annie: I can’t kill you. All that stuff about the burnt arm, the Nemesis.
Eve: I’m the killer. I orchestrated this. You’re just the knife.
Annie: The burn.
Eve: Savior and Nemesis. Talk about multi-tasking.
Annie: You were in one of those camps?
Eve: They didn’t know who I was. I always had false papers. I was just rounded up with the others.
Annie: Eve, I am so sorry.
Eve: Look I could send a thousand threats, but Kirby made me realize your love for me would always defeat them. So I had to come to you direct. Show you the world you created.

Annie: Was I a good mother? I’m not fishing or anything, I just want to make sure that you felt loved.
Eve: It wasn’t a world for children. But yeah. You were. The best.
Annie: You’re very brave. And I am proud of that.
Eve: You make a bloody good cup of tea.
Annie: That’s my girl.

Eve: Remember. A moment will come when you have to choose between letting me live and letting me die. If you want to stop this from happening, you have to let me die.

Annie: Tom. The Old Ones might be here any day now. To stop them we might have to… do terrible things.
Tom: What choice do we have?
Annie: It’s not fair though.
Tom: No.

Cutler: Have you got a baby in there?
Tom: Yeah. George and Nina’s.
Cutler: The War Child?
Tom: Don’t tell me you believe all that.
Cutler: I thought Regus killed her.
Tom: No. He slipped her to Annie during the kerfuffle.

Hal: We have to stop Cutler. You don’t know what he’s going to do.
Alex: Yeah, I do actually. Before he killed me, he monologued the whole thing. I didn’t know people actually did that.

Hal: Anyway, must dash. Friend about to kill lots of people.

Alex: I’m really dead, aren’t I? This is all actually happening. I don’t understand. I came here for a holiday and now I’m dead.