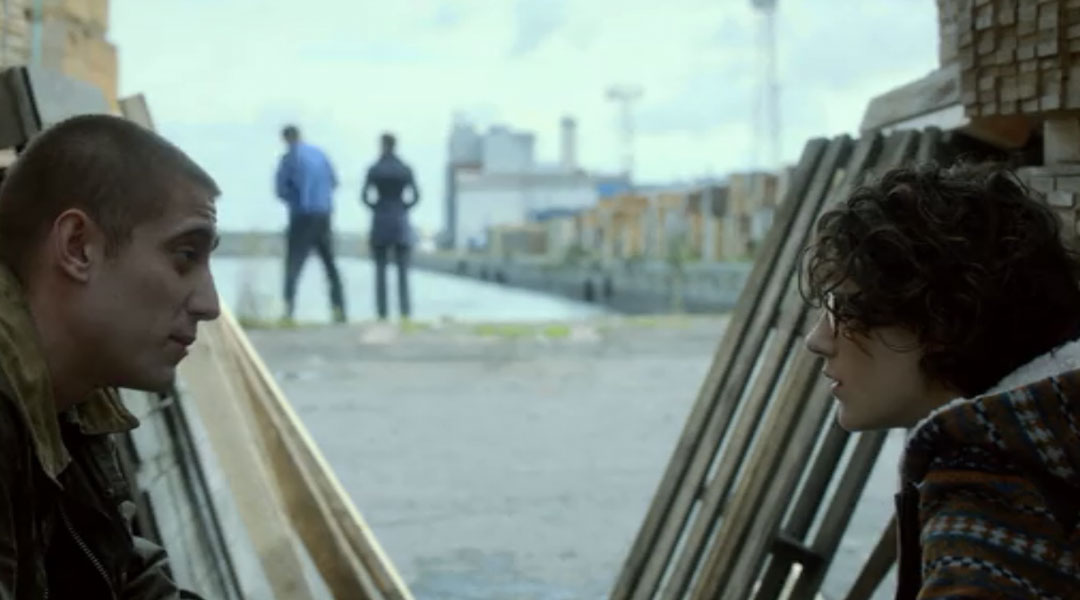 Hal: I was hoping you might be able to help me. Leo’s role in my rehabilitation was essential, and with him gone I have no one to set the tasks I need to keep me safe. So I was wondering if… perhaps… you could pick up where he left off.
Tom: You want me to, what, be like your new Leo?
Hal: Well no one could ever replace Leo. But perhaps you could perform a similar role.
Tom: I think I’d be honored, mate.
Hal: I think he would be too.
Tom: The toilets could do with a clean.
Hal: But don’t take the piss.

Tom about Allison: You think she’s a vampire?
Hal: Smells more like a werewolf.

Tom: That is the weirdest run.

Tom: It was a trap by the vampires. We didn’t know they were filming.
Allison: It’s had over a million hits.
Tom: “FX Fail”.
Allison: As in, special effects. Thankfully most people think it’s a fake.
Hal: “Hairy balls, LOL”?
Allison: Well this was just the start. You know we trended last full moon. {they look confused} On Twitter. There’s a Facebook group trying to hunt us down.
Tom: Facebook?
Allison: Don’t tell me you’re still on MySpace.
Hal: We’re more Ceefax people.

Allison: This is important! If people find out about the existence of vampires, werewolves and ghosts, there’ll be riots. There’ll be lynchings. It’ll be like the tuition fees march all over again.
Tom: If this has got anything to do with vampires, I know exactly where to look.

Cutler (Andrew Gower): Look, there’s no room at the inn. Kindly sod off.
Golda (Amanda Abbington): The last time someone spoke to me like that, I used their skin as a filofax cover. God I miss the eighties!

Cutler: Everything’s under control.
Golda: Really? So you have cars to move the Old Ones around the country. Hotels booked. Concubines.
Cutler: I’ve got something much better than that.
Golda: Oh ho, let me guess. Bunting!

Allison: Tom, that’s murder.
Tom: Like my dad used to say, you can’t already kill what’s dead.
Allison: We are not staking anyone. If you have to resort to violence you’ve already lost the argument.
Tom: You don’t know what these people are like.
Allison: And you don’t know what my debating skills are like.

Annie: Look, I know this is a lot to take in, but I’m going to help you get through this.
Too bloody right you are. It’s all your fault.
Annie: Yes I know, and I am really really really sorry about that.

Cutler: And you’re planning on sticking around for awhile?
Allison: Well I can’t exactly go home, can I?
Tom: Why not?
Allison: Who wants a werewolf for a daughter?

Allison: How many vampires have you slain?
Tom: Oh, um. Three or four… dozen.
Allison to Cutler: And you’re condoning this?
Cutler: Well you can’t exactly go to Ofcom.

Cutler: It’s a war. We’re all soldiers. Better pick a side.

Alex (Kate Bracken): You want the big guns then. Pull my finger.
Hal: Look, I think I may have mislead you. I was just being friendly.
Alex: Same here. So, um, you’ve got a girlfriend then.
Hal: No.
Alex: Boyfriend?
Hal: No.
Alex: Ah. You’re religious. Hence your weird blend of happiness and sexual repression.

Hal: So you’re officially courting now.
Tom: Well I don’t know. It’s fun training her and that. But we haven’t even held hands yet.
Hal: Then it is time to declare your intentions. First write her a poem and then speak to her father.
Tom: Annie said I should just get drunk and then try and snog her.

Hal: Who are you?
Annie: Okay, I’m sorry. I should have explained. Everybody, this is Emyrs. I… killed him.

Annie: Look it’s fine. I’m all over this. We just need to figure out his unfinished business and then move him on.
Tom: And you think that’s haunting our bathroom?
Annie: No, Tom. Of course it’s not haunting our bathroom. Unfinished business is something good and something righteous.
Emyrs (Anthony O’Donnell): Who says?
Hal: I knew a ghost whose unfinished business was to castrate her brother-in-law. Something to do with inappropriate Salsa dancing. So it could be anything really.
Emyrs: See.
Annie: I refuse to believe that.
Tom: Why?
Annie: Well because I’m still here, aren’t I. And when my time comes it will be to do something good.

Tom: Hal, I found these matches and some of them are the wrong way ’round.
Hal: We’ll soon see about that! {he grabs them}
Tom: It calms him down. I knew he’d get like this.

Tom: It’s not supposed to be like this.
Allison: Like what?
Tom: In the middle of all the violence.
Allison: But there’s a war on! You said. This is what it’s like. Snatch moments in air raid shelters.
Tom: You’re not a soldier.
Allison: I am!

Annie: So you have no friends, you don’t owe any moment and you have no regrets. Oh! Have you seen Titanic?

Allison: How’d it go with Alex?
Hal: I don’t think we’ll be seeing her again. She tried to kiss me and…
Tom: You killed her?
Hal: No! No, I think the routines have really helped suppress those urges.
Allison: So you chickened out?
Hal: That’s absolutely ridicu— How dare you!
Tom: Oh my god. You ain’t scared of killing, you’re just scared.
Hal: I have seduced several thousand women in my time.
Tom: Yeah, when you were all blooded up. Now that you’re sober you’re just a scaredy cat.

Emyrs: That was brilliant!
Annie: But totally unethical. {a door appears}
Emyrs: Maybe not. I knew I was right. Remember, when your time comes, it may not be a good thing you have to do.

Eve (Gina Bramhill): You have to come with me.
Annie: No no, not again.
Eve: No, Annie, listen to me. There’s never been anything more important.
Annie: I have a baby. Um, Eve. I have to look after her.
Eve: Annie, I am the baby.
Annie: What?
Eve: It’s me, Annie. Mum. I’m Eve.