I have an Old 97s story that I remembered today, brought on by people coming here for the Madden ad. Ahem:

When Satellite Rides was first coming out, the boys did a prerelease show for suits at the Turf Club. Somehow, I got tickets and was going with a friend. We got to the club and, as we were waiting, I pulled out the tickets and realized that, while I had two tickets, one of them was for Buckner (I think) who was playing the following week. Crap.

So I had to—very quickly—drive back to my apartment in downtown Minneapolis to get the right ticket and make the show. In the process of going to my car I slipped on ice and tore my hand open. Crap.

Anyway, I flew home, grabbed the correct ticket, checked maybe 8 times to make sure it was indeed the right ticket, and flew back to the Turf Club. Fortunately, my friend was still waiting outside, as the doors hadn’t opened yet. Yay.

Unfortunately, she was standing with this guy who had a crush on me. A crush that was not mutual. He had heard I had tickets and had come down to try and get in. Crap. In his defense, he was a huge Old 97s fan. Anyway, someone sold him a ticket while we were in line. Crap.

The doors finally opened and we found a decent table. There were Christmas lights everywhere and dozens of square posters of the album (I stole a three-panel table promo) and the new album was playing.

The show started. I should mention that I have never been to a disappointing Old 97s show. These guys have an energy that just blows your mind. And that night was no different. They played a mix of old and new.

Once the house lights came up people started chatting and mingling. One of my friends accidentally backhanded Murray Hammond. Then the light to the Clown Lounge went on and my friend decided to go downstairs, leaving me with a chance to let crush-boy down privately. It went quick, it was painless, and that was that.

My friend rejoined me and said that the band was downstairs signing autographs. I went down with cardboard poster in hand and weaseled my way to the back and up to Rhett. As we were waiting, my friend motioned to someone else on the couch and said:

“I talked to Harold.”
My response: “Um, that’s Murray Hammond.”
“No! He told that his name was Harold.”

Anyway, Rhett signed my poster (“Hi Claire!”), handed it to Murray who signed it and added a very Gilligan Island-esque “and the rest.” 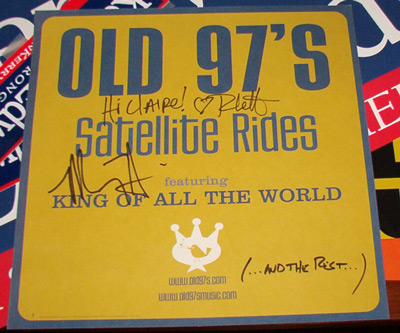 We finally got out of there and went to the bathroom. The door across from it was open and my friend (a Turf Club regular) decided we were going to see if any other band members were in there. Since she knew the guy at the door, he let us through.

Ken Betthea was back there drinking a beer. We barged in and sat down. I was completely awkward but my friend (a very beautiful and charismatic woman) just started chatting Ken up. She was born in Texas as was he, and so they talked mainly about that. I had nothing, so I just listened. We stayed there until the place closed. Good times.

I saw Old 97s again when they returned to do a First Ave. show a month or two later, and they completely rocked again. Strangely enough, after the show, we were in the upstairs bar and Ken walked by. I stopped him and said hello. He didn’t remember me but he did remember my friend and stopped to chat. The conversation was concluded by Ken crawling around on his hands and knees imitating his son searching for Easter eggs.

Have you seen the floor of First Ave? That’s dedication to a bit.

I miss the Turf Club. I haven’t been there in years. I used to go all the time. Mainly because back when it wasn’t as popular I could get in underage and watch 40-somethings line dance to bad country music. Add in the fact that it was walking distance from my alma mater and there you go.

In later years, once it caught on, my charismatic aforementioned friend was there almost every night. Another regular was Sean Na Na from Har Mar Superstar. One night, highly drunk, she made out with him.

From then on, he was Sean Na NO.