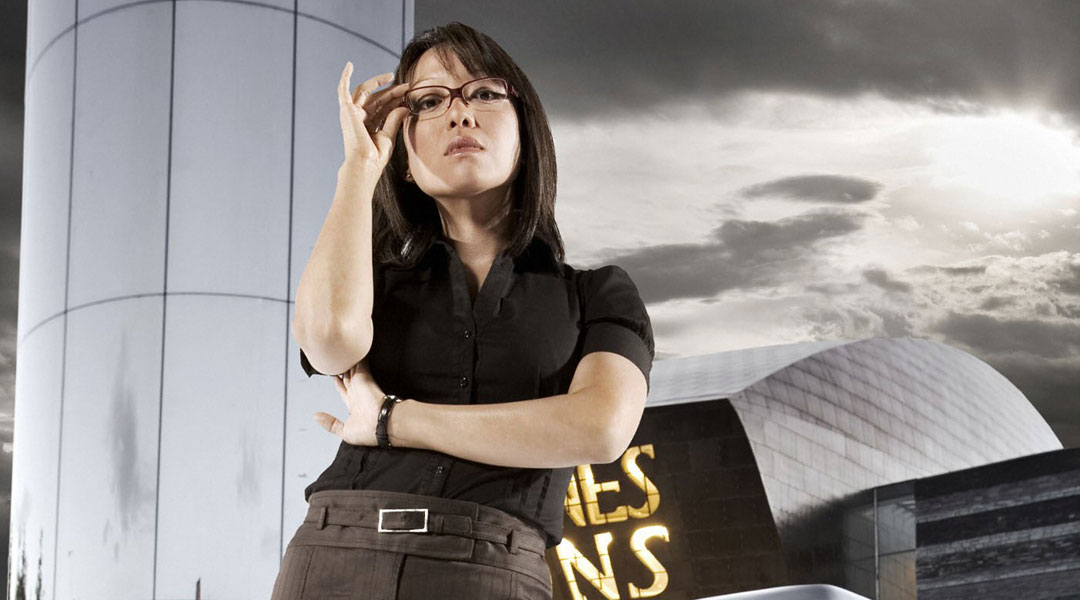 Owen Harper laughing: I can’t do this. I’m sorry. I’m rubbish, I give up.
Toshiko Sato: He set me off.

Tosh: He just…
Jack: Came and went.
Owen: Now that’s how I’d like to go.
Tosh: I’m sure we could arrange it.

Owen about Jack: So what’s he told you?
Gwen: What about?
Tosh: Himself.
Gwen: You’ve been here longer than I have.
Tosh: We were banking on you.
Owen: You’re a copper, you’re trained to ask questions.
Gwen: You don’t know anything?
Owen: Not who he is, not where he’s from. Nothing, except him being gay.
Gwen: No, he’s not. Really, do you think?
Tosh: No. Owen does. I don’t.
Ianto: And I don’t care.
Owen: Period military is not the dress code of a straight man.
Gwen: I think it suits him. Sort of classic.
Tosh: Exactly! I’ve watched him in action. He’ll shag anything if it’s gorgeous enough.

Tosh: All I’m saying is, once in awhile I’d like to drive.
Owen: Yeah, all I’m saying is no.
Tosh: Why not?
Owen: Look, I’ve shared cars with women before and I know what’ll happen. There’ll be an emergency. All rarin’ to go, I jump in, what do I find? Seat’s in the wrong position, the rearview mirror’s out of line and the steering wheel’s in my crotch. In the time it takes to sort it all out aliens will have taken Newport.

Tosh: Call me suspicious but this has all the hallmarks of a trap.
Jack: Yeah. I was just thinking the same thing. Anyone fancy a walk?

Toshiko: Charming place they’ve got.
Ianto: Judging by the sound reverberations and the… air quality… pretty deep underground. Chances of rescue?
Toshiko: We won’t need rescuing. I haven’t met a cell yet I couldn’t get out of.

Toshiko: That’s why there was nothing left on the body. They need to eat. pause. We’re food.

Tosh to Mary: What’s most amazing are the similarities with our own culture. But that can be horrible because we find lots of weapons, and it just makes you think, my god, everything wages war. It’s not just a trait of ours, but a trait of existence. It makes you feel so hopeless.

Tosh: What is this thing? Why did you give it to me?
Mary: I told you.
Tosh: The things I heard. What they thought of me, they really thought. God, these are people that are supposed to like me!
Mary: They do like you. People are complicated.

Jack: So I’ve just come from a really interesting conversation with a Detective Inspector Henderson.
Tosh: Right.
Jack: Interesting because, firstly, the man had the biggest hands I’ve ever seen. And secondly, because of the story he told me about you saving a woman and her kid from being murdered by her ex-husband?
Tosh: Yeah, no, I was going to tell you about that.
Jack: So why didn’t you?
Tosh: I don’t know. It wasn’t a work thing, just a… thing thing. Stuff happens all the time that’s not pertinent to here.
Jack: You do this all the time? So you secretly fight crime, is that it, Tosh?
Tosh: I didn’t want it to look like I was showing off.
Jack: The guy they arrested, Henderson said you heard him muttering to himself as he was walking along, and that’s what tipped you off.
Tosh: Mm. I couldn’t really work out what he was saying at first, and then it was like, Jesus!
Jack: That’s weird. Because when I’m about to murder someone I’m really careful not to talk to myself about it while I’m in the street.
Tosh: No, sure. I mean, that’s lesson one.

Tosh: So. I’m shagging a woman and an alien.
Mary: Which is worse?
Tosh: Well I know which one my parents would say.

Tosh: I read your thoughts. I didn’t see this. What else are you keeping from me?
Mary: What can be bigger than this?

Jack: What do bosses do in situations like these? You know, regular bosses. Do I get to beat people?
Tosh: We’ve got rules for that.
Jack jokingly: Argh! Red tape!

Owen: You know, we never gave it a cool name.
Tosh: I thought we called it the Resurrection Gauntlet.
Owen: Cool name.
Ianto: What about “The Risen Mitten”? I think it’s catchy.

Jack: Tread carefully, people. With respect. This is the life of Suzie Costello.
Tosh: That’s all we are in the end. A pile of boxes.

Tosh: When Suzie left Torchwood she was on the run. She wiped all her records. I couldn’t retrieve her files. She was good at computers. Hell, she was good at everything.
Owen: She was good at murder too. Laugh a minute, that was Suzie.

Owen: She gave Max a whole complex of subconscious triggers.
Tosh: Like, she dies, Max becomes a time bomb. He doesn’t see her for three months and—wham—the orders kick in. He follows Suzie’s program and starts killing.
Jack: And the whole chain of events forces us to bring Suzie back.

Gwen: Owen’s still not answering his phone.
Tosh: Well, he’s been even more erratic than usual since that thing with Diane.
Gwen: Since the what?
Tosh: It’s none of my business.
Gwen: What thing? What thing, Tosh?
Tosh: Owen and Diane. Before she took the plane. They had a thing. You knew that, right?
Gwen: Oh yeah. I just didn’t know they had a thing thing.

Tosh: I think these guys really don’t like to be watched.
Jack: See, I know it’s a character flaw but that makes me all the more determined to find out what it is they’re hiding.

Jack: Wow. Look at the chandelier. No neon lights back then. Just dashing young soldiers and pretty young ladies. And as they danced, the girls would look into their partners’ eyes, smile softly and say—
Tosh: Jack! Mind my laptop.
Jack: I was thinking more along the lines of, “And how long before you head off to war?”

Tosh: We really are in 1941. What if we can’t get back?
Jack: Flotsam and jetsam slips through all the time. We’ll get back. Look on the bright side. Gives you one hell of an excuse not to go to your party.
Tosh: I have a life there. And they can’t help us back at the Hub because I have the latest readings in here. People are staring at us.
Jack: We need to try to blend in.
Tosh: It’s easy for you to say. I’m the only Asian here.
Jack: Don’t worry. You’re with the Captain.

Tosh: Pearl Harbor, Jack.
Jack: Doesn’t happen till the end of the year.
Tosh: Granddad stayed in London but he was persecuted. If I stay stuck here, what will happen to me?
Jack: I’ll take care of you.

Jack: I’m sorry for dragging you into this.
Tosh: It was my choice.
Jack: I’ll look after you. But there’s nothing I can do for him.