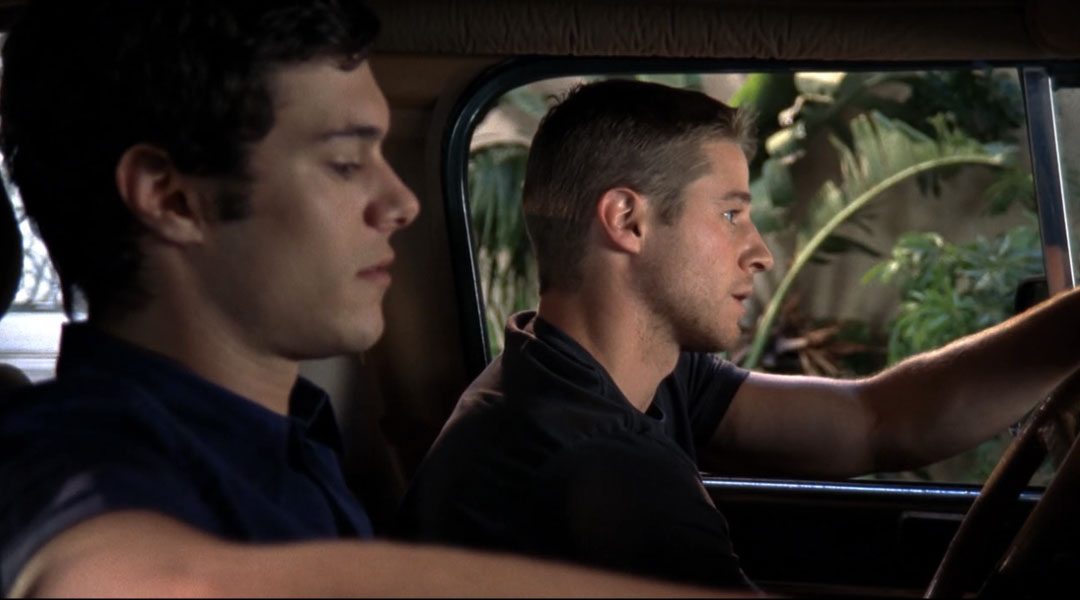 Seth: Can’t let you go.
Ryan: It’s not really your choice.
Seth: So what? Then you’re just going to find Volchok and either kill him or get yourself killed? That’s insane.
Ryan: This conversation’s over. {Seth jumps into the Jeep} What— what are you doing?
Seth: I’m coming with you. It’s not like you’re leaving me any choice.
Ryan: I’m gonna tell the cops. I just need to see him first.
Seth: No offense, but, like, nobody believes that.

Seth: So where we going?
Ryan: Mexico.
Seth: Perfect. I need Chiclets.

Summer finding Taylor in her dorm room: Will you tell me what’s going on. First you’re in Newport when you’re supposed to be in France. Then your mom shows up and you run away. How did you get here before me? Do you have a secret twin? Because that would explain so much.

Taylor shocked: When was the last time you shaved your legs? It’s like a forest, and— more shocked. Oh my god, your toenails!
Summer: Okay, yeah, I don’t do that stuff anymore.
Taylor: Obviously. You’ve got hobbit feet.

Sandy: Hm.
Kirsten: That’s exactly what I said.
Sandy: And there was nothing else?
Kirsten: Nothing.
Sandy: Angry. Nudfo. Chocolate Love. Nude-fo? Nudfo? Is that a word?
Kirsten: Not that I know of.
Sandy: When did you find this?
Kirsten: Just now. When I went to see if the boys had anything to give for the clothing drive.
Sandy: You try calling them?
Kirsten: No answer.
Sandy: You know what I think this is?
Kirsten: A coded message.
Sandy: Nothing. It’s probably the name of a band. Seth wrote it on a paper and put it in his pocket. Relax, sweetheart. phone rings Hello.
Seth: Dad, it’s me. Did you get my note? I had to write it in code in case Ryan found it.
Sandy: Right. The note.

Sandy: Where are you?
Seth: Don’t freak out.
Kirsten: Please say Newport.
Seth: We’re in Mexico.
Kirsten: He didn’t say Newport, did he?

USMC Guy (Steve-O): I love this guy. We’re doin’ shots!
Seth: I don’t really have time. I have to find my buddy, so why don’t you guys do shots.
USMC Guy: First we do shots. Then we find your friend. We’re brothers right?!
Seth: Well that’s a bit fast but—
USMC Guy: And then we get tattoos!
Seth: Right. This is great.

Julie: Something wrong?
Kirsten: The boys went to Mexico without asking us. I’m sure they’re fine, but—
Julie: Wait, Seth went to? I mean, he just doesn’t seem like Mr. Donkey Show. Not that they’re at a donkey show or even know what a donkey… Have you seen how great some of these clothes are?

Waitress: Is that true? That Volchok killed a girl?
Seth: Yes.
Waitress: I know where he is.

Kirsten: Are we crazy coming here?
Sandy: Driving all night to a foreign country where neither of us speak the language and we only have a vague notion of where they are? Yeah. It’s a little crazy.
Kirsten: How much longer do we keep doing this—rescuing them every time they’re in trouble?
Sandy: I don’t know. But for now, I think that’s our job.

Taylor: Look. You wanna be the next Julia Butterfly Hill, I support that. But to to push away Seth for some guy who read Siddhartha and did a couple of Outward Bound courses—
Summer: What? Are you talking about Che? Che is just my friend and that is all. This is not a love triangle. I don’t do love triangles anymore.
Taylor: Fine. But you’re using him and all of this Save the Earth stuff to hide from Seth.
Summer: I am not hiding from Seth.
Taylor: Really? Well. How often do you call him? Once a week? Once a month?

Seth: So did you kill him? I mean that was the plan, right? The real plan. Not the lie you told me when you said “Trust me, man.”

Kaitlin (Willa Holland): You haven’t moved in 18 hours. Is everything okay?
Julie: It’s fine. The world is an amoral toilet bowl and one day we’ll all be flushed.
Kaitlin: Okay, wow. That was a really uplifting message for your daughter.
Julie: It’s better you know now.
Kaitlin: Okay, I’m just going to go to the clothing drive.
Julie: Why?
Kaitlin: Because believe it or not, I actually want a life. And right now that means school and this stupid clothing drive. So I suck it up… You know some of us are still alive.

Ryan: Seth set me up.
Kirsten: He called. He was worried.
Sandy: C’mon, let’s go home.
Ryan: Why? So we can pretend like everything’s the way it used to be?
Sandy: We all miss her. It’s never going to be like the way that it used to be. But we are still a family.
Ryan: You don’t understand—he’s here.
Seth walking in: No. He’s gone.

Summer: Taylor, you got married!
Taylor: It was Paris. It seemed like the thing to do.

Kirsten: You okay? You hungry? Ryan is silent. This was my worst nightmare. When you first came to live with us. That Seth would follow you somewhere and get hurt.
Ryan: Yeah. I know I shouldn’t have taken him. I’m sorry.
Kirsten: I was going to say, all this changes. Now I have two children to worry about.

Sandy about Seth’s tattoo: You know it does have a certain—
Seth: Gay vibe. Were you gonna say gay vibe?
Sandy: Exactly. Let’s see what Summer has to say.

Julie: Kaitlin, I can’t do this. I can’t keep this family together and have you running around like Miss Clockwork Orange. I can’t. Honey, please. I need your help.
Kaitlin: Mom, do you really think that Dr. Roberts is at that conference by himself?
Julie: No. Of course not.
Kaitlin: Maybe I can make you some ice cream.

Sandy: I thought you might want to know that Ryan and Seth and back home. And Volchok’s disappeared.
Julie: What are you talking about?
Sandy: Stop it. You told Ryan where to find Volchok. Even for you, this is a new low.
Julie: Okay, you know what? You’re crazy. I’m just going to say goodnight.
Sandy: You sent Ryan down there to commit a murder. I could have you arrested.
Julie: But then you’d get Ryan arrested. And you’re not going to do that, are you?
Sandy: If anything happened to him. Or to Seth.
Julie: Okay, it’s late. And I’m not in the mood for threats.
Sandy: Sit down. After everything our family’s have been through, you would put our kids in danger?
Julie: At least you still have all your kids.