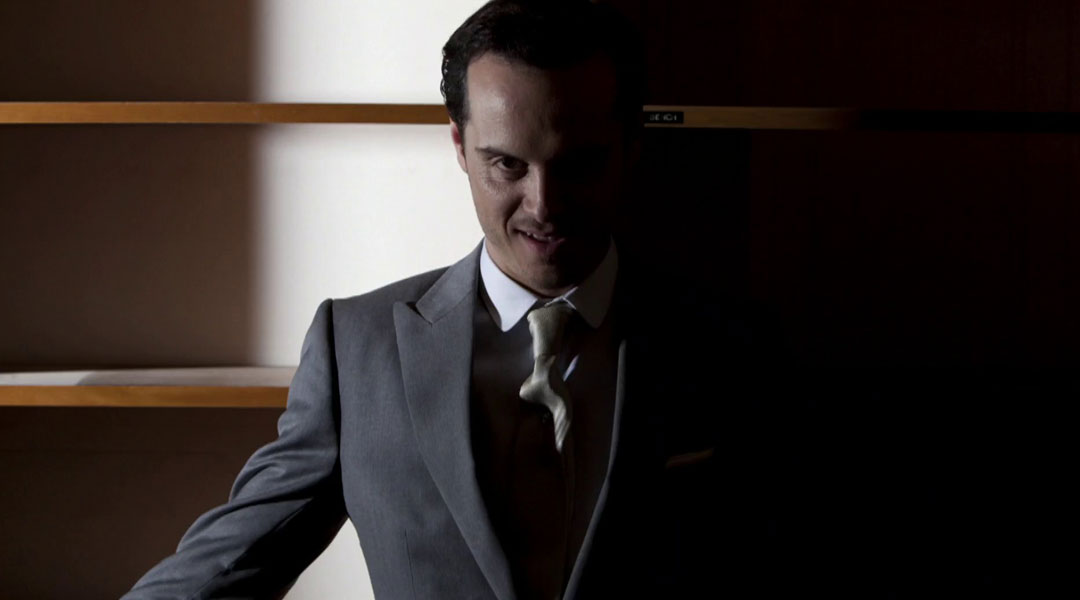 A Scandal in Belgravia

Moriarty: Sorry boys! I’m soooo changeable! It is a weakness with me. But to be fair to myself, it is my only weakness. You can’t be allowed to continue. You just can’t. I would try to convince you. Everything I have to say has already crossed your mind.
Sherlock: Probably my answer has crossed yours. He aims the gun at Moriarty and then down to the bomb-laden jacket…

A Staying Alive ring tone goes off.
Jim Moriarty (Andrew Scott): Do you mind if I get that?
Sherlock Holmes (Benedict Cumberbatch): Oh no, please. You’ve got the rest of your life.
Moriarty: Hello? Yes of course it is. What do you want? {he mouths “Sorry”} Say that again! Say that again and know that if you’re lying to me, I will find you and I will skin you.

Moriarty: Sorry. Wrong day to die.
Sherlock: Oh. Did you get a better offer?
Moriarty: You’ll be hearing from me, Sherlock. {he returns to his phone call} So if you have what you say you have, I’ll make you rich. If you don’t, I’ll make you into shoes. {he snaps his fingers and the snipers disappear}

The Hounds of Baskerville

Moriarty sits in a cell
Mycroft: Alright. Let him go.

Moriarty: You know when he was on his deathbed—Bach—he heard his son at the piano playing one of his pieces. The boy stopped before he got to the end.
Sherlock: And the dying man jumped out of bed, ran straight to the piano and finished it.
Moriarty: Couldn’t cope with an unfinished melody.
Sherlock: Neither can you, it’s why you’ve come.
Moriarty: But be honest. You’re just a tiny bit pleased.
Sherlock: What, with the verdict?
Moriarty: With me. Back on the streets. Every fairy tale needs a good old fashioned villain.

Moriarty: You need me, or you’re nothing. Because we’re just alike, you and I. Except you’re boring. You’re on the side of the angels.
Sherlock: Got to the jury of course.
Moriarty: Got into the Tower of London. You think I can’t worm my way into twelve hotel rooms?

Sherlock: How are you going to do it? “Burn me”?
Moriarty: Oh that’s the problem. The Final Problem. Have you worked out what it is yet? What’s the final problem? I did tell you. But did you listen?

Moriarty: How hard do you find it? Having to say, “I don’t know.”?
Sherlock: I don’t know.
Moriarty: Oh that’s clever. That’s very clever. Awfully clever. Speaking of clever, have you told your little friends yet?
Sherlock: Told them what?
Moriarty: Why I broke into all those places and never took anything.
Sherlock: No.
Moriarty: But you understand.
Sherlock: Obviously.
Moriarty: Off you go then.
Sherlock: You want me to tell you what you already know.
Moriarty: No, I want you to prove that you know it.
Sherlock: You didn’t take anything because you don’t need to.
Moriarty: Good.
Sherlock: You’ll never need to take anything ever again.
Moriarty: Very good. Because…
Sherlock: Because nothing—nothing in the Bank of England, the Tower of London or Pentonville Prison could possibly match the value of the key that could get you in to all three.
Moriarty: I can open any door anywhere with a few tiny lines of computer code. No such thing as a private bank account now, they’re all mine. No such thing as secrecy. I own secrecy. Nuclear codes. I could blow up NATO in alphabetical order. In a world of locked rooms, the man with the key is king, and honey, you should see me in a crown.
Sherlock: You were advertising all the way through the trial. You were showing the world what you can do.
Moriarty: And you were helping. Big client list. Rogue governments. Intelligence communities. Terror cells. They all want me. Suddenly, I’m Mr. Sex.
Sherlock: You could break any bank. What do you care about the highest bidder?
Moriarty: I don’t. I just like to watch them all competing. “Daddy loves me the best!”. Aren’t ordinary people adorable? Well you know. You’ve got John. I should get myself a live-in one.

Sherlock: Why are you doing all of this?
Moriarty: It’d be so funny.
Sherlock: You don’t want money or power, not really. What is it all for?
Moriarty: I want to solve the problem. Our problem. The Final Problem. It’s going to start very soon, Sherlock. The Fall. But don’t be scared. Falling’s just like flying except there’s a more permanent destination.
Sherlock: Never liked riddles.
Moriarty: Learn to. Because I owe you a fall, Sherlock. I. O. U.

Moriarty: Hullo. Are you ready for the story? This is the story of Sir Boast-a-lot.

Moriarty: Sir Boast-a-lot was the bravest and cleverest knight at the Round Table. But soon the other knights began to grow tired of his stories about how brave he was and how many dragons he’d slain. And soon they began to wonder, Are Sir Boast-a-lot’s stories even true? Oh no…

Moriarty (Brook): You said that they wouldn’t find me here, you said that I’d be safe here.
Kitty Reilly: You are safe. Richard, I’m a witness. They won’t harm you in front of witnesses.
Watson: That’s your source? Moriarty is Richard Brook?
Kitty Reilly: Of course he’s Richard Brook. There is no Moriarty. There never has been. Look him up.
Watson: What are you talking about?
Kitty Reilly: Rich Brook. An actor Sherlock Holmes hired to be Moriarty.

Moriarty: Well. Here we are at last. You and me, Sherlock. And our problem. The Final Problem. “Staying Alive”. So boring, isn’t it? It’s just… staying. All my life I’ve been searching for distractions. And you were the best distraction and now I don’t even have you. Because I’ve beaten you. And you know what? In the end it easy. It was easy. Now I’ve got to go back to playing with the ordinary people. And it turns out you’re ordinary. Just like all of them. Oh well.

Moriarty: Did you almost start to wonder if I was real? Did I nearly get ya?
Sherlock: Richard Brook.
Moriarty: Nobody seems to get the joke. But you do.
Sherlock: Of course.
Moriarty: ‘Atta boy.
Sherlock: Rich Brook in German is Reichenbach. The case that made my name.
Moriarty: Just tryin’ to have some fun. {Holmes starts tapping} Good. You got that too.
Sherlock: Beats like digits. Every beat is a one, every rest is a zero. Binary code.That’s why all those assassins tried to save my life. It was hidden on me, hidden inside my head. A few simple lines of computer code that can break into any system.
Moriarty: Told all my clients. Last one to Sherlock is a sissy.

Moriarty: I knew you’d fall for it. That’s your weakness. You always want everything to be clever. Now shall we finish the game? One final act. Glad you chose a tall building. Nice way to do it.
Sherlock: Do it. Do what? Yes, of course. My suicide.
Moriarty: “Genius detective proved to be a fraud.” I read it in the paper so it must be true. I love newspapers. Fairy tales… and pretty grim ones too.

Sherlock: I can still prove that you created an entirely false identity.
Moriarty: Oh just kill yourself. It’s a lot less effort. Go on. For me.

Sherlock: You’re insane.
Moriarty: You’re just getting that now? Okay, let me give you a little extra incentive. Your friends will die if you don’t.
Sherlock: John.
Moriarty: Not just John. Everyone.

Moriarty: Three bullets. Three gunmen. Three victims. There’s no stopping them now. Unless my people see you jump. You can have me arrested, you can torture me. You can do anything you like with me, but nothing’s going to prevent them from pulling the trigger. Your only three friends in the world will die. Unless—
Sherlock: Unless I kill myself and complete your story.
Moriarty: You gotta admit, that’s sexier.
Sherlock: And I die in disgrace.
Moriarty: Of course. That’s the point of this.

Moriarty: Off you pop. I told you how this ends. Go on. Your death is the only thing that’s going to call off the killers. I’m certainly not going to do it.

Moriarty: What?! What is it? What did I miss?
Sherlock: You’re not going to do it. So the killers can be called off then. There’s a recall code or a word or a number. I don’t have to die if I’ve got you.
Moriarty: Oh, you think you can make me stop the order? You think you can make me do that?
Sherlock: Yes. So do you.
Moriarty: Sherlock, your big brother and all the King’s horses couldn’t make me do a thing I didn’t want to.
Sherlock: Yes, but I’m not my brother, remember? I am you. Prepared to do anything. Prepared to burn. Prepared to do what ordinary people won’t do. You want me to shake hands with you in hell, I shall not disappoint you.
Moriarty: Nah. You talk big. Nah. You’re ordinary. You’re ordinary. You’re on the side of the angels.
Sherlock: Oh, I may be on the side of the angels, but don’t think for one second that I am one of them.
Moriarty: No. You’re not. I see. You’re not ordinary. No. You’re me. You’re me. Thank you. Sherlock Holmes. Thank you. Bless you. As long as I’m alive, you can save your friends. You’ve got a way out. Well good luck with that. {he kills himself}