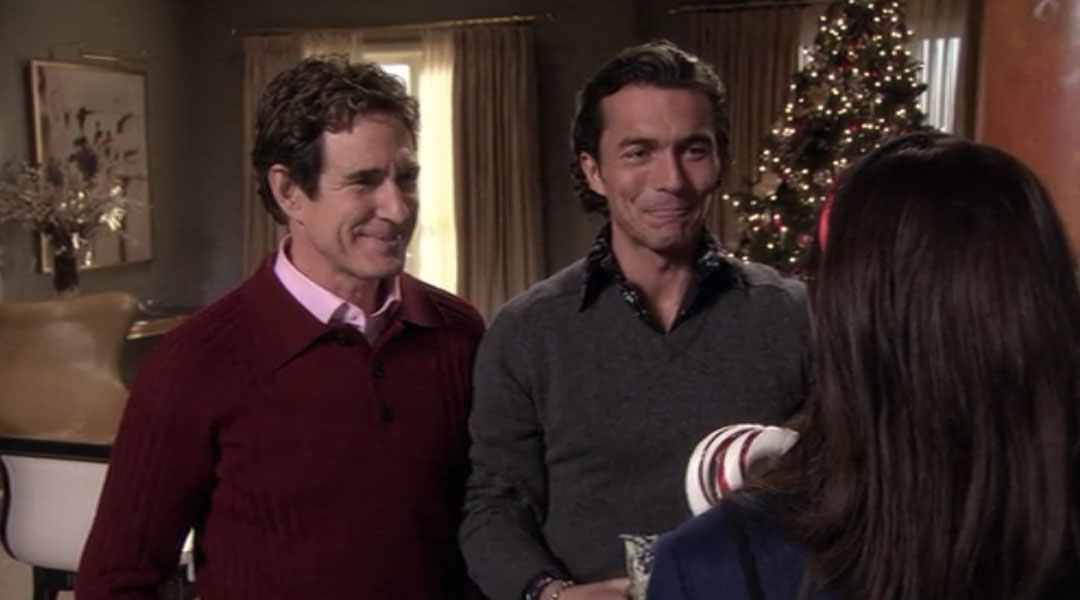 Gossip Girl: Hey Upper East Siders, it’s Christmas in New York. And along with the season comes the Constance Billard/St. Jude’s bazaar. Where the only thing “bazaar” are the donated items for sale.

Dan: How about an antique butter churn?
Serena: Oh my gosh. That would go so well with my loom.

Alison (Susan Misner): Well I guess Lily’s targeted her next billionaire.
Rufus: Actually I think she’s had him in her sights for awhile.

Lily: Well, that was awkward.
Bart (Robert John Burke): It wouldn’t be if you let people know what we were doing together.
Lily: I’m just learning to trust you again.

Bart: Not telling people about us ensures that we won’t work out.

Blair: Roman is a phase. My father belongs here with me. He only left New York to ride out the scandal. Time to come home, don’t you think?

Blair: Hey, did you want to ask me something?
Serena: Yes. A gift idea for Dan now that Vanessa got him the most thoughtful, Dan-like present ever.
Blair: Why don’t you just buy him a new outfit for Cedric and call it a day?

Roman (William Abadie): Blair {hugs her}. You are still perfection. Delicate yet full with flavor. Like a macaroon.

Rufus: My son, the writer.
Alison: Published writer.
Jenny: Yeah, you got your dream girl and your story in The New Yorker. Maybe you should just die now.
Dan: That’s true. I may have peaked.

Rufus: Why is he writing to you? Sending cards to the house asking to see you?
Alison: I don’t know.
Dan: You guys we’re still here. We can hear you.

Alison: Rufus, it’s over with Alex. I’m home now with my family.

Roman: The handsome man was just flirting with you.
Eleanor (Margaret Colin): That’s absurd! He was not flirting with me. {she smacks him with her bag}

Dan: May the best gift win.

Rufus: She told you to leave her alone.
Alex (Derek Cecil): I’m sorry. That’s not what she told me a couple days ago.
Rufus: You spoke to her?

GG: Spotted skating at Wollman Rink: the Blair Capades. All the grace of Nancy Kerrigan, but packing the punch of a Tonya Harding.

Alison: Hey, where were you? I tried to call you but your phone was off.
Rufus: I kept your date for you with Alex. He’s actually a pretty cool guy other than the fact that he’s in love with my wife. He told me about your phone call.

Rufus: Would you have come back if Jenny hadn’t shown up to bring you?
Alison: If I hadn’t would Lily be here right now?

Chuck’s voicemail: Leave a message and I might listen to it.
Blair: Chuck, you are not answering my calls. To torture me, I am sure. But please, for the love of God, do not tell anybody about us. Okay? Please. Please.

Serena: What are you, holding an open call or something?
Blair: I have one specific look in mind.

Vanessa: I could take this opportunity to gloat but I actually like you.

Serena: The only thing he wants for Christmas is snow. It’s not like I can give him that.
Vanessa: You sure?

Lily: Rufus, why are you calling?
Rufus: I just wanted to say Merry Christmas. Hope you have a good holiday.
Lily: Yes, well. I’m flying to Anguila with Bart tonight so I’m expecting it to be a great holiday. One for the ages, in fact. Goodnight, Rufus. Goodbye hangs up Good luck. What is the matter with me?

Eleanor: What are you doing here?
Jack: I was hoping to see you again. I thought it very good fortune that Roman tracked me down at the skating rink and extended an invitation.
Eleanor: Oh. Well. Enjoy the party.

Eleanor: How dare you invite strange men to my home.
Roman: Jack came? Go talk to him. [?}.
Eleanor: Roman! You practically picked him up off the street.
Roman: And then I googled him. His name is Jack Roth. He owns a prominent hedge fund with offices in London and Barcelona. And he finds you very attractive.
Eleanor: Well that’s no… excuse. And I am doing just fine without your romantic help.
Roman: Are you? Eleanor, we’ve been friends for a long time. Before Marc Jacobs went into rehab.
Eleanor: Friends don’t steal other friends’ husbands.

Blair: Vanessa, I think I’d like to help with this little project. would you come and help me find another pair of scissors? It’s so nice what you’re doing for your friend Dan. Helping his girlfriend make his Christmas present. Serena is so grateful because she likes to see the best in people. Me? I like to see the truth.
Vanessa: Yeah? What’s that?
Blair: I think you like Dan a little too much. Just thought I should let you know someone’s watching. Merry Christmas.

Lily: When you two are done hiding up here I’m taking you both out for dessert.
Serena: Can’t Mom. I’m busy.
Lily: But this is important for our family—it’ll just be the three of us.
Serena: Mom, anytime you say it’ll just be the three of us it means you’re dating someone new. Whoever it is, I don’t care. I’ll just meet him at the wedding.
Lily: Fine. Then I will just tell you who it is because you’re going to be seeing him around from now on. It’s Bart Bass.
Serena and Eric: Bart Bass?!?
Serena: Mom. You can not date Bart Bass.
Lily: You just said a moment ago you didn’t care who it was.
Serena: That was before I knew who it was.
Eric: He only has one facial expression. He scares me.
Serena: And he raised Chuck. That scares me.
Lily: Serena, as usual you’re being overly dramatic. I’m not marrying Bart. This is very casual. And regardless, I’m not asking your permission.

Jenny: You know, when I suggested this plan I didn’t know it would entail a robbery.
Dan: Hey hey. I left a donation. So it was more of a rescue than a robbery. You know, those abandoned trees in that lot were just going to be kindling after Christmas. And this tree we have is going to be loved and admired.
Jenny: You have a real talent for spin, my brother.
Dan: I wish I had more of a talent for heavy lifting.

Jenny: I thought that if I got them under the same roof that things would go back to the way they were. They haven’t, have they?
Dan: I think there’s a real possibility that they might split up.

Harold (John Shea): So you couldn’t last two days in town without contacting him?
Roman: I can’t believe you trust appearances and not me.
Eleanor: Harold, dear. Roman did not invite Freddy. I think Blair did.

GG: Looks like Daddy’s little girl isn’t sugar and spice and everything nice after all.

Eleanor: I wish you would just slow down for a minute and let Blair be.
Harold: I can’t believe that Blair would do something so cruel. And to Roman, who’s only ever been completely kind to her.
Eleanor: It isn’t Roman Blair’s lashing out at, it’s you. She was looking forward to spending time with you alone. And then you show up at our doorstep with your lover. Without a word of warning. How did you expect her to react?
Harold: Well I hoped that once we were together that it would work out. I suppose that was pretty naive.
Eleanor: Blair learned scheming from her mother. And unrealistic dreaming from her father. She tries really hard to act all grown up. But don’t you be fooled. She’s still a little girl. Who needs her daddy.

Jenny: Okay, what now?
Dan: Now you go in there, you distract Dexter the humorless concierge, while I try and sneak this in an elevator.

Dan: Oh, Mrs. van der Woodsen, er, Lily. Hi.
Lily: Dan. Jenny.
Jenny: Hi.
Lily: Tree.
Dan: Yeah, um, they don’t allow Christmas trees inside. Which is why we’re out here.
Jenny: Which is why Dan’s about to ask you for a favor.
Lily: Ah, does it involve distracting Dexter and sneaking into the elevator?
Dan: Why? Would that work?
Lily: No. Never. He has the eyes of a hawk and he takes his job very seriously.
Dan: So I’ve noticed.
Lily: But Bobby at the service entrance. I think he could be bought. Come.

Blair: Your house in France. It’s very nice, Daddy. I’m sure you and Roman will totally enjoy it.
Harold: And so will you. Because this— is your room.
Blair: It’s beautiful.
Harold: We already decorated it just for you.
Blair: A cat.
Harold: A cat. Named cat. Like in your favorite movie. It was Roman’s idea.

Serena: This is your story.
Dan: Yeah it’s the original. It’s right out of the spiral notebook.
Serena: I’m kind of scared to read it.
What happened on October 8, 2005?
Dan: Well, I was accidentally invited to a birthday party. Where I met a girl. She only spoke two sentences to me, but I’ve never forgotten her.
Serena: Wait, your story’s about me?

Dan: The arts and crafts were impressive, but how did you manage the real snow?
Serena: I’m well connected.

What’s going on?
We’re back for Christmas.
Well, Roman, you’re in for a treat. Because a Waldorf Christmas is like no other.

Gossip Girl: Hear those silver bells? It’s Christmas time in the city. Some families actually do make the yuletide gay, managing to leave their troubles far away.

Gossip Girl: Other families have a merry little Christmas, even when their troubles aren’t so far away.

Gossip Girl: Some presents might end up getting returned.

Bart: I know how you like Florida.
Eric: Yeah, Wow. Number One Fan.

Gossip Girl: But some gifts are for keeps.

Gossip Girl: Other presents come when you least expect them.

Gossip Girl: And everyone knows the biggest present comes in the smallest box.

Rufus: So, uh, Allison’s leaving. She’s spending time alone with the kids. And I seem to have walked all the way from Brooklyn to your doorstep. Without a jacket. In the snow. So what the hell. I miss you. And I have been missing you for awhile.

Bart: Lily, would you do me the honor of being my wife?

Gossip Girl: Then there are those boxes you wish you had never opened. Have a holly jolly Christmas. XOXO.—Gossip Girl.