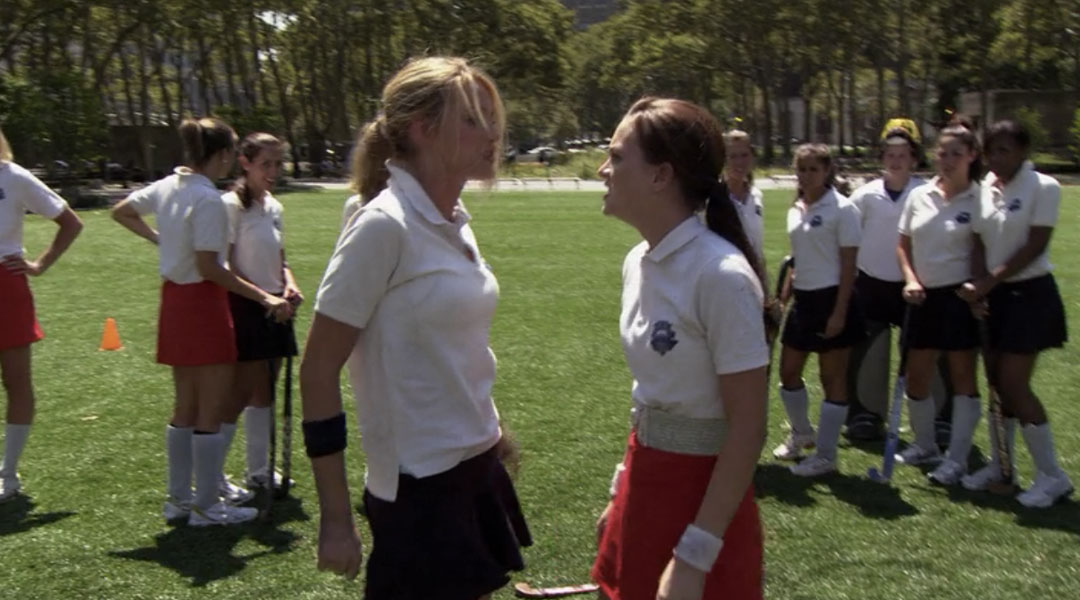 Gossip Girl: There’s plenty of upside to being the spawn of the fabulously wealthy. But the downside? Super successful parents expect nothing less from their offspring. And when it comes to college, that means the Ivys. It’s more than just getting into college, it’s setting a course for the rest of your life. And for those few who aren’t legacies, the pressures are no less. When parents have sacrificed for their children’s futures, what kid would want to let them down?

Constance Teacher: For those of you who dream of attending an Ivy League school, this mixer is the most important event of your life.
St Jude’s Teacher: But no pressure.

Rufus: Ah, it’s not that bad.
Dan: Looks like I shaved with a wood chipper.
Jenny: I was going with more of a chainsaw.
Dan: Not helping.
Jenny: Not trying to.
Rufus: Hey, look on the bright side: you’re not a hemophiliac. Otherwise you’d be in the emergency room.

Mr. Archibald (Sam Robards): Your mother and I didn’t work this hard so you could just make things up as you go along. Dartmouth. Law school. Blair. Soon you’re gonna have everything.

Lily: You know, you shouldn’t have stayed at your brother’s again. I mean why sleep there? It’s not like he can even see you—his eyes are closed.
Serena: Do you have one maternal bone in your entire body?

Serena: God, please don’t tell me it’s over.
Dan: You were there. I would say it’s pretty much over.
Serena: I meant the assembly.

Blair: Oh! Too bad you missed the assembly. Not that it matters. Brown doesn’t offer degrees in Slut.

Gossip Girl: Spotted: S. Not so fashionably late and dressed down by B. Game on, ladies.

Serena: I really want to believe that was an accident.
Blair: Then you must be delusional.

Gossip Girl: Hey Upper East Siders. We hear that World War III just broke out. And it’s wearing knee socks. Choose your side or run and hide. We have a feeling this one’s to the death.

Chuck: Why should I be chosen to be an usher? I’m Chuck Bass.

Serena: Oo! Angry guy, huh?
Dan: Short fuse. I’m trying to work on that.
Serena: Well let me know how that goes for you.
Dan: Yeah, I’ll keep you posted.
Serena: It’s a tough week.
Dan: Not for me, apparently.
Serena: Oh, you got an usher position?
Dan: No I didn’t. In an ironic though not totally unexpected twist, Nate got the one I wanted.

Chuck: Heard about the field hockey throwdown. All those mouth guards and short skirts. I hope somebody filmed it.
Blair: You’re heinous.
Chuck: Which is probably why you called.
Blair: You know me well.
Chuck: Women like to pretend they’re complicated. I know better.

Blair: Serena came home for a reason.
Chuck: One can only guess.
Blair: I’m done guessing. I want answers. And no one likes to be on the ground floor of a scandal like Chuck Bass.
Chuck: I am a bitch when I want to be.
Blair: Opportunity to cause some trouble, uncover a secret.
Chuck: It’s a yes for an answer.

Dan about Nate: Last year, I believe he had an original thought. It died of loneliness.

Blair: What is she doing there?
Chuck: What’s anyone doing there. It’s a facility for the disturbed or addicted.
Blair: You must have your own wing.
Chuck: You don’t get nearly enough credit for your wit.

Chuck: So the question is, what do you do now?
Blair: I was thinking total social destruction.
Chuck: And here I thought you were getting soft.

Administrator: Lucky for you, she seems to be in a good mood.
Rufus: Until she sees me.

Rufus: You’re in.
Dan: What?
Rufus: The Ivy Week party tonight. Your name will be on the program and everything.
Dan: You got me the Dartmouth spot?
Jenny: I knew you could do it, Dad.
Rufus: No you didn’t. And no, I didn’t. How do you feel about the refreshment committee?
Dan: Well there is no refreshment committee.
Rufus: Not until now.
Jenny: Oh god.
Rufus: What? Everybody gets thirsty. It’s really a position of power.
Dan: How did you secure me this prominent and simultaneously embarrassing position?
Rufus: By offering my own services.
Dan: Mm. Serving snacks?
Rufus: I’m the head of the entertainment committee.
Dan: Another committee
that didn’t exist until you left the house today.
Jenny: Way to go, Dad. Wait so who’s the entertainment?
Rufus: Since it was such short notice the only person I could get was… myself.
Dan: Kind of a staid affair for early 90s post-punk math rock, don’t you think?
Rufus: I’m bringing a couple of the guys. It’ll be Rufus Unplugged.
Jenny: Need a roadie?

Rufus: You can talk to that author you love, ask him anything you want.
Dan: Like his preference for soft drinks?

Lily: If you get at all anxious, sweetie, if you feel light-headed or panicky—
Eric: I’m fine, Mom. All I have to do is be normal. {Lily walks in} Or at least act normal.
Serena: Works for Mom.

Blair: Can you please explain how Serena’s commandeering the Yale rep while you’re supposed to be his usher.
Chuck: I switched. I’m trying to get into Princeton. {Blair looks furious} Oh, don’t get your La Perlas in a bunch.

Gossip Girl: Interesting choice of guests, B. Coincidence? I think not.

Nate: I liked your book.
J.L. Hall (Darren Pettie): Oh, thanks. What did you think of the epilogue? Some people really love it. The New York Times called it a cheap cop out. Warner Bros. is making a movie. I think they’re going to change the end.
Nate: Well I can see how the ending might not be all that… commercial. Would you like something to drink?

Bart Bass (Robert John Burke): Hey Eric. How was Miami?
Eric: It was good, thanks. You know, go Marlins.

Dan: You want to go to Yale now?
Serena: No, Brown. It’s just this thing with Blair.
Dan: I get it. I mean, since you don’t have to actually worry about getting into college, why not make the entire evening about screwing over Blair.

Dan: So? What’s he like?
Nate: Like a Dartmouth English Lit professor I have nothing in common with. Guess I could tell him how everything I have I got because I’m an Archibald.
Dan: You should mention Dr. Seuss. Theodore Geisel was his real name. He went to Dartmouth. Hall said he got the idea for The Petting Zoo from the Lorax.
Nate: The what?
Dan: Um. You know what, never mind. Just mention how his prose style is influenced by early Faulkner. You’ll be alright. Or… not.

Eric: …so we moved into the hotel, and it was just the two of us. I was really lonely.
Jenny: So that’s when you…
Eric: So I ended up at the Ostroff Center. My mom says they have the best counselors.What they really get paid for is to keep their mouth shut.
Jenny: I won’t say anything. I promise. So do you want to go back in?
Eric: And answers more questions about Florida?
Jenny: I have a grandma who lives in Fort Meyers. I can help think of some material.

Blair: Every year our schools choose to support one local institution that we feel benefits our community. This year our schools have chosen to honor the Ostroff Center. This semester our choice is a very personal one. Because the Center has helped one of our own.
Lily: What is going on here?
Blair: It’s because of their excellent program which aids so many young addicts and alcoholics that a student here with us today is clean and sober. At least for now. Can I please have Serena van der Woodsen join me on stage?

Gossip Girl: Spotted at the Ivy League mixer: S and B’s last stand. And only one gets out alive. Better take cover.

Serena: I just to thank my friend, Blair Waldorf, for recognizing the Ostroff Center and all of the good things that they do. Thanks Blair.

GG: Honesty may be the best policy in some ZIP codes, but not in this one. And not this week. Because “I was a teenage drug addict” is not exactly a winning college essay.

Lily: Why is Blair outing you for a drug problem that you don’t have? You don’t, do you?
Serena: Mom.
Lily: Well it’s not like we have some free open relationship.
Serena: And that’s my fault?
Lily: Look, what’s happened to Eric has put a huge stain on our family. But we are still a family.
Serena: Why do you think I did what I just did. Will you excuse me? I’m going to go end this with Blair.

Serena: So are we good now? Are we square?
Blair: No. Because nothing I do will ever be as bad as what you did to me.
Serena: Look I’m asking you, please, I’ll stop if you will.
Blair: You’re just saying that because today you lost. And you’re going to keep losing. Now if you’ll excuse me, unlike you I have a future to get back to.

Dan: If you ever need anybody to talk to. Or… not talk to. I’d be happy to do either.
Serena: I’ll keep that in mind.
Dan: And um, I know I said some things about you, and your world, and I’m sorry. Obviously I don’t know anything about your life.
Serena: Thank you.

Lily: Let’s go. Let’s get out of here.
Eric: There’s someone I need to talk to first.

Eric: Serena’s not a patient at the Ostroff Center.
Blair: Eric, you’ve always been a sweet kid and I can understand you trying to protect your sister—
Eric: I am.
Blair: I’ve never even seen you take drugs.
Eric: I’m not an alcoholic. I did this. {he shows her his wrists} And today Serena protected me.
Blair: Eric, I didn’t—
Eric: See that coming? Yeah. Well it must be a shock for someone who thinks she knows everything.

GG: Another bomb lands in Blair’s lap. Will she use it as ammunition or will she finally surrender and put down her arms?

Rufus: So you really impressed the guy, huh? Must be the way you poured those sodas.

Jenny: Will your mom be mad?
Eric: That you’re here? That would require her stopping by.

Blair: Whenever something’s bothering you I can always find you here.
Serena: Here for another cat fight? {Blair takes out a letter} What’s that?
Blair: A letter. I wrote it to you when you were away at boarding school. I never sent it.

Blair: Dear Serena, My world is falling apart and you’re the only one who would understand. My father left my mother for a thirty-one year-old model. A male model. I feel like screaming because I don’t have anyone to talk to. You’re gone, my dad’s gone and Nate’s acting weird. Where are you? Why don’t you call? Why did you leave without saying goodbye? You’re supposed to be my best friend. I miss you so much. Love, Blair.

Serena: Why didn’t you send it?
Blair: You would have what? You knew, Serena. And you didn’t even call.
Serena: I didn’t know what to say to you, or even how to be your friend after what I did. I’m so sorry.
Blair: Eric told me what happened. I guess your family’s been going through a hard time too.

GG: Spotted in Central Park: two white flags waving. Could an Upper East Side peace accord be far off? So what will it be? Truce or Consequences? We all know one nation can’t have two queens. What happens next? Only time will tell. XOXO —Gossip Girl.