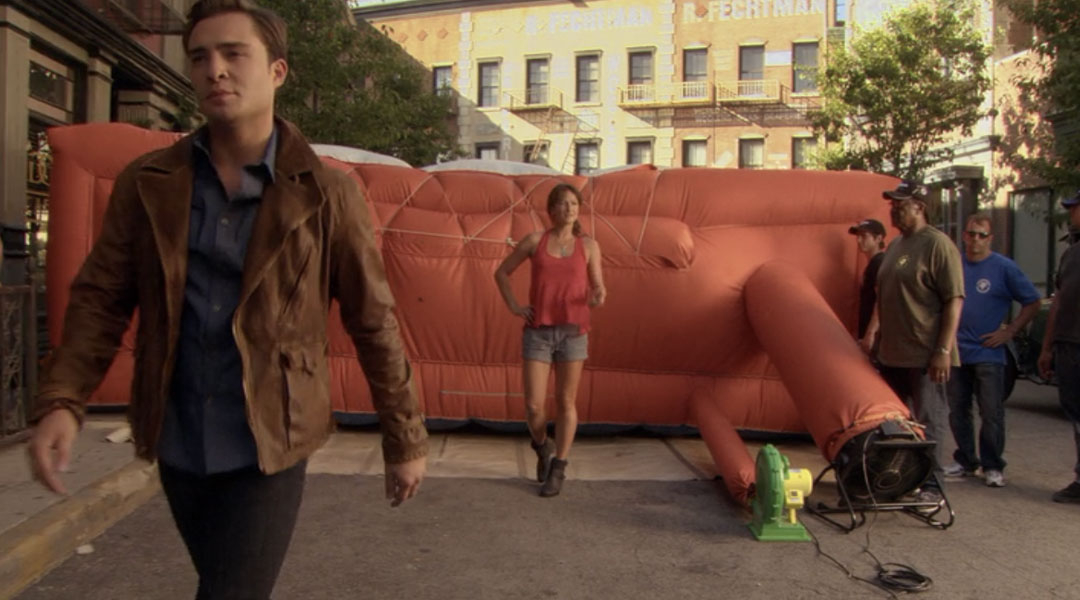 Dan: Dad! What are you doing here? I thought you’d still be in London helping Jenny set up St. Martin’s.
Rufus: She and Eric kicked me out when I didn’t know who Sierra Burton was, so I came back here early and thought I’d spend some time with you.

Dan: It’s Blair’s Save the Date.
Rufus: You’re not happy. You guys are still friends, right?
Dan: Yeah. Friends. I wonder if she invited Chuck.
Rufus: If he’s anywhere that FedEx can reach.

Chuck: Anything for me?
Nate: Nope.
Chuck: Well if you hear anything crazy it means I’m doing something right.

Louis Grimaldi (Hugo Becker): How does it feel to be home?
Blair: Oh, it’s going to be tough reacclimating after living in a palace. How will the penthouse do? But maybe we should skip the wedding planning and pull the blinds and just spend the day in bed.
Louis: We did that all summer. But we can’t put off our parents any longer. Would a present help motivate you downstairs?
Blair: How did you know just what I was missing. Shall I wear it to your uncle’s speech at the General Assembly tomorrow?
Louis: Unfortunately you will not be allowed inside until you are an official member of the royal family. Consider yourself lucky. [?] speeches are stronger than Ambien.

Serena: How did you guys end up here? And who’s boat is this?
Nate: This is Allegra Versace’s. Chuck won it in a poker game in Chiang Mai. He won Allegra too, but that’s another story.

Serena: Woah. Usually when you smile like this you look like a creepy Cheshire Cat. But this one is real. What is your secret and if it’s legal I want some.
Chuck: It’s not a substance. It’s a state of mind. A word.
Serena: Let me guess, a dirty word.
Chuck: “Yes”.
Serena: Yes, it’s a dirty word?
Chuck: The word is Yes. I say it at anything. If an opportunity presents itself I take it. There’s nothing I won’t try once. Even happiness.
Nate: He’s very inspiring. I’ve been saying all summer he should run an infomercial.

Jeremiah Harris (Jay McInerney): Read an advance copy of a story that Vanity Fair is running in their next issue. Reminded me of your work. Only better.
Dan: Who wrote it?
Jeremiah: That’s the thing. No one knows. Totally anonymous. And everyone’s talking about it.
Dan: What’s the story about?
Jeremiah: It’s a little Wharton and a lot Wolfe. The modern misdoings of upper crust Manhattan. I thought of you because the protagonist’s name was Dylan Hunter of all thing. Initials being what they are.

Princess Sophie (Joanne Whalley): I see from your list of demands, Blair—
Eleanor (Margaret Colin): Demands?
Princess Sophie: —that you would like to have peonies in your bridal bouquet.
Blair: They’re my favorite flower.
Princess Sophie: And they are very beautiful, but in our country a bride always walks with carnations.
Blair: To the nearest florist and demands a refund. I’ll be holding peonies.

Princess Sophie: I know this is very short notice, but not to worry. My dress is on the way.
Blair: Your dress?
Princess Sophie: Everybody else has been married in this dress, from my great grandmother on.
Blair: Louis, I already lost on the food and the flowers and the font. You know how important choosing my dress is for me.

Dorota: How about some cold Prosecco to kill the pain?

Gossip Girl: This just in: due to a dumpster dive outside a well-known Fifth Avenue pre-war, it appears someone we know and love is in a family way. So this is your humble Gossip Girl issuing an APPB. Who could the mother of our next scandal be?

Blair: What’s wrong, Dorota?
Dorota: Nothing. Prosecco?
Blair: No thank you. I think I need all my wits for the next round.

Gossip Girl: At least this secret is bound to show itself soon.

Blair: The first meeting was a disaster, S! He conceded to Sophie on everything. It was so out of control you would have thought he was Italian.

Blair: Aren’t you done out there? Los Angeles is a plastic surgery layover, not somewhere you live.

Rufus: I don’t get it, why would Vanessa steal your story?
Dan: To teach me a lesson. Let’s just hope I’m wrong. Which {checks the manuscript} I’m not.

Rufus: Where are you going?
Dan: To find the one person who can help me stop this before it’s too late.

Blair: We’re going to be married in three months. I need to know that we’re in this together and I’m not just standing here alone.
Louis: You’re not. I’m right here.
Blair: Those are just words. I need proof.
Louis: You’re right. The dress discussion can wait until tomorrow. But tonight, I show my mother that you come first.

Jane (Michael Michele):Serena. Are you looking for Marshall?
Serena: No, you actually.
Jane: I hope it’s to tell me why you didn’t follow up after our first meeting. I didn’t scare you away, did I?
Serena: No no, I just didn’t want to step on Marshall’s toes.
Jane: Why not? Keeping him on them is what David hired you to do. If it weren’t for you, he wouldn’t have even read the book.

Serena: Wait, have you seen my friends? {cue Chuck jumping up off a building}

Serena: Oh! I forgot to ask you, how was the audition?
Nate: Well after I told them I wasn’t an actor, they said that’s too bad because you’d be perfect as a kid from an East Coast political family who’s constantly manipulated while trying to keep everyone around him happy. They told me that.

Blair: Louis told me he would stand up to his mother tonight. So if he does, everything can continue the way it’s meant to. And if he doesn’t, he and his mother will have a lovely wedding in November without a bride. Or she can just take my place, which seems to be what she wants. Wish me luck.
Eleanor: Darling, is the stress of the wedding getting to you? Testing a good man who loves you never ends well.

Dan: Blair is the one this story’s about. I swear to you, if the story ever sees the light of day, you are not going to be happy.

Diana Payne (Liz Hurley): How about a tour?
Nate: Ah… yes. Absolutely.
Diana: This is a private tour.

Blair: I can’t even believe I’m answering this call.
Louis: I’m so sorry, Blair. Something’s come up that’s taking me longer than anticipated. It looks like I won’t make it to the [?].
Blair: You’re going vague on this one? Something’s come up? Why don’t you admit that you’re already at the UN with your mother instead of lying.
Louis: I’m not. I wish I could tell you where I am, but I made a promise.
Blair: And we know how you honor the promises you make. As long as they’re not to me. Tell your mother congratulations. She won.
Louis: What are you talking about?

Dan: Blair. What are you doing here? Did Louis—
Blair: I didn’t know where else to go. I wasn’t going to come here. I haven’t talked to you all summer and you’re the only person I know in New York right now. And I really need a friend. If you’re still…
Dan: Of course I am. What’s going on?

Blair: I am about to call off my engagement. I can’t marry someone who doesn’t stand up for me. Not even to his own mother. And when I tell him it’s over, I’ll need to get away. To clear my head. You were in the Hamptons?
Dan: Ah, Amagansett. CeCe’s house.
Blair: Is it empty? Take me there.
Dan: Okay.

Gossip Girl: Often all it takes to find a new path is to make a sharp turn and see what you find. But beware. Sometimes what you’re faced with is a dead end.

Stunt Coordinator: Okay. I know I don’t know you at all and you probably could give a damn about what I have to say. Most of the people in my business are in it because they’re thrill seekers or adrenaline junkies. But for some of them, there’s something dark going on. I think you need help.

Nate: My best friend was right. Saying yes makes everything better.
Diana: Well based on my own recent experience I’d have to agree.

Diana: Nice to meet you by the way…
Nate: Nate.
Diana: Hm. That’s a great name.
Nate: And you are?
Diana: Done now.

Marshall: I need this job more than you do, okay? I pay for my life. I have student loans, rent, a car lease. I can’t afford to get fired.
Serena: And I can?
Marshall: You’re Serena van der Woodsen. You do one lap around this party you’ll get ten job offers. You weren’t even looking when you found this one.

Blair: I don’t understand, are you following me now?
Louis: No Blair.
Blair: Actually, it’s fine if you are. Because I can do this in person then.
Dan: Louis is not here for you.
Blair: He’s not? What the hell’s going on?
Dan: Louis didn’t meet you tonight because he was helping me.

Chuck: Serena, you accepted responsibility without hesitation for maybe the first time in your life. And Nate, you had more fun not being you than you’ve had actually being you. Which means you now know you need to change.
Serena: Is it just me, or is what he saying actually making sense?
Nate: Maybe we’re not awake yet.

Serena: Have you ever thought about writing a book?
Chuck: People like me don’t write books, they’re written about.

Blair: What? Oh. No. Is it my hair?
Eleanor: I didn’t want to say anything in front of Louis but I found something hidden in the pantry. Is this why you have been acting so strange about Louis? Is there something you need to tell me?

Gossip Girl: Well well well, Upper East Siders, I got my answer after all. And it turns out the only thing expanding at the Waldorf residence is the help. Yet all this talk about expecting has got me thinking about expectations.

Dan: Hey, what’s going on?
Rufus: Lily has another meeting with the decorator. She’s redecorated so many times that it looks exactly the same.

Dan: So now I just have to make sure the book that chapter comes from never sees the light of day.
Rufus: There’s a whole book?

Gossip Girl: The thing about expectations is most of the time, someone else sets them for you. Yet you feel like they’ve been there all along. And you can’t wait to live up to them. But just because you know what’s expected of you doesn’t mean you still can’t surprise everyone.

Seamstress (Marie-France Arcilla): Do they know?
Blair: Know what?
Seamstress: How far along you are? I’d say six weeks. He sent me your measurements.

Gossip Girl: And you often find, what you least expect is right in front of you. Waiting to change everything forever. Whether you want to or not. XOXO —Gossip Girl.