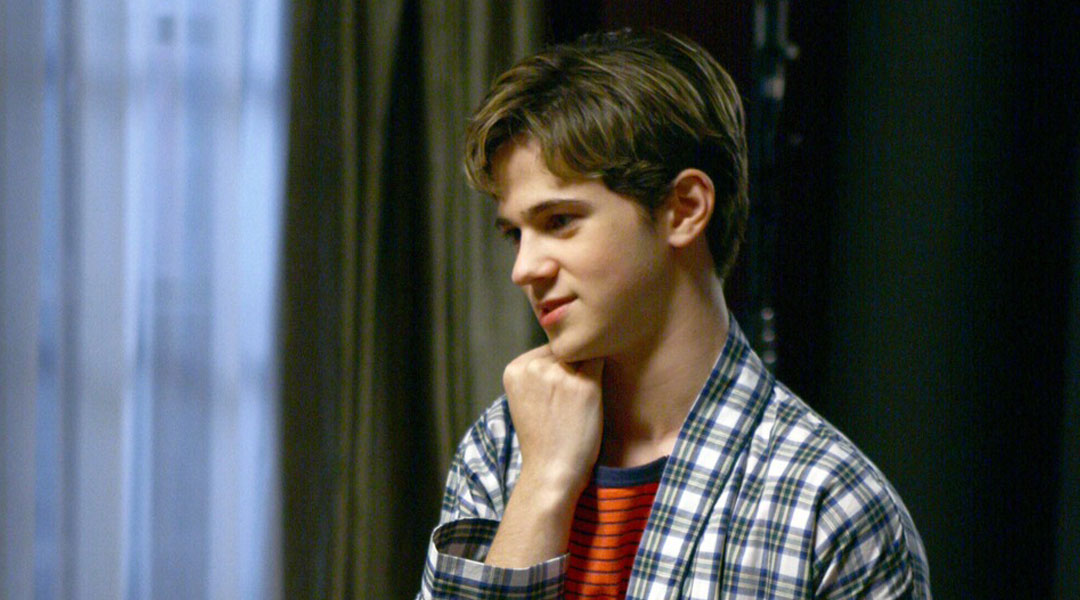 Serena: Hey. How are you?
Eric van der Woodsen (Connor Paolo): You know. I’ve been better.
Serena: Eric, I know I’ve been a terrible sister. I’m just so happy to see you.
Eric: Must be a lot of rumors why you’re back.
Serena: Yeah. But none of them mention you.
Eric: Just like mom wants, huh?

Serena: I talked to the nurse and I’m kidnapping you.
Eric: We’re going shopping, aren’t we?

View all quotes from the Pilot episode

Eric: So he waved? I wouldn’t have taken him for a waver.
Serena: Maybe he was just trying to be funny.
Eric: Maybe he’s shy.
Serena: Or he hated me.
Eric: No guy in the history of the world has ever hated you.

Blair: Eric, I didn’t—
Eric: See that coming? Yeah. Well it must be a shock for someone who thinks she knows everything.

Jenny: Surprise.
Eric: Jenny, hey. What are you doing here?
Jenny: Your SOS was heard and answered. C’mon, we’re breaking you out.
Eric: How are you— ? Wait. What do you mean, “we”?

Blair: Call me.
Serena: Yeah I will.
Blair: I was talking to Eric.

Eric: Even if you did cook, we don’t have an oven.
Lily: Preaching to the converted, Eric.

Lily: There’s nothing wrong with having Chinese food on Thanksgiving. Jews have been doing it on Christmas since forever. Look, a pumpkin. It’s festive, yes?
Eric: We’re going to eat a pumpkin?

Lily: These smell great.
Eric: Yes. So we can starve in a fragrant hotel room.

Lily: When you two are done hiding up here I’m taking you both out for dessert.
Serena: Can’t Mom. I’m busy.
Lily: But this is important for our family—it’ll just be the three of us.
Serena: Mom, anytime you say it’ll just be the three of us it means you’re dating someone new. Whoever it is, I don’t care. I’ll just meet him at the wedding.
Lily: Fine. Then I will just tell you who it is because you’re going to be seeing him around from now on. It’s Bart Bass.
Serena and Eric: Bart Bass?!?
Serena: Mom. You can not date Bart Bass.
Lily: You just said a moment ago you didn’t care who it was.
Serena: That was before I knew who it was.
Eric: He only has one facial expression. He scares me.
Serena: And he raised Chuck. That scares me.
Lily: Serena, as usual you’re being overly dramatic. I’m not marrying Bart. This is very casual. And regardless, I’m not asking your permission.

Bart: I know how you like Florida.
Eric: Yeah, Wow. Number One Fan.

The Thin Line Between Chuck and Nate

Eric: Is there something you want to tell me?
Serena: Am I that obvious? Yes, actually. That hair color is all wrong for you.
Eric: That’s funny. shows her the Gossip Girl blast. This isn’t.

Eric: Do you know how many times I was listening in on your conversations when you thought I wasn’t?
Serena: None, I hope.
Eric: You hope wrong.

Serena: What are you doing?
Eric: I’m hiding from my valet. He wants to put my socks on for me. Your servants are very attentive.
Chuck: You should meet Brigitta, the new Latvian maid.

Eric: Chuck is fun, okay? He’s cool and he doesn’t treat me like some freak that just got out of the Ostroff Center.
Serena: Who treats you like that?
Eric: Uh, guys at St. Jude’s, the girls at Constance. Suke, at the Korean deli on 75th Street.

All About My Brother

Serena: Hey, why the long face? Are you still sad that Mom wouldn’t let you go to Monte Carlo for the bachelor party?
Eric: No, I’m fine. I figured I’d let Bart, Chuck and Prince Albert have their fun—no, that didn’t come out like I meant it. Gossip Girl. Looks like Jenny’s been spotted at Gap sewing Stella McCartney labels onto pocket tees.
Serena: These rumors are getting to be ridiculous.
Eric: Oh, like the one where I’m Gossip Girl.
Serena: Hey, it made sense at the time. You have to admit, it did.

Serena: Who were you talking to?
Eric: Chuck.
Serena: You called Chuck?
Eric: Yeah, I’ve been talking to him a lot lately. Guy’s got his faults but he’s never judged me.
Serena: I’m your sister. We’re “us”. You can tell me anything.
Eric: I wanted to, but it’s not the type of thing you blurt out on the way to school. I was waiting for the right time.

Serena: I know this isn’t how you wanted it to happen.
Eric: I guess the important thing is that it’s happening.
Serena: I’m so proud of you. I’ll love you. No matter what you do, who you like, whose boyfriend kisses you. The people that care about you always stand by your side, okay?

Blair: Thought you might want this back.
Asher: Whatever you found, it’s not what it looks like.
Blair: It’s always what it looks like. And judging by the texts and photos look’s like a little more than a friendship.
Asher: What are you going to do with them?
Blair: Well, lucky for you, your “friend” is someone I actually care about or I would have used them against you and Jenny already. Too bad you don’t care about him the same way.
Eric: It’s okay, Blair. I can handle this.
Asher: What’s he doing here?
Jenny: What is she doing here?
Eric: You gonna tell her or am I?
Asher: There’s nothing to tell.
Eric: Gossip Girl was right. Asher was kissing someone this morning. Me.
Asher: He’s totally lying. Tell him Jenny. I was with you all morning.
Jenny: Yeah, Asher’s right. I was with him. Eric’s lying.
Eric: Why would I stand here in front of everyone we know and tell them if it wasn’t true? I’m gay. And so are you.

Lily: Hey, um. I made some tea. It’s probably iced now, but, um, my reaction earlier—
Eric: It’s okay, mom.
Lily: No, it’s not okay. You just caught me off-guard, I guess I, I just wasn’t ready.
Eric: Well I wasn’t ready either, so… it’s okay if you need time.
Lily: Well, since you’re being so honest I’m going to try as well. I’m scared. Life is tough enough as it is, you know? I want the best for you. And, um, I’m worried for your safety. And your happiness.
Eric: I have a better chance of being happy if I’m honest.
Lily: I know that. And I want you to know that love is whoever you’re with. Because it’s pretty great.

Much “I Do” About Nothing

Eric: Where’s my mom? Shouldn’t you be saying vows around now?
Bart: Your mother is a wonderful woman, Eric. But being on time: not a strong suit.