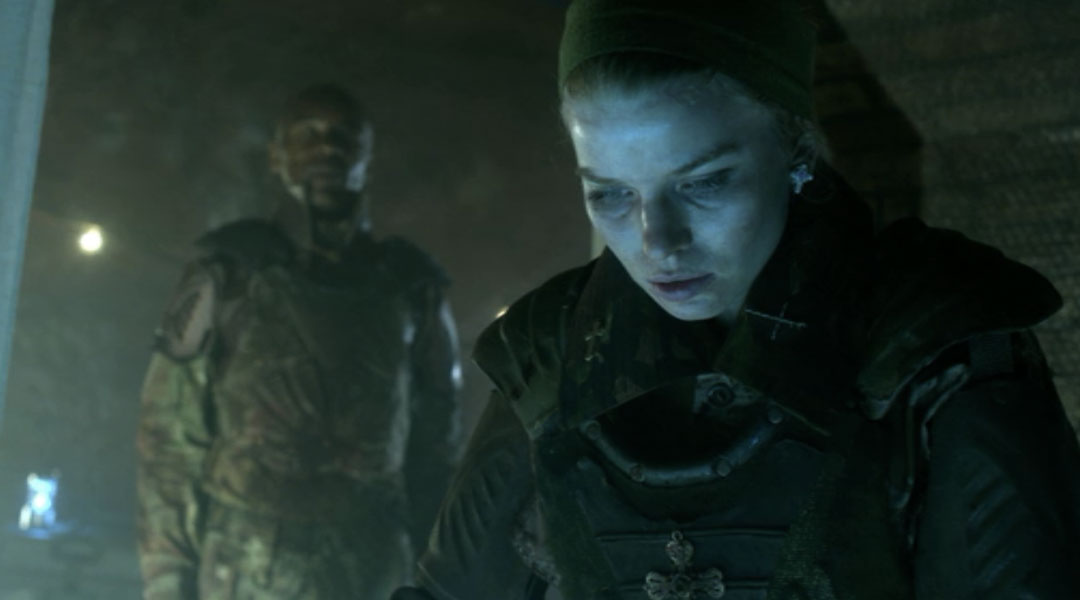 Voice over the radio: Ladies and gentlemen of the resistance, good evening. Oh you’d have been so proud of your comrades. They put up quite a fight. But we slit their throats and stamped on their bones all the same. New York has fallen. The resistance have been crushed. The earth belongs to the vampires

Tom McNair (Michael Socha): Two weeks ago, a werewolf was killed. Nina. She was a friend of mine. The vampire that ordered it was called Griffin. You’re going to tell me how to find him, aren’t you?

Annie: Only me. Didn’t want to Rent-a-Ghost in and startle you. Just… {she indicates the tea}. Oh, I’m itching for a cuddle. Go on, I’ll give you fifty quid. {silence} I was thinking that I could take her out. Just into the garden. Just to give you a bit of a break.
George: She doesn’t leave this room.
Annie: You know, she needs fresh air. Things to look at. I’ll make sure no one sees us. First sign of trouble, I’ll be out of there.
George: Nina left. Nina died. So like I said, she doesn’t leave this room.
Annie: This isn’t good for her. For either of you.
George: I’m protecting her.
Annie: She needs a father, George. Not a bodyguard.
George: Move. Out of the way.
Annie: Actually, what she needs is a name.
George: Every time I think of a name, all I can see is it written on a gravestone.
Annie: You think you’re the only one in pain here? The only one grieving. ‘Cause I’ve lost a lover and I’ve lost my best friend and I’m not— Look at this. They’ve won, you realize that. With you like this, they’ve already won, George.

Griffin (Alex Jennings): The rest of the Old Ones arrive in two months, by which time I will have obtained the child from the werewolf Sands.
Cutler: Sorry. Can someone explain to me the significance of this baby?
Griffin: First, its father killed John Mitchell in some ham-fisted gesture of affection. Then he killed my predecessor, Wyndam. Leaving me no choice but to have his bitch put down. But more specifically, that baby is the first of its kind. Werewolves have only ever been made, not born.

Cutler: What you’re suggesting, it’s brutal. Sure. But it shows a fundamental lack of understanding of how small the world is now. You think humanity’s just going to cower in its little hovel while you stampede. Before you reach the first major city, they’ll have raised an army. On Twitter.
Griffin: History has shown—
Cutler: Oh, god! You people are obsessed with history. You’ve got this guy— I mean you have literally brought a guy with you. The Keeper of Scrolls or whatever he’s called.
Vampire Recorder (Mark Williams): I am the Vampire Recorder.
Cutler: The Vampire Recorder. I’m so sorry, for a moment there I thought you had a really stupid name.

Griffin: We have to take the world by force because the world will never accept us willingly.
Cutler: So. We create a new context and we show them something worse.

Tom: Is she a werewolf?
George: She can see Annie. So probably.
Tom: Oh god, George. She’s beautiful. Have you given her a name yet?
George: I’ve been kind of busy.
Tom: Even McNair gave me a name and he ate my parents.

George: You hardly knew Nina.
Tom: I knew her enough.

Annie: Tom, I still have some relatives in Brighton. Maybe you would like to give them a call and try an get them killed too?
Tom: What?
Annie: The chimney. I heard every single word. It’s a brilliant baby monitor. Or at least it would be, if I was allowed to go and comfort her when she cries! Which I’m not!

Annie: Oh for gods sake, Tom! I can’t lose anyone else. I’ve said goodbye to so many people, I can’t even process it. My whole life was Mitchell and George and Nina. But now Mitchell’s dead. And… Nina’s dead. And George is… gone. And there’s nothing nice in this house anymore except that baby.
Tom: And it is such a big house as well. With all those rooms just going empty at night…
Annie: I don’t know what we are now. I don’t know what I am.
George: Let’s do it.

Leo (Louis Mahoney): Pearl won’t talk about it. I tried last night after Only Connect and she threw the remote control at me. So I’m asking you.
Hal (Damien Molony): The last full moon left you bedridden for two weeks. It’s likely the next one will likely kill you.
Leo: Thank you for your honesty.

Leo: What will it mean if I die for both of you?
Hal: The shop and the flat upstairs are in your name, so we lose those. And if a ghost loses their root and their familiars, they fade. She will disperse and drift away on the breeze like smoke.

Annie: I just think we need to talk about this first.
George: What’s to talk about? I thought you wanted me to stop moping.
Annie: George, I meant have a shower, not storm the Bat Cave. Besides it’s, um, Splodge’s first transformation.
George: “Splodge”?
Annie: Yeah. Daft, isn’t it? It’s almost as if she hasn’t been given a proper name.
George: The curse repairs what it damages. She’ll be fine.

Annie: Okay, Splodge. Brace yourself for some serious cuddling.

Leo: Together, we did the impossible. A werewolf, a vampire and a ghost. But this doesn’t have to be the end for you. Remember this moment. Remember what we had.
Hal: We will.
Leo: We were on the outside of humanity so we could guard it. Do you understand? So we could guard it.

George: They used baseball bats.
Tom: What?
George: She’d only gone to the shops. She hadn’t left the house since she’d had our daughter a week or so earlier. I told her, Get some fresh air. And they were waiting for her.

George: It’s a trap.
Tom: Where are they now?
George: Oh god.

Tom: George, you’re about to change. You won’t make it home in time. You’ll change in the street.
George: But the baby!
Tom: I know, I know, I know. But Annie will look after her. You know she will.
George: It’s a trap!

Tom: I thought we could do this together. Like me and McNair, back in the day.
George: Tom, I am not your fucking father!
Tom: You ain’t nobody’s father.

Griffin: It’s human. It’s just human. Did you know this was going to happen?
Werewolf Recorder: No. But it means… Ah. I need to check something out. {he runs off}
Griffin: Anyone need a baby?

George: Give me back my fucking daughter!
Griffin: Don’t panic. She’s alive.

Griffin: We’ve entered the end game. We’re going to swallow the world up in one big gulp. So come with me, don’t come with me. You’ve all got tickets for the Titanic either way. I just thought you’d like to spend a little more time with your nameless daughter before we start the pogroms.

Regus: Well basically, I never thought the baby wouldn’t be a werewolf. But when he wasn’t, I was like blimey! Then I remembered a bit of old vampire mythology. These are two pieces of a parchment that’s been split into three.
Cutler: Oh my god, that is human skin.
Regus: This is like the Dead Sea Scrolls. The Holiest of Holies.
Cutler: Yeah, but I bet the Magna Carta doesn’t have nipple on it.

Regus: This means the house the child was born into. This pyramid usually means Africa. But it also means Trinity. Supernatural Trinity.
Griffin: A werewolf, a vampire and a ghost share a house.
Regus: This means baby. But specifically, human baby. And this means moon.
Griffin: “Human child of the moon.” “Human child of werewolves.”
Regus: And it ends on this sequence. This means Godhead. Or the savior. This symbol means vampires. And finally, this symbol means death. {excitedly} We’re all gonna die—game over—because of this baby. {no one seems equally excited} I mean, we’re all gonna die, game over, because of this baby.
Griffin: We kill her. We kill her now.
Cutler: Wait a sec, you don’t believe this? I mean it’s tea leaves. It’s horoscopes.
Regus: Oh no no no. You don’t understand. We have no say in this. This is what happens.

Griffin: By the way, what happened to this piece of parchment?
Regus: No idea. Never been found.

Annie: I’m sorry, Dewi. But your day’s about to take a turn for the worse.

Dewi: At school I used to hang around with the asthmatics, but that was only because they couldn’t run away.

George: What’s going on?
Fergus: They’re going to execute the baby. You weren’t that attached to her, were you?

Woman (Gina Bramhill): I need to ask you for one last favor.
Soldier: Yeah. They explained. But will it change anything?
Woman: I don’t know.

Regus stalling: Are you sure you want me to do this?
Griffin: Of course.
Regus: Is that somebody’s phone?

Annie: Oh my god, George. What have you done?

Annie: If you harm that baby, I swear I will—
Regus: I knew you’d come to save her. She has to stay alive. She’s the War Child.

Dewi: What am I gonna do? I’ve just killed a vampire. They don’t like that. They know where I live!

Griffin: She begged, George. She screamed. She wept. I just want you to know that.

Regus: She’s gonna wipe us out. She’s going to save the world. It’s all here. You won’t understand it, but you should have it. Please take care of it.

Regus: How did you do that? Become half a werewolf?
George: I tricked my body into the transformation so I’d be strong enough to break out of the cage.
Regus: That’s bad. You’ll have started the internal transformation too.

George: Annie, listen to me. You’ll have to look after her now.
Annie: George—
George: Promise me!
Annie: I promise. Of course I promise.

George: Stay with her. The vampires will be back to get her. You have to stay with them always. Do you understand?
Tom: Yeah.

George: Annie. It’s okay. It’s just the end of my story. I have to be with my Nina.
Annie: Please George. Please not you as well, I can’t. I can’t lose you as well.
George: You take care of her.

Soldier: What are you going to do?
Woman: I’m going to save the world.

George: She’s going to save the world.

Hal: We need a miracle.

Annie: So this is how it starts.