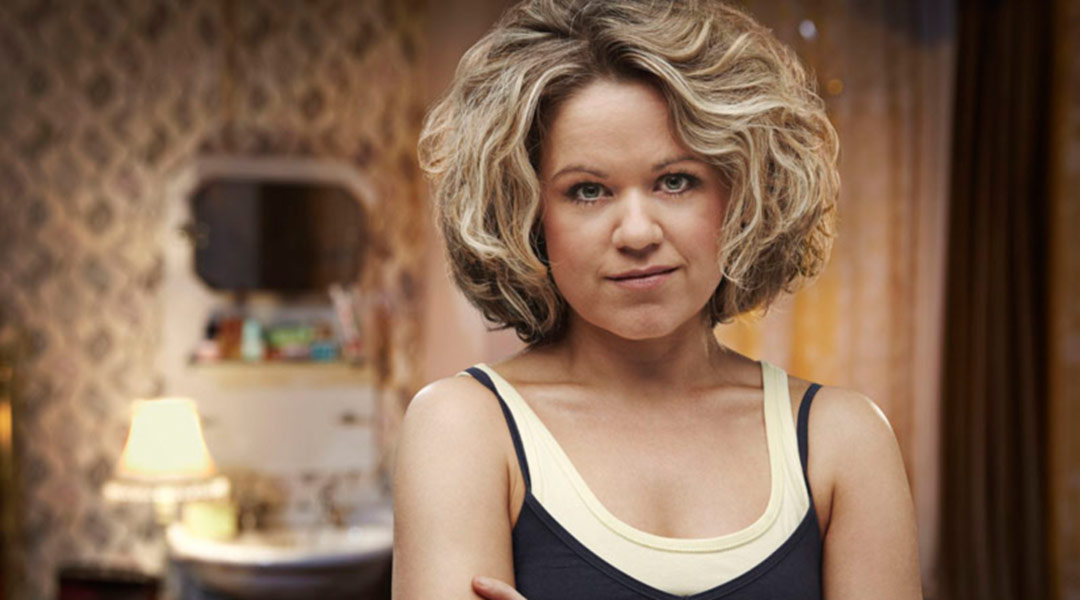 Nina Pickering (Sinead Keenan): Here’s the thing. Dr. Newell is a cock. This has been proven by scientists. Look, we haven’t got any beds. Okay? He knows this because he called me and I told him we haven’t got any beds. But you see what he’s done is, he’s gone ahead and discharged her from A&E and sent her here anyway. By now somebody else will be in Mrs. James’ bed, leaving her—as they say—without portfolio.
George: So where do I take her?
Nina: What’s your place like?
George: What?
Nina: I don’t know, could be the start of something. She has a twinkle.

Nina: There you are. God, I’ve been looking for you for days now.
George: You have?
Nina: I didn’t know your name, so I’m like, “He’s a porter, brown hair, about this tall.” {She compares her estimate to George’s actual height.} Actually… though I realize I was… making you too tall.

Nina: I’ve always wanted to do it with a porter.
George: Are you serious?
Nina: Am I serious? Does a chicken have teeth? I don’t know if it’s the polyester jacket or the whole minimum wage thing. But to meet one that not only hates women but attempts to humiliate them in front of his friend as well. Oh, man!

Nina: What were you doing with Mrs. James? Have you been bothering her?
George: I was just talking to her.
Nina: About what?
George: New Zealand, if you must know.
Nina: Why?
George: Her son lives there.
Nina: I mean why were you talking to her?
George: The other day I took her to physio, she said she wasn’t getting any visitors so I said I’d visit her.
Nina: Yeah, well, I suppose that’s easier than actual work.
George: It’s my day off.
Nina: Oh. Right. Well, ah, that’s… that’s good.
George: Can I go now?
Nina: Yeah.

View all quotes from Tully

Nina: A projector caught fire during an art history lecture at the language school. Most of them were asleep, apparently.

Nina: What’s the deal with you and George? Every time I see you, you’re together. It’s like you’re attached at the hip.
Mitchell: You checking me out or him? You know he worries about me getting harassed in the workplace.
Nina: Don’t worry, you’re not my type. Not anymore.
Mitchell: What about George? Is he your type?
Nina: George… George is weird.
Mitchell: No one’s denying that. But once you get past the weirdness he’s actual the nicest bloke you could ever meet.

Nina: I guess we’ve cured your, you know, your… premature ejaculation thing. {The door slams shut.} Oh, you are a dead man.

View all quotes from Ghost Town

Nina: You’re pissed off with me?
George: No. Nina, no! Your commitment to your job, it’s, it’s so attractive. Your passion, your… your… commitment. It’s up there with… ah.. er… !
Nina helping: My breasts?

George: I’m bad news, Nina. I’ve said so all along. Everything I touch turns to shit.
Nina: Because you let it! Look, if you’re having an attack of—
George: You think I’m having a down day, I’m not. Trust me. There is stuff you don’t know about me. Really dark, dangerous, nasty stuff and when you do know it, you’ll walk. So I’m only cutting to the chase. Well, not chase, because I will let you go. I won’t come after you. {she moves toward him.} No I mean it, Nina! I mean it! We have no future. We can’t…

George: You don’t need me and my problems in your life.
Nina: Don’t I get to decide that? God. Who was she, George? Who messed up your head, ’cause if you’d rather have me leave here thinking you’re a pedophile, than—
George: Nina please. Just go. I am not a— It’s not kids or anything those idiots out there say. But trouble follows me like a curse. And you deserve so much better.
Nina: Yeah, I would have listened. Years from now, when you’ve pushed everyone away—and you will—let that haunt you. I would have listened.

Nina: I thought I’m supposed to stay away from you.
George: I’ve just seen a child killed in front of me.

Nina: It comes so easily at work, you know. Verbal Elastoplast, always know what to say, but… now it’s…
George: I know. Nina. When I tell you I’m a man with a secret… I’m being as honest as I can be right now.
Nina: But you’re not ready to tell me what those secrets are.
George: Can you live with that? {she sighs and gets up and George starts to protest}
Nina: No no, it’s um… I want to show you something.
George: Oh my god, Nina. That—
Nina: You’re not the only one with secrets. Is your imagination doing overtime, hm? “What the hell am I getting into?” People are bastards. That’s all you need to know. If I talk about it I’ll have to remember it and…
George: I never want anything like that to happen to you again.

View all quotes from The Black Day

Where the Wild Things Are

View all quotes from Where the Wild Things Are

Nina: So you going to tell me what’s going on?
George: You know what’s going on. Mitchell was attacked.
Nina: There’s always something weird around you two. Mitchell—his condition, his body. It’s not right.
George: It’s a family thing.
Nina: “Family thing.” Jesus, what does that mean, George? It’s just riddles. Are you involved in this family thing?
George: I guess. By association.
Nina: Which means I’m involved by association. I don’t like that. {her pager goes off.} I can’t do this anymore.

Nina: What I said yesterday, I didn’t mean… There are things about you I’ll never know. I don’t want to know. And that’s fine. But whatever they are, they’re starting to bleed into everything else. And it frightens me.
George: It frightens me.
Nina: I need something normal now. Something kind.
George: You need me to choose between you and him.
Nina: I didn’t say that. Please don’t pin that on me. Look, I want to be happy. I want you. That’s not unreasonable. But my world and the world of you and all those secrets, I don’t know. Do you think they can exist together?

Mitchell: Have you seen George?
Nina: I was going to ask you the same thing. I just got this letter. He’s dumped me. He’s finished our relationship. He’s— Sorry. Who are you?
Annie: Annie. I saw you at the house.
Nina: No you haven’t. What are you talking about?
Annie: No. No, you’re right. I haven’t.

Nina: You tried to protect me from it all, didn’t you?
George: I thought maybe the two things could exist side by side. Something I hated and something…
Nina: Say it.
George: Something I loved.
Nina: Oh, it looks so painful. When it happens to you, what does it feel like?
George: There aren’t words.