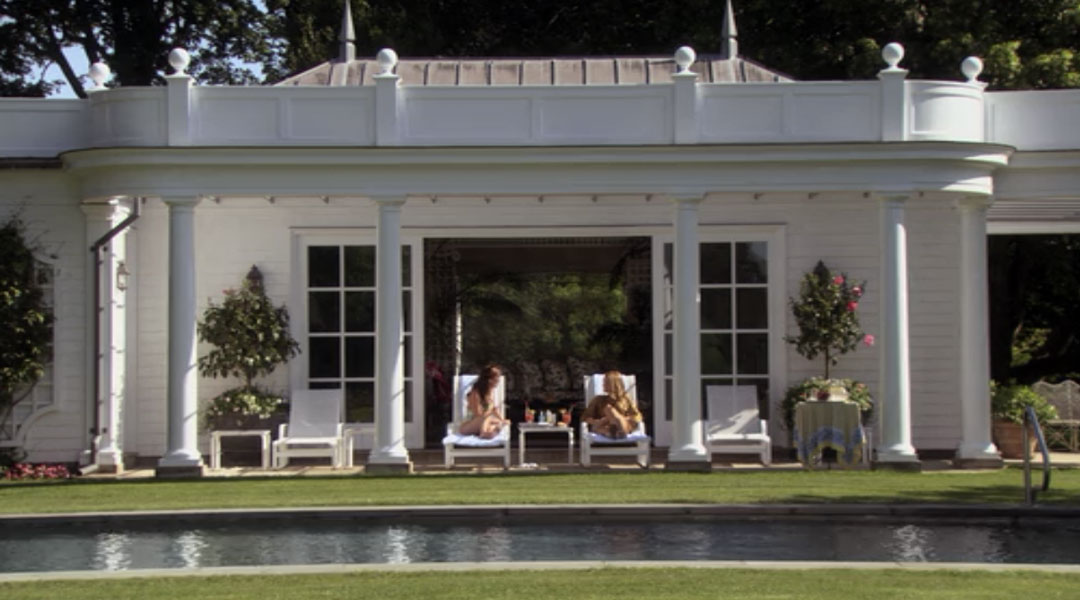 Gossip Girl: Unlike the rest of us, sex, lies and scandal never take a vacation. Instead, they take the Long Island Expressway and head east. To the Hamptons. Some would say summer is their busiest season. Think Park Avenue. But with tennis whites and ban de soleil. The players change, but the game remains the same.

Nate: I’ve been waiting for this all day.
Catherine Beaton (Mädchen Amick): Are you sure Serena’s still okay covering for you? She was totally cold.
Nate: Oh, she’s totally fine.
Catherine: But you haven’t told her anything?
Nate: She knows that I’m seeing someone that I’m not ready to introduce just yet. {She slams him back.} Or ever. Look, she needed time to decompress from her breakup. Covering for me works for her too.

Chuck: Girls you don’t know how thankful I am to have finally found a use for geometry in my daily life.

Gossip Girl: Spotted: Blair Waldorf at Charles de Gaulle, homeward bound. What could possibly make Queen B. abandon her two dads before Labor Day? We bet Chuck Bass wants to know. Also spotted: Serena van der Woodsen on Cooper’s Beach. Alone again. We’ve heard talk that things are heating up with Nate Archibald. And where there’s smoke, there’s usually fire. But if that’s the case, why has Nate fallen right off our radar and Serena is always sighted solo? Wonder what she’d do if she knew Lonely Boy wasn’t so lonely anymore.

{From the actual text: SPOTTED: Blair Waldorf at CDG, claiming her premiere space en L’Espace Premiere a whole week early. Now what could make Queen B abandon her dads and come home une minute before Labor Day? I have a million questions, but I bet Chuck Bass is the answer to all of them.}

Jeremiah Harris (Jay McInerney): I read from your favorite chapter. Or did you not notice?
Dan: I’ve read that chapter so many time sometimes I think I wrote it myself.
Harris: Speaking of, where’s that story of yours? You know, the one your internship requires you turn in.
Dan: Yeah, it’s, uh, imminent.
Harris: So is death. Be more specific.
Dan: I’m just doing a polish. It’s basically done.
Harris: You know Shapiro at The Review is looking forward to it.
Dan: And calling him was an amazing thing to do, really.
Harris: I told him it would be even better than your piece in The New Yorker. Don’t let me down.

Gossip Girl: As for Little J, looks like this summer has been all work and no play.

Jenny: I was hoping I could show you something I’ve been working on.
Laurel (Michelle Hurd): This isn’t school. I don’t look at your work.

Laurel: Put that away. Eggshell gives me a migraine.

Jenny: Finish your story yet?
Dan: Almost.
Jenny: Good. I’m hoping that by reading it I can find out why you and Serena broke up anyway.
Dan: Yeah. Yeah me too.

Serena: This is the first time I’ve seen you look in the mirror all summer. Here I thought if you did you’d turn to stone. Must be pretty nervous about something if you’re willing to take that risk.
Chuck: Ha ha, Sis. I’m on my way out to Lily Pond. With the triplets returning to Rio I thought I’d continue my tour of South America. Maybe Argentina.
Serena: Then what are the flowers for? You wouldn’t perhaps have heard a recent phone call with a certain best friend of mine. Who mentioned she’s on her way of here on the Jitney.
Chuck: What’s a Jitney?
Serena: If that’s your way of saying no then I’m glad to hear it. ‘Cause Blair will never forgive you for what you did to her.
Chuck: Who told you that little piece of advice, your boyfriend Nate?
Serena: Nate didn’t say anything.
Chuck: Good. ‘Cause I don’t think it’s wise taking relationship advice from somebody in a fake relationship. Call me crazy. Enjoy another night alone with your thoughts.
Serena: Good luck on your suicide mission.

Gossip Girl: Spotted: Chuck Bass waiting for the Jitney. A dozen roses in one hand, his heart in the other. You know what they say, a man is a good thing to come home for. But an even better thing to come home with. Ain’t karma a bitch? We know Blair Waldorf is.

Blair: You didn’t do anything? All summer? Please don’t tell me you just sat around watching The Closer and eating takeout from Nick and Tony’s.
Serena: No. Della Femina.

Chuck: You’re lying.
Blair: I am not!
Chuck: Your eyes are doing that thing where they don’t match your mouth.
Blair: I wasn’t aware that robots got jealous. Did they update your software while I was away?

Blair about James: I bet you’ll like him just as much as I do.
Chuck: Oh and if by that you mean I won’t like him at all, you’re right.

Jenny: As nice as it is that you’re encouraging me to get my designs out there, the White Party’s like, super-exclusive. I mean summer interns do not get to go. Last year they even turned away Jack Johnson.
Rufus: Sounds like a party with taste!

Dan: Working for you is very important for me.
Harris: And yet your actions have illustrated only the opposite.

Eric: If it’s apology-time you’re about three months too late. And let me guess, you want something.
Jenny: Um, yeah. Does it help if the new me just answered that honestly?
Eric: Not really.

Blair: Oo, a honk instead of a knock. Did someone order a townie?
Serena: And god, the lifeguard’s got a Camaro. And not in an ironic I’ve-got-a-Camaro way.

Eric: “How well do you know Blair Waldorf?” is kind of boring for those of us that know Blair Waldorf.
CeCe (Caroline Lagerfelt): Not to mention transparent.
Chuck: Well thank you, Grandma.
CeCe: Why is it when you say that word it sounds like an insult.

Chuck: Look, I know what that pin means to you. You gave it Nate the first time you said you loved him.
Blair: Well I asked for it back. I thought James should have it now.
Chuck: Do you, ah, really feel the same way about him as you did Nate?
Blair: I do.
Chuck: I’ll see you at school.

Blair: Oh my goodness, my pin must’ve gotten caught on your sweater by mistake.
James (Patrick Heusinger): Oh wow. I didn’t feel anything.
Blair: Neither did I.

Chuck to Eric: Do some research, Junior. I’m in the mood to be right.

Dan: I can’t believe that I get a job working for literary idol and he cans me. You know? I did everything he asked, from picking up his dry cleaning to keeping him sober before noon. Which was, believe me, the hardest thing I’ve ever done.
Rufus: Harder than finishing that story?

Rufus: So what is this story about anyway?
Dan: The dissolution of a relationship between two people from different worlds.
Rufus: Science fiction, huh?
Dan: Yeah.
Rufus: Well if I can offer some fatherly advice from 300 miles away—
Dan: I haven’t finished the story because I haven’t dealt with my feelings over the way I ended it with Serena.
Rufus: Couldn’t have said it better myself. Even if you’d let me.

Eric about Chuck: He’s got a PI on speed dial.
Serena marching over: Nate!
Eric: I know that face. That face is not your friend.

James: It’s no wonder you hate Charade. It hits too close to home.
Blair: You don’t understand. Chuck. Is an awful person. He does terrible things. He uses people.
James: And you think you’re any different.

James: I bet you don’t even like me.
Blair: No. Well, you’re a little boring.
James: Am I? Or are you just too interested in yourself to get to know me? You two deserve each other.

Gossip Girl: Spotted: Serena and Nate in a massive display of PDA. And that’s exactly what Dan Humphrey is. Pretty. Damn. Angry.

Dan: It can never be a simple answer with you. It can’t just be “I kissed Nate.” It has to be “I kissed Nate because someone I can’t name needed to see it for a reason I can’t explain.” It’s the same drama, different city.

Serena: Wait wait wait. No, let me guess. You can explain.

Dan: I haven’t been able to get you out of my head all summer. I was hoping, when I saw you I would know that we did the right thing. But I don’t feel that way. I don’t feel that way at all.
Serena: Can we not talk about this right now? I have to make sure that my grandfather’s suit from the 70s isn’t ruined. Any more than it was by being my grandfather’s suit from the 70s.
Dan: I missed that little laugh of yours.

Gossip Girl: When words get in the way, there’s really only one thing left to do.

James: I haven’t been honest with you.
Blair: Okay, spill it.
James: I don’t go to Princeton or Georgetown or any school whatsoever. I’m afraid I slipped up on that detail. My name is actually Marcus Beaton. I’m British. And a Lord.

Marcus Beaton: Tell me, what else do you think about me?
Blair: Keep talking in that accent and I’ll come up with something.

Chuck: I was scared that if we spent the whole summer together that you’d see.
Blair: See what?
Chuck: Me. Please don’t leave with him.
Blair: Why? Give me a reason. And “I’m Chuck Bass” doesn’t count.
Chuck: ‘Cause you don’t want to.
Blair: Not enough.
Chuck: ‘Cause I don’t want you to.
Blair: That’s not enough.
Chuck: What else is there?
Blair: The true reason I should stay right where I am and not get in the car. Three words. Eight letters. Say it, and I’m yours.
Chuck: I… I…
Blair: Thank you. That’s all I needed to hear.

Gossip Girl: They say summer love is fleeting, but sometimes what starts as a fling can lead to the real thing. A simple trip to the beach could be all it takes to clear our heads and open our hearts. And write a new ending to an old story. There are those who got burned by the heat. They just want to forget and start over. While there are others who want each moment to last forever. But everyone can agree on one thing: tans fade, highlights go dark and we all get sick of sand in our shoes. But the end of summer is the beginning of a new season. So we find ourselves looking to the future. You ain’t seen nothin’ yet. XOXO —Gossip Girl