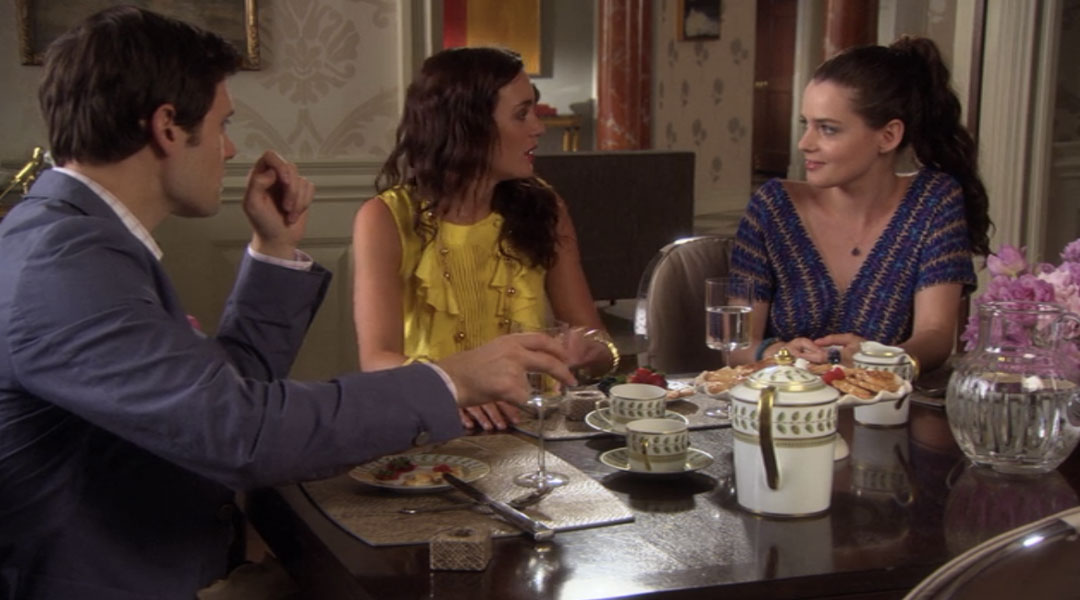 Blair: Are you sure this doctor is reputable? Your prenatal care is imperative.
Dorota: You never care about my womb before.

Doctor (Antony Hagopian): You two should work this out. Dorota can come back another time. Alone.

Blair: I’m sorry. I don’t know what’s come over me.
Dorota: Yes you do. You are pregnant too! We are like sisters now. Cousins. Distant cousins. Miss Blair, why you not say you are—
Blair: Do not utter the word. No one must know. At least until I have some time to figure things out.

Nate: I just can’t stop thinking about that woman from LA.
Chuck: It’s understandable, given your mother issues.

Chuck: So call your mommy, pick either job, forget about your mysterious lady from LA. If a woman wants to see you again she generally tells you her name.

Dan: I was wondering if you could share some of your bank-breaking secrets with me.
Serena: Well I thought you did all of your scheming with Blair.
Dan: No, she’s not speaking to me.

Dan: Don’t be too quick to option her life rights before you make sure she’s on her meds.

Gossip Girl: They say misery loves company, but sometimes it’s the company that makes you miserable. But nothing’s worse than company that overstays their welcome. Good luck, B. Have fun being the hostess with the mostest.

Charlie/Ivy (Kaylee DeFer): I get that working for this producer is a huge opportunity, but what about Columbia?
Serena: Well I’m taking this semester off and I’ll see how things go after that. My only issue is living with Cece. Last night at 2am her bridge game turned brutal.

Nate: No, I have the address. I just need her name, okay? […] Then why are you called “information”?

Nate: I’d ask you how you’re summer’s going, but seeing you’re with Chuck I would guess “weird.”
Dan: Oh, it gets weirder. I found him paying some really rough dudes to fight him.

Blair: I don’t understand. How am I to become an icon of style and taste if I can only where a burkha?
Princess Beatrice (Roxane Mesquida): I’m sorry, the dress code is mandated.
Blair: So you get to be Balmain and I get to be Barbara Bush?

Doctor (Kahan James): I have a hard time believing anyone has that high a threshold for pain.
Nate: Yeah, well he’s probably self-medicating. You should see his medicine cabinet. Some of that stuff’s not even legal in Mexico. {Nate laughs… the doctor doesn’t} No, I was just kidding.
Doctor: He claimed he couldn’t feel me touching his ribs during the exam. If he’s taking that many drugs, someone needs to keep an eye on him to make sure he doesn’t take anymore or do anything except rest. His injuries are bordering on dangerous.

Dorota to Beatrice: I’ll show you to door. And by door I mean elevator. {no movement} Over there.

Blair: Your people were bred to work through these conditions and give birth in a field.
Dorota: No fields in Krakow. And I have birthing suite at Lennox Hill.

Gossip Girl: A kiss is just a kiss.
Chuck: That hurt? Wish I could feel it.
Gossip Girl: Poor Lonely Boy. Even on the outer boroughs of love.

Ivy: We’ll be like Bonnie and Clyde.
Max (Brian J. Smith): How ’bout without the killing and robbing and car chases?

Blair to the Virgin Mary: Thank you. I will never question the paternity of your child again.

Dan: Blair, hey. Listen, I know you don’t want to see me now, probably not ever. But I’m not here to cause problems. I can’t say the same about Chuck. Have you seen him?
Blair: Walk with me.

Dan: What’s going on? Blair, I thought you were mad at me.
Blair: And you have my forgiveness if you shut up and guard the door.
Dan: It’s not like you to forgive me, or run away from a feast. Might this have something to do with you sleeping with Chuck?
Blair: How in the world did you know that? Forget it, I don’t even have time to care. What don’t you understand about “guard the door”?
Dan: I can’t believe that I thought you changed last year. And since you didn’t, Chuck is now going off the deep end trying to get your attention. Again.
Blair: No. Now that’s where you’re wrong. Whatever he’s doing isn’t about me. He was the who told me to marry Louis. And he meant it.

Blair: Now you’re going to be sorry you didn’t guard.
Dan: Woah. You’re gonna go? With me in here? I’m not sure our friendship can handle that.
Blair: Friendship is a tenuous term. Now be a gentleman and run the water.

Dan: Blair, this isn’t a joke. We are not leaving this room until you agree to get help.
Blair: I don’t need help. I’m not bulimic. I’m pregnant.

Gossip Girl: While one mother’s life leads her to Heaven, another’s is going straight to Hell in a Moses basket.

Blair: Beatrice. You have to understand, it’s still so early. I didn’t want to get Louis’ hopes up if things weren’t okay. I was going to tell him.
Louis walking up: What were you going to tell me?
Beatrice: About her wonderful idea, Louis.
Blair: I have so many.
Dan: Mm.

Gossip Girl: Spotted: Chuck on the wrong side of town. Looks like Bassman doesn’t have enough of a dark side. He has to take a walk on one too.

Dan: Hey! I’m not part of his payment plan.
Chuck: Sorry. Mr. Bass said nothing should stop us except his safe word.
Dan: Well his is serious. He could die.
Chuck: All this be madness, yet there is some method in it. {he gets kicked again} Guess that wasn’t the safe word.
Dan: Chuck. Chuck. Tell them to stop.
Chuck: Okay. Fine. “Stop.” {they take off}
Dan: Stop? Really? That’s it?

Chuck: I wasn’t trying to kill myself.
Dan: Then what the hell were you doing?
Chuck: I was hoping it would hurt.
Dan: What, to dull the pain of losing Blair?
Chuck: That’s what you don’t understand. I feel nothing when I see her and Louis. Or when I jump off a building or when I crash a motorcycle. Even you don’t irritate me.
Dan: Well having these guys beat you up isn’t the way to fix anything. You could have died.
Chuck: Is being dead that much worse than being nothing?

Diana (Liz Hurley): Once you know how to control information you can do anything with it. Politics, banking. Whatever.
Nate: While that sounds great, I would have to get my family to approve me pulling out on this other thing.
Diana: Well just remind them what George did for JFK, Jr. See you at the office next week.

Gossip Girl: Watch out, Nate. Looks like sex play may not be the only game you’re a pawn in.

Dan: Well how about instead of pain you try to feel good things. I could tickle you.
Chuck: I’d rather hire someone else to do that, thank you.

Chuck: Forgive me for stating the obvious, but isn’t being published a writer’s goal?
Dan: Not for this book. It’s a scathing social satire. About everyone I know, including you.
Chuck: The return of Charlie Trout.

Chuck: Well just because I can’t feel anything shouldn’t mean everyone else should have to endure humiliation. I’ll help you.

Gossip Girl: How well do any of us really know each other? Even families have their secrets.

Beatrice: I just have to find another way to get Louis out of Monaco for good. So my mother will finally see that I was the right choice all along.
Father Cavalia (Marc Menard): Vengeance becomes you.

Gossip Girl: They say blood is thicker than water. But it’s also a lot harder to clean up when it spills.

Dan: If I didn’t know any better, I’d think you’re starting to like Brooklyn.
Blair: It isn’t Brooklyn I’m here for. You’re the only person I can have a furtive, emotionally-loaded conversation with right now. How’s Chuck?
Dan: Ah… he’s okay. Sort of. A long, Freudian story. How are you?
Blair: Pregnant. That makes it sound more real. I had hoped denial would last longer as a coping mechanism, but breast tenderness and morning sickness made that impossible.
Dan: You know, you do have options.
Blair: And I’ve considered them all. But no matter what, this baby was conceived out of love and… I’m gonna keep it.

Dan: Um, have you not told Louis because it might be Chuck’s?

Dan: Even Blair Waldorf can not bend DNA to her will.

Blair: I am about to marry a fabulous man. Who happens to be a prince. I can’t be this close to having all my dreams come true only to have them yanked away by one transgression at a stranger’s Bar Mitzvah.
Dan: I know it’s scary, but I think you should know who the father is. If not for yourself then for the baby.
Blair: And what if I lose everything?
Dan: You’ll still have me.

Gossip Girl: Maybe it’s not blood bonds that make us a family. Perhaps it’s the people that know us and love us anyway. So we can finally be ourselves. XOXO —Gossip Girl.