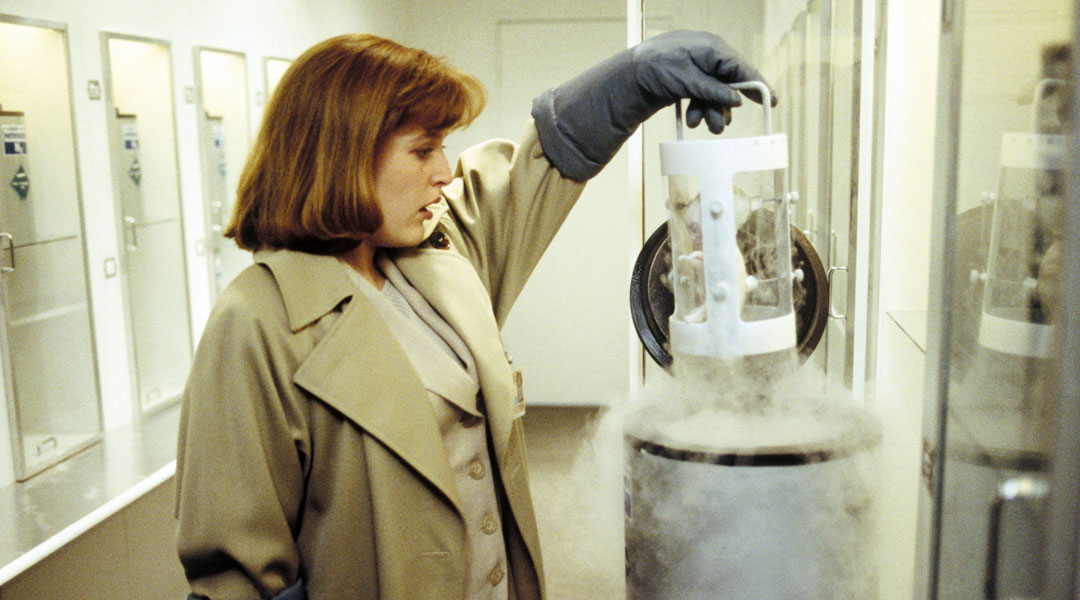 Scully: We’re out here on half-a-hunch, off of a cryptic phone call, chasing down a clue that’s based on nothing but speculation.
Mulder: That’s all we’ve got.
Scully: That’s all he’s given us. Who is this Deep Throat character? I mean, we don’t know anything about him. What his name is, what he does.
Mulder: He’s in a delicate position. He has access to information. An indiscretion could expose him.
Scully: You don’t know that this isn’t just a game with him. He’s toying with you. Rationing out the facts.
Mulder: Do you think he does it because he gets off on it?
Scully: No. I think he does it because you do.

Deep Throat (Jerry Hardin): Calling it a night, Mr. Mulder?
Mulder: My mother usually likes me home before the streetlights come on.

Deep Throat: Don’t give up on this one. Trust me, you’ve never been closer.
Mulder: Closer to what?

Scully: I’m sorry, Mulder. I’m seeing the pieces but I’m not seeing the connection.
Mulder: Well, maybe that’s just it. Maybe we’re not seeing it because it can’t be seen. Not in any obvious way. {shows her the Purity Control flask} What do you think this is?
Scully: I don’t know.
Mulder: Can you find out for me?
Scully: What are you going to do?
Mulder: See what else I can find out about Terrance Allen Berube.
Scully: Okay Mulder. But I’m warning you. If this is monkey pee, you’re on your own.

Scully: I’ve got something for you.
Mulder: Is it smaller than a silver Sierra?
Scully: Much. And it’s not silver. It’s green.
Mulder: What is it?
Scully: Some kind of bacteria. Each containing virus. And it looks like Berube may have been cloning them.

Dr. Carpenter (Anne De Salvo): Only four nucleotides exist in nature. Four. And through some design that we have yet to fathom, every living thing is created out of these four basic building blocks. What you’re looking at is a sequence of genes from the bacteria sample. Normally, we find no gaps in a sequence. But with these bacteria we do.
Scully: And why is that?
Dr. Carpenter: I don’t know why, but I tell you, under any other circumstances my first call would have been to the government.
Scully: What exactly did you find?
Dr. Carpenter: A fifth and sixth DNA nucleotide. A new base pair.
Agent Scully, what you are looking at exists nowhere in nature. It would have to be, by definition, extraterrestrial.

Scully: Mulder, I just want to say that I was wrong.
Mulder: That’s all right. Don’t worry about it.
Scully: No. If you had listened to me we wouldn’t be here right now. I should know by now to trust your instincts.
Mulder: Why? Nobody else does.

Scully: You know, I’ve always held science as sacred. I’ve always put my trust in the accepted facts. What I saw last night… for the first time in my life I don’t know what to believe.
Mulder: Well whatever it is you do believe, Scully, when you walk into that room nothing sacred will hold.

Deep Throat: There are limits to my knowledge, Mr. Mulder. Inside the intelligence community there are so-called “black organizations”. Groups within groups, conducting covert activities unknown to the higher levels of power.

Deep Throat: You must put together everything that you have found and you must find Dr. Secare before they do. I’ll have no further contact with you on this matter.

Assassin: Your cellular phone’s been ringing off the hook.
Mulder: I’m a popular guy. Why don’t you answer it for me?
Assassin: I don’t like talking on the phone. I have this thing about unsecured lines. When you feel like talking, let me know though.

Deep Throat: I’ll take the parcel.
Scully: No sir. I’ll make the exchange.
Deep Throat: I made the deal, Scully. They’re expecting me.
Scully: I don’t trust you.
Deep Throat: You’ve got no one else to trust.
Scully: I don’t know who you are. I know nothing about you.
Deep Throat: Oh for gods sake, don’t screw this up! Let me tell you something you should know. In 1987 a group of children from a Southern state were given what their parents thought was a routine innoculation. What they were injected with was a cloned DNA from the contents of that package you’re holding as a test. That’s the kind of people you’re dealing with.
Scully: So why give it back to them?
Deep Throat: To save Mulder’s life.
Scully: At the risk of so many other’s lives?
Deep Throat: Tip of the iceberg. You and Mulder are the only ones who can bring it to light. Now give me the parcel. {the van pulls up.} Give me the parcel, Scully.

Deep Throat: Trust…. Trust no one.