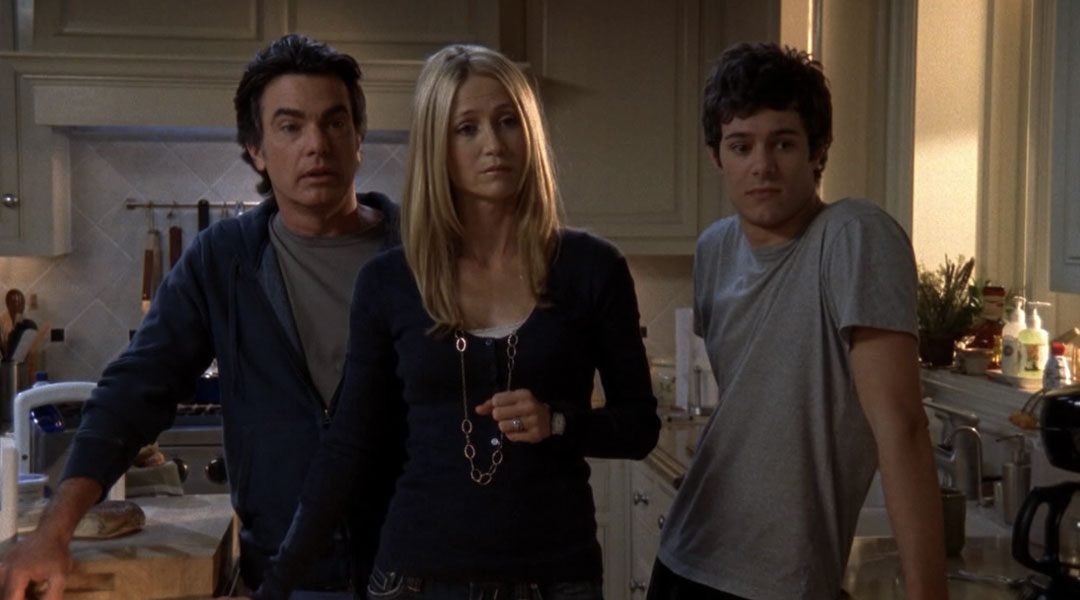 Seth: Bollywood, huh? I didn’t know you were such a world cinema buff. Especially at 2:30 in the morning.
Ryan: What are you doing up?
Seth: I had a dream. Summer was marrying Ralph Nader and I was playing the marimba at the wedding.
Ryan: Good gig.

Seth: What are they dancing about?
Ryan: This guy just saw his girlfriend’s ankle.
Seth: Hm.

Julie: Oh my god. Wake up.
“Hans”: What are you doing?
Julie: It’s almost 8 o’clock. You have to get out of here before my daughter wakes up.
“Hans”: Noch zehn minuten. (Ten more minutes).
Julie kicking him out of bed: Schnell!

Kaitlin (Willa Holland): Are you my new daddy?
“Hans“: Oh. Good morning. I’m your mom’s personal trainer. We were just doing an early morning workout.
Kaitlin: Really? And how much do you charge for that?

Taylor: You might want to sit down. I have huge news and a favor to ask you.
Seth: You like Ryan and you want my help convincing him to date you?
Taylor: Wow.
Seth: You said he was funny. It’s kind of a giveaway.
Taylor: I know, it’s crazy. I mean, I’ve always thought, Cute guy. Might be good for a night of rough and tumble fun, but it’s not like we have anything in common.
Seth: So ignore it. It’s probably just gas.
Taylor: But then when he helped me with my husband and he kissed me it was… like Dorothy landing in Oz. Everything just popped into technicolor.

Sandy: I’m playing golf tomorrow with Gordon Bullitt.
Kirsten: The oil tycoon? Didn’t he go to jail for tax evasion?
Sandy: Yeah. But he’s out now. I had dinner with him last month. He’s really not a bad guy for being  a total pig.

Summer: Did you find out what they were doing with them?
Ché (Chris Pratt): Huh. It doesn’t matter. If it wasn’t evil they wouldn’t have to keep them locked up in cages like animals.

Bullitt teeing off: Look at that. Shi’ite Muslim!

Seth: I was into recycling way before it was cool. Al Gore, he got half of that stuff from a paper I wrote in sixth grade. I just don’t, you know, make a stink ’cause he’s doing good work.

Summer: Che—
Ché: I got the call too. That scientist picked us out on Facebook. Apparently the chiseled features of freedom? Not that hard to recognize.

Julie on the phone with Kirsten: So, what, Sandy just served me up like a piece of meat? […] How rich is he? […] Five o’clock will be fine.

Taylor: Would you like to dance?
Ryan: Actually I’m not much of a dancer. That’s probably shocking.

Ryan: We did not hate you.
Taylor: Oh, you totally hated me. Come on, you were probably the president of the “I Hate Taylor” Club.
Ryan: I was the secretary. I took the notes.
Taylor: Ryan! You made a real joke.

Seth: I saw you dancing with Taylor.
Ryan: Yeah. Is that look supposed to mean something?
Seth: Crazier things have happened. Not that I can recall this instant, but—
Ryan: Okay, I don’t think so.
Seth: Ask yourself why. She’s smart, she’s funny.
Ryan: Dude, just forget about it, okay? I’m not gonna date Taylor.

Ryan: Taylor! Taylor! Woah woah woah, hold on. Let me explain.
Taylor: Oh, I think you were pretty clear, Ryan. And yes, I lied when you asked me if I liked you. But… What was I even thinking? I mean, you and me, I must be totally crazy.
Ryan: You’re not crazy, okay?
Taylor: Ryan, I pretended to be a sleep therapist to seduce you.
Ryan: Well that was crazy.
Taylor: Don’t worry, because next week I’m sure I’ll be totally obsessed with some guy who gives me change for parking.
Ryan: Look, what I said has absolutely nothing to do with you, okay? It’s just…
Taylor: What? That for the longest time all you could feel was your desire to kill Volchok, now that’s gone so you feel empty, can’t feel anything—least of all, anything for me.
Ryan: How do you keep doing that?
Taylor: Doing what?
Ryan: That. You keep telling me what I’m thinking before I feel it.
Taylor: Because I think about you. You know I want you to be happy, and I think that if you gave it a chance you might feel something too.
Ryan: Taylor—
Taylor: Are you going to tell me that you really like me as a friend?
Ryan: Maybe. she storms off. How does she do that?

Ché: Summer, have I accomplished anything this semester?
Summer: Are you kidding? Che, there would be no political activism at Brown without you. Oh my god, are you getting kicked out?
Ché: No. But I think you might be.
Summer: What?
Ché: Yeah, they needed a scapegoat. You said yourself that I’m too important to the movement, so…

Sandy: Hey, how’d it go with The Bullitt?
Kirsten: Well, as it turns out Julie was dating his 25 year-old son.
Sandy: Oo. That’s a weird coincidence.
Kirsten: That about sums it up.

Taylor: Are you seriously trying to Jedi mind trick me?