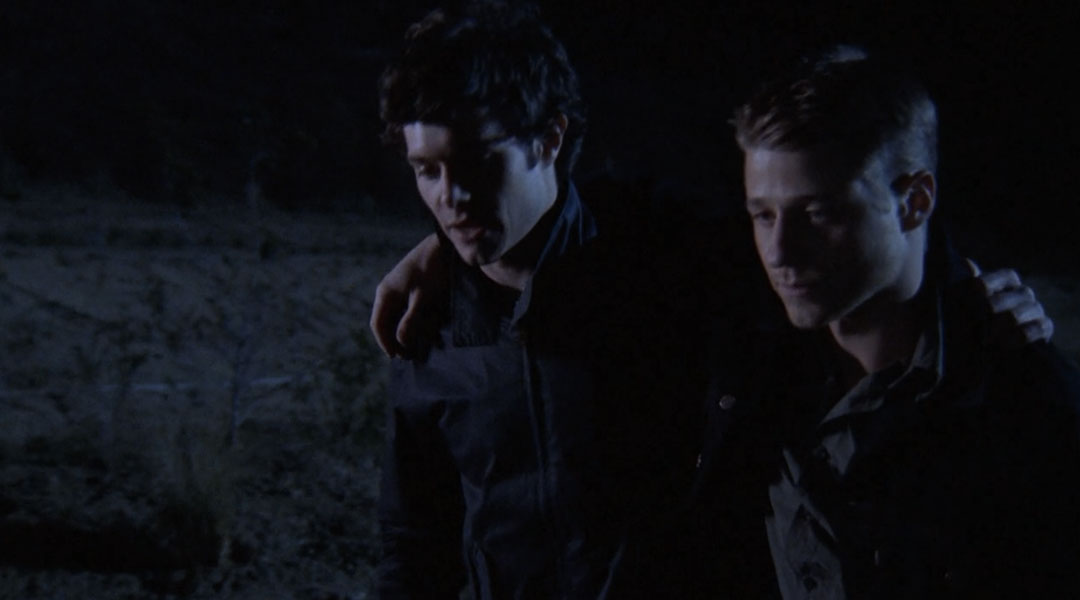 Summer: Not that I don’t want to play Pictionary by candlelight and raid Taylor’s apocalypse kit. I think we should just go to your house.
Seth: Okay. But I’m still awaiting news on Pancakes.

Kaitlin (Willa Holland): Look, I understand why you keep on calling Summer and the Cohens, but why Frank? I mean weren’t you guys supposed to take it down a notch?
Julie: Kaitlin, just because we’re pulling things back a little bit doesn’t mean that we’ve stopped caring about each other.

Julie: I’m thinking the roof. Or… where the roof used to be. Ice Cream Guy, you got a ladder?
Gary (Aaron Fors): You can’t climb up there.
Julie: I’m not going to. You are.

Taylor: This is my personal safety device. It’s a flashlight, it’s a radio, it’s a cellphone charger, it’s a siren and… it’s a compass. {looking at it} Hm. North is that way.
Ryan: Handy.
Taylor: I’ve also got canned goods, batteries, water… ooo! A gas mask and…that’s right, North Korean currency. Because you just never know.

Taylor: I know my mom is a total bitch, but she’s still my mom. And she doesn’t drink a lot of milk so her bones are probably very brittle. And she’s been scared of the dark.

Kirsten: This is like Berkeley 1989.
Sandy: You say that so warmly.
Kirsten: Not that I’m fond of natural disasters, but there is nothing sexier than your husband calming an angry mob.
Sandy: Are you okay?
Kirsten: I know I’ve been complaining about Newport a lot but it breaks my heart to see it that way.

Gary: We’re on an island, all alone.
Kaitlin: Look, we appreciate the imagery and all that, but this is no time for existential metaphors.
Gary: No, really. The pier’s been washed out.

Ryan: Seth, the hospital is like a mile away.
Seth: I know. Which is why I’m taking the secret back roads way that’s only a half mile. That was sarcasm. I’m pretty sure my shortcut got us lost.
Ryan: Well, the ocean’s on one side, the land’s on the other. I’m sure you’ll figure it out. That was sarcasm too. Sorry.
Seth: No, hey. So you’re a little on edge. A giant glass spear in the back will do that to a guy.
Ryan: It’s not a spear.
Seth: What is it, a— more of a spike, or a skewer?
Ryan: Dude, you’re doing a terrible job of trying to keep my mind off the pain. You’re supposed to talk about something else. Not the thing causing the pain.
Seth: True. But what are you doing to keep my mind off of your pain, ’cause right now you’re not looking too good, I’m starting to feel— What was that?
Ryan: It sounds like we hit something.
Seth: Oh god, not a body.
Ryan: Alright, well pull over or something. Go check.
Seth: With the zombies?

Julie: I used to sing that to Kaitlin when she was little. And scared.
Gary: Isn’t that kinda inappropriate? I mean, given the sexual content of the lyrics?
Kaitlin: Well, it was the only song she knew all the words to.
Julie: That and Pour Some Sugar on Me.

Seth: Ryan, you’re asking me to use tools and exert myself physically. I think we both know where this is going.

Seth: Um, you may find this hard to believe, Ryan, but when I was younger I used to be a bit of a worrier.
Ryan: You don’t say.
Seth: To distract myself from worrying, I would sometimes make lists. Um, it didn’t matter what the lists were—it could be anything. Every cereal I’ve ever eaten, or the names of every planet mentioned in Star Wars.
Ryan: You want to make a list, Seth?
Seth: Huh? Oh, you know, whatever. I mean sure, if you want to. We could start with everyone you’ve ever punched in the face since you moved to Newport. The first would be Luke at Holly’s beach house.
Ryan: Yeah, and number two would be Luke.
Seth: Right. At the diner.
Ryan: Yeah. And again at the model home.
Seth: What about Holly’s dad at Cotillion?
Ryan: That was more of a tackle.
Seth: Which takes us back to Luke.
Ryan: Yeah. At TJ.

Taylor: Summer, do you really think Pancakes is in the attic? Like, he pulled down the ladder, hopped up and then put it away?
Summer: Well we have checked everywhere else.

Summer: You know, if there’s one thing I’ve learned over the years it’s you make your own family. It seems to me you’ve scraped together quite an awesome one.

Seth: So listen, I’m gonna go on foot and get help I think.
Ryan: No no no.
Seth: Well we can’t stay here. I don’t even know where here is.
Ryan: I’m going with you.
Seth: No, it’s cool. Listen, I’m gonna come back as soon as I can. I promise.
Ryan: What about the zombies?
Seth: That’s a really good point.

Seth: Alright buddy. We have to keep you alert and on your feet. Now, when last we checked the list—need some help—we were on Trey. Now correct me if I’m wrong, but I believe we went from Trey to a lengthy Volchok period.
Ryan: Yeah. Hey, thanks for this.
Seth: Yeah. Now unless you hit that Chili guy. Or Johnny. I know a lot of people were rooting for that.
Ryan: Well I did punch Johnny’s dad. Or a bounty hunter who worked for him.
Seth: Johnny’s dad was a bounty hunter?
Ryan: Oh yeah. I never told you that?

Sandy: Excuse me, doctor. My wife would never complain. She would never put her needs in front of anybody else’s, but I am not that proud. I am not that selfless. I am begging you please please to give her and our baby priority.
Doctor: I’d like to help really, but—
Richard White: You can have my spot.
Overhead Page: Richard White.
Richard: That’s me. Go.
Sandy: Thank you.

Taylor: Summer, how can we keep looking for Pancakes when there’s a giant elephant in the room.
Summer: We walk around the elephant. It may be big but we are crafty.
Taylor: The boys should have been back over an hour ago. Aren’t you worried?
Summer: No, I’m not worried. I’m freaking terrified, okay? That’s why I’m focusing on just finding Pancakes and not about the the fact that my boyfriend could be laying on the side of the road ravaged by zombies.

Seth: Okay, I’ve always wondered this. In your opinion who is a better food industry server? Chloe, the magical waitress from Albuquerque. Or Donnie, the angry busboy who shot Luke?
Ryan: Gotta go with Chloe on that one.
Seth: Good. That’s what I figured. Okay. Desert island. Sadie the tough-as-nails yet soulful jewelry maker or Lindsay my grandfather’s illegitimate bookish lovechild?
Ryan: I can’t, Seth.
Seth: Sure you can. It’s very easy.

Summer: Ew. I am not touching your pistol! It’s stupid and dangerous and— {there’s a noise downstairs} Go 187 on that zombie ass.

Veronica Townsend: I’m not holding the rabbit. Unless you promise I can make a vest out of him.
Summer: I’ll carry Pancakes.

Taylor: Mom I’m really sorry I shot you. I know we don’t always get along but… I love you.
Veronica: I love you too.

Veronica: I was shot because I was a total failure as a mother. It never even occurred to you that I would come looking for you.
Taylor: But you did.

Seth: The doctors say you’re going to be fine. Although you’re going to have to wrap your head around the fact that we’re really brothers now. Or… blood brothers.
Ryan: You donated blood.
Seth: Eh. I had an extra few pints flowing through my veins. It was no big deal.
Ryan: You’re not a big fan of needles.
Seth: Nor of fainting, it turns out. But the bank was a little low and us O Negative guys gotta stick together.
Ryan: Hm. That’s weird because all the sudden I have this strange urge to listen to Death Cab and read comic books.
Seth: For real?
Ryan: No.
Seth: Ah, that’s too bad. Because if we could’ve turned this into a body swap comedy we could’ve squeezed another year or two out of this.
Ryan: So listen, I don’t know if I said this today, but—
Seth: You did. But after all the times you saved me, I was up. So…