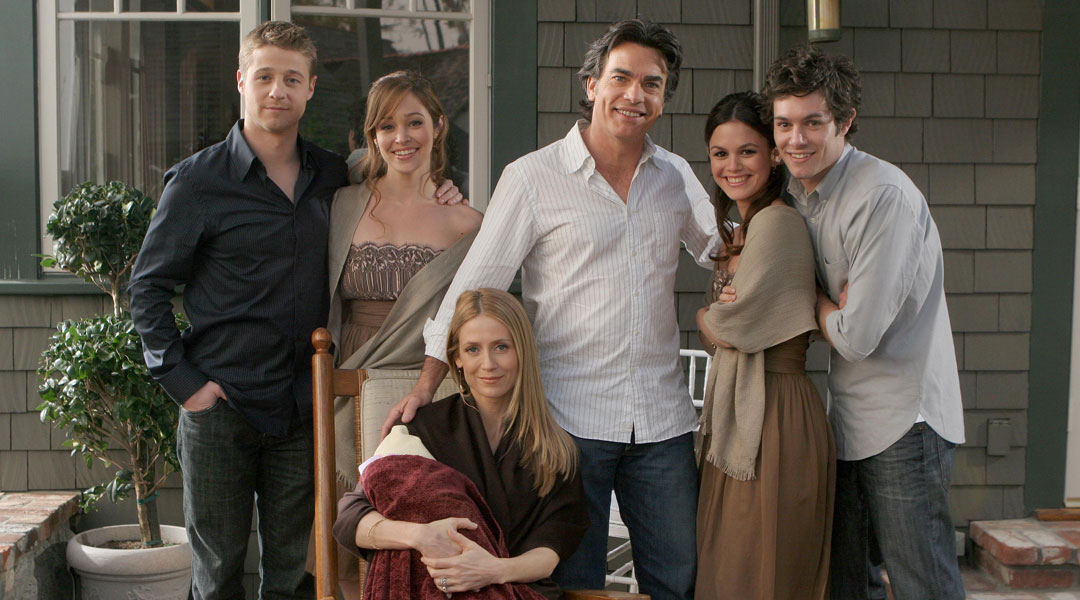 Ryan: We’ve all had to make adjustments since the earthquake.
Kirsten: Especially Kaitlin. [With] the entire Cohen family taking refuge here.
Kaitlin (Willa Holland): It’s been nice. I mean, I’ve perfected my Sandy Cohen. Listen to this: “I shmeared it for ya.”
Sandy: Well, you know… not bad. I am very sexy.
Julie walking in: Baby, stop mimicking Sandy.
Sandy: Julie! Crepe? I am too nauseous to eat. Morning sickness? Or wedding jitters. Who can tell.
Kaitlin: Well your fiancé is certainly excited about the nuptials.
Julie: Yeah, he’s become a broken record. He keeps saying—
Bullitt (Gary Grubbs): Bang!

Sandy: I know you don’t like to leave your lair, but the inspector’s coming to the house today. I think everybody should be there.
Seth: This chair is my home now.

Inspector: The cost of repairing the damage is more than the value of this house. I’m sorry, but there’s no saving your home.

Kaitlin: I can’t believe Bullitt’s got twelve sons.
Spencer: One from every oil refinery in Texas.

Seth: I thought I had them with the hands in the cement.
Ryan: Me too.

Summer: Oh! Real life Jake broke up with real life April!
Taylor: What are you doing?
Summer: I told Seth that I wouldn’t watch “Briefcase or No Briefcase” until he got home. So I’m reading about The Valley.
Taylor: Oh my god, that show’s still on?
Summer: It just got picked up for five more seasons. You know these teen dramas just run forever.

Bullitt: Drop that pen, Amigo. I’m kidnapping the both of you. C’mon, the jet is gassed up.
Kirsten: Is he drunk?
Bullitt: No! Your boys called. They’re up in Berkeley tryin’ to buy back the old homestead. Just need you two up there to seal the deal. I figured the least I could do is lend my jet since old Sanford here introduced me to my lady love.
Kirsten: I can’t fly. I’m nine months pregnant.
Bullitt: Well my son, Amarillo, he’s waiting at the plane. He’s one of those doctors for women’s private parts. C’mon, sunshine’s burning. Let’s go!
Realtor: Not to pressure you, but the owners are expecting other offers.
Bullitt: Oh, what the hell, Blondie. I’ll buy this house. grabs pen and signs Here. And here. to Kirsten and Sandy. Andalay!

From the the flyer
The Devil Bullitt: It’s all about the Benjamins, Fuzzy Butt!

Kaitlin: I mean I love Bullitt, but one’s kind of enough, you know.
Julie: You’re telling me.
Kaitlin: What are you talking about? You’re about to spawn off the latest.
Julie: Maybe he won’t be all that Bullitt-esque.
Kaitlin: Don’t count on it. He’s probably going to come out with a cowboy hat and tell the doctor, “bang.”
Julie: Or a wife beater.

Sandy: Is there any chance we could see the kitchen? Just to see if the Seth Cohen growth chart is still notched in the wall?
Patrick (Jim Pirri): It isn’t. We thought it was termites.

Todd: Okay, this isn’t the bathroom.
Kirsten: I’m sorry. I didn’t make it. My water broke.
Sandy: Seth! Call an ambulance!
Kirsten: No time for an ambulance.
Patrick: Okay, this is so random, but I’m actually a midwife.
Kirsten: Good. ‘Cause this baby’s coming now.

Sandy: Sophie Rose Cohen. It’s got a nice ring to it.

Seth: If I look as good as you in 20 years I’ll be a happy man.
Sandy to Seth: Well thanks, but I’d like to see you happy now. For the last couple of months you’ve landed in a rut. At least a La-Z-Boy.

Seth: I’m not so sure that being with Summer is bringing out the best in either one of us right now. But I’m afraid to let her go, so…
Sandy: Well, things have a way of coming back around.

Summer: Do you think that Seth and I are making a mistake? Living together after the earthquake and then getting an apartment together next year in Providence?
Julie: Um, well, you know I got married so young that I never had a chance to find out who I was or what I cared about. I mean, I never went to college or learned any real skills. And now here I am, twenty years later. Still knocked up on my wedding day. Summer, you’re a great girl. And the world deserves to know you. You deserve it too. Don’t settle for comfortable.

Taylor: Why are you in Berkeley?
Ryan: Long story, but trying to get the Cohens their old house back.
Taylor: The Cohens are moving to Berkeley?
Ryan: If things work out.
Taylor: So, that would mean you wouldn’t be coming back to Newport for Christmas or summer or… ever.

Julie: I can’t get married without Kiki. She’s my best friend. I’m sorry, but I’m not doing it without her.
Cut to Berkeley and the entire wedding outside of Patrick & Todd’s
Patrick & Todd: Oh my god.
Bullitt: One of you two wouldn’t happen to be a wedding planner, would you?
Todd: Actually.

Todd: Okay… What is it with you people?

Bullitt about Julie: That woman is like nailing jello to the wall.

Kaitlin: Our kitchen is going to be so empty.
Julie: I know. I was kind of getting used to becoming a Cohen.
Kaitlin: My Sandy impression was killer.

Ryan: Alright Roberts. I’ll see you.
Summer: Alright, Atwood.
Ryan: And thank you so much for Flapjacks. I promise I’ll raise him right.
Summer: Don’t forget to clean his cage. Which should not be used for cage fights.

Seth: I’ve been doing some checking up on your new roommate. His favorite book and movie are the Da Vinci Code. He’s no me.
Ryan: You say that like it’s a bad thing.
Seth: At least I leave you funnier than when I found you.
Ryan: A lot better off than when you found me.
Seth: Me too.