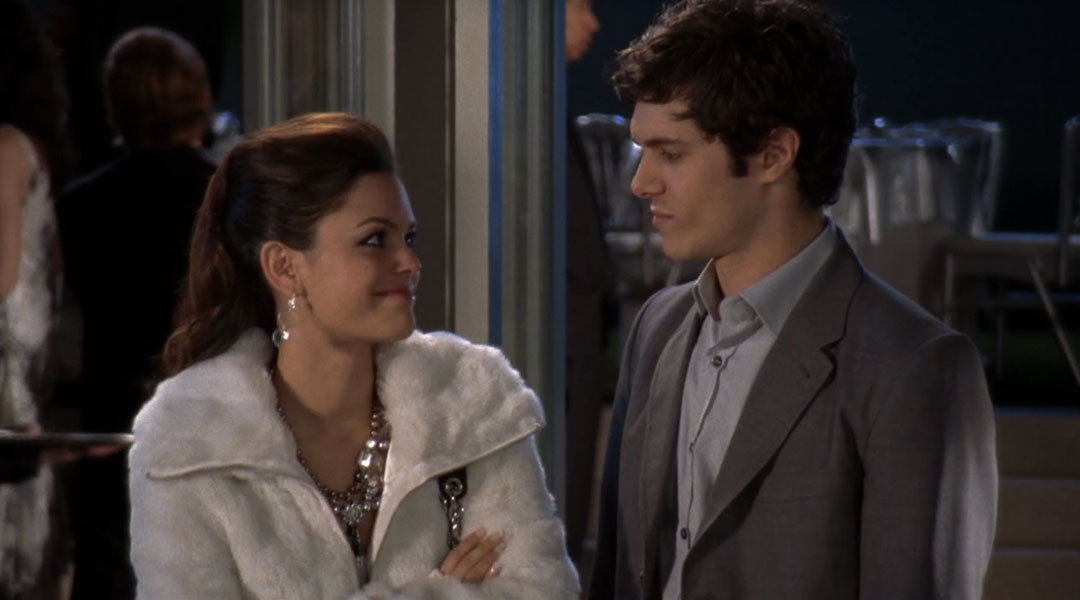 Sandy: Kirsten.
Summer: What happened?
Kirsten: Taylor and Ryan, they were hanging decorations and I guess the ladder fell.
Seth: What did the doctor say?
Kirsten: Well, they said apparently there’s no serious injury. We just have to wait for them wake up.

Taylor: Ryan? Is that you?
Ryan: Taylor? You know me?
Taylor: Oh my god. I found you.

Ryan: How do you know this?
Taylor: Oh, tenth grade I had a little sci-fi phase. Alt-universes are huge. Clearly, you and I have entered a world where we don’t exist. But don’t despair, I know the way back to the real world.
Ryan: Yeah? Does it involve me dating you?
Taylor: Well well. Look who’s funny in alt-world.

Taylor: Alt-Summer is a mindless bimbo.

Summer: Well somebody should find Taylor’s mom. I guess I’ll do that.
Seth: Look at you signing up for the suicide mission.

Taylor: finding out about Julie and Chester. Alt-yoinks! seeing them together: Double alt-yoinks! realizing Marissa may still be alive: Triple alt-yoinks.

Taylor: Even if Marissa is fine in this world—which, thank god, she is—we need to focus on fixing what is broken. Because that’s what’s gonna get us back to the real world.
Ryan: But if she’s alive…
Taylor: Then you don’t want to go back.

Julie: Oh, now honey I told you my family only drinks wine coolers.
Kaitlin (Willa Holland): We’re having a very Britney Christmas, Mother.
Julie: Yes. Watch out. I might put you on my lap while we drive out there.

Kaitlin: You know, I really don’t think that Veronica’s going to care if Taylor’s in a bogus coma.
Julie: Well it doesn’t matter. Her daughter’s in the hospital and she needs to know.

Alt-Kaitlin: [Marissa] died three years ago.
Ryan: What?
Alt-Kaitlin: She OD’ed in an alleyway in Tijuana. Wow, that’s really the way I want to start my Christmas vacation. Wait, who are you again?
Ryan: No one.

Ryan: Has anyone ever said no to you?
Taylor: Once. And I pushed him off a roof. Kidding.

Sandy: An alternate universe?
Seth: It’s the only obvious explanation.
Sandy: “Obvious” might not be the word I would use.
Seth: They both got knocked out at the same time and neither is waking up.
Sandy: Like Dorothy in Oz.
Seth: And just like Dorothy had to go see the Wizard, they’ve got some mission to accomplish before they can return.
Sandy: Like what?
Seth: Ah, anything. Could be like our world, only messed up. They’ve got to reset the balance. Or could be a world ruled by giant vegetables and they’ve got to topple the vegetable despot before they can come back.
Sandy: You had me ’til vegetable despot.
Seth: It makes perfect sense.

Alt-Seth: I already told you, I’m not going to your stupid party.
Alt-Kirsten: Because Summer Roberts is going to be here? Since when are you avoiding her?
Alt-Seth: Since she got engaged to that burly ding dong.

Alt-Veronica to Alt-Taylor: Taylor, what are you doing? I told you not to wear that suit. Your ass looks like the back of a truck.
Taylor to herself: Oh my god. In alt-world I’m a boy.

Julie: Veronica, listen. I know you’re not the warm and fuzzy type. But it is Christmas Eve and it would mean so much if you could be there. And if you get on that plane right now I’ll tell security you have a bomb.
Kaitlin: Wow. Very Jack Bauer of you.

Alt-Seth: Oh, hate my life I hate my liiiiiiife! I hate my life!
Ryan: Yeah. No wonder Summer doesn’t like you.
Alt-Seth: See, even you think so. And no offense, but it’s kinda weird, you having such a vested interest in my love life considering I just met you this morning.
Ryan: Alright, you want the truth? Huh?
Alt-Seth: I know the truth.
Ryan: You know the truth?
Alt-Seth: Yeah.
Ryan: I’m from an alternate universe where your dad adopted me and you and Summer are in love. And unless I fix things here—which means getting your parents and you and Summer together—I can’t go home.
Alt-Seth: I always knew this would happen.
Ryan: Doesn’t surprise me.

Ryan: There’s some guy who wants to meet you in the master bathroom. Something about getting a thong off.
Alt-Julie: Oh! Oh. That’s charity talk. Thong is an acronym for The Homeless of Newport… Go. Or something.

Alt-Sandy: So? Are you gonna explain yourself?
Ryan: The truth is things the way they are now are completely wrong.
Alt-Summer: Who’s this random guy we’re all listening to and why am I not drunk yet?
Ryan: Okay, look, none of you know me. But the truth is that each of you saved my life just by being who you are. And right now none of you are who you are. Like Summer, for example. What are you doing? I mean Che, Chester? He’s completely wrong for you. You should be with Seth. Kirsten. You don’t want to run the Newport Group. That place makes you miserable. And you may like your Chardonnay, but I got news for: it doesn’t like you back. And Sandy, you don’t want to be mayor. You’re all about saving the little guy, not holing up in some mansion giving orders. What you two are best at is being married to each other.

Jailer: Atwood. There’s someone here to bail you out.
Ryan: Thanks.
Alt-Sandy: I don’t know who you are, but a lot of what you said back at the house made sense. So why do you care so much about getting a bunch of strangers back together?
Ryan: Well, I guess I thought it would get me back home too but I was wrong. Can I ask what happened? How’d your family fall apart?
Alt-Sandy: You know I think it all goes back to when Marissa Cooper died three years ago. She was Jimmy and Julie Cooper’s daughter.
Ryan: I knew Marissa.
Alt-Sandy: Well when she died, it was like everybody got stuck.
Ryan: Didn’t know how to say goodbye.
Alt-Sandy: Maybe you’re right. What are you doing for dinner? How ’bout you come over to the house?
Ryan: There’s some place I’ve gotta go. Thanks.
Alt-Sandy: You’re welcome.

Kaitlin: Between you and me, Taylor in a coma is kind of a nice break.