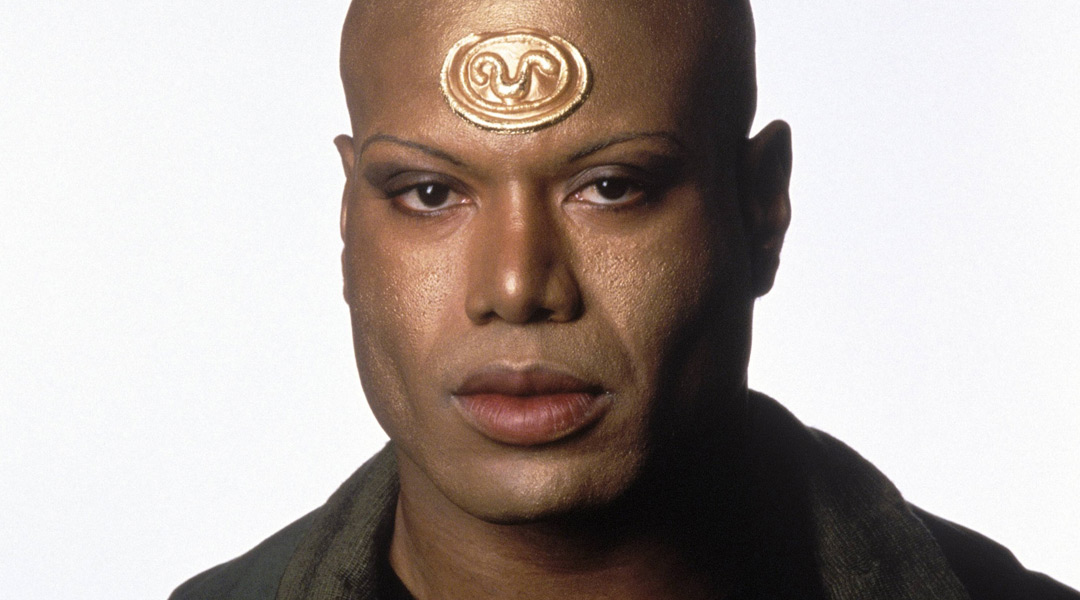 O’Neill: All right, take it easy Daniel. We’ve been in worse situations than this.
Teal’c: Not to my knowledge.
O’Neill: Thanks Teal’c.

Bra’tac: You should not have come.
Teal’c: I stand by my friends. I believe this world may be our only hope of one day overcoming the false gods.
Bra’tac: Yes. As pathetic as that may seem at the moment… I agree.

Carter: It’s gonna be a beautiful sunset, sir.
O’Neill: You know, Captain. This wasn’t such a bad day after all.
Carter: Not bad at all.
Bra’tac: We die well, Teal’c.
Teal’c: More than that, old friend. We die free.
O’Neill: Or not.

In the Line of Duty

Teal’c: Colonel O’Neill. When you speak to her. Do not see your friend.

Carter: Not all Goa’uld are the same. There are a few that oppose the System Lords and their ways. You must have heard of the Tok’ra.
Teal’c: Every Goa’uld seeks power for his own reason and would betray his own brother to achieve it.
Carter: Some seek power for a greater purpose. Not Goa’uld is an enemy to the people of this planet. The Tok’ra are real. No matter what Apophis has told you.
Teal’c: I have yet to meet one.
Carter: You have now. I am Jolinar of Malk-shur.

Teal’c: There is an old legend among the Jaffa, forbidden to speak of, concerning a group of Goa’uld who oppose the ways of the System Lords. This group is called the Tok’ra.

The Keeper: We cannot leave our chambers. The world outside is uninhabitable. It has been poisoned and desecrated.
Teal’c: You are mistaken. Your planet is a fertile garden world.
The Keeper: It is you who are mistaken, my alien friend. Our planet was destroyed by a chemical disaster one thousand and twenty-two years ago.

Hammond: This is not our world. Is it really any of our concern?
Teal’c: The destruction of the hammer device to save my life may have caused this. If so, I am responsible.
O’Neill: General. I gave the order.
Jackson: I fired the staff at the machine.
Carter: And I… was there.

Teal’c: Things will not calm down, Daniel Jackson. They will, in fact, calm up.

Message in a Bottle

Carter: You think it might be a booby trap?
Teal’c: Booby?

O’Neill: Teal’c you don’t have to stick around.
Teal’c: Undomesticated equines could not remove me.
O’Neill: Wild horses, Teal’c. It’s… That’s a joke. You told a joke.

Bra’tac: Greetings, old friend. I bring bad news.
Teal’c: My family.
Bra’tac: Your wife is safe.
Teal’c: What of Rya’c?
Bra’tac: Your son has been taken. By Apophis.

Teal’c: I am not dead.
Bra’tac: In your current situation you may as well be.

Drey’auc: What happened? Where is my son?
O’Neill: He’s alright. We just ran into some problems.
Teal’c: It is far worse than that, O’Neill. Ry’ac’s body lives but his heart and mind have been destroyed.
Drey’auc: What are you saying?
Teal’c: He is now with Apophis.
Bra’tac: The boy was a stranger. A beast.
O’Neill: Oh come on. The kid’s brainwashed.

Teal’c: As long as the Goau’ld within her sleeps, Sha’re shares its memories.
Jackson: So? So what?
Teal’c: It would be of great strategic benefit to have access to the Goau’ld genetic memory even for a few days.
Jackson: What? Access? Do you know who it is we’re talking about?
Teal’c: I do. And soon she will give birth.
Jackson: Well hasn’t she gone through enough? I mean, what are you talking about here, Teal’c? Handing her over to Maplewood for study?
Teal’c: The knowledge she possesses could one day save your world.
Jackson: I don’t care! I will not put her through that too. I’m sorry.
Teal’c: More sorry for yourself it appears than for Sha’re. Within a matter of days, Sha’re will give birth. The Goau’ld within her will be awakened. Apophis will take his child and leave Abydos forever. That is the fate you choose for Sha’re by allowing her to stay!

O’Neill: You alright?
Jackson: No. No I’m not. But I will be.
Teal’c: She looked directly at us, Daniel Jackson. Yet she did not reveal our position.
O’Neill: Let’s go home.

Fraiser: Teal’c, shouldn’t your larval goa’uld be helping?
Teal’c: That is correct. But it is not. It is, in fact, getting worse.

Dr. Timothy Harlow (Scott Hylands): It appears that the alien insect’s venom is rewriting Teal’c’s genetic material. And it happened very quickly in that blood sample.

Teal’c: I’ve felt great pain, O’Neill. But never a sickness such as this. I do not enjoy it.
O’Neill: Nobody does.
Teal’c: I am also feeling something else.
O’Neill: Hey. I’d be scared too.
Teal’c: I do not want to become something other than who I am.

Gutter Punk: Hey, cool tattoo, man. Where’d you get that?
Teal’c: Chulak.
Gutter Punk: Chulak. Where is that, East Side?
Teal’c: Remove yourself from my path.
Gutter Punk: Listen to this guy. I’ll remove myself when you tell me how they do tattoos like that in Chulak.
Teal’c: The skin is cut with an Orac knife. Pure molten gold is pored into the wound.
Gutter Punk: Wow. Don’t it hurt when they do that?
Teal’c: Tremendously. He staggers off.
Ally: That guy’s cool.

Ally: Don’t sweat it.
Teal’c: I can not prevent it.

Ally: Listen, you’re a sitting duck down here.
Teal’c: And ducks are bad?
Ally: Uhh… the sitting kind are.

Ally: This is like… serious alien stuff going on here. If you won’t tell me what to do, I am gonna get the cops. My dad used to know a couple of guys we can trust.
Teal’c: No!
Ally: But look at you! You don’t really want this to happen, do you?

Teal’c: To show my gratitude, I have brought you a new weapon. One with increased range and firepower.
Ally: Wicked! This so cool. Have any time to play?
Jackson: Uh. Actually— Ally shoots Teal’c and runs off. Guess we shouldn’t have loaded it, huh.
Teal’c: How else will she defend herself? he shoots Jackson
How else.

Teal’c: According to Jaffa legend, the Tok’ra are the Goa’uld resistance. Their stated goal is the destruction of the System Lords and a change in the ways of the Empire. They are hunted and despised by the Goa’uld.
O’Neill: Yes. My kind of guys.

Jackson: Wait a minute. You think by form an alliance we mean we want to be hosts?
Garshaw: Well what other sort of alliance would a non-blended human and a Tok’ra want to have?
O’Neill: Well we do have a common enemy. How about friendship?
Carter: We could share information.
Teal’c: We can engage in battle side-by-side.

O’Neill: So we are prisoners. You’re lookin’ like Goa’uld to me.
Garshaw: We’re doing this for your protection as well as ours. Knowledge of our whereabouts makes you and your world a priority target for the System Lords.
O’Neill: We’re already a priority target.
Teal’c: They previously dispatched two motherships to destroy us.

Colonel Maybourne: Teal’c. It’s good to see you well.
Teal’c: In my culture, I would be well within my rights to dismember you.

Teal’c: What is the reason for these padded gloves, O’Neill?
O’Neill: So we don’t hurt each other. I’ll be honest with you, Teal’c. It’s so you don’t hurt me.

A Matter of Time

Carter: Do you know anything about quantum gravity?
Teal’c: Nothing.
Carter: Apparently neither do I.

Hammond: How did it go, Colonel?
Teal’c (in O’Neill): It did not go well, General Hammond.
O’Neill (in Teal’c): Ya think?

Teal’c: The people of Chulak no longer worship you. They no longer fear you. The time of Apophis has come to an end.
Apophis: Then kill me now!

Apophis: There was a time when you would die for me, Teal’c.
Teal’c: That time is no more.

Jackson: Deja vu.
Teal’c: I am unfamiliar with that term.
Jackson: Ah, it means I feel like I’ve been here before.
Teal’c: That is correct, Daniel Jackson. Yesterday. When we first arrived on this planet.
Jackson: Right. What was I thinking.

Carter: We’ve introduced a number of foreign substances that could be responsible.
Dr. Fraiser: Okay, let’s set up over here.
O’Neill: And the UAV ran into that plant thing I showed you.
Jackson: I’ve been sneezing like crazy ever since we got here.
Carter: And I cut my hand and one of the aliens could have come in contact with my blood.
Teal’c: One of the aliens had lubricant from the UAV on its hands.
Dr. Fraiser: Okay, look. The fact is it could be somebody’s aftershave. Now how are they going to react when I try to run some tests?

O’Neill: What’s he smiling at?
Teal’c: He appears to be bothered by the tone you have taken with each other. As have I.

O’Neill: You know, this looks suspiciously like the butt-end of a Titan missile.
Overhead: Standby for test burn in T-minus twenty seconds.
Teal’c: What is a “test burn”?
O’Neill: Just what it sounds like.

O’Neill: How’d you know that would work?
Teal’c: I did not.

Jackson: We’re the first people in human history to go back in time… well, for all we know. If we could figure out how to do this again, just think of what we could do. We could actually visit Babylon. We could, we could— We could see the Great Wall of China being built.
Teal’c: Or prevent regrettable events from your history from ever occurring.
Carter: No. That’s exactly what we can’t do.
O’Neill: Why not?
Carter: Because of the Grandfather Paradox. If you went back fifty years and murdered your own grandfather, your own father would never have been born.
Jackson: So you’re saying that if we change our own past…
Carter: We could change our world in ways we can’t possibly imagine. We might even cease to exist. Along with everything and everyone we know.

Teal’c on hitchhiking: This method appears to be ineffective. {he jumps out of the culvert and stares down a van}
O’Neill: Teal’c? Teal’c! What are you thinking?
Teal’c: That it is effective, O’Neill.

Michael: We’re even thinking of crossing the border up to Canada.
Teal’c: For what reason?
Michael: You know, man. The war.
Teal’c: The war with Canada.
Michael: No.

Dr. Fraiser: It’s okay, it’s okay. You’re in the SGC, Teal’c.
Hammond: Good to have you back, Teal’c.
Teal’c: General Hammond. Where is the rest of SG-1?
Hammond: Good question. We were hoping you could tell us.

Teal’c: General Hammond, I will not remain idle while my friend may be in danger on this planet.
Dr. Fraiser: Teal’c, you’ve been unconscious for three weeks.
Teal’c: That is not possible. My symbiote would have awakened me long before the period of three weeks.
Dr. Fraiser: You were barely alive, Teal’c. You had substantial internal injuries.
Hammond: Dr. Fraiser spent most of the three weeks at your side. I’m convinced it was her refusal to give up that kept you alive.
Teal’c: I am in your debt, Dr. Fraiser.

Teal’c: General Hammond, I hereby respectfully inform you that I must take my leave of the SGC.

Teal’c: I have learned much from you, General Hammond. For that I thank you.
Hammond: I’ve learned a lot from you too, Teal’c. So we’re even on that count. Take care of yourself.