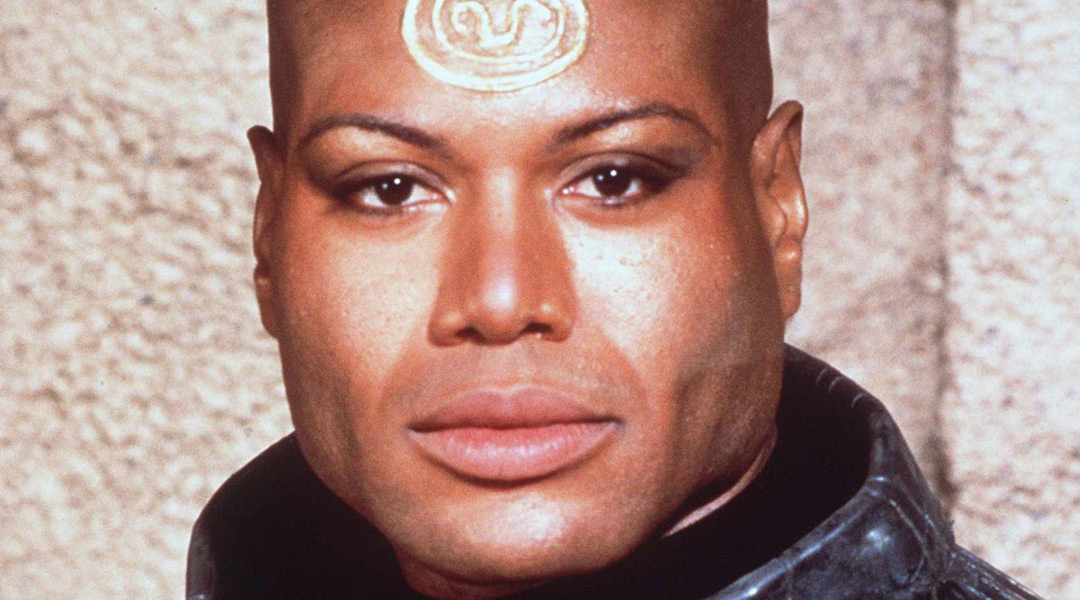 Children of the Gods

O’Neill: I can save these people! Help me! Help me.
Teal’c: Many have said that. But you are the first I believe could do it!

Teal’c: Am I a prisoner?
O’Neill: Uh… yeah.
Teal’c: I understand.
O’Neill: We’re not exactly living up to your expectations of us, are we?

Martin Kennedy (Alan Rachins): These slaves, where do they come from?
Teal’c: There is a tale of a primitive world the Goa’uld discovered Millennia ago. The Tau’ri. First world where forms of this type evolved. It is said the Goa’uld harvested among the primitives. Some became Goa’uld hosts, others became Jaffa. The rest were taken as slaves and seeded among the stars to serve them. That world has been lost for centuries.
Kennedy: Teal’c, beings of this form evolved here on Earth.
Teal’c: This world—
O’Neill: —is the world you’re talking about. Ra came here. If our ancestors hadn’t rebelled and buried the Stargate—
Teal’c: You would have not become strong enough to challenge them.
Kennedy: Then the galaxy is populated by the ancient peoples of Earth.
Hammond: There could be millions by now.
Teal’c: Then you are their greatest hope. And mine.

Teal’c: He was your friend.
O’Neill: My friend died on the table.

Jackson: What a mess.
Teal’c: This temple was destroyed long ago.
O’Neill: Let’s get a move on before we meet somebody who remember why.

Carter: So you think this new anesthesia will be a miracle drug on Earth?
Jackson: Well if it is I bet somebody else will get the credit. We can never say where it came from.
O’Neill: Damn! Guess I’m going to have to cancel that Oprah interview.
Teal’c: What is an “oprah”?

Connor (Roger Cross): The people here, they believe he’s their god.
Teal’c: Because you came through the Stargate.
Connor: No no. You don’t get it. Hanson believes it to.

Teal’c: The perimeter is established. He demonstrates
O’Neill: Perfect. If any little rocks sneak up on us, we’ll have plenty of warning.

Teal’c: This is the Stargate. Here is the temple.
Jamala: Good drawing.
Teal’c: Thank you.

Teal’c: You received permission for me to fire my staff weapon in the gate room?
Carter: Oh yeah.
Jackson: Absolutely.

Hammond: Teal’c, you’ll have to leave that here.
Teal’c: I have seen your world. I will need it.

Thor (as a Norse God hologram):
O’Neill: Teal’c, I think we just got the answering machine.

Unas (James Earl Jones): Jaffa. I am Unas. The First One.
Teal’c: You do not exist.
Unas: Kill the human.
O’Neill: Excuse me?
Unas: And we will feast together.
Teal’c: I no longer serve the Goa’uld.
Unas: We shall see.

The Torment of Tantalus

Jackson: You were calling out something. “Rya’c”. Does that mean anything?
Teal’c: It means nothing.

Teal’c: If we are discovered, you will be brought before Apophis along with us.
O’Neill: We’ll just have to cross that bridge when we come to it.
Bra’tac (Tony Amendola): No. The bridge is too well guarded.
O’Neill: No, actually there I was using a cliche that…

Teal’c: While in the service of Apophis I did many things. For these deeds my victims deserve retribution.
O’Neill: Can we focus on this one case only for now, please?
Teal’c: This case represents the many.
O’Neill: Well it shouldn’t!

Teal’c: Hanno’s father was not the first or the last of those whose lives I have taken. And I have done far worse, O’Neill. I can not give all of their loved ones retribution, but I can at least give it to this one.

Teal’c: We must get to the Stargate.
O’Neill: No argument from me!

Teal’c: This Goa’uld Nirrti, he once sent an emissary of peace to negotiate a treaty concerning a stargate Apophis had taken control of. The negotiation was a ploy. The Stargate was destroyed.
O’Neill: How?
Teal’c: As soon as he entered the Stargate there was a massive explosion.
O’Neill: The girl.

Teal’c: This is knowledge far beyond that of the Goa’uld.
Colonel Mayborne (Tom McBeath): That’s exactly what the President and Joint Chiefs want to hear. Colonel Mayborne, sir. NID.
O’Neill: Intelligence? What happened to Kennedy?
Colonel Mayborne: Promoted. I took his place.
O’Neill: Promoted? Talk about failing upwards.

Teal’c: General, we must ensure the Tollans’ escape.
Hammond: I can’t let you do that. We’d all be court-martialed.
O’Neill: General, I’m about a hair away from not caring.

Hammond: I need to know what went on back there, Teal’c.
Teal’c: We were under fire. Distant. Energy weapons of some kind. Possibly Goa’uld technology.
Hammond: So it’s possible Colonel O’Neill and Captain Carter were struck by enemy fire.
Teal’c: I do not think so. They were but a few meters behind me as I passed through the Gate.

Teal’c: Why are you here?
Jackson: I couldn’t sleep. I was thinking that I must be missing something and now I realized. We ruled out a world that we shouldn’t have.

Jackson: “Beware the destroyers”. That’s what the message said. These are the coordinates the Goa’uld will launch their attack from. It was a warning.
Teal’c: So your vision foretells.
Jackson: No! It wasn’t a vision or a dream or a hallucination. It was real.

Kinsey: Teal’c. With an apostrophe, I understand.

Kinsey: Admittedly these Goa’uld are a dangerous race.
Teal’c: More dangerous than you could possibly know.
Kinsey: If they’re so strong why did you switch sides in the first place?
Teal’c: Because what is right cannot be measured by strength. Your world values freedom. I wish that very same freedom for my people.
Kinsey: I don’t want to appear callous, sir, but I believe that’s your problem. Not ours.
Teal’c: It will soon be yours as well, Senator Kinsey. For the Goa’uld are as powerful as they are evil. The Goa’uld have enslaved a galaxy of worlds.
Kinsey: I don’t care about other worlds. I must place the citizens of this country first.
Teal’c: Then you would be wise to heed our warning, Senator Kinsey. For when the Goa’uld do finally come in force—and then will—your citizens, as the strongest most powerful in this world, will be among the first to die.

Teal’c: I would like to request permission to return through the Stargate before it is permanently sealed. If this world does not intend to continue its struggle against the Goa’uld, then here I do not belong.
O’Neill: I think I’m going with him.
Hammond: I can’t allow that, Colonel. Sorry, but you know that. The President has made it perfectly clear, if we were unable to convince the Senator we would cease operations effective immediately.
Carter: Sir, there are still two SG teams offworld.
Hammond: We’ll keep the light on until they return, but that’s all I’m authorized to do.
O’Neill: So what? That’s it?
Hammond: That’s it, Colonel.
Carter: It can’t be.
O’Neill: With all due respect, sir—
Jackson: With all due respect, sir, the good senator is an ass.
Hammond: He is an elected official of the government we are sworn to serve. Whether we agree or disagree, he’s made his decision. Our commander-in-chief has given us our orders accordingly. I expect you all to carry them out. Dismissed.

Within the Serpent’s Grasp

Carter: Even if it was, how do we know that that address correlates with this reality?
Jackson: Well there’s only one way to find out, isn’t there?
Teal’c: We should enter the coordinates and attempt to open the Gate.

O’Neill: Cool. What are these things?
Teal’c: This is a Goa’uld zat’n’ktel. A weapon using a different form of energy less powerful than that of a staff weapon. Less destructive but still quite deadly.
O’Neill: Sweet. Pass ’em around. What’d you call it?
Teal’c: Zat’n’ktel.
O’Neill: Right. Let’s call it a zat gun.

Jackson: Teal’c, what is this?
Teal’c: It is aGoa’uld long-range visual communication device. Somewhat like your television but much more advanced.
O’Neill: Think it gets Showtime?

Carter: We’re not on a planet, are we?
Teal’c: That is correct. It appears we are on a Goa’uld transport vessel.
Carter: And that jolt was…
Teal’c: Hyper launch.