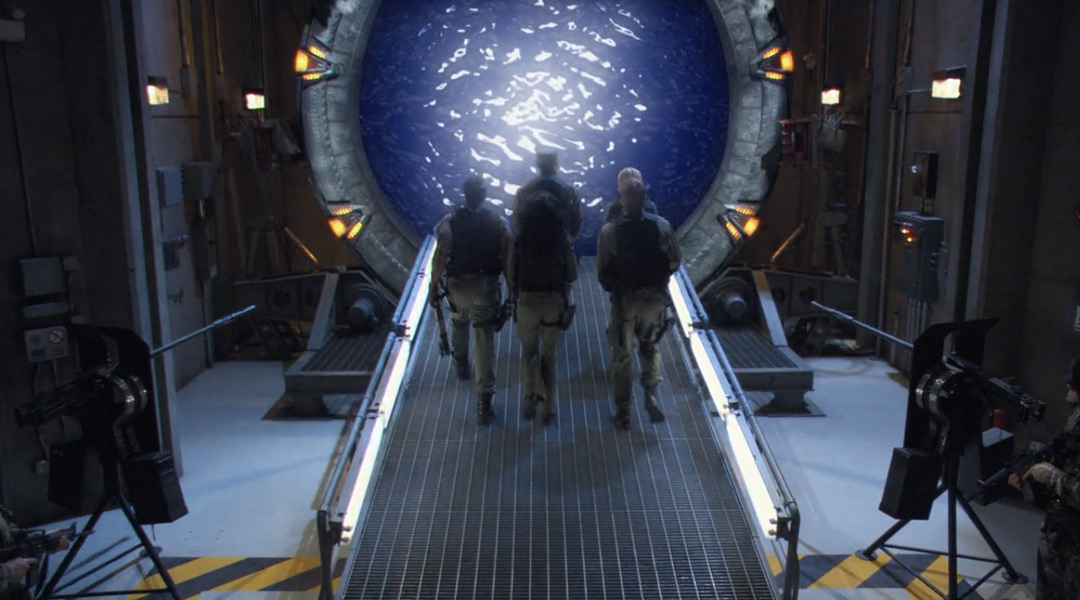 Teal’c: This vessel does not have a pool.
Mitchell: I was talking about the gambling variety.

Jackson: I told you to bring something to amuse yourself. I didn’t mean me. Or the crew.
Vala: They won’t believe that it’s my birthday. Again.
Jackson: Not my problem.
Vala: Being stuck on this ship is worse than being stuck at SGC. I tell you last time I was this bored I took hostages.
Jackson: I was there.

Vala about the Asgard: Out of curiosity, how do you tell the difference?
Jackson: The voice.

Thor: General, with your permission a number of Asgard are prepared to beam aboard immediately, to begin installing various technological upgrades to the ship.
Mitchell: I hope it’s rayguns. I’ve got rayguns in the pool.
Landry: What is it you’re planning on giving us?
Thor: Everything we have.

Jackson: Why are you doing this? You always resisted in the past, you always said we weren’t ready.
Thor: Indeed. Many Asgard still believe that.
Mitchell: So what’s changed?
Thor: As a race, we are dying. Very soon we will all be gone.

Teal’c: So everything they’ve installed on this ship?
Jackson: Is going to be their legacy.

Carter: I promise we will do our very best not to let you down.
Thor: You are the Fifth Race. Your role is clear. If there is any hope in preserving the future, it lies with you and your people.
Carter: No pressure, huh?
Thor: You have earned my respect and my friendship.
Carter: The feeling’s mutual.

Jackson: We can’t sacrifice the knowledgebase of the Asgards. They trusted us with their legacy.

Mitchell: I’ve said it before, I am all for fighting to the death. But we need a plan. Preferably one that avoids the “to the death” part.

Carter: Thanks to the Asgard technology, we are in a time dilation bubble. While time may appear to be passing at a normal rate for us, in fact years will pass inside the bubble while only fractions of a second pass outside the field.
Landry: You won’t need that much time I hope.
Carter: Hopefully not.

Vala to Jackson: I’m gonna go crazy. And I’m taking you with me.

Mitchell: Are you saying it took two weeks to figure out this idea wouldn’t work?

Vala: We’ve been here three months, Daniel. Three. Months. You do like girls?
Jackson: Yes!
Vala: Well I don’t see many other options around here, do you? Unless you really don’t find me attractive.
Jackson: Do you want an honest answer to this question?
Vala: No.

Mitchell: Come on, sir. It’s like a bad joke. We have stranded ourselves here trying to save something we can’t use.
Landry: I’m not having this conversation again.

Mitchell: See what we need is, we need Superman to fly around the ship really really fast.
Carter: If you only knew how ridiculous that sounds.
Mitchell: It only sounds ridiculous until you hear yourself say, “I am trapped on a spaceship stuck in a time dilation field.”

Mitchell:This is not flying, this is standing still. This is the Love Boat without the buffet and the band. Besides I only liked flying so much because I didn’t know about the Stargate.

Carter: I did it.

Carter: I create the field to buy us more time. I finally figure out how to undo it all and that extra time is what makes it impossible.

Vala: Fifty or sixty years? Something interesting must have happened. Obviously I hooked up with someone. Was it you, Muscles? Can’t be Mitchell, can it? General Landry?

Carter: You know, as hard as it is for us not knowing, it must be torture for you not to tell us.
Teal’c: Indeed.