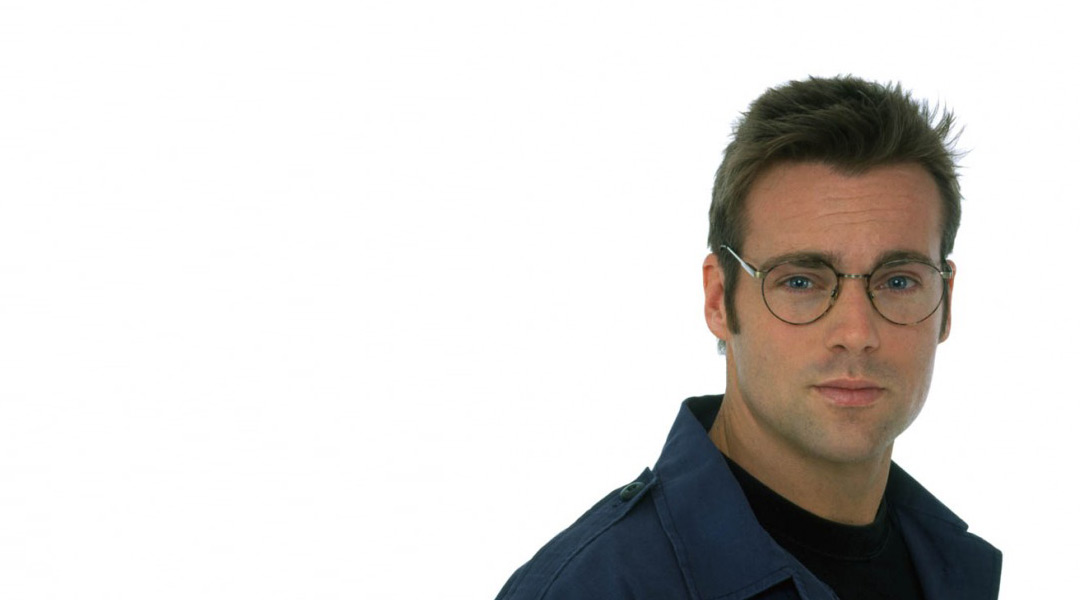 Jackson: My point is that I’m sure you did your best.
O’Neill: Apparently it wasn’t good enough.

Hammond: Master Bra’tac, before we proceed—
Bra’tac: We waste time!
Hammond: Please explain to me what you hope to achieve by depriving Teal’c of his symbiote.
Bra’tac: I hope to save him.
Jackson: By killing him.
Bra’tac: If necessary.
O’Neill: See. I think we disagree on the meaning of the word “save.”

Bra’tac: The Rite of Mal Sharran is the only way.
Jackson: Last Rite.
Bra’tac: To save Teal’c’s soul, first we must take him to the very threshold of death.

Jackson: Woman? Did he just call me a woman?
O’Neill: Yes, I believe he did.

Carter: So is it working? Has he said anything?
O’Neill: He talked about fabric. Briefly.
Jackson: He just called me a woman.
O’Neill: So I think it’s working.

O’Neill: How long?
For what?
O’Neill: All of it. How long?
Jackson: Uh well. Days. Weeks. Months, maybe, of meticulous, tedious boring… you know, tediousness. Ah… I could just keeping working now. By lunch at least.

Colonel Simmons (John de Lancie): Need I remind you, Dr. Jackson, the dangers that we’re trying to defend Earth against?
Jackson: Oh, could you? I mean, go slow.

Hammond: Report, Major.
Carter: We were attacked by several Jaffa. Lieutenant Tyler went down covering our six and Colonel O’Neill went back for him.
Teal’c: We must assemble a rescue team and return to the planet immediately, General Hammond.
Hammond: Hold on. Who’s Lieutenant Tyler?
Jackson: What do you mean, “Who’s Lieutenant Tyler”? He’s a member of SG-1.
Hammond: What?
Jackson: You assigned him yourself last month, sir.
Carter: Tyler, sir. We’ve been training him for weeks. This was his third mission.
Hammond: Major I have no idea what you’re talking about.

O’Neill: Where’s Tyler?
Jackson: You know, I would have asked him. But I was too busy being unconscious after he shot me with that zat you gave him, so…

Jackson about Nirrti: The rings in the lab. That wasn’t me, that was her.

Carter: Sir, I don’t have to remind you what Cassandra has gone through because of the Goa’uld. Now if we’re going to put what we may learn or what might happen over her life—
O’Neill: It’s time to pack it in.
Jackson: I agree.

Jackson: These men, whoever they are, abducted the unas I refer to as Chaka.
Carter: That’s the one that kidnapped you.
Jackson: Same one.
Jackson: Their dress indicates pre-industrialization, but they don’t seem to have any Jaffa tattoos, so the presence of Goa’uld weaponry seem contradictory.
Teal’c: Indeed.

Jackson: I left the bait for their trap.

O’Neill: Any ideas?
Jackson: Well let’s see how far honesty gets us.
O’Neill not so sure: Okay.

O’Neill: Daniel, do you want to go out and catch a couple of unas? Trade them for Chaka, is that it?
Jackson: I think you’re missing the point.
O’Neill: Am I?

Jackson: Well actually that means a lot of different things. In this particular case, I’d say, “Thank you for trying to free me. Sorry for getting you into this mess.”

Jackson: Jack, it’s not his fault.
O’Neill: Daniel, I’m chained up in a mad man’s barn with a bunch of unas. Who’s to blame is not at the top of my list of concerns… just yet.

O’Neill: You just sent them out to start a war.
Jackson: Well, it was his choice. I told them they didn’t have to kill.
O’Neill: You think he understands that?
Jackson: They know what freedom is, and they are willing to fight for it. They deserve a chance.

O’Neill: How hard could it be?
Jackson: It’s a dead language. I doubt anyone’s even stood here for three thousands years.
Carter: I wouldn’t be too sure about that.
O’Neill: Whatcha got there?
Carter: Empty pack of cigarettes. In Russian.

Jackson: If they went through the Gate before everyone at the Russian base was killed they could still be out there.
Carter: It’s doubtful they would have survived this long. The planet’s surface temperature averages 135 degrees fahrenheit in the shade.
O’Neill: Shade? I don’t remember shade.

Jackson: If these men disappeared ten months ago, how could one of the bodies decompose that fast?
Carter: It didn’t decompose. This skeleton’s covered in tiny teeth marks.
O’Neill: Something ate this guy?

Jackson: Shouldn’t we open this first, make sure no one’s home?

Carter: Whatever killed the Russian soldier killed the Goa’uld as well.
O’Neill: How’d it get in there?
Carter: I don’t know.
Jackson: Better question is, where is it now?

O’Neill: This was supposed to be a rescue mission.
Teal’c: It would appear there is no one left to rescue.
Jackson: I wouldn’t say that.

Narim: Counselor Omoc was well aware that he had very few true friends. He was not concerned with trivial relationships. In his testament, he asked that his memorial be attended only by those whom he respected.
Jackson: Uh, no offense, but what are we doing here?
Narim: He may not have shown you much warmth or affection, but I can tell you Omoc had a great deal of reverence for all of you.

Hammond: Your initial reports said the Volians were a simple agrarian society.
O’Neill: That they are.
Jackson: They Volians introduced to another race. Friends of theirs.
O’Neill: Who, while lacking a sense of humor, make up for it in advanced technology.

Teal’c: Have you discovered something, Daniel Jackson?
Jackson: Oh god, I hope not. Probably though.

Jackson: So you think Maybourne’s a fan of Gozilla movies?
O’Neill: Eh, he strikes me more as a Mothra guy.
Jackson: I don’t get it.
O’Neill: NID agents use these sites to post coded messages. If I know Maybourne, he’s keeping tabs on his old buddies.
Jackson: Okay, what kind of message do you want to send?
O’Neill: Make it, “Hutch, we need to talk.” Sign it Starsky. He’ll understand.

Jackson: I said I just electrocuted myself. Do you have any idea what that feels like?
Guard: No. {Daniel zats him}
Jackson: Something like that.

Jackson: Well that looked… familiar.
O’Neill: I don’t see it.

Jackson: Why would somebody with two PhDs become a teamster?
Carter: For the money I guess.

Elliot: Looks like their leader is Dr. Jackson.
O’Neill: I always knew he wanted that office.

Hammond: So the Tok’ra intel was right. The Goa’ulds were scouting P3X-116 for a new base.
Jackson: Looks that way. What the Tok’ra didn’t tell us is that the Goa’uld in question was Tanith.

Carter: The error we’re receiving from the Gate seems to indicate that there is still an energy pattern stored in the memory buffer.
Jackson: Teal’c.
Carter: If the al’kesh crashed into the DHD on the other planet, it woul have cut off power to the outgoing Gate. The wormhole would have been severed prematurely. Now if that happened before our Gate was able to reconvert Teal’c’s energy signature back into matter…
Hammond: Teal’c is in our Stargate.
Carter: His energy signature, yes. Stored in the memory.
Jackson: Well let’s get him out.
Carter: Right now I’m not sure how. That’s not the worst problem.
Jackson: There’s worse?

Carter: Is there any chance you could get the Russians to give us their DHD?
Jackson: Not without giving back Alaska.

Jackson: What would it take to give us your DHD? No seriosuly. Let’s put it on the table.

Jackson: Well that never happened in any of the simulations.

Jackson: So how are you gonna get me in?
Jacob: Yu will be among the System Lords attending.
Carter: I thought you said he was going in as a slave.
Jacob: The System Lord Yu.
Carter: Little joke there.
O’Neill: Funny!

Jacob: All you have to do is prick him. Once. The effect will be immediate. He’ll believe you to be his loyal slave Jerren.
Jackson: Jerren?
Jacob: Just don’t jab yourself with it.
Jackson: Why?
Jacob: Actually I don’t know exactly. That in itself should scare you.

Yu: Olokon is still seething over a recent loss to my forces. He may try to kill you out of spite. Do not make me look foolish by allowing yourself to be murdered.
Jackson: Yes, my Lord.

Osiris: Daniel Jackson. You’re a rather long way from home, aren’t you?

Jackson: Hey, here’s a question for you. Why do you think the Goa’uld are allowing their human slaves to hear everything that’s going on?
Jacob: I’m not sure. The truth is we suspected they were going to kill the slaves when the summit was done.
Jackson: And you didn’t think that was important enough to tell me?
Jacob: Not considering that you were going to kill all the Goa’ulds.
Jackson: I’m not doing that anymore.
Jacob: True. What’s your point?
Jackson: There’s a big vat of live symbiotes here.

Jackson: Well one of our allies will help.
Carter: I hope you’re right. Otherwise in eleven days and sixteen hours, all life on Earth will be wiped out.

O’Neill: …and after that I kind of lost my temper.
Hammond: What exactly does that mean?
Jackson: Let’s just say Jack made a reference to Freyr’s mother.
Hammond: We’ll discuss your diplomatic shortcomings later.

Carter: Sublight drive is down.
Teal’c: As are shields and communication.
Jackson: A lot easier to list what is working.
O’Neill: Bomb?
Carter: It’s good to go, sir. If it comes right down to it, we can detonate it right here. What’s our position?
Jackson: Well, personally, I’m against it. If you want to know where the ship is, we’re about five meters above the surface at the bottom of the crater.

O’Neill: You wanna ride an asteroid through Earth?
Jackson: Yeah.

Jackson: I don’t think she knows she’s a robot.
O’Neill: Okay, how is that possible?
Jackson: Well the last time your consciousness was copied into a robot you didn’t figure it out right away.

Hammond: Dr. Jackson, what have you learned?
Jackson: Well actually not much, sir. She’s kind of hard to pin down on
our conversation. Her attention wanders. It’s like she has the mind of a child. {everyone looks at Jack}.
O’Neill not paying attention: What?

Reese (Danielle Nicolet): I want to have fun. Don’t you ever have fun?
Jackson: Not as much as I’d like to.

O’Neill: The rat bastard.
Jackson: I thought he came across as very nice.
O’Neill: The voice behind the camera.

Lt. Kershaw: I feel better just knowing there’s an archaeologist watching our backs.
Jackson: Yeah, which end do the bullets go in again?
Col. Grieves: I’ll be happy to show you.
O’Neill: Our mission objective is to fix whatever you screwed up. If you get any ideas other than that, I’ll shoot you. Understood?

Jackson: Just out of curiosity, how many years did you promise to take off their sentence if they managed to fix this?
O’Neill: Actually they’ll get a few more years out of this.
Jackson: More?
O’Neill: They were on Death Row.

Jackson: I’m gonna miss you guys.
O’Neill: Yeah. Me too.