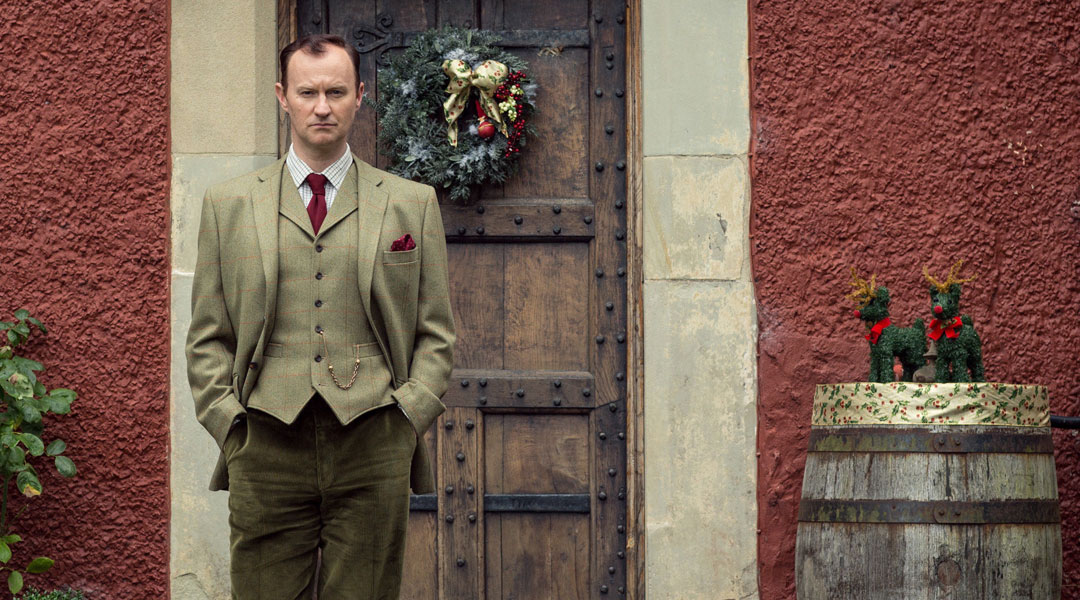 Captor/Mycroft Holmes (Mark Gatiss): So, my friend. Now it’s just you and me. You have no idea the trouble it took to find you. in English: Now listen to me, there’s an underground terrorist network active in London, and a massive attack is imminent. Sorry, but the holiday is over. Brother dear. Back to Baker Street, Sherlock Holmes.

Mycroft: You have been busy, haven’t you? Quite the busy little bee.
Sherlock: Moriarty’s network. Took me two years to dismantle it.
Mycroft: And you’re confident you have?
Sherlock: The Serbian site was the last piece of the puzzle.
Mycroft: Yes. You got yourself in deep there with Baron Maupertuis. Quite a scheme.
Sherlock: Colossal.
Mycroft: Anyway, you’re safe now.
Sherlock: Hm.
Mycroft: Small thank you wouldn’t go amiss.
Sherlock: What for?
Mycroft: For wading in. In case you’ve forgotten, field work is not my natural milieu.
Sherlock: Wading in? You sat down, watched me being beaten to a pulp!
Mycroft: I got you out.
Sherlock: No, I got me out. Why didn’t you intervene sooner?
Mycroft: I couldn’t risk giving myself away, could I? It would have ruined everything.
Sherlock: You were enjoying it.
Mycroft: Nonsense.
Sherlock: Definitely enjoying it.

Agent: One of our men died getting this information. All the traffic, all the chatter concurs. There’s going to be a terror strike on London. A big one.
Sherlock: And what about John Watson?
Mycroft: John?
Sherlock: Have you seen him?
Mycroft: Oh yes. We meet up every Friday for fish and chips. {handing him a dossier} I’ve kept a weather eye on him, of course. We haven’t been in touch at all to… prepare him.
Sherlock seeing Watson’s new look: Oh no. Well we’ll have to get rid of that.
Mycroft: We?
Sherlock: He looks ancient. I can’t be seen to be wandering around with an old man.

Sherlock: I think I’ll surprise John. He’ll be delighted.
Mycroft: You think so?
Sherlock: Hm. Pop into Baker Street. Who knows, jump out of a cake.
Mycroft: Baker Street? He isn’t there anymore. Why would he be? It’s been two years. He’s got on with his life.
Sherlock: What life? I’ve been away.

Sherlock: Where’s he going to be tonight?
Mycroft: How would I know?
Sherlock: You always know.
Mycroft: He has a dinner reservation in the Marylebone Road.
Nice little spot. They have a few bottles of the 2000 Saint-Emilion, though I prefer the 2001.
Sherlock: I think maybe I’ll just drop by.
Mycroft: You know, it is just possible that you won’t be welcome.
Sherlock: No it isn’t.

Sherlock: Now. Where is it?
Mycroft: Where’s what?
Sherlock: You know what.
Agent bringing in his coat: Welcome back, Mr. Holmes.
Sherlock: Thank you. {to Mycroft} Blad.

Mycroft: All very interesting, Sherlock. But the terror alert has been raised to critical.
Sherlock: Boring. Your move.
Mycroft: We have solid information. An attack is coming.
Sherlock: Solid information. A secret terrorist organization’s planning an attack. That’s what secret terrorist organizations do, isn’t it? It’s their version of golf.
Mycroft: An agent gave his life to tell us that.
Sherlock: Hm. Perhaps he shouldn’t have done. He was obviously just trying to show off.
Mycroft: None of these markers of yours is behaving in any way suspiciously? Your move.
Sherlock: No, Mycroft. But you have to trust me. I’ll find the answer. But it’ll be in an odd phrase in an online blog, or an unexpected trip to the countryside. Or a misplaced Lonely Hearts ad. Your move.
Mycroft: I’ve given the Prime Minister my personal assurance you’re on the case.
Sherlock: I am on the case. We’re both on the case. Look at us right now. {the Operation buzzer sounds}
Mycroft: Oh bugger!
Sherlock: Oopsie. Can’t handle a broken heart. How very telling.
Mycroft: Don’t be smart.
Sherlock: That takes me back. “Don’t be smart, Sherlock. I’m the smart one.”
Mycroft: I am the smart one.
Sherlock: I used to think I was an idiot.
Mycroft: Both of us thought you were an idiot, Sherlock.

Mycroft: Why are we playing games?
Sherlock: London’s terror alert has been raised to critical. I’m just passing the time. Let’s do deductions. A client left this while I was out. What do you reckon? {he tosses Mycroft a hat}
Mycroft: I’m busy.
Sherlock: Oh go on, it’s been an age.
Mycroft: I always win.
Sherlock: Which is why you can’t resist.
Mycroft: I find nothing irresistible in the hat of a well-travelled, anxious, sentimental, unfit creature of habit with appalling halitosis. {pause} Damn.
Sherlock: Isolated too, don’t you think?
Mycroft: Why would he be isolated?
Sherlock: He?
Mycroft: Obviously.
Sherlock: Why? Size of the hat?
Mycroft: Don’t be silly. Some women have large heads too. No, he’s recently had his hair cut. You can see the little hairs adhering to the perspiration stains on the inside.
Sherlock: Some women have short hair too.
Mycroft: Balance of probability.
Sherlock: Not that you’ve ever spoken to a woman with short-haired or, you know, a woman.
Mycroft: Stains show he’s out of condition. He’s sentimental because the hat has been repaired three, four–
Sherlock: Five times. Very neatly. The cost of the repairs exceeds the cost of the hat so he’s mawkishly attached to it. But it’s more than that. One, perhaps two patches would indicate sentimentality. But five? Five’s obsessive behavior. Obsessive-compulsive.
Mycroft: Hardly. Your client left it behind. What sort of an obsessive-compulsive would do that? The earlier patches are extensively sun-bleached, so he’s worn it abroad. In Peru.
Sherlock: Peru?
Mycroft: This is a chullo. The classic headgear of the Andes. It’s made of Alpaca.
Sherlock: Nope.
Mycroft: No?
Sherlock: Icelandic sheep wool. Similar, but very distinctive if you know what you’re looking for. I’ve written a blog on the varying tensile strengths of different natural fibers.
Mrs. Hudson: I’m sure there’s a crying need for that.
Sherlock: You said he was anxious.
Mycroft: The bobble on the left side has been badly chewed. Which shows he’s a man of a nervous disposition.
Sherlock: But also a creature of habit because he hasn’t chewed the bobble on the right.
Mycroft: Precisely.
Sherlock: Brief sniff of the offending bobble tells us everything we need to know about the state of his breath. Brilliant.
Mycroft: Elementary.
Sherlock: But you’ve missed his isolation.
Mycroft: I don’t see it.
Sherlock: Plain as day.
Mycroft: Where?
Sherlock: There for all to see.
Mycroft: Tell me.
Sherlock: Plain as the nose on your–
Mycroft: Tell me!
Sherlock: Well anybody who wears a hat as stupid as this isn’t in the habit of hanging around other people, is he?
Mycroft: Not at all. Maybe he just doesn’t mind being different. He doesn’t necessarily have to be isolated.
Sherlock: Exactly.
Mycroft: I’m sorry?
Sherlock: He’s different, so what? Why would he mind. You’re quite right. Why would anyone mind?
Mycroft: I’m not lonely, Sherlock.
Sherlock: How would you know?
Mycroft: Yes. Back to work, if you don’t mind.

Mycroft Holmes (Mark Gatiss): So this is it then. The big day. I suppose I’ll be seeing a lot more of you from now on.
Sherlock: What do you mean?
Mycroft: It’ll be just like old times.
Sherlock: I don’t understand.
Mycroft: Well it’s the end of an era, isn’t it? John and Mary. Domestic bliss.

Mycroft: Oh by the way, Sherlock. Do you remember Red Beard?
Sherlock: I’m not a child anymore, Mycroft.
Mycroft: No, of course you’re not. Enjoy not getting involved, Sherlock.

Mycroft: Oh Sherlock. What do we say about coincidences?
Sherlock: “The universe is rarely so lazy.”

Mycroft: Well then, Sherlock. Back on the sauce?
Sherlock: What are you doing here?
Watson: I phoned him.
Mycroft: The siren call of old habits. How very like Uncle Rudy. Though in many ways cross dressing would have been a wiser path for you.
Sherlock: You phoned him.
Watson: Of course I bloody phoned him.
Mycroft: ‘Course he bloody did. Now, save me a little time. Where should we be looking?
Sherlock: We?
Philip Anderson (Jonathan Aris): Mr. Holmes!
Sherlock: For God’s sake!

Mycroft: Magnussen is not your business.
Sherlock: Oh you mean he’s yours?
Mycroft: You may consider him under my protection.
Sherlock: I consider you under his thumb.
Mycroft: If you go against Magnussen, then you will find yourself going against me.
Sherlock: Okay. I’ll let you know if I notice.

Mycroft: Oh dear god it’s only two o’clock. It’s been Christmas Day for at least a week now. How can it only be two o’clock? I am in agony.
Mrs. Holmes: Mikey, is this your laptop?
Mycroft: Upon which depends the security of the free world, yes. And you’ve got potatoes on it.