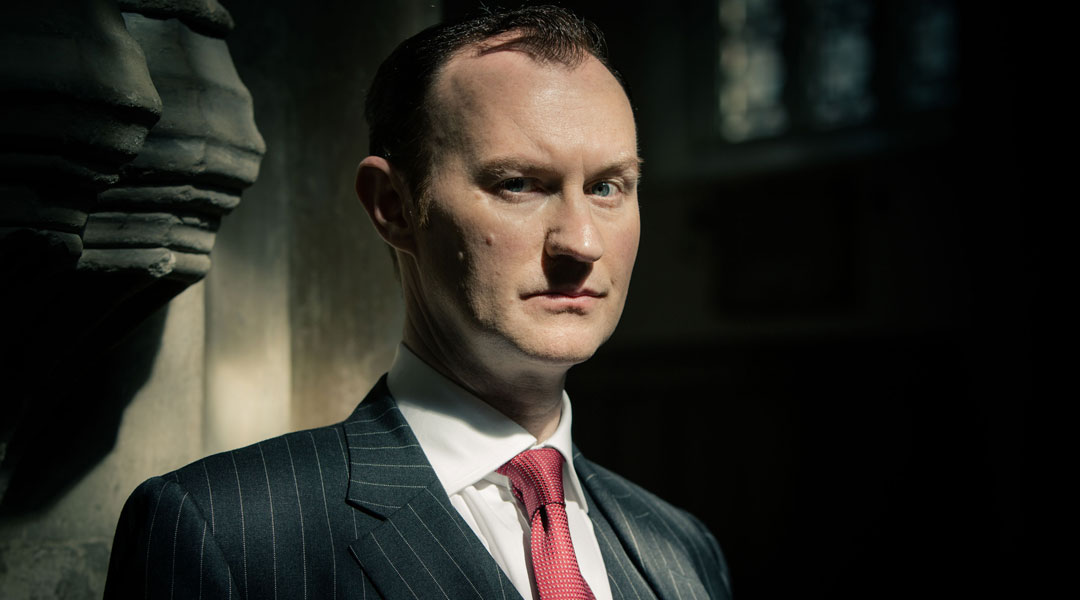 A Study in Pink

Mysterious Gentleman: Time to choose a side, Dr. Watson.

Mycroft Holmes (Mark Gatiss): So. Another case cracked. How very public spirited. Though that’s never really your motivation, is it.
Sherlock: What are you doing here?
Mycroft Holmes: As ever, I’m concerned about you.
Sherlock: Yes, I’ve been hearing about your concern.
Mycroft Holmes: Always so aggressive. Didn’t it ever occur to you that you and I belong on the same side?
Sherlock: Oddly enough, no.
Mycroft Holmes: We have more in common than you like to believe. This petty feud between us is simply childish. People will suffer. And you know how it always upset Mummy.
Sherlock: I upset her? Me? It wasn’t me that upset her, Mycroft!
Watson: No. No, wait. Mummy, who’s “Mummy”.
Sherlock: Mother. Our mother. This is my brother Mycroft. Putting on weight again?
Mycroft Holmes: Losing it. In fact.
Watson: He’s your brother?
Sherlock: Of course he’s my brother.
Watson: So he’s not—
Sherlock: Not what?
Watson: I don’t know, criminal mastermind.
Sherlock: Close enough.
Mycroft Holmes: For goodness sake. I occupy a minor position in the British government.
Sherlock: He is the British government. When he’s not too busy being the British Secret Service or the CIA on a freelance basis. Good evening Mycroft. Try not to start a war before I get home, you know what it does for the traffic.

Watson: So when you say you’re concerned about him, you actually are concerned.
Mycroft Holmes: Yes of course.
Watson: I mean, it actually is a childish feud?
Mycroft Holmes: He’s always been so resentful. You can imagine the Christmas dinners.
Watson: Yeah. {realizing}. No. God no.

Mycroft: Interesting, that soldier fellow. He could be the making of my brother. Or make him worse than ever. Either way we’d better upgrade their surveillance status. Grade 3. Active.
Anthea: Sorry sir, who’s status?
Mycroft: Sherlock Holmes and Dr. Watson.

Sherlock: I can’t.
Mycroft: Can’t?
Sherlock: The stuff I’ve got on is just too big. I can’t spare the time.
Mycroft: Never mind your usual trivia. This is of national importance.
Sherlock: How’s the diet?
Mycroft: Fine. Perhaps you can get through to him, John.
Watson: What?
Mycroft: I’m afraid my brother can be very intransigent.
Sherlock: If you’re so keen why don’t you investigate it?
Mycroft: No no no. I can’t possibly be away from the office for any length of time. Not with the Korean elections so— {they stop} Well, you don’t need to know about that, do you. Besides, a case like this, it requires… legwork.

Sherlock: How’s Sarah, John? How was the lilo?
Mycroft: Sofa, Sherlock. It was the sofa.
Sherlock: Oh yes, of course.
Watson: How— Oh never mind.

Mycroft: Sherlock’s business seems to be booming since you and he became pals. What’s he like to live with? Hellish, I would imagine.
Watson: I’m never bored.
Mycroft: Good. That’s good, isn’t it.

Mycroft: Andrew West. Known as Westie to his friends. Civil servant. Found dead on the tracks at Battersea Station this morning with his head smashed in.
Watson: Jumped in front of a train?
Mycroft: It seems the logical assumption.
Watson: But…
Mycroft: But?
Watson: Well you wouldn’t be here if it was just an accident.
Mycroft: The MOD is working on a new missile defense system. The Bruce-Partington Program, it’s called. The plans for it were on a memory stick.
Watson: That wasn’t very clever.
Mycroft: It’s not the only copy. But it is secret. And missing.
Watson: Top secret?
Mycroft: Very. We think West must have taken the memory stick. We can’t possibly risk it falling into the wrong hands. You’ve got to find those plans, Sherlock. Don’t make me order you.
Sherlock: I’d like to see you try.
Mycroft: Think it over. Goodbye, John. See you very soon.

Mycroft: John. How nice. I was hoping it wouldn’t be long. How can I help you?

Watson: He was found at Battersea, yes? So he got off the train.
Mycroft: No.
Watson: What?
Mycroft: He had an oyster card. But it hadn’t been used.
Watson: He must have bought a ticket.
Mycroft: There was no ticket on the body.
Watson: Then how—
Mycroft: Then how did he end up with a bashed-in brain on the tracks of Battersea. That is the question. The one I was rather hoping Sherlock would provide an answer to. How’s he getting on?
Watson: He’s fine. And it is going very well. You know, he’s completely focused on it.