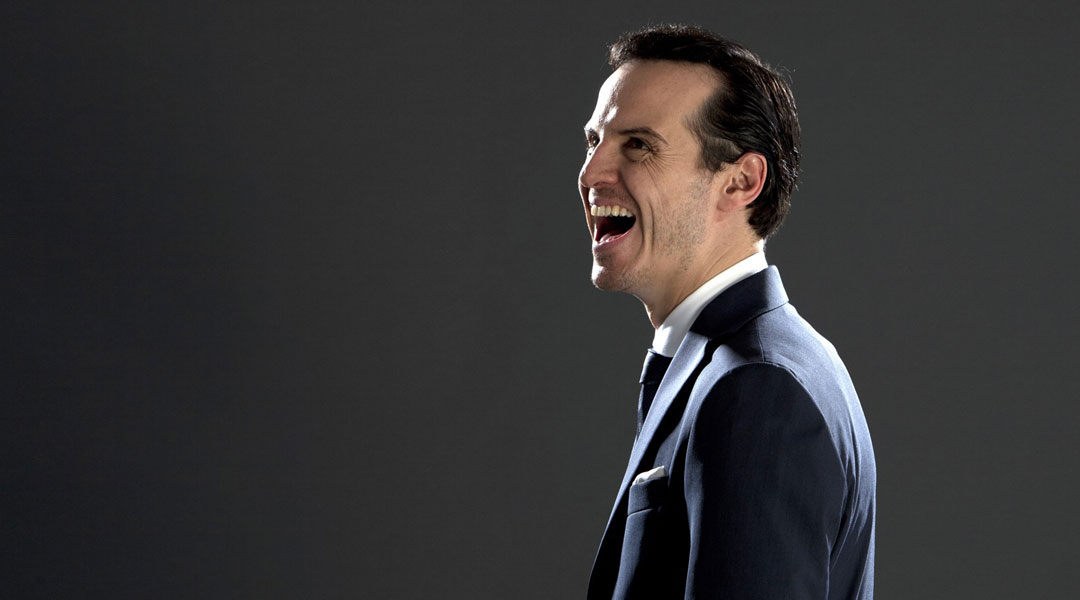 General Shan: Without you—without your assistance—we would not have found passage into London. You have my thanks.
M: Gratitude is meaningless. It is only the expectation of further favours.
General Shan: We did not anticipate. We did not know this man would come. This Sherlock Holmes. And now your safety is compromised.
M: They cannot trace this back to me.
General Shan: I will not reveal your identity.
M: I am certain.

Molly: Jim, this is Sherlock Holmes.
Jim from IT: Ah!
Molly: And uh… Sorry?
Watson: John Watson, hi.
Jim from IT: Hi. So you’re Sherlock Holmes. Molly’s told me all about you. Are you on one of your cases?
Molly: Jim works in IT upstairs. That’s how we met. Office romance.
Sherlock: Gay.
Molly: Sorry, what?
Sherlock: Nothing. Um, hey.
Jim from IT upending a pan: Sorry! Sorry! Well I better be off. I’ll see you at the Fox. About six-ish?
Molly: Yeah.
Jim from IT: Bye. It was nice to meet you.
Watson: You too.

Sherlock: You’ve stolen another voice I presume.
Bomber: This is about you and me.
Sherlock: Who are you? What’s that noise?
Bomber: The sound of life, Sherlock. But don’t worry. I can soon fix that. You solved my last puzzle in nine hours. This time you have eight.

Bomber: The clue’s in the name: Janus Cars.
Sherlock: Why would you be giving me a clue?
Bomber: Why does anyone do anything? Because I’m bored. We were meant for each other, Sherlock.
Sherlock: Then talk to me in your own voice.
Bomber: Patience.

Bomber: This one is a bit defective. Sorry. She’s blind. This is a funny one. I’ll give you twelve hours.
Sherlock: Why are you doing this?
Bomber: I like to watch you dance.

Sherlock: Brought you a little “getting to know you” present. Oh, that’s what it’s all been for isn’t it? All your little puzzles, making me dance. All to distract me from this.
Watson walking out: Evening. This is a turn up, isn’t it, Sherlock?
Sherlock: John. What the hell?
Watson: Bet you never saw this coming. What would you like me to make him say next? Gottle o’ geer. Gottle o’ Geer. Gottle o’ g—
Sherlock: Stop it.
Watson: Nice touch this, the pool. Where little Carl died. I stopped him. I can stop John Watson too. Stop his heart.
Sherlock: Who are you?
Jim Moriarty (Andrew Scott) appearing across the pool: I gave you my number. I thought you might call. Is that a British Army Browning L9A1 in your pocket? Or are you just pleased to see me?
Sherlock: Both.
Moriarty: Jim Moriarty. Hi. {no reaction}. Jim? Jim from the hospital? Huh. Did I really make such a fleeting impression? But then I suppose that was rather the point. Don’t be silly. Someone else is holding the rifle. I don’t like getting my hands dirty. I’ve given you a glimpse, Sherlock—just a teensy glimpse—of what I’ve got going on out there in the big bad world. I’m a specialist, you see. Like you.
Sherlock: “Dear Jim, Please will you fix it for me to get rid of my lover’s nasty sister.” “Dear Jim, Please will you fix it for me to disappear to South America.”
Moriarty: Just so.
Sherlock: Consulting criminal. Brilliant.
Moriarty: Isn’t it? No one ever gets to me. And no one ever will.
Sherlock: I did.
Moriarty: You’ve come the closest. Now you’re in my way.
Sherlock: Thank you.
Moriarty: Didn’t mean it as a compliment.
Sherlock: Yes you did.
Moriarty: Yeah, okay, I did. But the flirting’s over, Sherlock. {sing song} Daddy’s had enough now! I’ve shown you what I can do. I’ve cut loose all those people, all those little problems. Even thirty million quid just to get you to come out and play. So take this as a friendly warning, my dear. Back off. Although. I have loved this. This little game of ours. Playing Jim from IT. Playing gay. Did you like the little touch with the underwear?
Sherlock: People have died.
Moriarty: That’s what people DO!
Sherlock: I will stop you.
Moriarty: No you won’t.
Holmes to Watson: You all right?
Moriarty: You can talk, Johnny Boy. Go ahead.
Holmes offering the memory stick: Take it.
Moriarty: Hm? Oh, that. The missile plans. {kisses the memory stick}. Boring! I could have got them anywhere. {he tosses it in the pool}.
Watson grabbing Moriarty: Sherlock run!
Moriarty: Oh! Good. Very good.
Watson: Just like that. Pull that trigger, Mr. Moriarty, and we both go up.
Moriarty: He’s sweet, I can see why you like having him around. But then people do get so sentimental about their pets. They’re so touching and loyal. But oops! You’ve rather shown your hand there, Dr. Watson. Gotcha!

Moriarty unruffling his suit: Westwood. Do you know what happens if you don’t leave me alone, Sherlock? To you.
Sherlock: Oh let me guess, I get killed.
Moriarty: Kill you? Eh, no. Don’t be obvious. I mean I’m going to kill you anyway someday. I don’t want to rush it though. I’m saving it up for something special. No no no no. If you don’t stop prying I will burn you. I will burn the heart out of you.
Sherlock: I have been reliably informed that I don’t have one.
Moriarty: But we both know that’s not quite true. Well. I’d better be off. So nice to have had a proper chat.
Sherlock: What if I was to shoot you now? Right now.
Moriarty: Then you could cherish the look of surprise on my face. Because I’d be surprised, Sherlock. Really I would. And just a teensy bit disappointed. And of course you wouldn’t be able to cherish it for very long. Ciao, Sherlock Holmes.
Sherlock: Catch you… later.
Moriarty: No you won’t!

Moriarty: Sorry boys! I’m soooo changeable! It is a weakness with me. But to be fair to myself, it is my only weakness. You can’t be allowed to continue. You just can’t. I would try to convince you. Everything I have to say has already crossed your mind.
Sherlock: Probably my answer has crossed yours. {He aims the gun at Moriarty and then down to the bomb-laden jacket}…